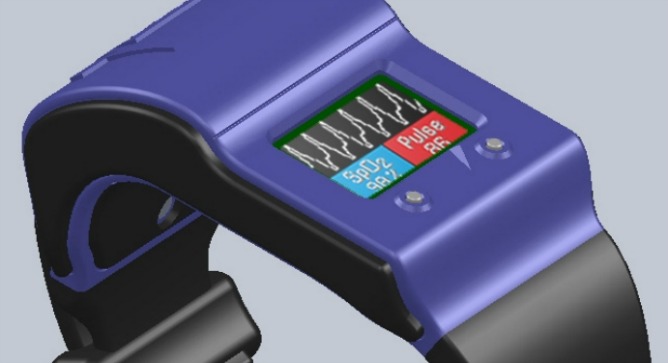 A prototype of the Oxitone device, heading to market in about 18 months.

About half of all people at risk of death from heart attacks could gain the chance to live, once Israeli entrepreneur Leon Eisen’s new Oxitone device goes to market in about 18 months.

Using two optical sensors, and another special high-tech tool, he’s developed the world’s first “watch” that can just about tell when your time may be up.

It’s no joke: Oxitone was developed to cheat fate.

Eisen tells ISRAEL21c that about half of the people who die from cardiac or pulmonary arrest would be alive if someone had been there to get them to the hospital in time. Oxitone is made to be worn on the wrist to provide a heads-up for someone to get medical assistance on their own, before it’s too late.

With all the technology out there — personal monitoring devices, crocodile clips for your finger, even those panic buttons — nothing helps if the user is not able to mobilize these devices in time. And many patients may not be able to read the signs that cardiac arrest is imminent.

That’s why Eisen developed a wearable watch-like mobile device –– synched with Bluetooth, Android or iPhone devices –– that takes minute-by-minute readings of heart rate and oxygen levels in the blood.

So potentially “disruptive” is this advance that Oxitone recently was chosen from 400 applicants to be among 13 companies – and the only Israeli one — in GE Healthcare’s Start-Up Health Academy Entrepreneurship Program. The three-year program provides healthcare entrepreneurs the tools to propel their product into the healthcare market.

“Oxitone takes the pinch out; it’s worn on the wrist instead of the fingertip to provide continuous, wireless non-stop monitoring while you are walking, eating, sleeping or doing sports,” Eisen says.

Blood-oxygen levels are a critical parameter in monitoring COPD (chronic obstructive pulmonary disease), which can prevent patients from getting enough air into their lungs.

COPD also accompanies chronic bronchitis, asthma and emphysema, leading to shortness of breath. It is estimated that COPD is the third-highest cause of death in the United States.

Oxitone non-invasively determines if a cardiac event is imminent by following blood-oxygen levels. It may also help people who suffer from sleep apnea, giving peace of mind to the wearer and their loved ones. 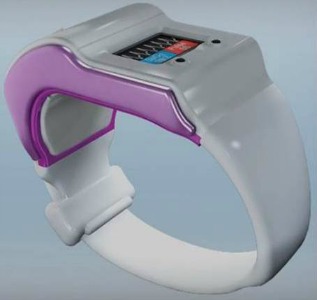 It looks like a watch, but it’s a sophisticated blood-oxygen and heart-rate monitor.

When heart rates change and oxygen levels drop, Oxitone sends alerts to pre-determined locations. It can also be used for long-term care, as physicians can access ongoing records to see how a patient is doing over time.

“My product facilitates an early clinical response for cardiac or pulmonary attack,” Eisen explains. “Because it is continuously monitoring, we can provide an emergency alert. With our device, people will feel better because they understand they are protected. This is the breakthrough.”

Eisen is looking for a $3 million investment and looks forward to starting clinical trials on the device in Israel and the UK. Early R&D trials have already been done, he says. There is also a working prototype in hand, but just how the final Oxitone will look is yet to be determined.

Eisen was trained originally as a physicist. The 46-year-old moved to Israel from Moscow in 1999 and obtained a doctorate from Israel’s famed Weizmann Institute of Science. He then did a post-doc at Bar-Ilan University, where he learned about optical lasers. This work of several years enchanted him, and made him curious about applied sciences.

He started working as a freelancer, building various projects and sensors for high-tech companies.

In 2010, Eisen joined Israel’s startup nation culture by founding Oxitone, the name of the company as well as the device. The company is based in Ashkelon, inside the ATI incubator.

The “watch” will cost an estimated $200, plus a monthly service fee depending on use.

UNCOVER ISRAEL - Get the ISRAEL21c
Weekly Edition free by email
Sign Up Now!
Bring Israel's story to life.
Millions of people around the world rely on us to gain a deeper understanding of Israel. We are the trusted source for original content you won't find anywhere else.
You can make a difference. Donate today to support journalism that brings Israel’s story alive.
SUPPORT ISRAEL21c
Read more on:   GE Healthcare, cardiac arrest, Leon Eisen, Oxitone, Research, Medical devices, Health