Even though organic agriculture and sustainable farming practices are on the rise, feeding a hungry world demands that commercial farmers rely on genetically engineered (GMO) seeds to boost production and fend off diseases. But environmentalists fear that GMO crops are a sort of Frankenstein with unknown future consequences.

The Israeli company Morflora now has an alternative seed treatment in the works that is so revolutionary it is short-listed for Best Novel Agricultural Biotechnology in the 2012 international AGROW awards, and recently won a Red Herring business award in the Top 100 Europe category.

The trademarked product, TraitUP, will be on the market in 2013.

“Our technology is an innovative trait delivery platform. We can deliver any genetic trait to any seed, and the delivered gene does not transform the genome of the treated plant,” says Dotan Peleg, CEO of Morflora.

“We will not have any moral issues that the GMO community faces. We keep the plant intact so that the next generation of seeds of the plants will look totally unchanged. It is a paradigm shift.”

The Morflora TraitUP solution, in testing in Israeli fields and international seed developers, has the potential to immediately transfer desirable plant traits without any of the side effects or risks of GMOs, Dotan tells ISRAEL21c. It could protect vegetable seeds from infestation, fungus, bacteria and drought.

Recently, Dotan saw for himself the effect of severe drought on cornfields in Nebraska. Soy crops had better defenses and were able to survive. Could a hardy soy gene be inserted into corn seed to achieve a similar effect?

“Once gene trait discovery companies will find this drought-tolerant gene in soy they will have a new way to apply it instead of creating a transgenic crop,” says Dotan. “They can use Morflora to apply these traits via seed treatment, bypassing all the breeding cycles and going straight to enhancing a product already ready for shipment.”

The company is working to create a platform for trait discovery companies to test their prospects. 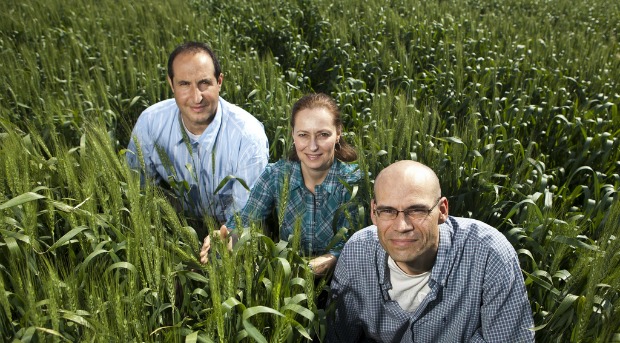 The Morflora team in the field.

The technology is like giving the seed a vaccine, inoculating it from foreseeable challenges, with new genetic information that gets erased in any subsequent generation –– just like a mumps or measles shot in humans. Nor does it affect the soil.

The seed treatment would be applied by the commercial seed producer according to each customer’s needs, with no additional steps necessary at the farm level.

In the future, Morflora technology could be expanded to the forestry and orchard business to protect trees from specific fungal, insect or bacterial attack. It will also allow the recirculation of old heritage seeds, since new traits can be added that can let them be competitive with the newer treated seeds.

Bringing wild seeds back to life

The technology is based on the work of leading agronomists from Israel’s most successful agri-biotech university, the Hebrew University of Jerusalem.

“Forty percent of the biotech research in Israel is coming from the Hebrew University,” says Dotan, pointing to the cherry tomato, long shelf-life tomatoes and other globally licensed products that generate $2 billion in sales annually, he says.

Among the company’s scientists are Prof. Haim Rabinovich, the former dean of the university, who was connected to the company Hazera; and Prof. Ilan Sela, who was involved in the bee vaccine company Beeologics, which was sold to Monsanto.

The 10-person Morflora, based in Sharshoret in the Negev Desert, was founded in 2008 with private investment and a license to commercialize the technology from Yissum, the tech transfer arm of the Hebrew University.