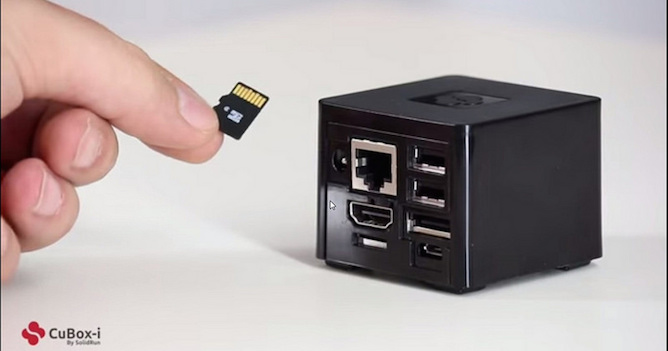 The 2x2x2-inch CuBox-i is the smallest computer in the world. It sells for just $55 and is made in Israel by SolidRun, a 10-person company cofounded by two Arab-Israeli electrical engineers with a background in the high-tech industry.

CuBox-i is the newest model from SolidRun, which launched its first CuBox low-power, miniature micro-PC and media center at the end of 2011, just a year after going into business. The tiny, yet powerful computer is not designed for tasks like word processing or photo manipulation. It’s mainly meant for the Internet of Things (IoT), among other uses.

Weighing only about three ounces (91 grams) with a built-in operating system and WiFi, CuBox can be your Android TV box, multimedia streamer, networked storage solution and pocket-size personal computer, running Lite Desktop and infinite open-source applications. If you need more juice, you can scale up to the CuBox-i2 ($80) or CuBox-i4 Pro ($140) without scaling up in size.

“As of today, we are the smallest computer in the world,” CEO Kossay Omary tells ISRAEL21c. “You do see computers getting smaller, but no competitor has achieved this extreme size and efficiency. It’s good news that the market is moving in this direction, though, because it validates that we chose the correct path.”

Cofounder and CTO Rabeeh Khoury adds, “Given the open-source SDK [software development kit] and tons of available software packages, our computers can be used in a huge range of scenarios limited only by your imagination; ranging from embedded, multimedia, education, cloud client, HMI and many other fields, as well as all the fun projects you always dreamed of.”

Omary, 41, and Khoury, 38, met as students at the Technion-Israel Institute of Technology. Omary was raised in Nazareth, while Khoury grew up in Tarshiha, just east of the northern coastal city of Nahariya.

They did not start SolidRun until they had gained solid design and business management experience at the Israeli branches of top-flight computing and consumer electronics companies including Intel and Galileo Technology (acquired by Marvell in 2001).

In late 2010, the men joined forces to bootstrap their startup, today based in the Tefen Industrial Park near Tarshiha.

“We saw a world trend of computers becoming smaller and more powerful while using less power, and we also saw the trend toward digitizing,” Omary says.

“We understood that in a few years there will be a lot of connectivity and processing power everywhere, from digitized teaching to home automation. You need a computer to manage all this. You can’t put a big, bulky, power-hungry PC everywhere, so we envisioned much smaller computing devices. You won’t even notice them as they do all kinds of smart things for you.”

Now that IoT is the hottest buzzword, it is obvious that the duo’s vision was perfectly on target. They introduced their product at the right time to catch this huge wave. “IoT is a growth vehicle, and so we’re positioning the company for that,” says Omary.

Home automation, for instance, requires sensors in every room for temperature and lighting, and controllers to initiate actions such as locking doors, opening shades and warming the oven.

“Everyone will have 10 connected devices sensing stuff and controlling stuff,” says Omary. “We want to be a leader in providing the technology for this revolution.”

All the CuBox models, including the original version, are sold worldwide via SolidRun’s Internet site and through distributors in Europe, North America, Asia and Australia. The company is seeking its first VC funding as it looks to vastly expand its distribution network.

“As a high-tech company, we don’t categorize ourselves in a sectorial way,” stresses Omary. “It just so happens that Rabeeh and I are of Arab descent. But we do wish for others from Arab society to learn from our experience as entrepreneurs in the high-tech industry, and we always offer advice to anybody who wants to discuss their ambitions and plans.”

UNCOVER ISRAEL - Get the ISRAEL21c
Weekly Edition free by email
Sign Up Now!
Bring Israel's story to life.
Millions of people around the world rely on us to gain a deeper understanding of Israel. We are the trusted source for original content you won't find anywhere else.
You can make a difference. Donate today to support journalism that brings Israel’s story alive.
SUPPORT ISRAEL21c
Read more on:   Innovation, Internet, Technology, CuBox