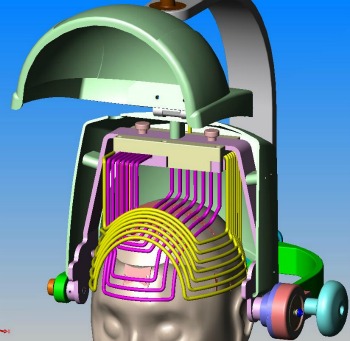 Brainsway’s device consists of a coil attached to a helmet. Treatments take about 15 minutes.

Psychotherapy, drug therapy, hypnosis, cold turkey — whatever the remedy for addictions such as gambling, smoking, or narcotics, doctors agree there is no one quick fix.

However, a new tool from Israel promises to help alleviate addictions and at least a dozen other brain disorders, such as depression, Alzheimer’s disease and schizophrenia, in a non-invasive way with no side effects.

“We invented the ability to reach deeper, to reach the relevant brain regions in psychiatric treatment,” he tells ISRAEL21c.

Unlike electroshock therapy, which is still used extensively today on people with clinical depression who do not respond to other treatments, the more refined Brainsway stimulates only the area of the cortex related to depression, rather than the whole brain. “We gain the beneficial effect of shock therapy without the side effects,” Zangen explains.

Brainsway’s IP is an electromagnetic energy-emitting coil attached to a helmet. The person being treated sits on a chair or couch while wearing the Brainsway helmet for about 15 minutes. The patient may hear small noises, similar to a knock on the door, during the painless experience. 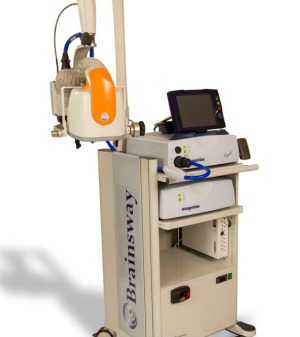 The device will be marketed first to private clinics.

Depending on how the coil is shaped and positioned, it can determine what parts of the brain will be stimulated and how intensively. It can be activated at varying frequencies and patterns for therapeutic results over a course of time.

“Here you have an artificial way to make changes in the brain,” Zangen says.

For treating depression, a person may need to come to the clinic every day in the beginning. Effects start around week two or three, and maintenance treatments are required to hold the effect for as long as possible, says Zangen.

Trial patients in Los Angeles, New York and Dallas have already benefited from the treatment. Trials are taking place at 22 centers throughout Europe, the United States, Canada and Israel including Harvard and Columbia universities. Once the device receives US Food and Drug Administration approval, it will start being sold, probably at first to private clinics.

The ability to stimulate different brain regions is not equivalent to discovering a new medication, he says. It is equivalent to developing a whole new set of drugs.

The first diseases expected to be tackled by Brainsway will be those for which conventional treatments do not work well. The company is also investigating ways to target the “craving” areas of the brain, by stimulating them in a negative way so the brain no longer craves harmful substances or behaviors.

Obesity is another area the Brainsway coil could potentially address, as well as autism, stroke and Parkinson’s disease.

The idea for the device came to Zangen while he was doing his post-doctoral degree research at the National Institutes of Health (NIH) in the United States.

Returning to Israel, he then founded Brainsway in 2003, and today employs 50 people, plus consultants who manage clinical trials covering some 50 studies in total. The company is traded on the Tel Aviv Stock Exchange, and has been public since 2007.

Zangen’s academic background is at the prestigious Weizmann Institute of Science in Rehovot, where he works today. The patent on the Brainsway coil is licensed exclusively to the company by the Weizmann and the NIH, owners of the patent.