A robotic exoskeleton designed in Israel to help paraplegics walk and climb stairs alone, has become the unexpected star of Glee, one of TV’s most popular programs. 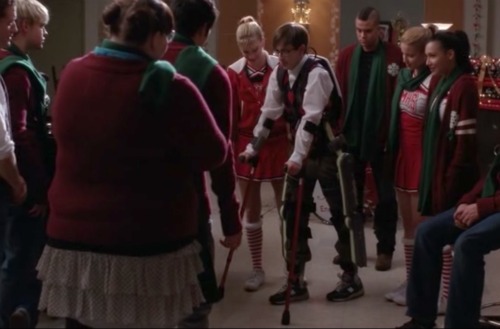 Artie Abrams, played by actor Kevin McHale, steps out for the first time.

When Artie Abrams, the disabled member of West McKinley High School’s Glee club gets up and walks on the program’s Christmas special with the aid of a robotic exoskeleton, there isn’t a dry eye in the house.

“It was invented by some guy in Israel,” says Artie, played by actor Kevin McHale, one of the popular TV show’s most endearing characters, a paraplegic teenager who knows how to belt out a great tune.

It’s a poignant moment for viewers who have watched Artie deal with the pressures of being wheelchair-bound in an able-bodied and deeply prejudiced society. But for Argo Medical Technologies, the Israeli company that created this unique technology that gives wheelchair users the opportunity to walk, climb stairs and meet the world eye to eye, the show, which aired in the US this week, marks a significant turning point in the company’s history.

ISRAEL21c first wrote about Argo Medical in July 2008. It was the first time the company, then a seven-year-old start up, had been featured in the press, and the team behind the quasi-robotic exoskeleton which includes leg braces with motorized joints and motion sensors, a brace support suit and a backpack with a computer and battery, were interested to see what kind of response the device would get.

Standing in line for interviews

Little did they realize what they were in for. The ISRAEL21c story was quickly picked up by popular blogs like MedGadget, Gizmodo, and Engadget, as well as blogs serving the disabled community. Soon after Reuters followed up with a video of the device.

The story exploded on the world’s press, and was reported everywhere from Canada’s National Post, to Italy’s Corriere della Serra. Over 14 TV stations ran their own stories on the technology, from ABC News, to the BBC and CNN. The Israeli company even got coverage in the Teheran Times. 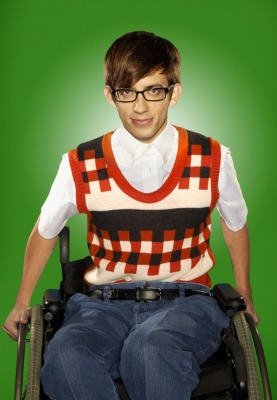 “It all started with ISRAEL21c,” says Uri Attir, who was the CEO of Argo Medical in 2008. “This was the first public exposure of Argo. The article gave way to four or five dozen articles and videos. It led the way to everyone standing in line, literally, to interview or film, or both.”

Since that first wave of interest, the company has been working hard to develop and test the technology with clinical trials at the Moss Rehabilitation Center in Philadelphia in the US and at the Rehabilitation Hospital at Chaim Sheba Medical Center – Tel Hashomer in Israel.

An unexpected call from Glee

A month ago, according to Oren Tamari, Argo’s chief operating officer, the company got an unexpected call from the producers of Glee.

A week later the episode was filmed and on Tuesday of this week, American audiences saw Artie walk using the device, called ReWalk. “It’s Christmas magic,” Tamari tells ISRAEL21c. “They approached us and it all happened very fast.”

ReWalk goes on sale in January, and is expected to cost about $100,000. “We’re going to start sales very slowly, one customer at a time, so we can give everyone good service,” says Tamari.

In January, he says the company expects to sell four units, then will move up to six, and so on. “We will grow slowly, slowly,” he says.

Aside from enabling users to walk, using crutches for stability and support, the seven-pound device also treats some of the cardiovascular, digestive and circulatory health complications which many wheelchair users suffer.

Designed by a quadriplegic

The exoskeleton has a moving story of its own. It was the brainchild of an Israeli electrical engineer, Dr. Amit Goffer who was left quadriplegic after an accident. He decided to develop a system that allows wheelchair users to walk, climb stairs and meet the world on the same level.

After intensive rehabilitation, Goffer began developing the ReWalk prototype in his home, funding it privately and with a Tnufa – Startup Promotion Program grant. He later entered the Technion Incubator, TechnionSeed for a two-year stint and got financing from VC funds, Vitalife, ProSeed, TechnionSeed, the Technion R&D Foundation, and the Office of the Chief Scientist.

“What we want to do is have the person wake up in the morning, put on clothes, put on the ReWalk, go to work and go throughout the day, wearing it,” Goffer, the founder and director of Argo, told ISRAEL21c in 2008.

Now based in Yokneam in Israel’s north, the company’s target market is the community of wheelchair users in the Western world, of which 300,000 are spinal cord injury sufferers (125,000 in the US and 175,000 in ROW) who are physically able to use crutches as a stabilizing tool.

Mad About You star, mad about ReWalk

Aside from the massive press interest, the ReWalk has also attracted the interest of other Hollywood stars. In April 2009, Paul Reiser, the star of 1990s hit TV show Mad About You, saw ISRAEL21c’s article and was intrigued enough to follow it up with a visit to the company with his family.

While ReWalk holds out hope for thousands of people, sadly the man who devised the system still cannot benefit from his own invention. Goffer has partial use of his hands, but it is not enough to operate the ReWalk.

In his interview with ISRAEL21c in 2008, Goffer said: “This isn’t the first company I’ve founded. My incentive to develop it was a business opportunity. When I was injured the first thing I was offered was the only thing: a wheelchair. I do believe that in the future, in many cases, the ReWalk – or its competition – might be offered. I don’t see any reason for the wheelchair to be the sole solution. There hasn’t been a real change [in the technology] for centuries.

“We’re taking a safe business approach, starting with paraplegics, and the time for a quadriplegic like me will come,” he added.

Back at Glee, some attribute the generous present to Artie as a present from Beiste, the high school football coach. Others are calling it a Christmas miracle.