The Northern Road meanders along the border between Israel and Lebanon, hugging hills and offering stunning views over valleys.

The 60-kilometer road, known as 899, is remarkably uncrowded, filled with rollercoaster curves and lush greenery.

Here are nine interesting places to stop along the way, from Kibbutz Hanita near the Mediterranean Sea in the west, heading east to the last junction that ends at the Hula Valley. 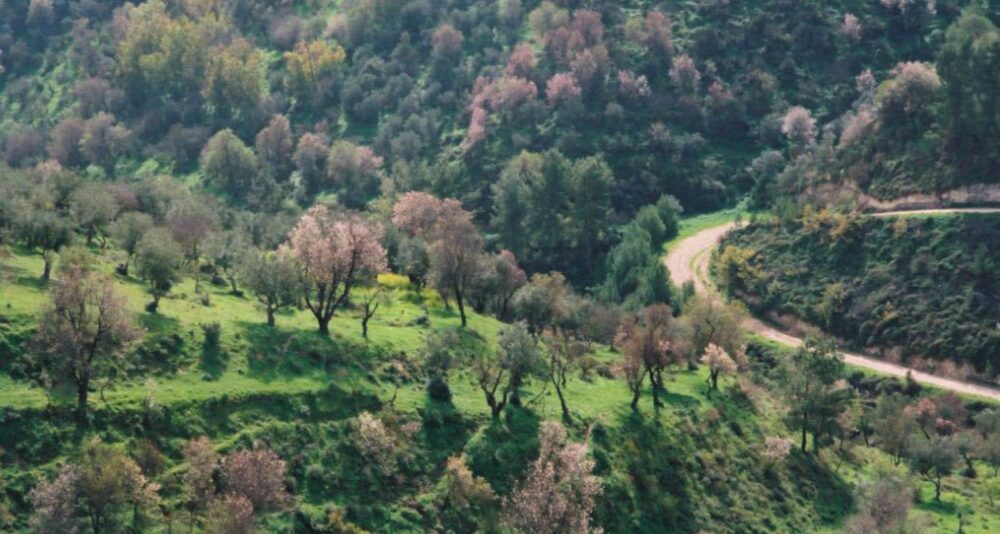 The Hanita Forest covers about 2,300 dunams (568 acres) near Kibbutz Hanita. There are walking paths and picnic areas, including one for people with reduced mobility.

At the scenic lookout, there is a view of villages in Southern Lebanon. Since there’s no way to cross the border, you can experience Lebanese cuisine at Haarazim in Shlomi, 04-987-5244. 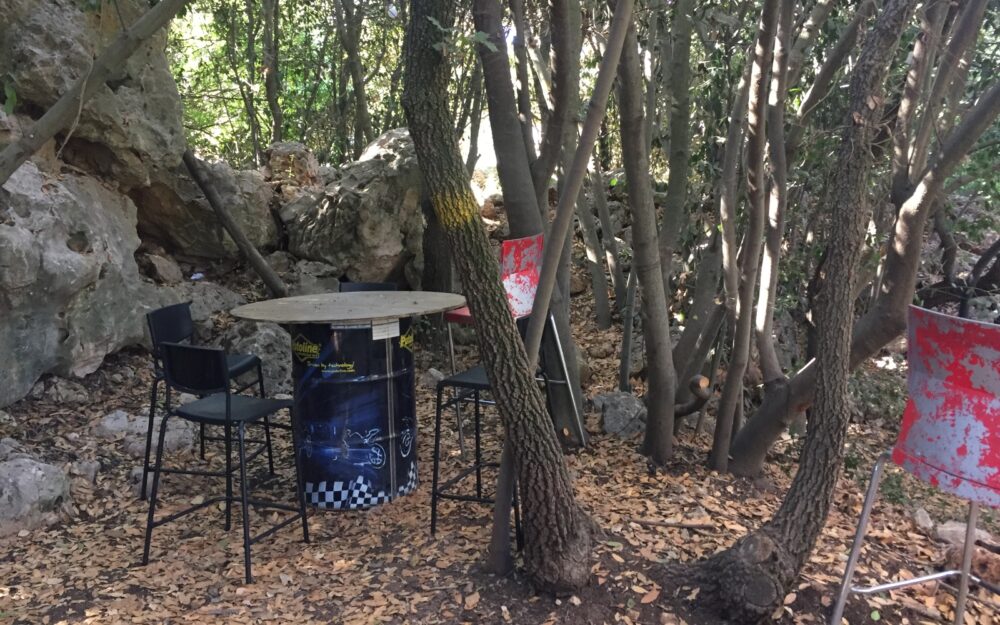 Wooded spot at On the Border Café. Photo by Diana Bletter

Esther Piechota runs Esther’s Coffee Shop, a freestanding café that serves pastries and homecooked specialties. Diners can sit outside in a pastoral setting shaded with tall trees right on the border. Her husband, Ofer, says proudly that his wife is a chef “with golden hands.”

Nearby is Al HaGvul, On the Border, a coffee shop started by Ohad Hatan, who built it with discarded furniture and farm equipment. Ohad Hatan at his On the Border Café. Photo by Diana Bletter

Both places serve as an oasis for motorcyclists, hikers, bicyclists and visitors. 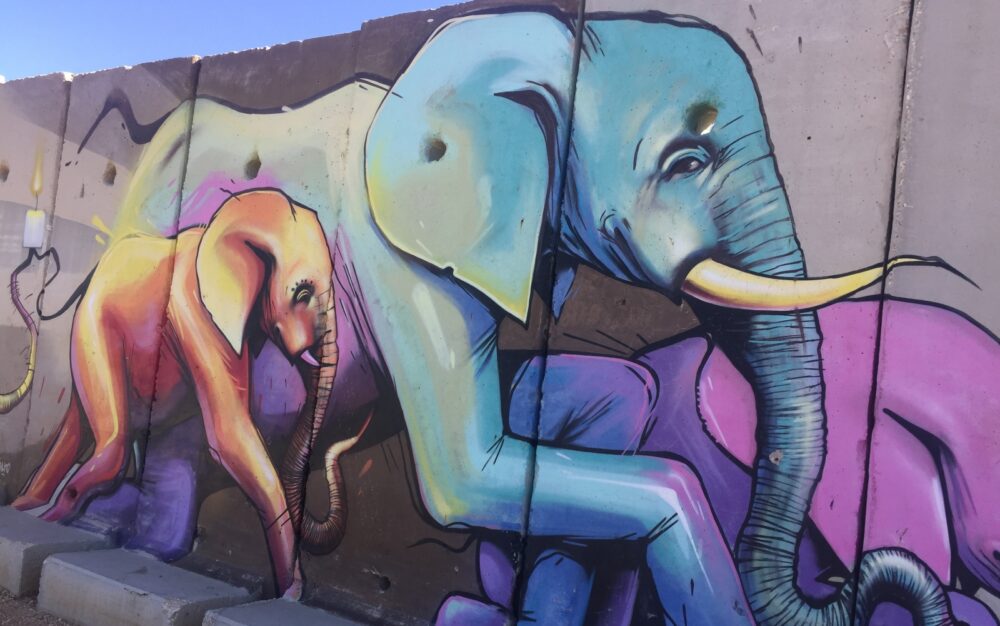 Art on the wall along the border between Israel and Lebanon. Photo by Diana Bletter

This spot is next to part of the border wall, which has been transformed into a public outdoor art display by Artists 4 Israel, with works by well-known international artists including Zabou, Juuri and Flako. Art on the border wall between Israel and Lebanon. Photo by Diana Bletter Moti and Barak Salhov, father and son, are second- and third-generation farmers in the Galilee. They started cultivating berries after discovering that “the Galilee climate and working like Sisyphus” makes for high-quality fruit.

From May to September, Barak’s Berries is open for people to pick a wide variety of fruit including raspberries, blueberries, blackberries, Goji berries, plums, Pakistani strawberries and peaches. The onsite store sells refreshments as well as local products, including honeycombs and olive oil, and there are various workshops offered during the season.

With a master’s degree in biology specializing in genetic ecology, Karmit Arbel Rumbak peppers her walking tours around Mattat with her knowledge.

And when she’s not being erudite, she’s known as a Pied Piper, with children following her around what she calls “hidden trails” of the Galilee, where she points out wildflowers and edible plants. Rumbak can be reached at 072-397-1215.

Kibbutz Sassa offers an Extreme Rope Park with rope routes, a climbing wall, and 80 ziplines that run through the high trees.

One of the rope routes is the longest of its kind in Israel, suitable for anyone from the age of nine and up. There are also rope routes for younger children, including one for toddlers who are strapped in and can be accompanied by their parents. The park is run by Dror Zabdi.

This natural lake on Kibbutz Yiron draws tourists throughout the year. There is a petting zoo and pedal boats to take a relaxing route around the lake while spotting marsh turtles and ducks.

Visitors can rent fishing rods (the fee for the fish is by weight) and children will enjoy the playground and arts and crafts activities.

The rocky area around the Northern Road has become home to a variety of winemakers, which shouldn’t be too surprising since the area has a longtime history of viniculture.

There is Galil Mountain Winery near Kibbutz Yiron, which was started in the 1990s; 3 Vines Winery in Ramot Naftali, established in 2003 by Einat and Yossi Ben-Barak, who leads the winetasting tours; and Alma Vineyard, on the northern slope of Ramat Alma, which is part of the Binyamina Wine Group. A sarcophagus at Tel Qedesh. Photo by Diana Bletter

Before winding down the last set of hills, visitors can stop at Tel Qedesh, an archeological park where once stood a refuge city mentioned in the Bible. There are also sarcophagi, heavy stone caskets used by wealthy pagans, near a Roman temple that functioned from 117 to 363 BCE.

From there, visitors can see Mount Hermon looming up in the distance. Another archeological attraction on the Northern Road is Bar’am National Park, where there are remains of a synagogue from a Byzantine Jewish settlement.

If the hairpin turns of the Northern Road aren’t enough for you, there are a few places where drivers can turn onto the Old Northern Road, providing a rugged detour.

The Old Northern Road then meets up with the new and dips downward until it hits Yesha Junction and the Hula Valley, where, after riding up in the mountains, the earth seems very flat indeed.