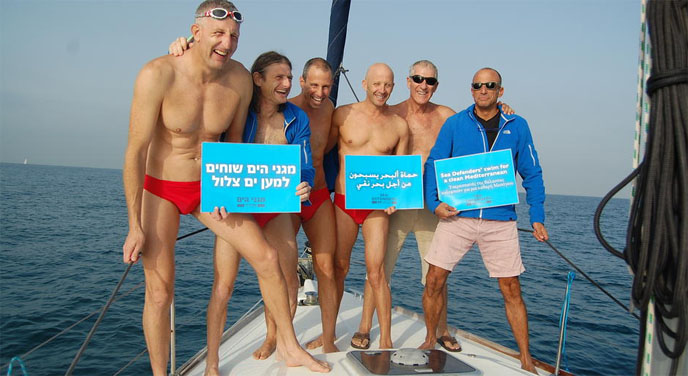 The sextet, that calls themselves Sea Defenders, teamed up with the Israeli Zalul environmental NGO which is dedicated to protecting the seas and rivers of Israel. They collected plastic bags and other garbage found in the open waters during their record-setting swim.

“To swim through plastic bags is humiliating and intolerable,” they told journalists in Israel. “The sea should be a sanctuary for all and conserved for all.” 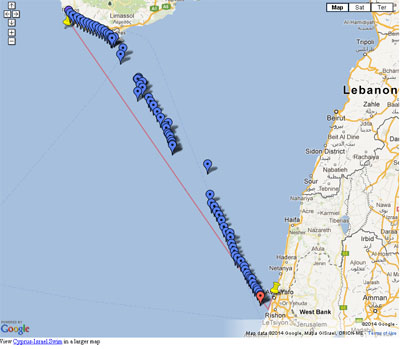 The six swimmers set up the website Cyprus Israel Swim to keep followers of their feat informed about their mission. Here, you can find out a bit about the ‘crazy’ sports fans:  Udi Erell, 66, served for 23 years in the Navy; Ori Sela, is a former professional swimmer and owner of Water World; Doron Amosi, 45, is a family physician and endurance sports nut; Ben Enosh, is a proud vegan who takes his inspiration from Mahatma Gandhi; Oded Rahav, 48, another vegan and high-tech entrepreneur who takes his inspiration from Martin Luther King; Luc Chetboun, 46, is an Ironman and triathlon athlete and big fan of Woody Allen, Bach, Escher and Monty Python.

This was the second time this group of six set out to swim from Cyprus to Israel. They aborted an attempt last year due to rough seas.

The swimmers, who cite Diana Nyad as an inspiration, wore special tracking devices so the crew on their support yacht could keep tabs on them. They swam day and night in one-hour relays and were joined by pods of dolphins along their route.

The guys set out from Paphos on October 5 and arrived at Rishon Lezion on October 10, after swimming non-stop for 123 hours and 10 minutes.