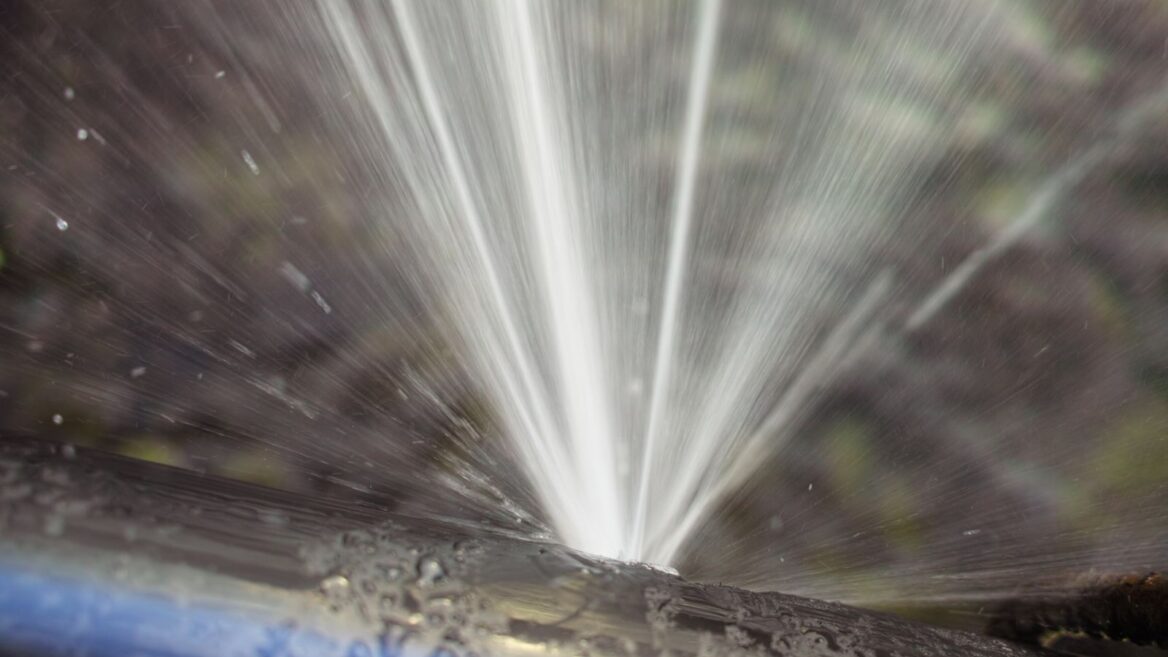 Photo by Leonardo Viti via Shutterstock.com

Every day, about 91 billion gallons of drinking water are lost through leaks, according to the International Water Association.

The US Environmental Protection Agency reports that, on average, 14 percent of treated water in the United States leaks out. In some water systems, as much as 60% of water is lost.

Leaks can spring up anywhere along water’s piped journey from reservoirs or desalination centers to water mains to indoor plumbing.

It’s never been more critical to conserve water. The UN estimates 2.3 billion people already live in water-stressed countries and water use has been growing globally at more than twice the rate of population increase in the last century.

Here’s how five Israeli companies are helping to locate and fix water leaks that waste an increasingly scarce resource.

“Microwaves can penetrate 5 to 6 feet below ground, which is the depth of water pipes,” Asterra CTO and founder Lauren Guy tells ISRAEL21c.

Because microwaves are sensitive to conductivity, Asterra can differentiate between drinking water and other kinds of water, such as rain.

“If there’s drinking water in the ground it has to be coming from a pipe. We point that out to the utility,” Guy explains.

“That’s equivalent to the amount used per year in a city of 3 million people,” says Guy. 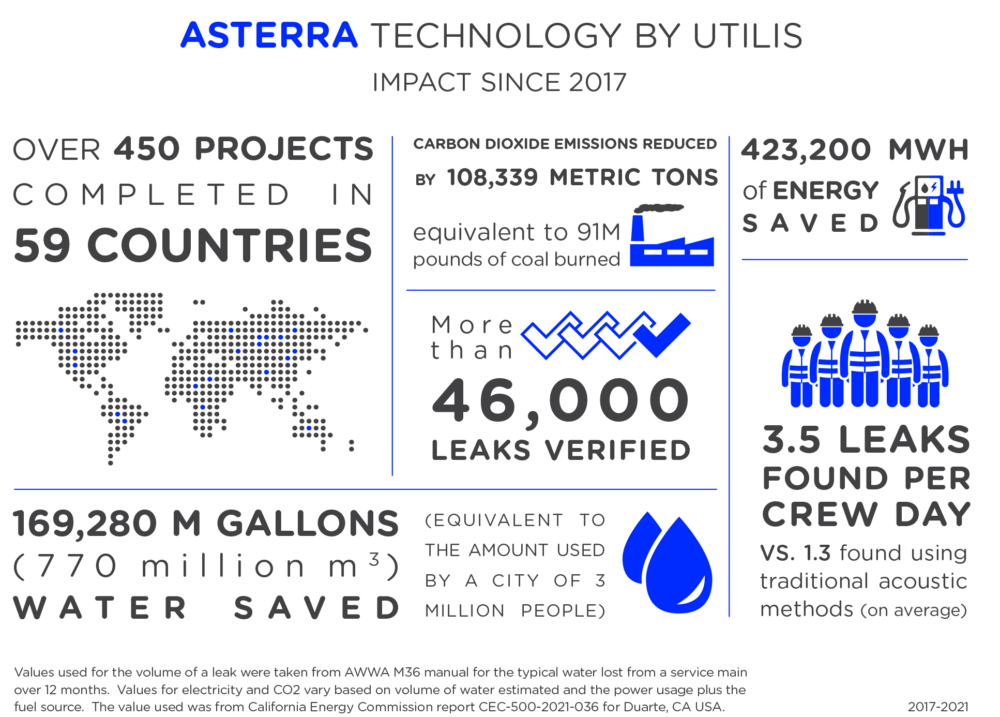 “That’s because 17% of the energy used in most developed countries is pushing water from the reservoir or desalination plant. And 25-30% of that is lost through leakages, so it’s a huge waste of energy,” Guy explains.

Asterra can see through the entire distribution system, but its primary contribution is detecting leaks in the small service lines leading from water mains to each house, Guy says.

Some 70% of leaks happen in these smaller pipes. They’re less obvious because the pressure is lower than in the water main.

“They can leak for years before anyone will know about it,” Guy says. “Using satellite images manipulated with our algorithm, we show utilities where we think the leakages are and they go and fix them.” 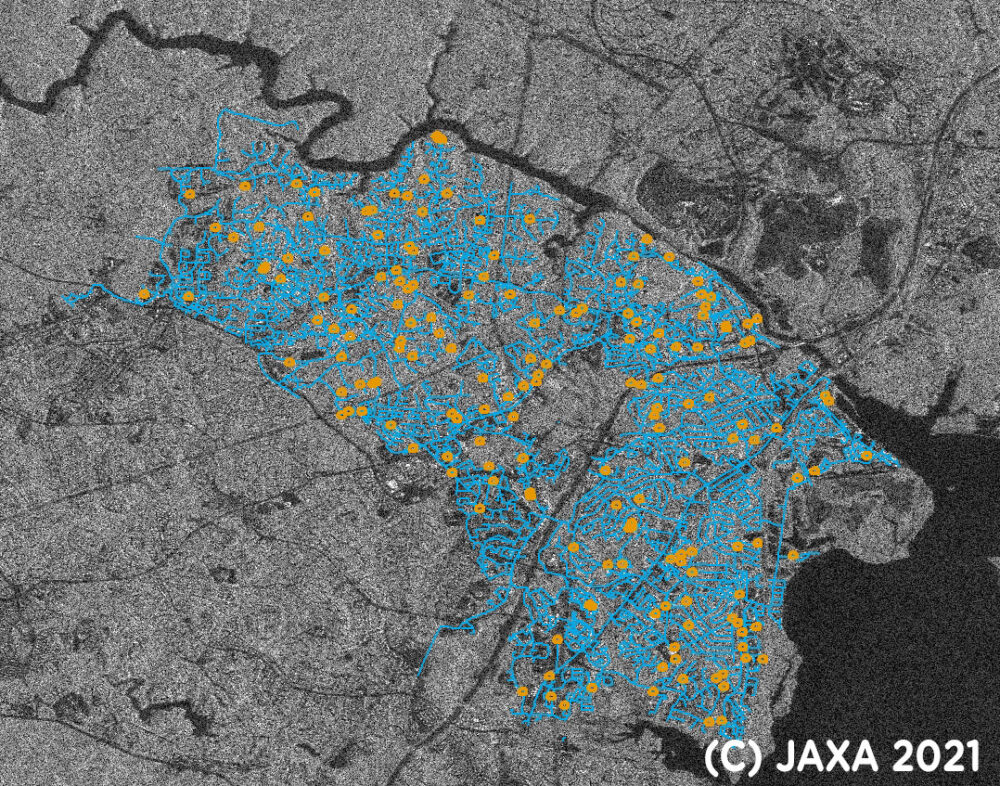 Asterra’s system – which requires no hardware or capital expenditure — also has helped in humanitarian projects.

When Hurricane Dorian in 2019 destroyed much of the water infrastructure of the Grand Bahama Utility Company, Israeli humanitarian organization IsraAID helped devise an emergency water strategy and introduced Asterra’s technology to reduce leakage and energy consumption.

The Inter-American Development Bank (IDB) has used Asterra’s system to improve water resource management in Latin America and the Caribbean.

The FlowDX micrometer from DrizzleX shows residents of multifamily buildings exactly how much water they’re using and alerts property managers about abnormal patterns that may indicate leaks.

Founded in 2019 by Israeli mathematician and software engineer Esther Altura, DrizzleX has more than 3,000 installations in 700 apartment houses across California, Connecticut, Massachusetts, Georgia and New York.

“Often when we install our system, we discover ongoing leaks right away, and when they fix them water consumption can go down 30% or more,” Altura tells ISRAEL21c.

“At the beginning of last year, our micrometers were installed in a building in Huntington Beach, California. One toilet in this building was leaking 3 gallons a minute,” she says.

“We sent an alert, but the owner ignored it because he couldn’t believe I can sit in Jerusalem and tell him there is a leak in the toilet tank in apartment 21 in Huntington Beach.”

The owner finally fixed the toilet after two months of alerts, during which time that one toilet wasted 150,000 gallons of water.

“His water bill for a 31-unit building was doubled because of that leaky toilet,” Altura says. “Now he believes me right away. I have other landlords who see the leaks on our dashboard and 10 minutes later it’s fixed.”

Altura explains that DrizzleX’s alerts are based on data, not motion sensors. Data collected from the micrometers goes into a proprietary database in the cloud, where it’s monitored by AI and analyzed for abnormal usage patterns.

“We can associate the information we have with a particular building, apartment and appliance,” she says.

Protected by 21 patents, Aquarius Spectrum’s technology automatically correlates data between each pair of sensors, analyzes the data with AI to verify and pinpoint the exact location of the leak(s) and presents operators with an estimation of their size and intensity on a user dashboard.

According to Aquarius Spectrum CEO Naama Zeldis, “many large utilities are looking to adopt innovative solutions that enable continuous and remote monitoring of their water network.”

One US water utility located and fixed 11 leaks within the first month of installing 150 of the company’s newest AQSense-Edge sensors in a major city.

“In another US-based project, where the customer recently upgraded to the new AQSense-Edge sensors, more than 20 leaks were found and fixed, of which several leaks were simultaneously detected on the same section of pipe by only two sensors.”

Zeldis said Aquarius has deployed more than 10,000 acoustic sensors over the past 12 years “that address all types of water infrastructure.”

The Netanya-based company is now increasing its foothold in the US market with the addition of another waterworks distributor, Everett J. Prescott, (EJP) https://www.ejprescott.com/ which does business in 10 states.

Curapipe offers a no-dig, in-pipe leak self-detection and repair solution for defects in joints, pinholes or cracks in water mains and service pipes.

Co-CEO Peter Paz says these problems are responsible for “the lion’s share of drinking water losses.”

The company’s Trenchless Automated Leakage Repair (TALR) technology uses water pressure to send a “train” containing a composite sealant through the pipes. The technology automatically finds and plugs defects as it passes over them.

“Ideally, TALR is applied in networks that suffer from extreme water losses — even up to 60% of the total supply,” Paz tells ISRAEL21c.

“Our solution is far superior to manually excavating and repairing leaks when it comes to bulk reduction of leakage levels,” he says.

There’s minimal service disruption as the utility doesn’t have to drain or clean the pipes first; the operation can be finished in less than a day. The system also measures and maintains a database of the exact level of leakage repaired.

TALR was invented in 2007 by four hydraulics and materials experts and was developed in pilot projects with London’s Thames Water Utility and the Jerusalem Water Utility.

Paz says that field data from Curapipe projects in Israel, Italy, South Africa, Brazil, Mexico and the UK indicate that TALR reduces over 90% of leakage levels.

In one case, Curapipe repaired every leak in a kilometer-long cast iron water pipe in Brescia, Italy, which was leaking some 10 cubic meters every hour. This effectively saved 89.8 million liters of water that would have leaked from that one pipe over the course of a year.

Based in Kiryat Malachi, Curapipe operates in several countries and is now poised to enter the US market with the launch of its Customer Side Leakage Repair (CSLR) system that applies TALR technology to swimming pools.

CSLR’s digital layer provides real-time operating instructions and insights about the nature of the leak and its approximate location in addition to a before-and-after repair report.

Based in Rosh Ha’Ayin with offices in the UK, Boston and New York, WINT uses artificial intelligence to detect and stop leaks at the source.

Its IoT water-flow analysis devices for construction, commercial and industrial applications alert managers when water is leaking and can automatically shut it off.

“Buildings are a major source of water waste and carbon emissions: a single leaking toilet will typically lose water at the rate of 1 million gallons a year, which result in 4.5 tons of greenhouse emissions — similar to the total annual emissions from a passenger car,” said Yaron Dycian, chief strategy officer for WINT.

WINT was named to Fast Company’s inaugural Next Big Things in Tech https://www.fastcompany.com/next-big-things-in-tech list last November on the basis of a pilot program with PepsiCo that cut water consumption at a Belgian snack facility by 10%. PepsiCo is now rolling out Wint’s tech to five European sites.

The company completed a $15 million Series B funding round in January from investors including Insight Partners, Israeli serial entrepreneur Marius Nacht, and several global construction and real-estate companies.

UNCOVER ISRAEL - Get the ISRAEL21c
Weekly Edition free by email
Sign Up Now!
Bring Israel's story to life.
Millions of people around the world rely on us to gain a deeper understanding of Israel. We are the trusted source for original content you won't find anywhere else.
You can make a difference. Donate today to support journalism that brings Israel’s story alive.
SUPPORT ISRAEL21c
Read more on:   Environment, Technology, Water conservation, water, Water Conservation Exhibition, Asterra, DrizzleX, Aquarius Spectrum, Curapipe