Three young Israeli entrepreneurs are saying “cheese” in all languages as their photography application continues its viral buzz and recently surpassed the 35 million-user milestone.

PhotoMania, a social image-processing service that provides state-of-the-art photo effects, is considered one of the biggest entertainment applications on the Facebook platform today.

You don’t need to be a graphic artist to use this app. The whole point, says Trionity CEO Ofir Yosef, is to offer “a one-click photo effect.”

Knowing that photos are an integral part of Facebook and that posting photos on the social media site has become a favorite pastime for millions of people around the world, Trionity’s trio of friends came up with an application that allows users to play with their photos and turn them into exciting visual art. The graphic technology they developed lets users choose from 400 photo effects just by clicking the mouse.

“Users don’t need to understand PhotoMania — they just need to explore it,” says Yosef. “Our aim is to let users who have no technical knowledge create effects in five seconds.”

Every night for six months, the three of them got together to formulate, brainstorm and code their joint dream for a high-tech graphics technology platform.

“This company is ‘Start-Up Nation’ by the book,” Yosef tells ISRAEL21c. “We were a bootstrap company [without external help]. We decided that we were not going to raise money until we proved that we were worth it.”

By the end of 2010, they realized that it was all or nothing and quit their lucrative jobs to invest all their time in the PhotoMania application. 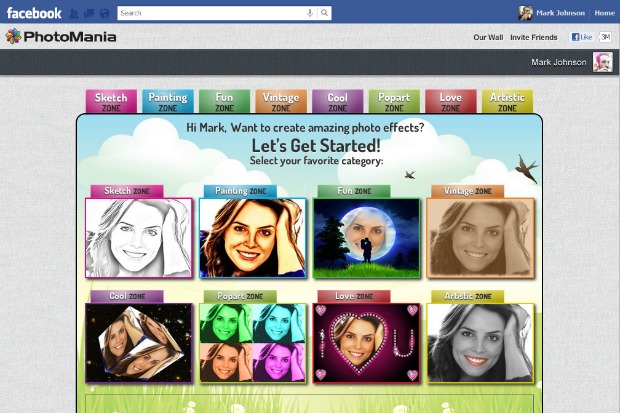 PhotoMania made its debut on Facebook in February 2011. Having agreed to spend no money on advertising or marketing, the three energetic guys waited for feedback and tweaked their product according to responses they got.

Within nine months, says Yosef, “we reached the milestone of 10 million unique users. This was the turning point to go to investment.” In December 2011, Magma Venture Partners gave the guys $1 million in seed funding.

Counting 80 million users, Instagram is the first company that often comes to mind when talking about cool photos on Facebook. Photo editor apps like BeFunky, PiZap and Picnik are also vying for parts of the same photo-sharing pie.

But Yosef isn’t worried. Noting that PhotoMania’s popularity is “still growing all the time,” he says Trionity’s sole product is the only “one-stop shop” on the market and offers the most variety.

“The purpose is that the user will want to play with his photo. He’ll come to PhotoMania because it’s the only place he can do everything with his photo: Sketch, painting, share, embed. It’s social and creation side of things,” says Yosef. 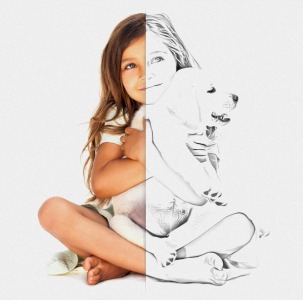 Here’s an example of what you can do with PhotoMania.

Asked whether his company is trying to trump graphic artists, Yosef says it’s the contrary. “We pick the best graphic abilities for the users and put them in one click,” he says. “We are challenging the graphic artists to be more artistic than what we can do with one click.”

Currently, PhotoMania has attracted 35 million users, of which three million are active on a monthly basis. The application processes more than two million photos daily and consistently ranks in the top 10 photo apps and top 25 entertainment apps on Facebook.

“We’re not surprised by its popularity because we did a lot of research and tweaks and changes so the product will be so successful,” says Yosef.

The company of nine — based just outside of Tel Aviv — is looking to hire additional web developers.

Trionity was worth $5 million before it officially started. Today, Yosef estimates, they’re worth at least tenfold. “We’re one of the biggest players in what we’re doing.”

While mulling a second investment round, Yosef promises many fun surprises for 2013.

For starters, the money from Magma is being used to broaden its photo editing and sharing platform. “We’re launching a social platform where PhotoMania users can interact with one another,” Yosef says. “It’s going to be huge.”

Yosef, Ziony and Kol also plan to launch a mobile app in the near future.