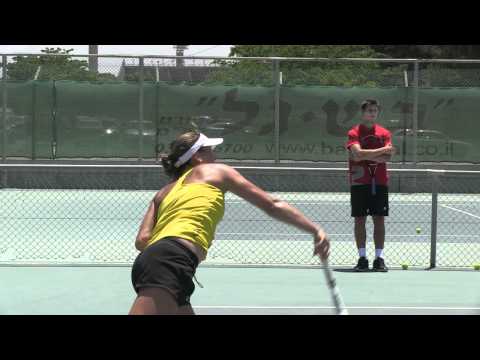 Local tennis got a boost over the weekend as 12-year-old Yshai Oliel made history in becoming the first Israeli to win the Junior Orange Bowl International Tennis Championship at Coral Gables, Florida, for his age group. The long-haired Hebrew-speaking tennis player beat Patrick Sydow of Aruba, 6-3, 6-1, to take the trophy.

“I’m really happy and excited by what’s happened,” Oliel said after the final. “The enormity of this achievement hasn’t sunk in yet. From my perspective, this is only the beginning.”

Oliel, who hails from Ramle, started his tennis career at five years of age. He is considered one of Israel’s top young gunners.

Prime Minister Binyamin Netanyahu called to congratulate the left-hander on his win.

“This was a great achievement for Yshai, and I’m really proud of him. It’s been a long process that began eight years ago, and I’m glad it’s reached this point,” said Jan Pochter, Oliel’s coach. “We are all really excited and hope that further achievements will follow. We’ve had hundreds of phone calls, including from the prime minister.”

In 2001, Israel’s Shahar Peer won the event in the Girls ’14 category. She said the seventh grader’s achievement should catapult him to a “bright future.”

UNCOVER ISRAEL - Get the ISRAEL21c
Weekly Edition free by email
Sign Up Now!
Bring Israel's story to life.
Millions of people around the world rely on us to gain a deeper understanding of Israel. We are the trusted source for original content you won't find anywhere else.
You can make a difference. Donate today to support journalism that brings Israel’s story alive.
SUPPORT ISRAEL21c
Read more on:   News, tennis, Yshai Oliel