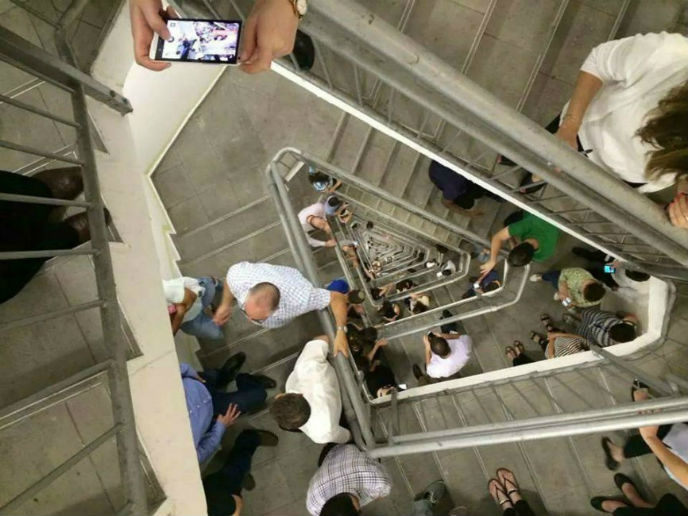 Employees at the Azrieli Center in Tel Aviv go to the stairs to take shelter.

One Hamas-fired rocket every 10 minutes. That’s the average salvo Israelis have had to endure since the start of Operation Protective Edge on July 8, according to the IDF.

The unpredictable but constant barrage of rockets from Gaza, together with the Red Alert warning sirens that echo through Israel, is a traumatic combination leading to great anxiety and stress.

And while there are more calls to help lines and health centers during times of heightened conflict, and a great deal of tension and worry, Israelis tend to use their creativity and out-of-the-box thinking not only to endure the trauma but to rise above it.

ISRAEL21c brings you the top 10 ways Israelis cope with stress during rocket attacks:

To ward off stress, there’s no better remedy than a chuckle or three. Almost as soon as Operation Protective Edge started, Israelis turned to dark humor and silly jokes to deal with the tense situation

There are Facebook forums dedicated to poking fun at Hamas’s calls of destruction, cartoons circulated on social-media platforms, one-liners sent via text messages, and satirical jibes tweeted and retweeted.

Academic research has proven that singing and music stimulate the release of dopamine (a neuro-chemical responsible for pleasure and reward) and scientifically helps people feel better.

The Code Red song written four years ago by a Sderot teacher-art therapist has a catchy beat and it’s easy to see how despite its frightening lyrics, it helps to cheer up the young segment of the population.

Another music video being hailed as “the” song for the bomb shelter is actually a threatening propaganda pop ditty made by Hamas to scare Israelis. But the Hebrew-language video had the opposite effect and Israelis embraced its tune and terrible rhyming scheme. Moreover, some Israeli musicians re-recorded the Hamas song with an Israeli slant and put it online for a double dosage of bomb-shelter singing pleasure.

Upon being attacked by Hamas, Israelis turned to technology to create alert apps that could help one another alleviate some of the tension.

The nonprofit emergency medical response service United Hatzalah created a public SOS emergency alert app for people in distress. Tzeva Adom (Red Alert Israel) is a smartphone app that was updated for the Android public as well as its first iOS customers. Users of the popular Israeli social app Yo also get a “yo” every time a missile is launched into Israel if they are subscribed to Red Alert Israel. And Google Glass added a new app that warns of incoming rockets fired by Hamas while providing information on the nearest shelter.

Keeping the day-to-day routine (as much as possible) is the key to living through this kind of crazy situation. Most summer camps are still in session, employees still go to work – even in the worst hit south, cafés are still serving customers and fitness buffs still go to the gym even though everyone is being cautious and staying in close proximity to a shelter. 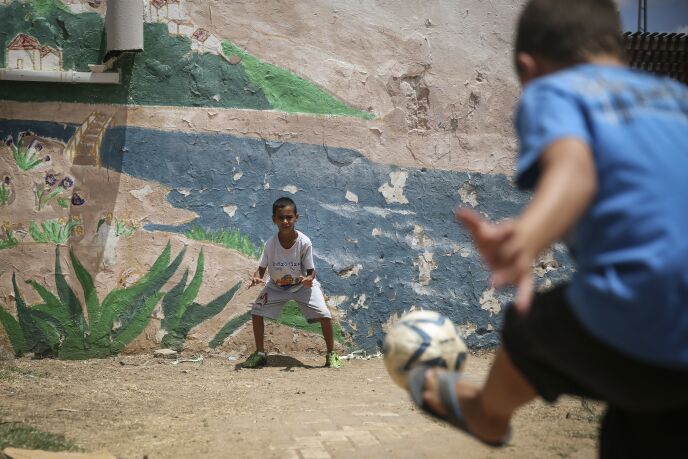 Children playing outside a bomb shelter that also functions as a children’s summer club in the southern Israeli town of Kiryat Malachi, July 14, 2014. Photo by Hadas Parush/FLASH90

Israelis are known as a warm people, and when disaster strikes this quality shines through.

There are youngsters who voluntarily took it upon themselves to make sure their elderly neighbors make it to a shelter on time; there are resilience centers helping people deal with trauma; and trauma experts lending a patient ear. There are people in northern communities offering respite to residents of the south in their private homes. And there are those who, while buying toys for kids in the hardest-hit communities, find that the store owner gives them a discounted price and adds in a bunch of freebies.

Following the Home Front Command’s advice “to ensure the resilience of the Israeli people during armed conflict, disasters and emergencies” is of supreme importance and most Israelis take heed. The website includes an early-warning alerts map, Facebook updates, a news scroll, a section on how to find the best shelter, and advice on how to best keep children and special-needs citizens safe. 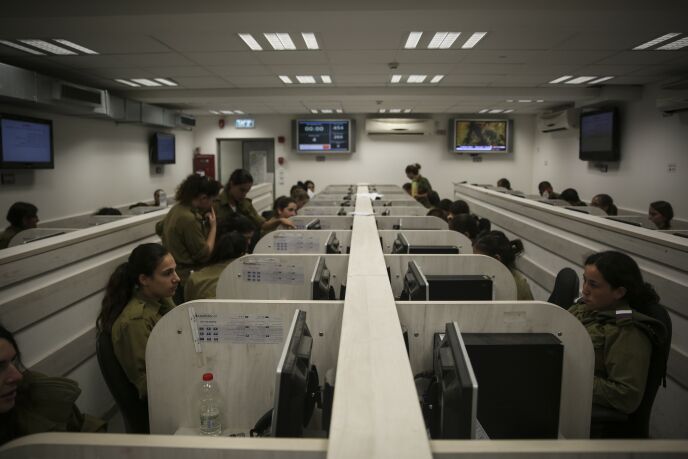 A call center of the Home Front Command, in the central Israeli city of Ramla, July 17, 2014. Photo by Hadas Parush/FLASH90

Israel ranked No.1 in a 2011 poll on the number of hours spent on Facebook, Twitter and other social-networking sites. The average Israeli, according to the Comscore research company, spends almost 11 hours a month surfing social networks, the most recorded in the world.

That figure usually rises in times of stress, as Israelis update and search for updates constantly. And it turns out that keeping in constant touch alleviates anxiety. “Thanks to WhatsApp groups, people can make sure their loved ones are safe right away. Knowing this reduces uncertainty, which breeds anxiety,” Ashdod municipal psychologist Adi Gayer told Israel Hayom newspaper.

One of the “fun” aspects of being on social media all the time is posting selfies. Israelis have made a game of who can post the funniest/strangest bomb-shelter “shelties” – such as snapshots of unlikely neighbors in towels meeting in the stairwell during an alert, families squished into a safe room, and a hodgepodge of people in a public shelter. There’s even a Facebook group called “Bomb Shelter Selfies.” Taking a photo provides a tiny bit of respite in a tense situation. 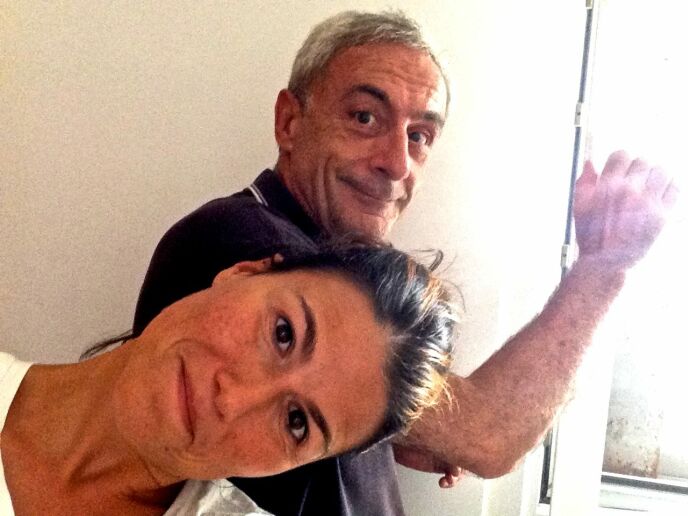 Israel is a country of news junkies even at the best of times, but when the country is at war, everyone becomes a news hound. Television news producers toss features to the side in favor of round-the-clock coverage, and the same goes for radio shows and online sites. Even though research has shown that reading war news is bad for one’s health, it is near impossible not to constantly check in for the next update. After all, no one wants to be the last to know.

Israeli hospitals that regularly provide medical care to patients from Gaza and the Palestinian Authority continue to do so even when their own staff members’ hometowns are under a terrifying barrage of rocket attacks.

“Children are children. They are not our enemies,” Wolfson Medical Center Pediatric ICU Head Nurse Irena Nosel told ISRAEL21c. “It doesn’t matter where they are from. If these children will not come to Wolfson and receive treatment, they will have no chance to live.” 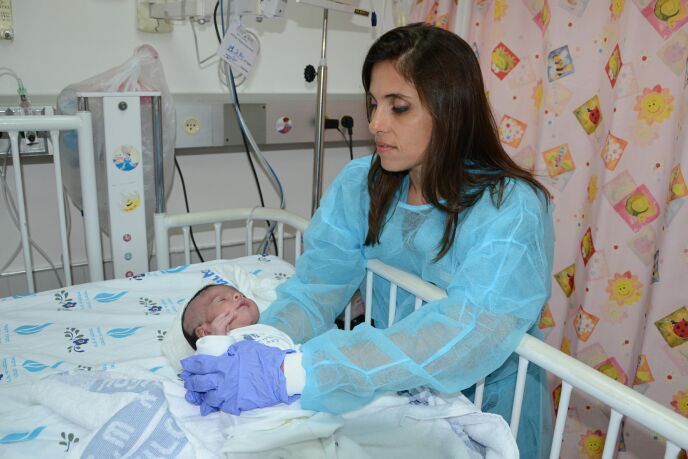 Irena Nosel caring for a baby from Gaza at Israel’s Wolfson Medical Center.

The following statement by Safed’s Ziv Medical Center director Dr. Oscar Embon summarizes the view of the Israeli outlook on life: “We treat patients regardless of religion, race, nationality, and give the best care we can provide.”