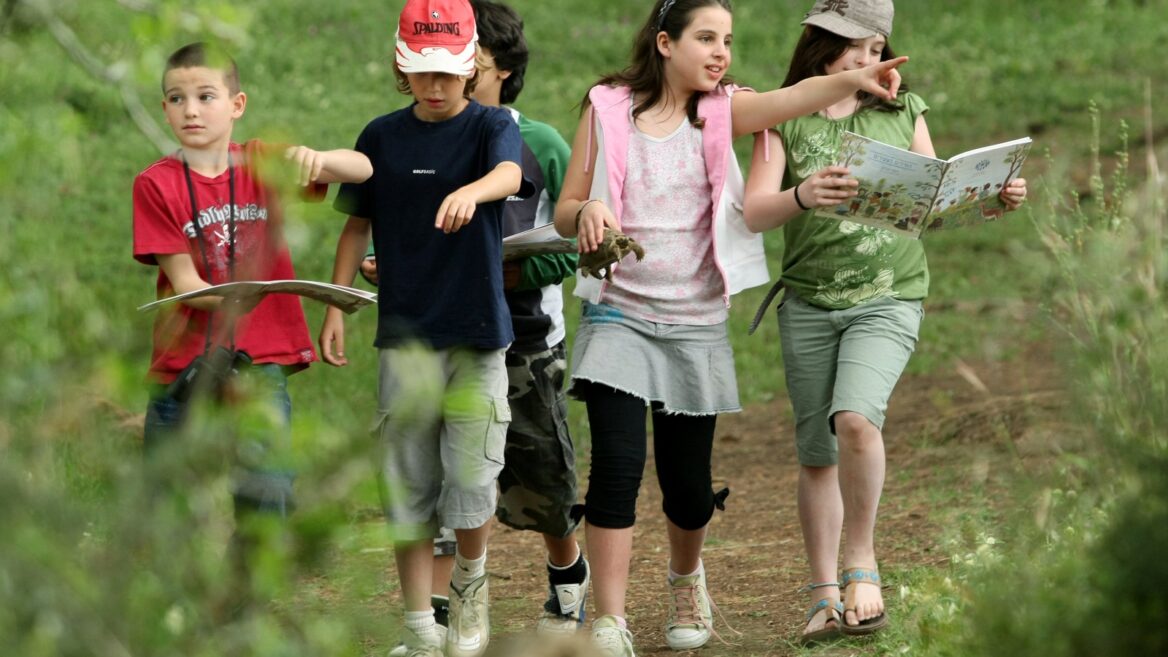 Hiking in Israel doesn’t have to be a macho endurance event where whoever climbs the highest or treks the farthest wins.

Sometimes you have young children in tow and what you really need is a less strenuous hike suitable for little feet, a stroller or a backpack with baby aboard.

If that’s you, let this ISRAEL21c hiking compilation be your companion to the easy outdoors. We’ve put together our top 10 hikes suitable for families with kids of all ages.

One of ISRAEL21c’s favorite hikes takes you deep into Nahal Katlav, starting at the lovely Bar Behar restaurant, a short drive from Jerusalem in the Bar Giora area.

The full hike to the bottom of the canyon and back up takes 3.5 hours, but there’s an easy 45-minute loop (longer if you stop for lunch) that has the same great views and is relatively flat most of the time but it’s not stroller friendly.

Follow the red trail markers from Bar Behar (you can come just for the food and view). The trail’s new Hebrew name is Shvil Nof Nahal Katlav. 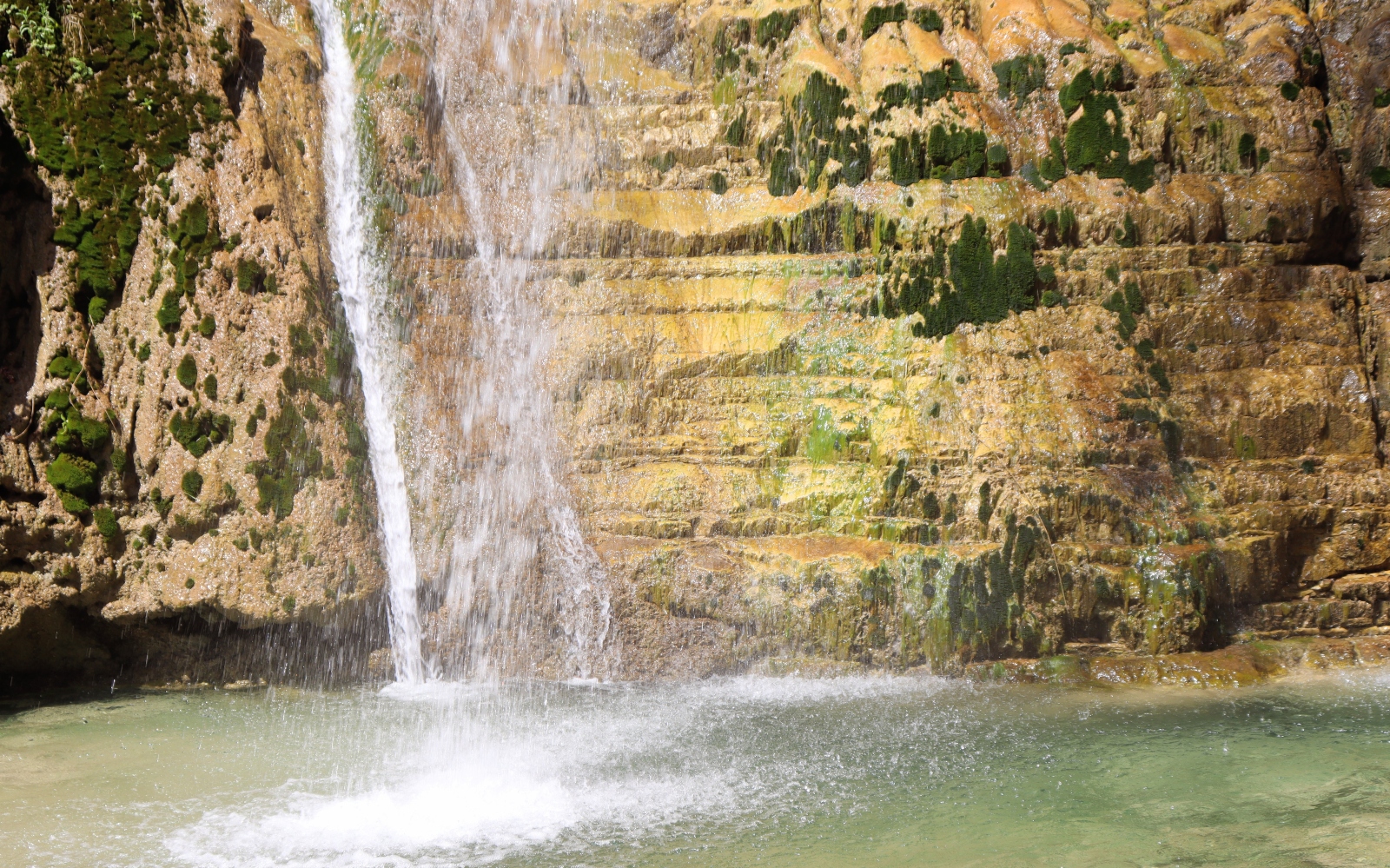 One of the most popular hiking paths in the country, it takes less than an hour (plus the same for the return) to get to the waterfall at the end of Nahal David in the Ein Gedi Nature Reserve in the Dead Sea area.

The beginning of the trail is flat, making it suitable for strollers, although reaching the waterfall requires walking over large rocks. Even if you don’t get all the way, it’s still fun: you’re guaranteed to see some of the reserve’s ubiquitous ibex and hyraxes. 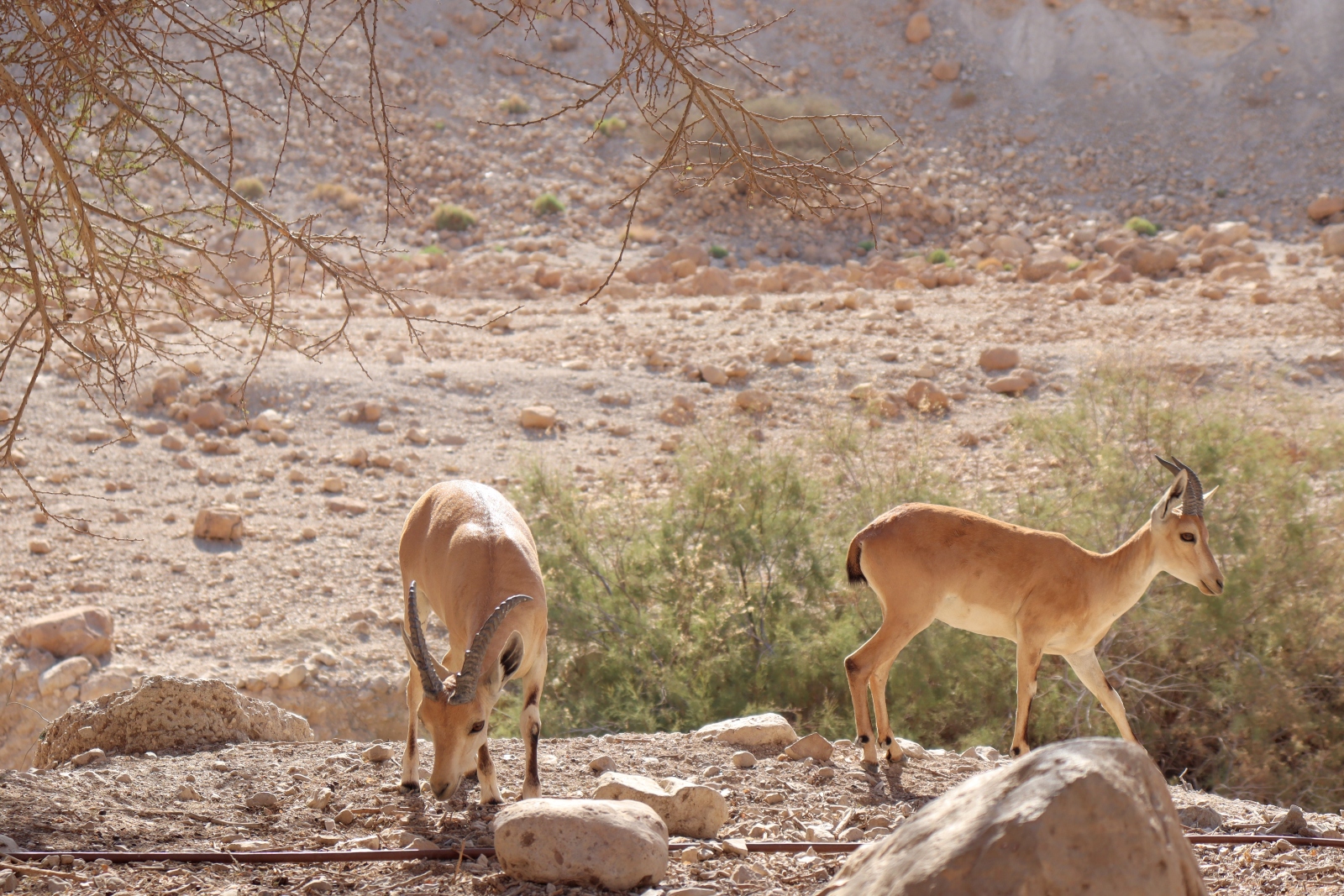 The waterfall is closed for bathing, but there are pools along the way which will call to the kids. Entrance requires payment to the Israel Parks Authority. 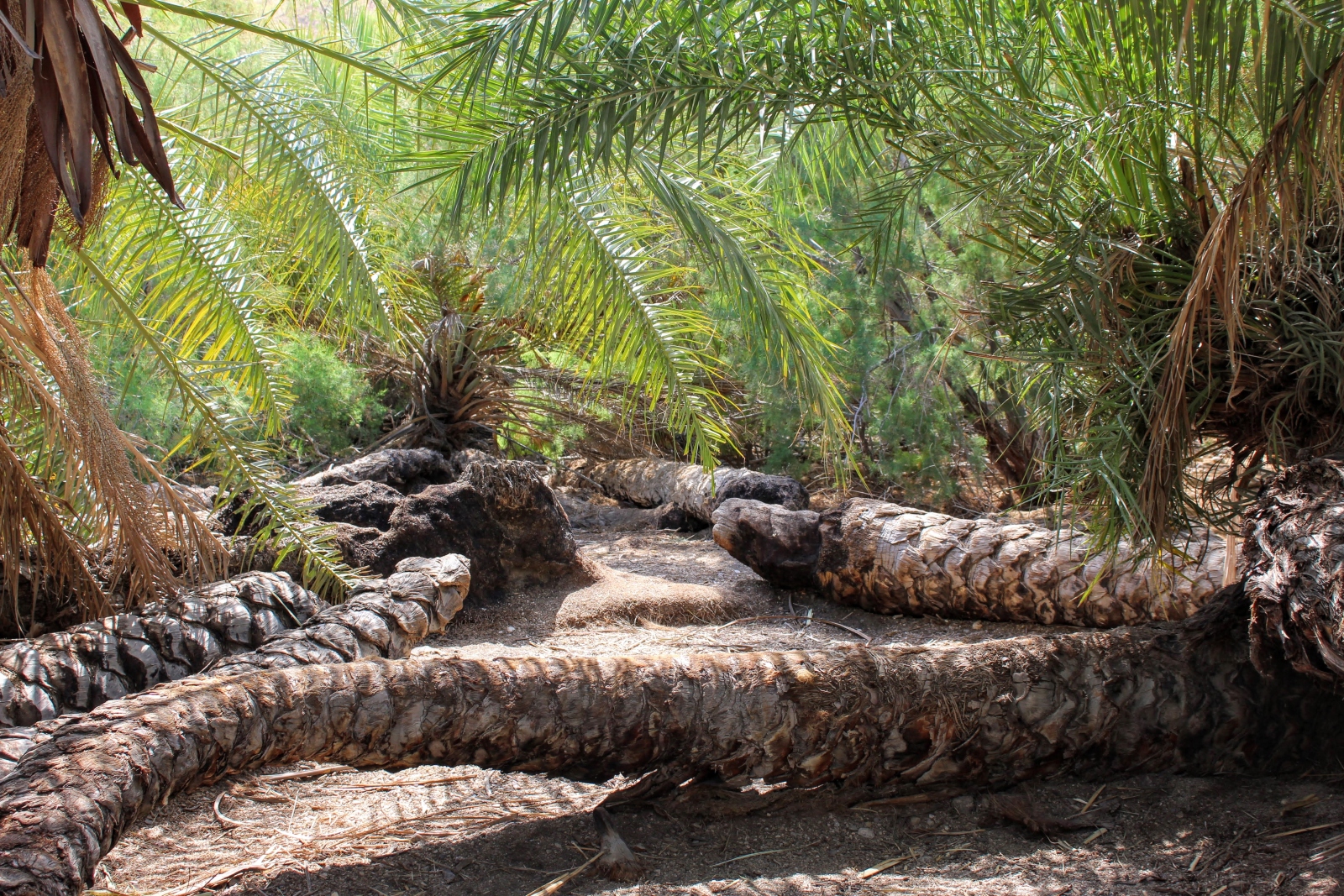 Just 30 minutes north of Ein Gedi, Einot Tsukim is another easy hike to do with kids. The main part of the area – known as Ein Feshka in Arabic – is not a hike at all. Rather, it’s a collection of pools in which you can swim (but don’t drink, they’re too salty).

Tucked away just south of the parking lot is the “hidden reserve,” a 45-minute winding stroll through sparkling springs with a jungle-like atmosphere, far from the desert (and the crowds who come to barbeque and bathe in the pools) around it. The hidden reserve is only open with a guide and reservations are required.

Book English-guided tours ahead by calling 02-994-2355. They’re available on Sundays and Fridays except in July and August. 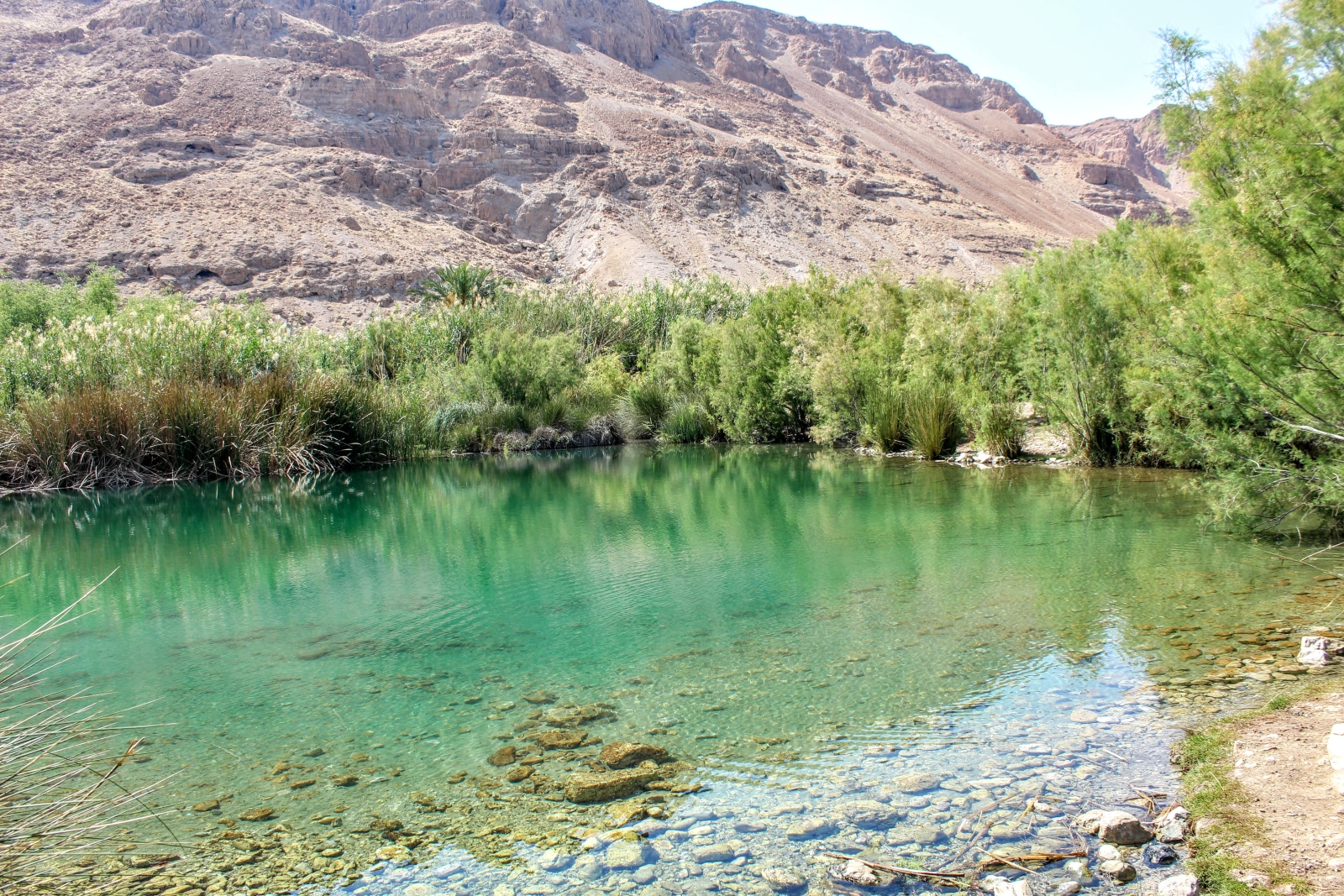 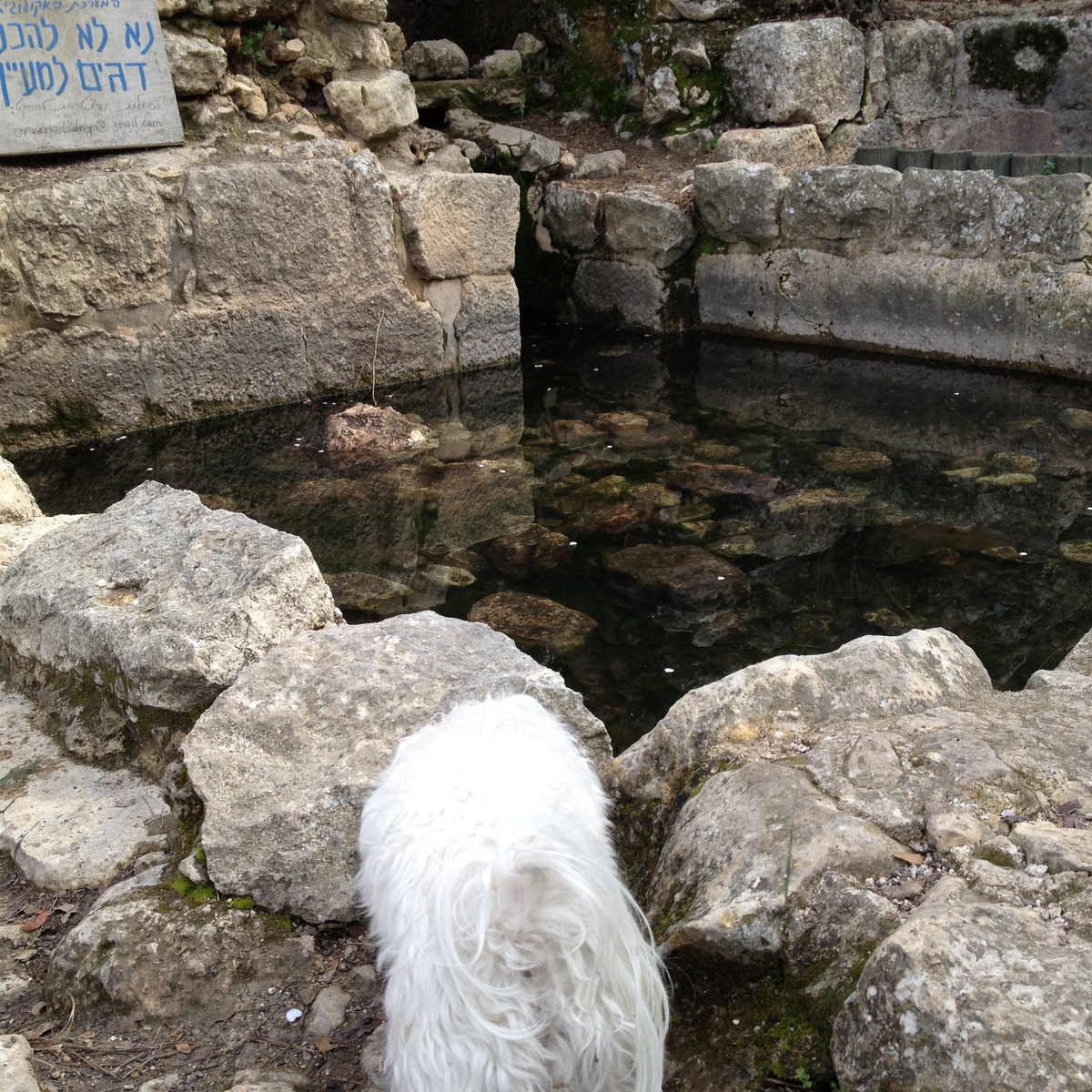 This trail – which runs between Moshav Even Sapir and the Sa’adim ruins near Yad Kennedy in the Judean Hills – is a bit more challenging than the previous three, with a moderately strenuous climb from the parking lot on the Even Sapir side (so no strollers!) but the rewards are the many springs (ma’ayanot) which give the hike its name.

In the winter, the pools are full — although cold — so it’s the views that put this 3-kilometer ridge trail on our list. In the summer, there’s still enough water to dip your toes (or if you’re small enough, dunk your whole body).

There are picnic tables with lots of shade on the Sa’adim end, and Yad Kennedy – a memorial to US President John F. Kennedy – is worth a visit, too. 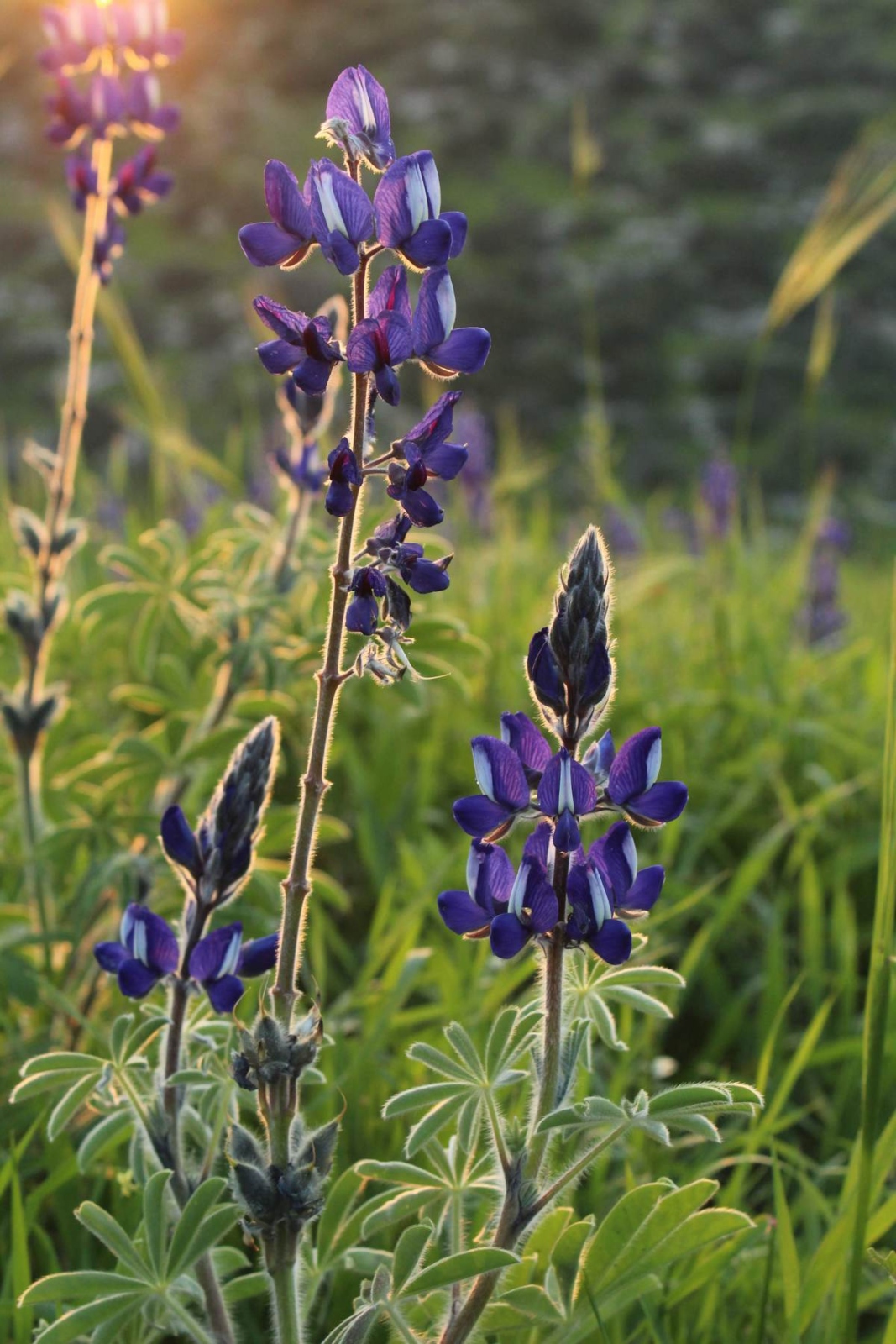 Endless purple lupines are the draw for this kid-friendly hike that draws tens of thousands of visitors every spring for three weeks or so around Purim– the only time of the year when the flowers are in bloom.

The steep hike up the hill takes just 10 minutes. Then it’s time to play hide and seek in the lush beds of wildflowers while Mom and Dad preen to get the best photograph of their offspring amongst the shock of color.

Located off Road 375 near Beit Shemesh, Givat HaTourmasim is a pleasant family stroll even at other times of the year – and you’ll avoid the crowds. 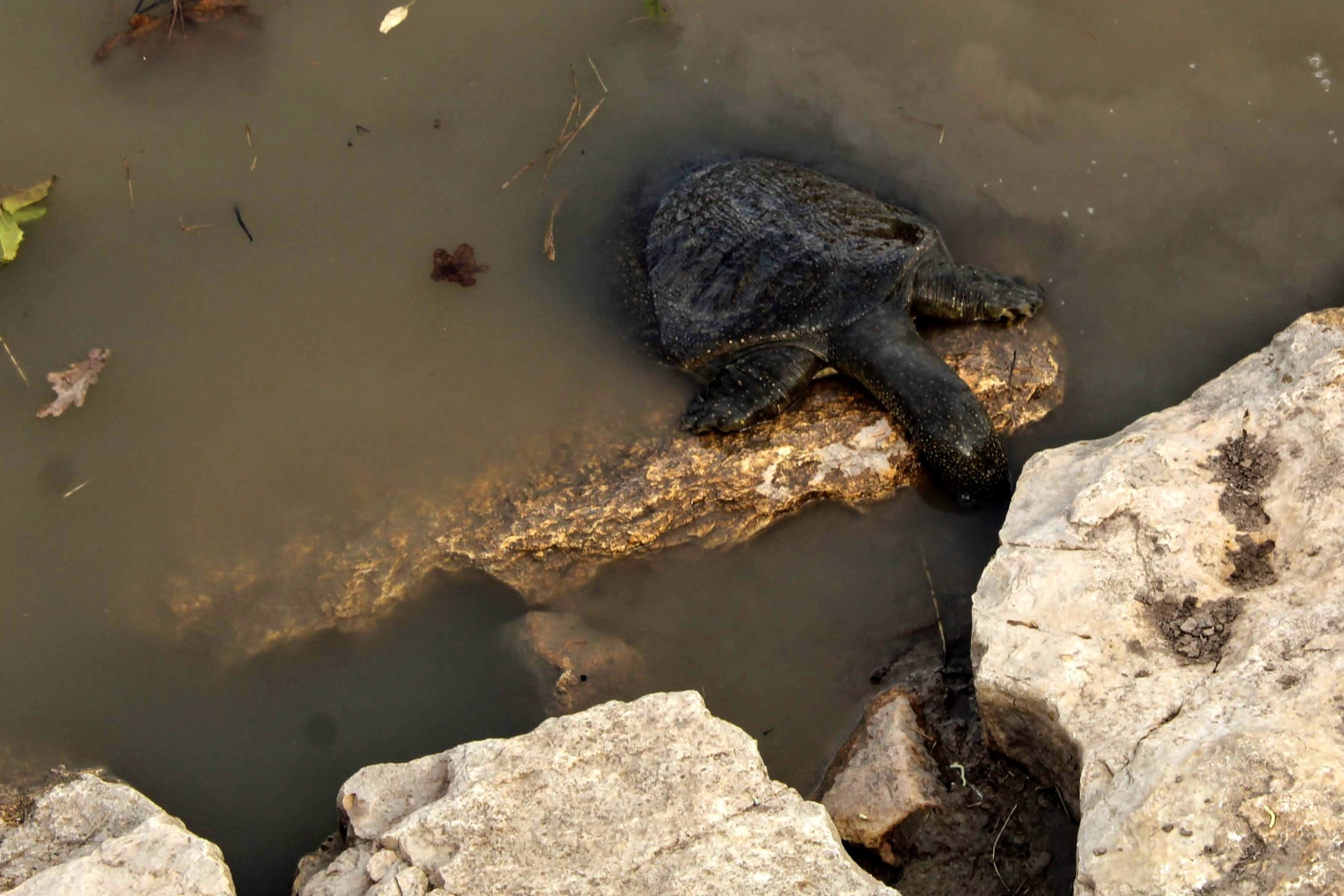 Turtles are the draw for kids at Nahal Alexander. Photo by Susannah Schild

Turtles are the draw for this kid-friendly hike that follows the Alexander River outside of Netanya from Turtle Bridge to the Beit Yannai beach. Drive on coastal Route 2 and get off at the Beit Yanay-Kfar Vitkin exit, then follow the signs to the nahal (river).

The wooden bridge overlooking the water allows animal lovers to gaze down on the giant soft-shelled turtles who wait for visitors to feed them junk food. (Please don’t.) There’s also a big playground and expansive lawn with picnic tables.

If you continue toward the beach, there are no more turtles, but plenty of flowers and eucalyptus trees. The Alexander River was famously polluted until the start of a reclamation project in 1995. The clean-up work won the International River Prize in 2003.

The Dan stream is the largest and most important source of water for the Jordan River. It starts in the Galilee panhandle at the Tel Dan Nature Reserve, where the Israel Parks Authority has made sure to make at least part of the site accessible to strollers.

And there’s so much to see along the path: the stream itself (positively gushing these days, fed by melting snows from Mount Hermon); the remains of a 5,000-year-old Canaanite city; the mud brick seven-meter high Abraham Gate; an ancient flour mill (which was operational until the 1960s); and a site for rituals that evokes biblical stories of animal sacrifices. There are wading pools in the site, including one along the accessible trail. 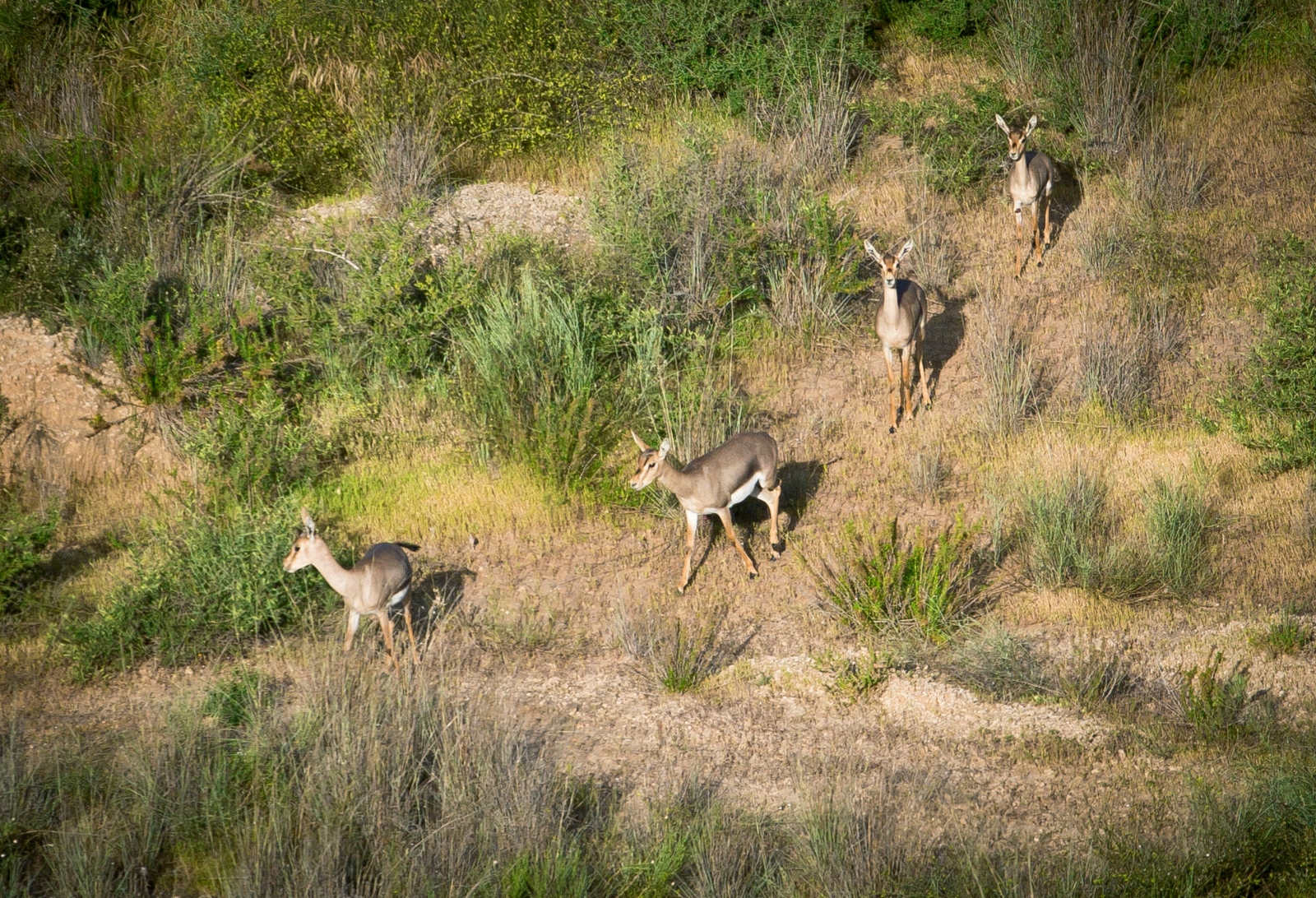 Deer at the Nitzanim Sand Dunes in southern Israel. Photo by Moshe Shai/FLASH90

Midway between Ashdod and Ashkelon is one of Israel’s prettiest beaches – Nitzanim. But there’s more to the area than paddleball and waves.

A hike from the parking lot along the red trail will take you to an “accidental” lake and then to the area’s famous sand dunes – an irresistible draw for youngsters and the young at heart.

The dunes are high, allowing intrepid climbers to take running jumps knowing they will land safely in the soft sand below. We call the lake accidental because it was created when developers dug into an underground aquifer by mistake, resulting in a freshwater lake. 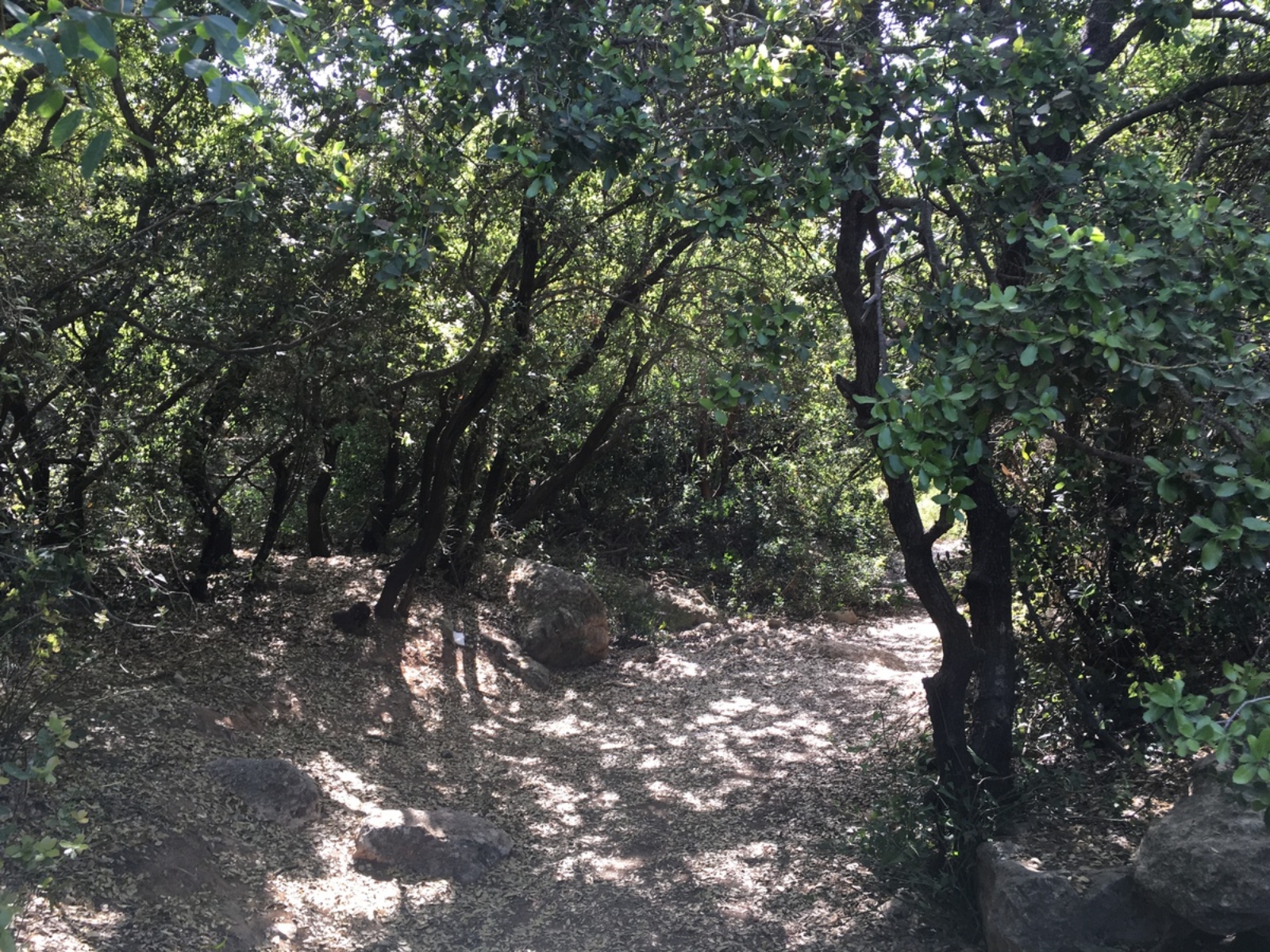 A trail leading to Twins Cave. Photo by Brian Blum

We would be remiss if we didn’t include at least one caving experience in our list of kid-friendly hikes. The Twins Cave in the Beit Shemesh area is one of the more accessible – and has the added benefit of bats!

Ma’arat HaTe’umim is a 40-minute walk (each way) from the parking lot for Nahal Dolev on the red trail. The path has rocks to climb over in parts, so strollers are not recommended. Bring flashlights to spot resting bats on the cave’s ceiling. (The cave is closed from November to March so as not to interfere with the bat’s lifecycle.)

Just past the cave is a natural rockslide that’s so smooth, kids will have to be dragged away from the fun. If you’re really adventurous, you can continue past the cave all the way to Bar Behar, but that’s not one we’d recommend for anyone under the age of 10.

The last thing you’d think looking at the towering Mount Arbel, some 390 meters above the Sea of Galilee, is that this would be a kid-friendly hike. But you don’t have to hike all the way up the mountain to enjoy its stunning views.

Drive to the top, pay your entrance fee to enter Mount Arbel National Park, then take the easy black trail to the lookout points, where you can gaze at the seemingly endless sea and its farmland surroundings.

Continue on the blue trail to another lookout point, then return on the black trail. You won’t be out for more than an hour, but the views will stay with you forever.

The helpful Hiking in the Holyland website has more details on many of these kid-friendly treks as well as links to trail maps and Waze directions.

Become a GEM member
Read more on:   Travel, Environment, Hiking in Israel, Things to do with kids