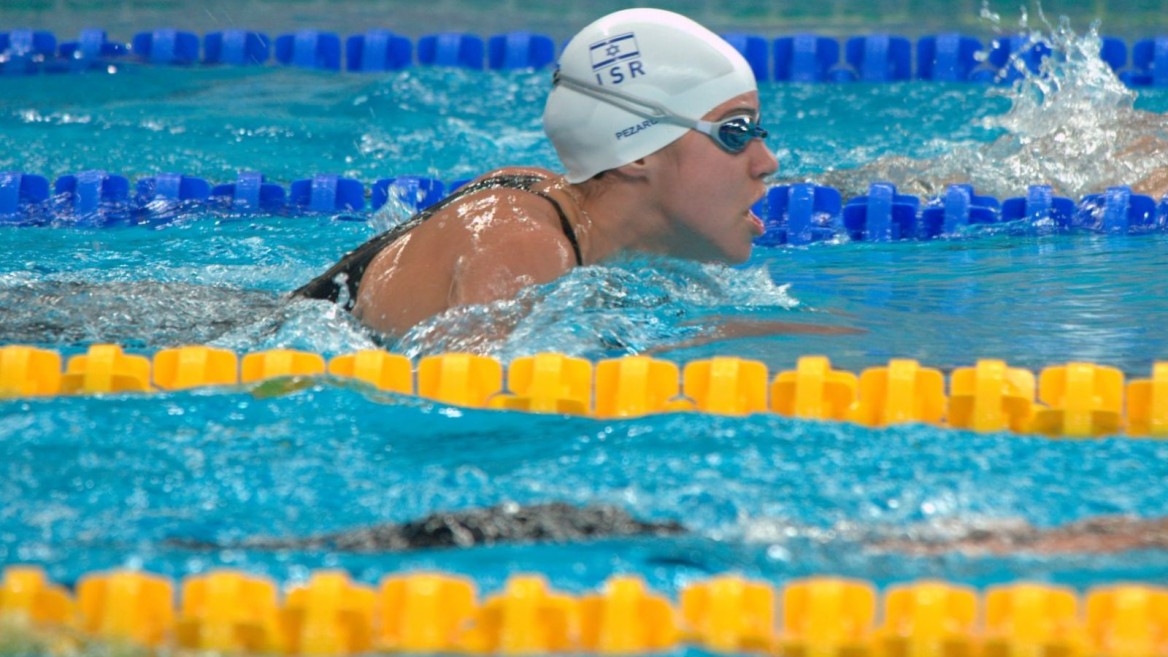 “I feel much more committed than I did in 2012,” Pezaro tells ISRAEL21c. “I’m a different person with each Paralympics.”

In Rio, Pezaro will swim the relay as well as the 50- and 100-meter freestyle, 100-meter breaststroke and 200-meter medley events.

In the 2015 World Swimming Championship in Scotland, Pezaro won two silver medals and a bronze, securing her place as one of Israel’s 30 athletes on the Rio roster.

“My mother keeps all of them for me,” she confides. “It’s not like you get up once a week and want to look at your medals. They’re a symbol; a piece of metal. They’re not the most worthy thing I have in my life. But they do mean a lot for the country I represent and how high the flag is raised up.”

The country is indeed proud of Pezaro’s athletic accomplishments. In 2002 she was chosen to light one of the torches at the national Independence Day ceremony, and in 2007 she was named Sportswoman of the Year by the Israeli Association for Disabled Sports. 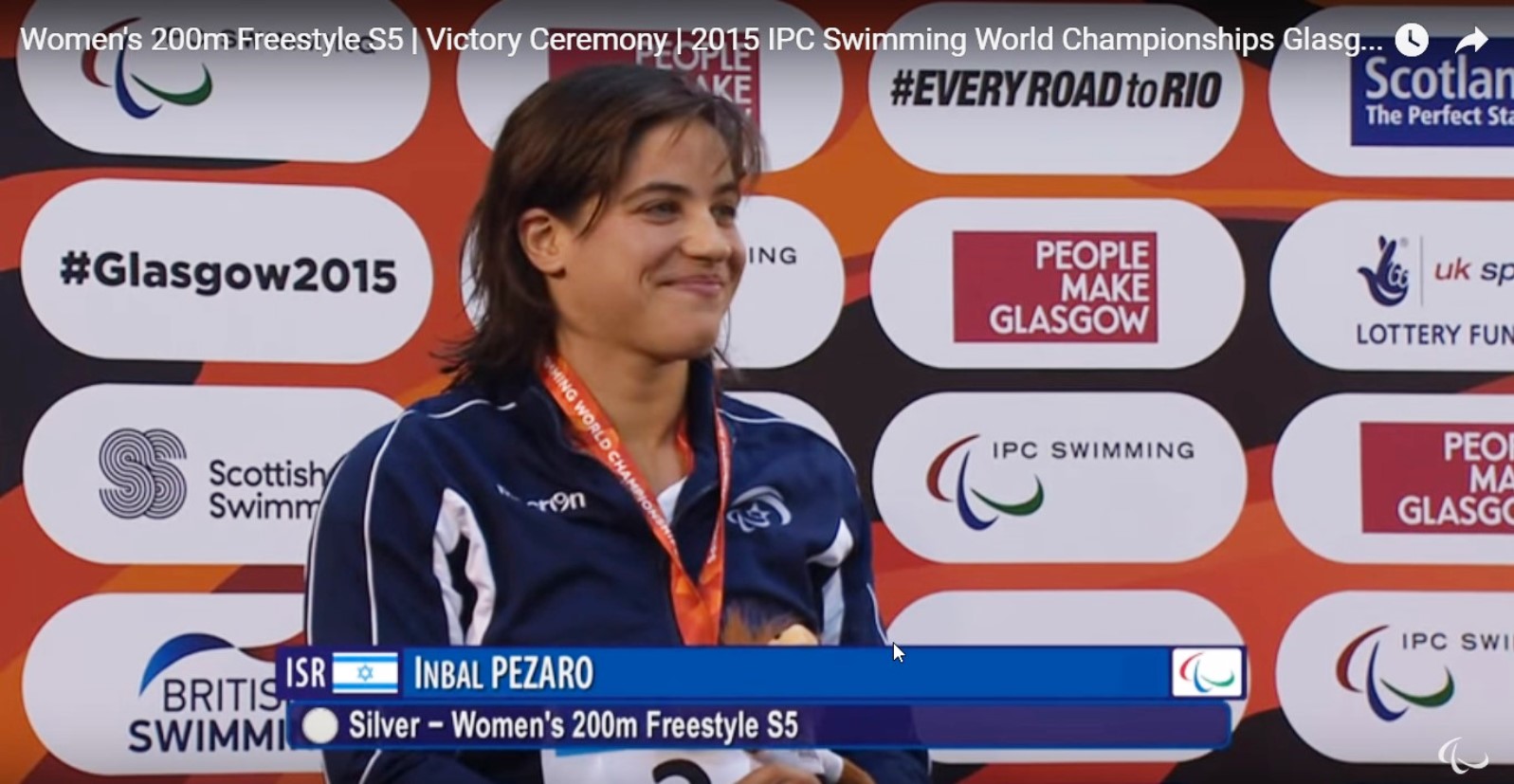 Inbal Pezaro on the podium at the 2015 World Swimming Championship in Glasgow. Photo: screenshot

Pezaro speaks perfect English as her parents are from New Zealand and raised her in an English-speaking home on Kibbutz Yizra’el, where she still lives.

With paralysis in her legs from birth, Pezaro was five when she began swimming in the pool at the Haifa sports center run by ILAN-Israeli Association for Children with Disabilities. She started competing at 11.

Pezaro also enjoys skiing, but being in the water “shows me that I can never know what I can really do, that I can always be better. I already take it a bit for granted, but for me, not being able to walk, no other sport would give me the kind of freedom swimming gives me to stand and have full mobility,” says Pezaro, who has trained under Yakov Beinenson for the last 16 years.

Though she was exempt from army service, she chose to volunteer as a swimming instructor in a naval commando unit. 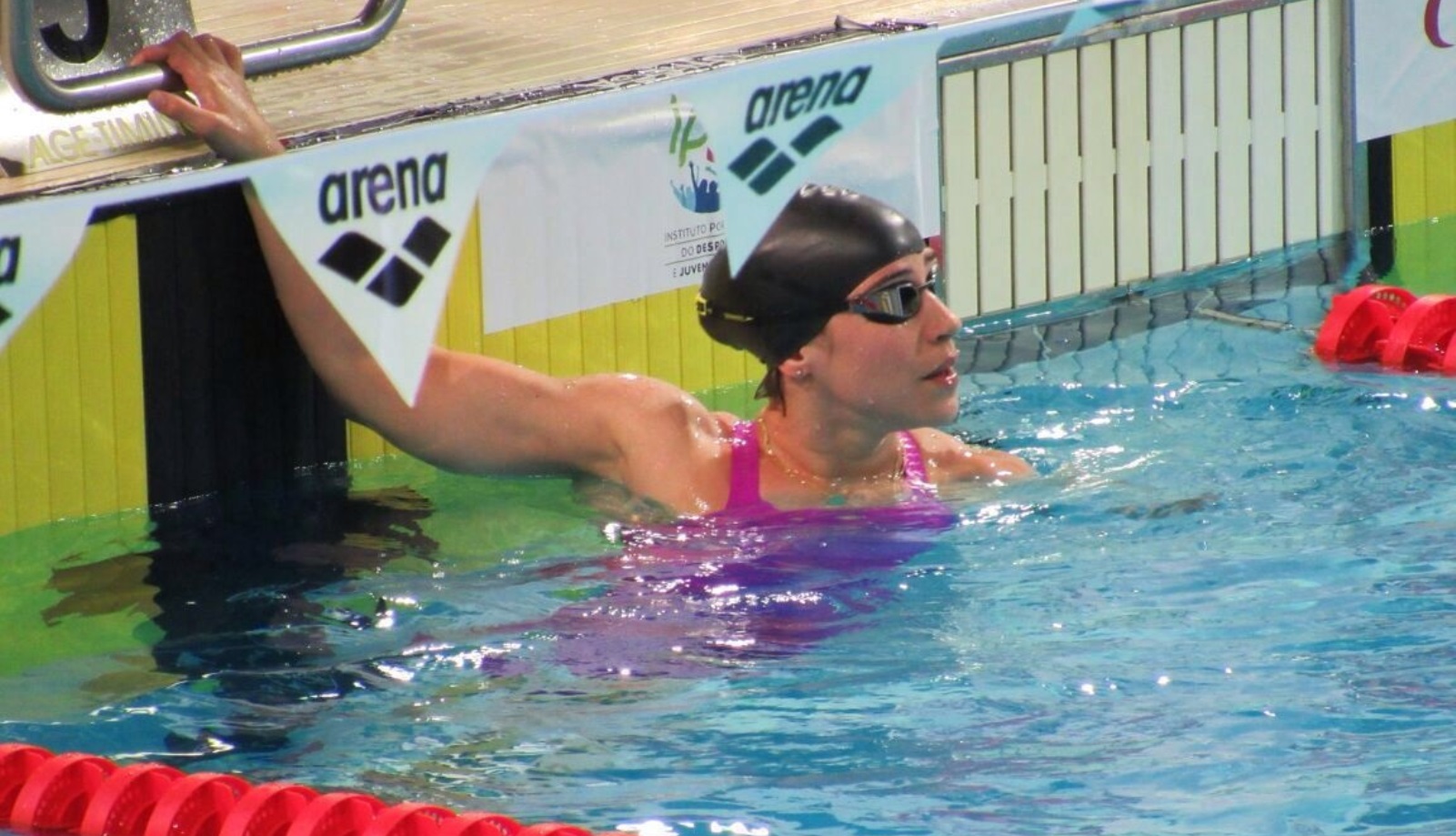 Inbal Pezaro has been swimming since age five. Photo by Karen Leibivitz Swet

Her preparation for Rio has been hampered somewhat by an illness in July. “I’m supposed to do about 10 or 11 water training sessions per week, and the rest in the gym,” she said in early August, “but I haven’t been well for the last month so I am only now starting to get back on track.”

Most importantly, she adds, “I think it’s all about the way I prepare myself mentally.”

Rio may be the last Paralympics in which Pezaro will compete, as she wants to begin academic studies after returning from the September 7-18 Games. (Fortunately, the school year for higher education in Israel begins only after the high holidays in October.)

Yet in keeping with her overall outlook, she’s concentrating more on doing her personal best than on bringing home another medal.

“The most important thing for me is to feel that I finished the race and gave everything I could, that I gave my best performance. I focus on that, not on the place or the time. I can only give my best,” Pezaro says.

Click on the video below to watch Pezaro trying a ReWalk robotic exoskeleton, an Israeli invention.