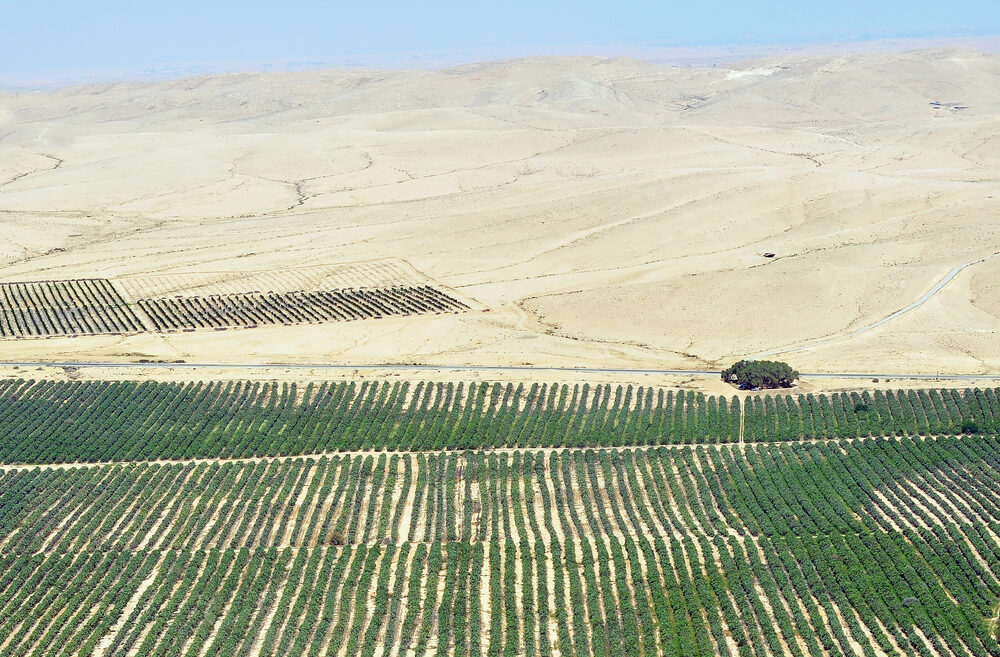 Farming in the Israeli desert. Photo by Shutterstock

Farmers in arid areas of India need no convincing that the climate is changing under their feet. Their income is drying up along with their groundwater wells, forcing many to give up farming.

His team assesses agriculture, water and energy problems in rural Asia and Africa and finds Israeli technologies to solve them. 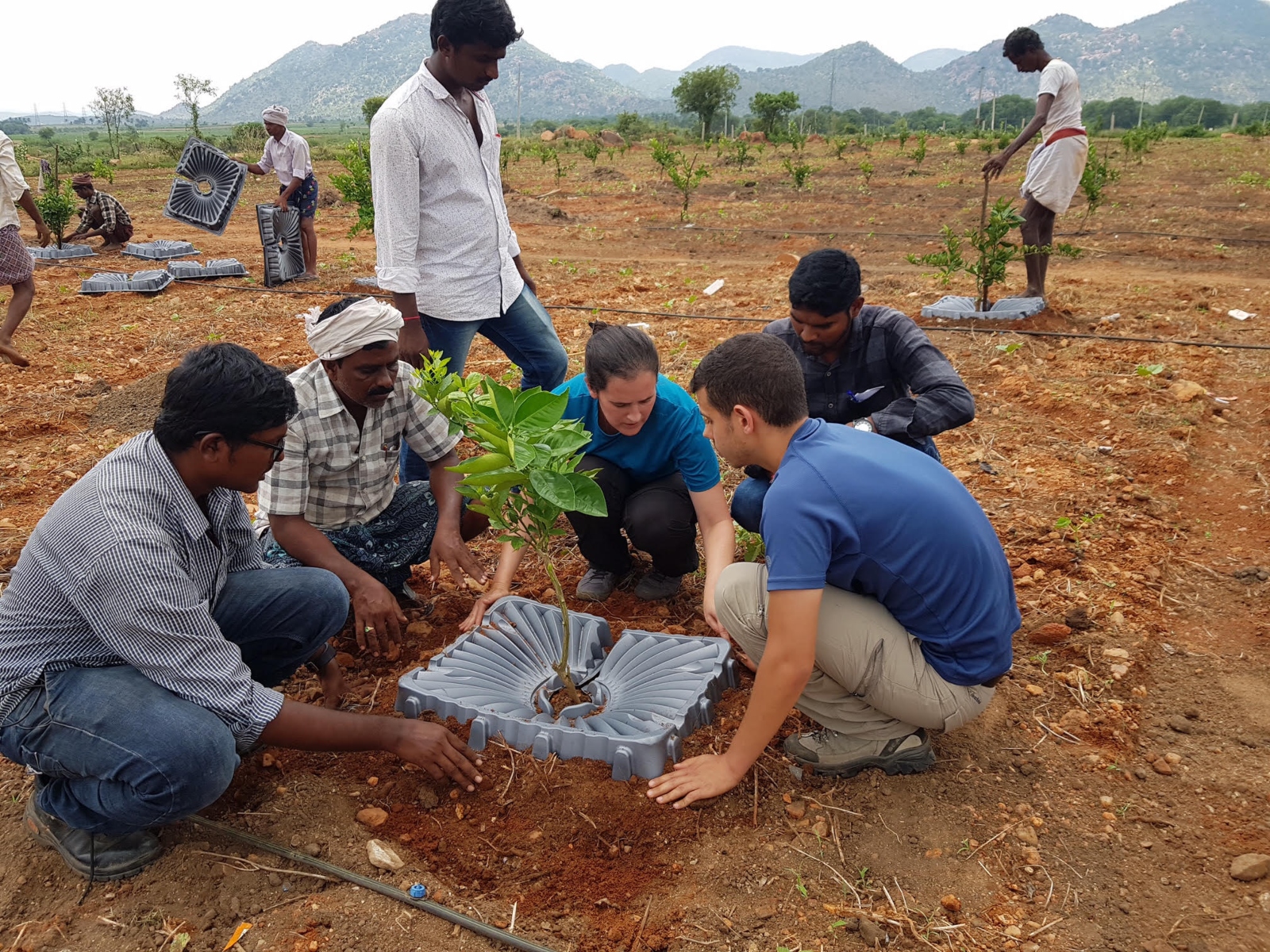 “Many farmers around the world look to Israel as a model of how to manage and flourish in conditions of water scarcity and a hotter, drier climate,” Fishman tells ISRAEL21c.

That’s true in both developed and developing economies. For example, Ben-Gurion University of the Negev’s Zuckerberg Institute for Water Research and Jacob Blaustein Institutes for Desert Research work with partners in several US states on projects related to the changing conditions.

Fishman, however, sees the potential to make the greatest difference in developing countries. Millions of smallholder farmers in Africa and Asia serve enormous markets but don’t have the resources to buy and implement Israeli solutions as easily as do American and European farmers. 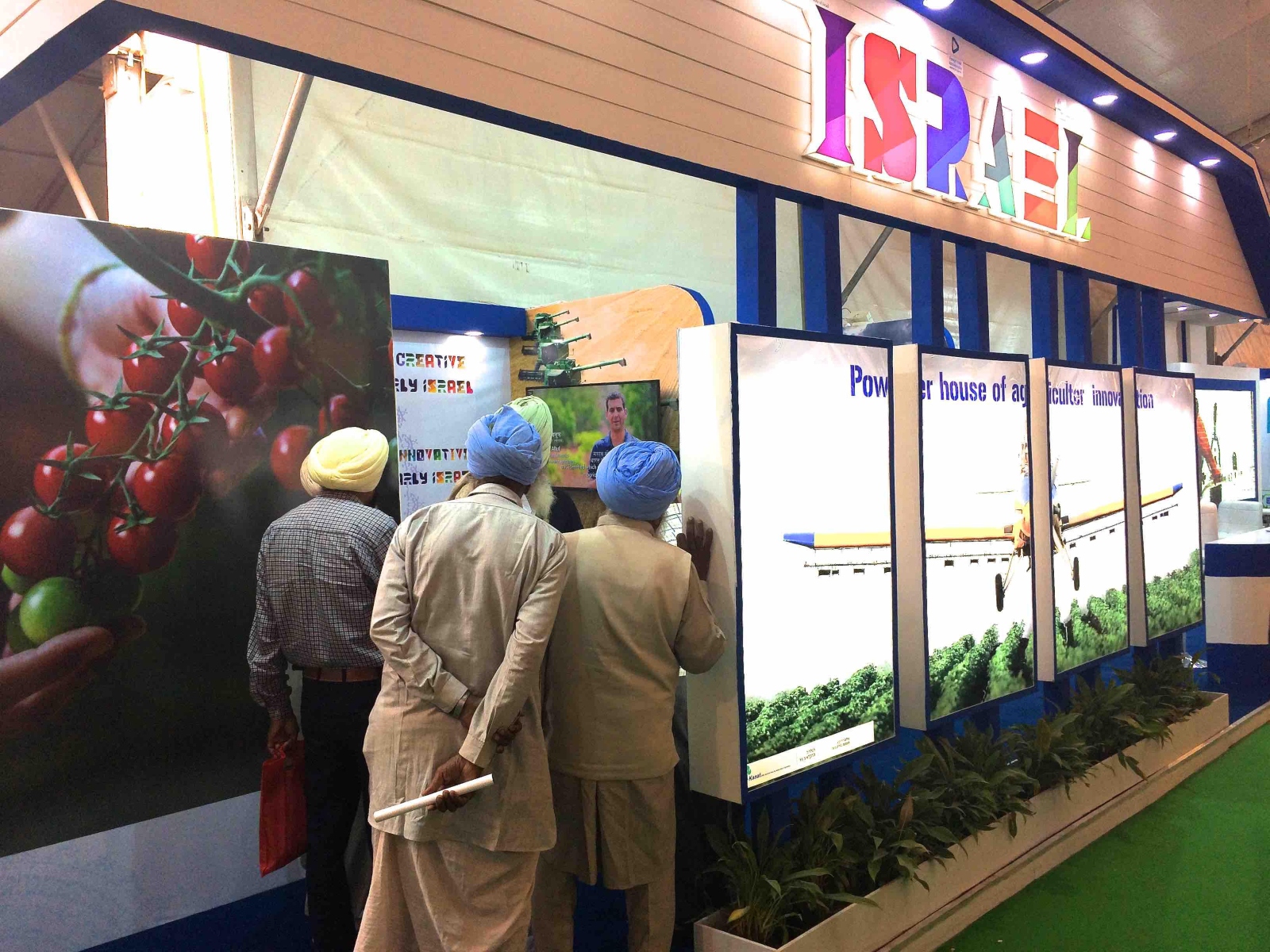 “In Africa and Asia, they see Israel as the source of solutions. Sometimes they have exaggerated notions of what Israel can do and how it manages without enough water. But even if blown a little out of proportion, there is a lot of truth in that notion,” Fishman says.

“We do have an amazing amount of knowledge and experience from agronomists, farmers, companies and R&D centers. Our lab’s purpose is to be a bridge between these smallholder farmers and Israeli expertise and technology.”

Summers are getting hotter

Since its founding in 1948, Israel has never stopped inventing agricultural technologies that greatly improve farming everywhere.

Continuing ag-tech innovation enables farmers to use water and fertilizer more efficiently, grow crops resistant to disease and drought, and harness data above and below ground to increase quality and quantity.

Plant scientist Tamir Klein, principal investigator at the Weizmann Institute of Science’s Tree Lab, specializes in dryland forestry. He hears a lot of concern about how fruit orchards will cope with hotter, drier conditions across the globe.

“Not a single day goes by when I am not answering inquiries from colleagues from abroad,” Klein tells ISRAEL21c.

“If the world is becoming hotter and drier and we’re already hot and dry and have success in agriculture in those conditions, the world can look at our successes and mistakes and decide how to go forward.”

“Summers are getting hotter. Carbon dioxide is warming the planet and we have more drought,” he says. “We are trying to look everywhere we can to think out of the box and find solutions.”

“The Negev is part of the Sahara-Arabian desert belt and is one of most arid places on Earth. The desert in the United States is wetter and cooler; it looks like a garden in comparison,” says Klein.

Yatir Forest, planted by the Jewish National Fund to provide work for new immigrants in the 1950s, has turned into one of the world’s only fully functional forests in hot semiarid conditions. Klein’s PhD mentor, Dan Yakir, received a 2019 Israel Prize for uncovering mechanisms that enable trees to survive there.

“In dryland forestry, we are making important contributions. What we have in Israel is the driest forest in the world,” says Klein.

His team discovered wild native almond trees flourishing in a dry riverbed near Mount Ramon in the Negev.

“This is amazing in such a dry landscape,” says Klein. 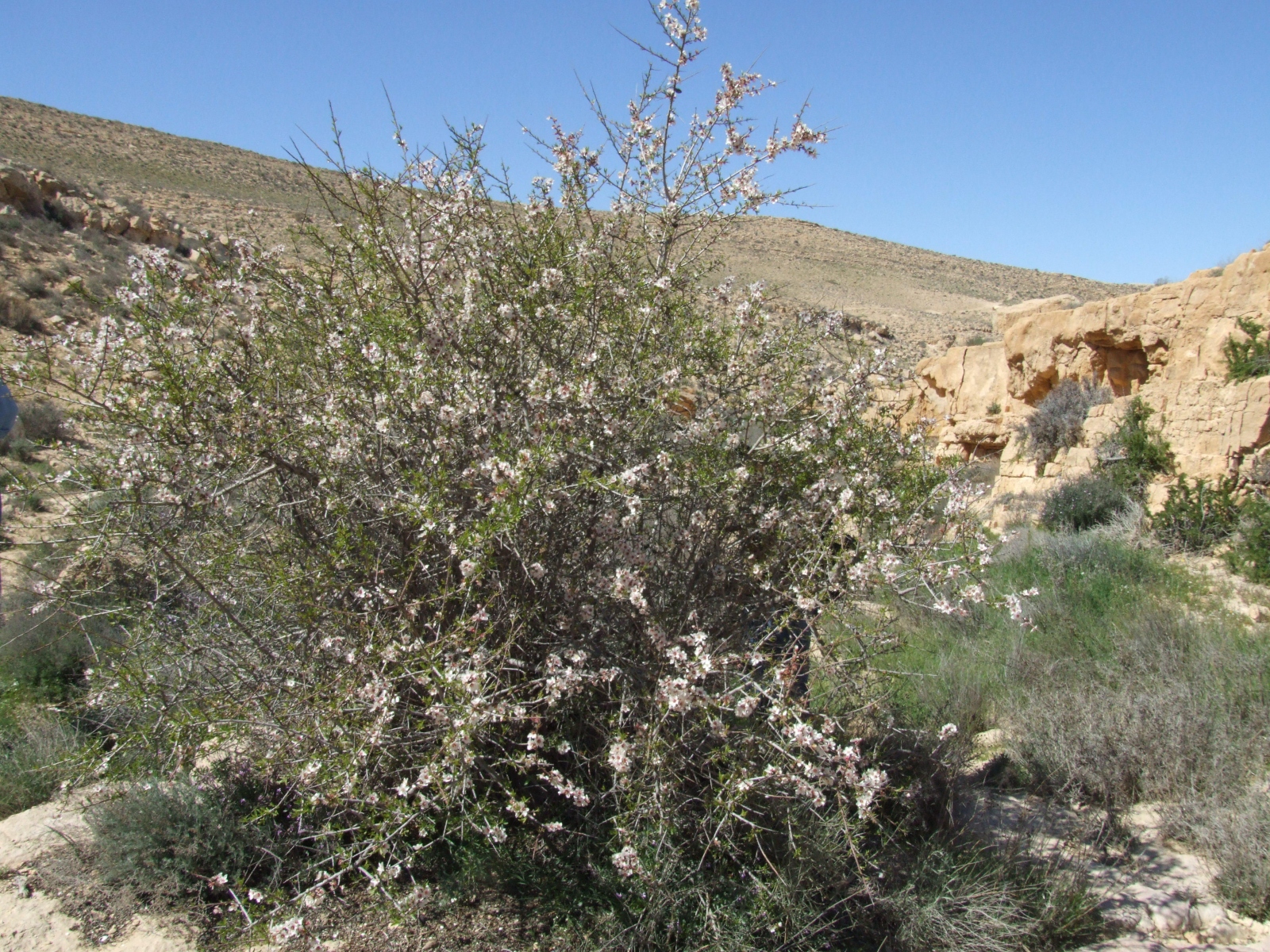 Growing Ramon almond seedlings under controlled greenhouse conditions, the Weizmann scientists learned that due to their ability to resist embolisms – tiny air bubbles that block trees’ water vessels — these trees tolerate drought much better than do almond trees in commercial orchards.

“What we have discovered about embolism resistance could help almond growers all over the world,” says Klein. “We can use the Ramon almond as a future rootstock in the drier, hotter future that is awaiting us.” 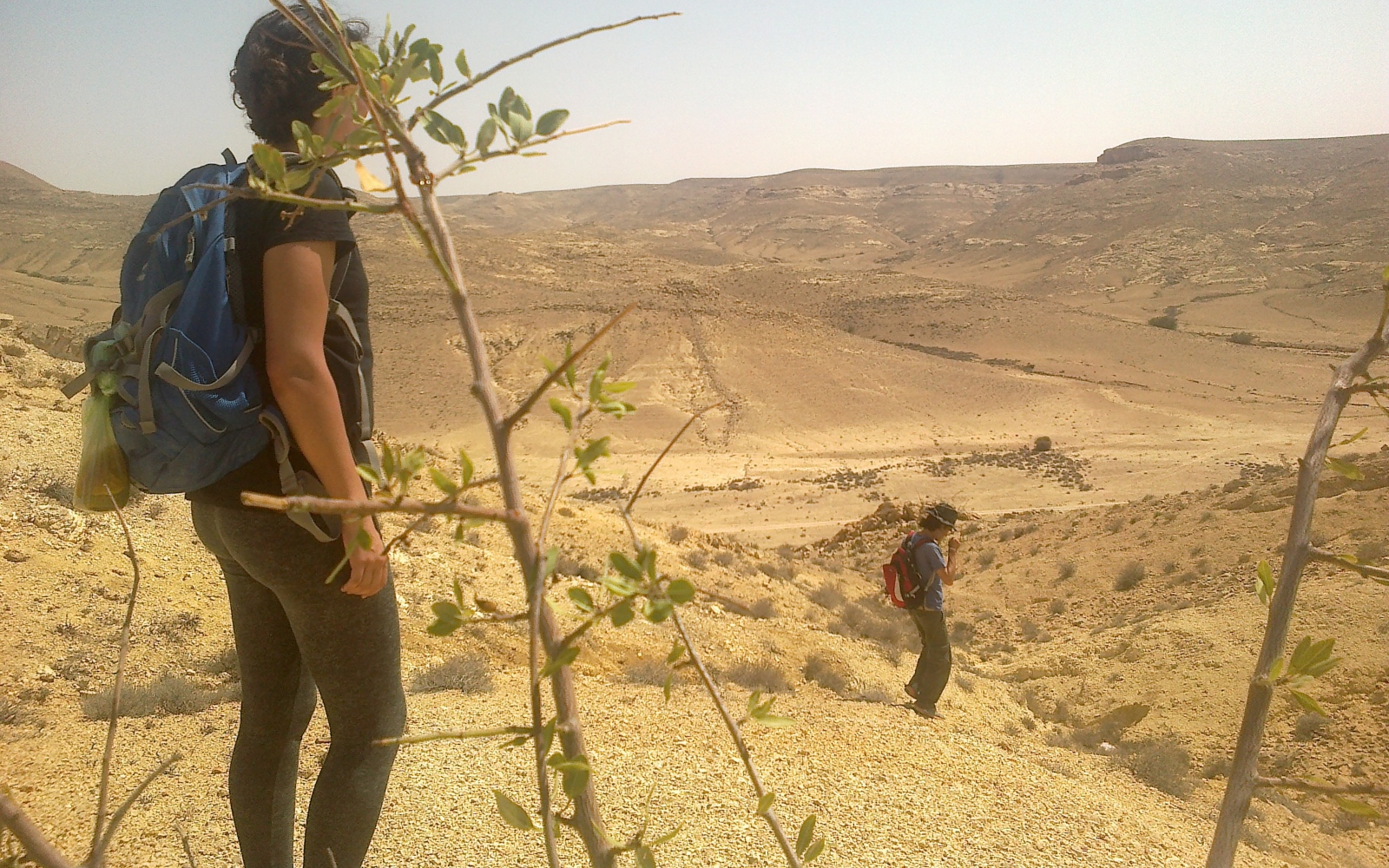 The Tree Lab also studies the effect of rising CO2 levels in the atmosphere from human activity such as transportation and air conditioning. This causes warming and severe droughts, says Klein.

With colleagues at the Volcani Center-Agricultural Research Organization’s Gilat Research Center in the Negev, his lab found that lemon trees there close their stomata— like the pores of our skin – after absorbing enough carbon, preventing CO2 overload and water loss.

“Yes, the climate will be warming and drying. But species that can close their stomata can survive drought because they have this built-in regulation system,” says Klein.

“It doesn’t mean trees can handle elevated CO2 with no problem; they need the right nutrients and light,” he adds. “What we now know might affect how we give predictions of CO2 effects on trees in the future.” 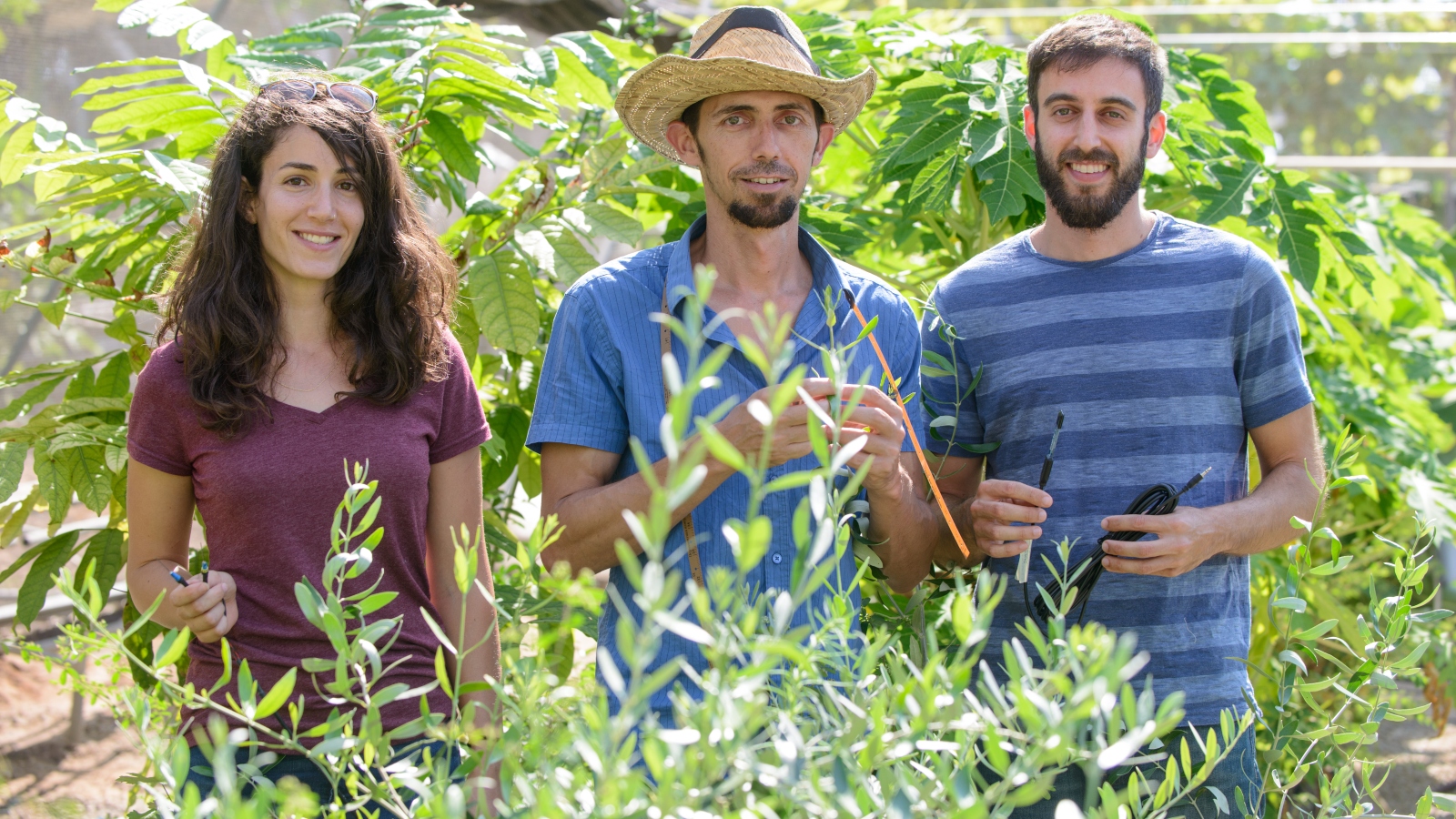 “Israel is ahead of the world in being extremely efficient with water because water is scarce and valuable and we want to encourage agriculture, so we are on the forefront of technologies and techniques,” Ben-Gal tells ISRAEL21c.

“Drip irrigation is the flagship technology, but we also consider seed breeding, choice of crops, use of protected agriculture in greenhouses and nethouses, and scheduling irrigation based on data gathered in many different ways,” he says.

“All those things are great, and the rest of the world is doing it too — when they can afford it. A big issue is that we are a first-world economy and much of the world that needs this technology is not.”

As a result, farmers in many places still use wasteful, inefficient flood irrigation. “India and China are starting to put drip irrigation in place, but it’s not always accompanied by smart management,” says Ben-Gal.

“I am in constant contact with other countries to work together with them on using those technologies better. I spent six months last year in Ethiopia looking for academic approaches to bridge gaps in knowledge in order to advance agriculture as I do in Israel,” he says. 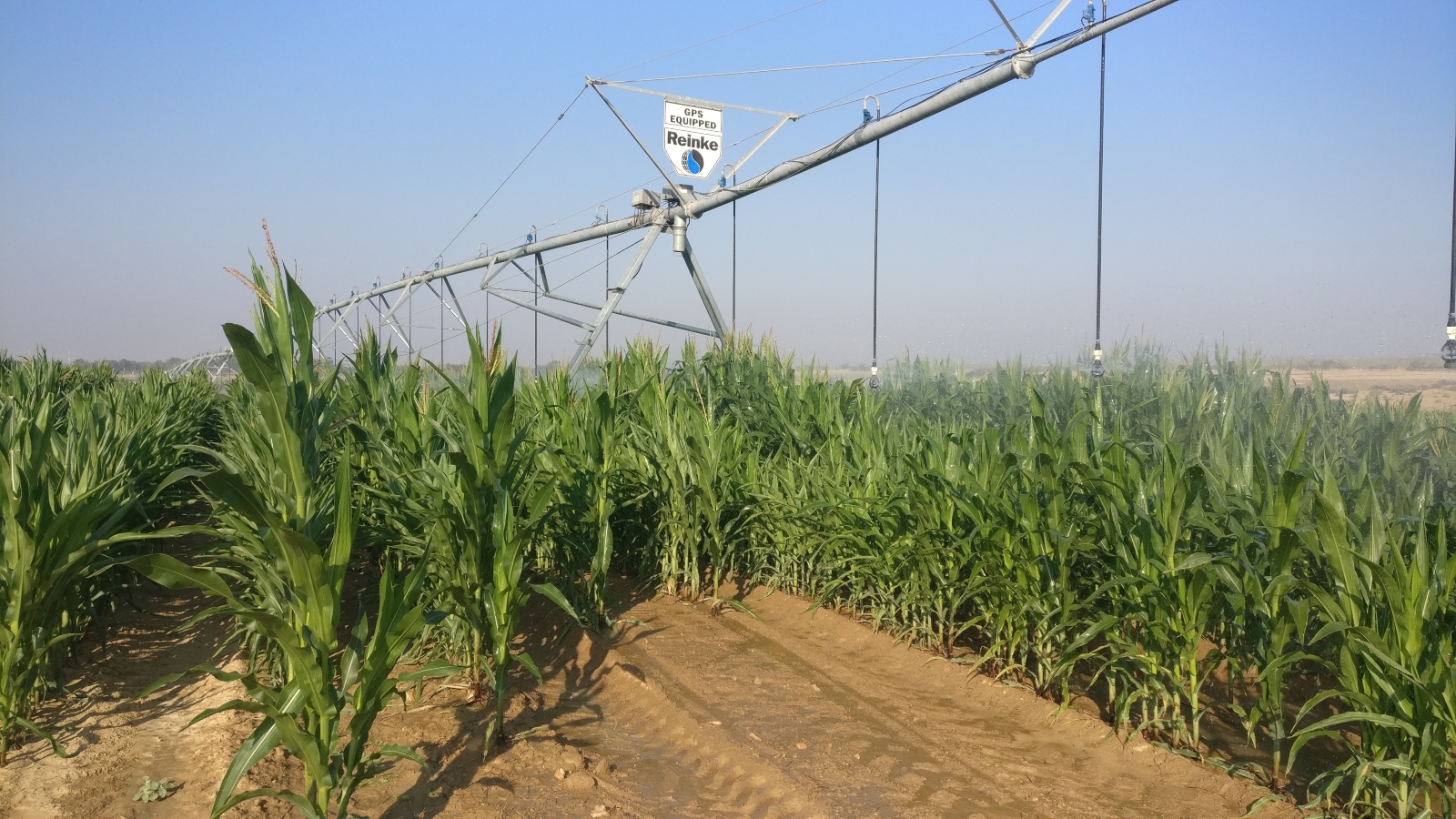 This variable-rate center-pivot sprinkler irrigation of corn (maize) at the Gilat Research Center in the Negev uses data for precision decision-making. Photo by Dr. Alon Ben-Gal

Ben-Gal interacts regularly with peers in Europe, the US and China doing similar kinds of research.

“If the world is becoming hotter and drier and we’re already hot and dry and have success in agriculture in those conditions, the world can look at our successes and mistakes and decide how to go forward.”

One surprising mistake, according to Ben-Gal, is recycling municipal wastewater for use in agriculture – ironically, a practice many countries want to emulate because of its success in Israel.

But it’s becoming apparent that the salts added to agricultural fields when applying treated wastewater can decrease yield and harm the environment over time. Same goes for using natural brackish water to grow produce in the Negev Highlands and Arava Valley.

“We are starting to see it is not sustainable,” says Ben-Gal. 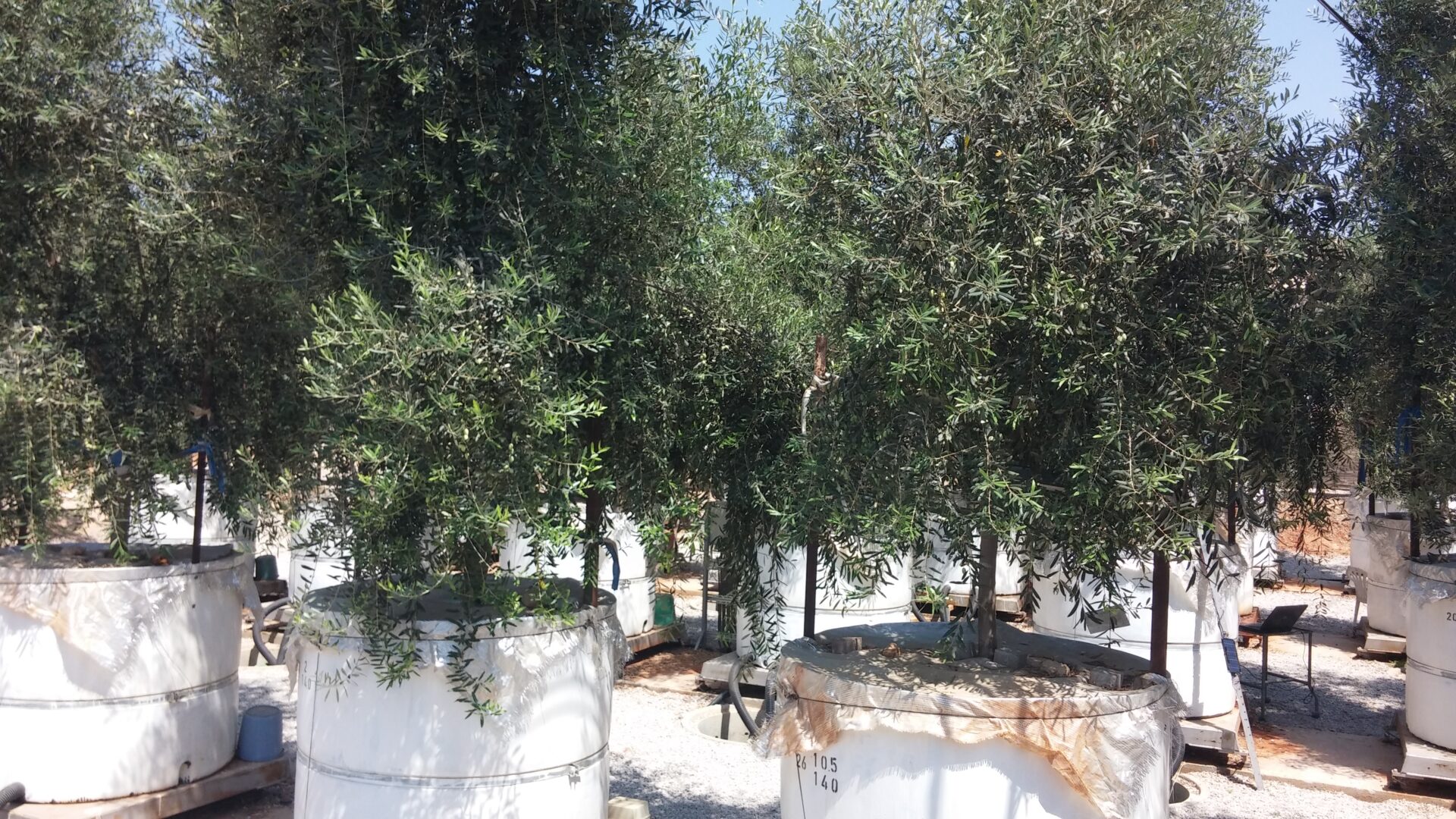 A controlled study of the effect of irrigation-induced salinity on olives at the Volcani Center’s Gilat Research Center. Photo by Dr. Alon Ben-Gal

“We are sharing, and should be sharing, our knowledge about using drip irrigation. In the use of low-quality water, we should share our lessons learned,” says Ben-Gal.

“While many farmers in India have adopted drip irrigation, the challenge is to find a creative business model that can make this and other technologies accessible and affordable to the smallest of farmers,” Tel Aviv University’s Fishman says.

Another challenge is that drip irrigation is more often used for vegetables and fruits, not for field crops like rice, wheat and maize most frequently grown in developing countries.

With that problem in mind, the pioneering Israeli irrigation company Netafim has developed drip-irrigation systems for rice growers, piloted in California in 2016 and recently in India in cooperation with Tamil Nadu Agricultural University.

According to Netafim, “Rice grown with drip irrigation not only outproduces conventional paddy rice, but also uses 70% less water, diminishes methane emissions to almost zero, and reduces arsenic uptake by up to 90%.” 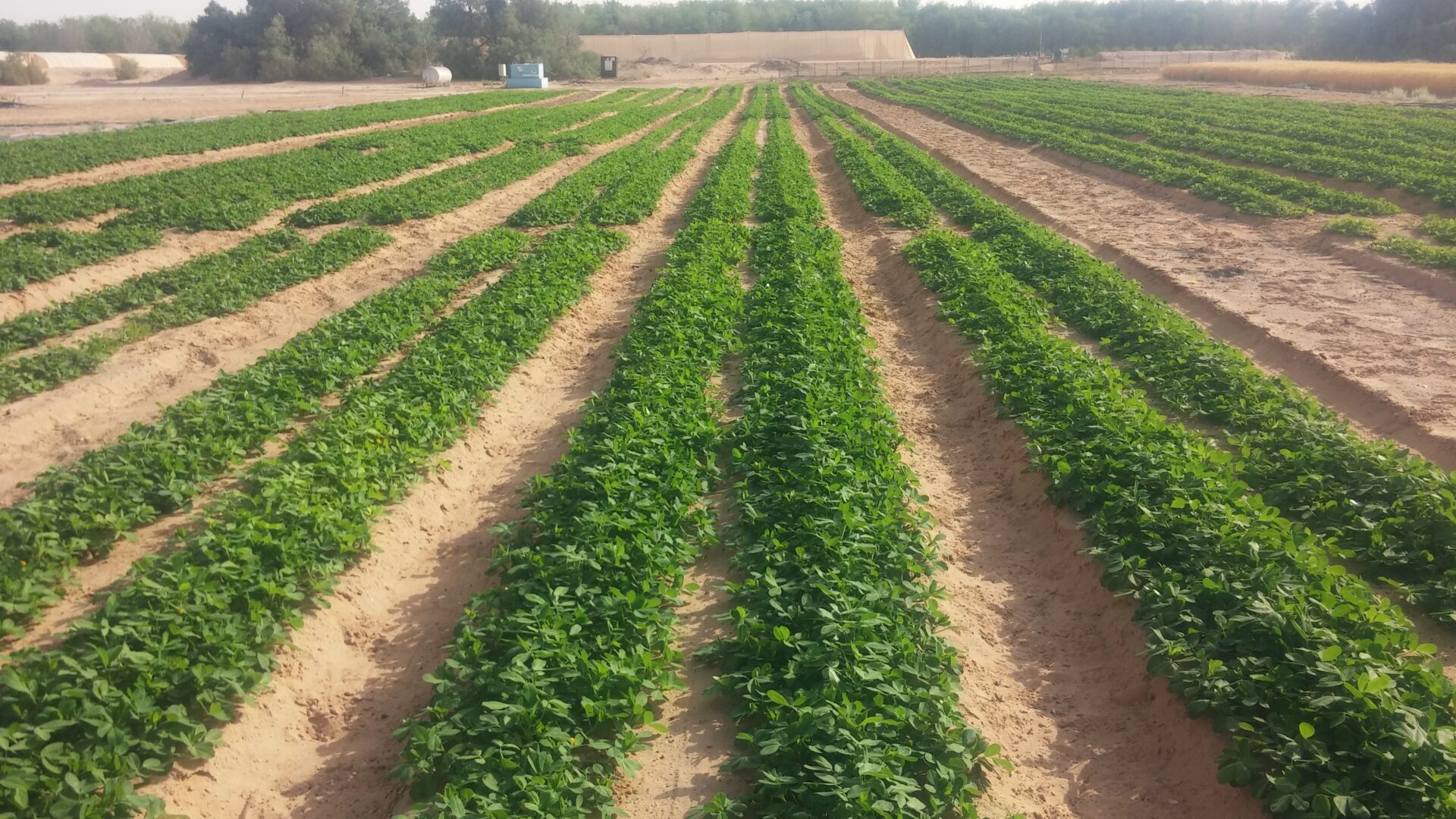 This peanut field at Southern Arava Research and Development is irrigated with water of varying quality on varying schedules. Photo by Dr. Alon Ben-Gal

Fishman says widespread implementation of this system would be game-changing from a climate and water perspective. That won’t happen unless it’s affordable.

Some expensive Israeli ag-tech solutions easily adopted in the Western world need to be available in “no frills” versions for millions of smallholder farmers in Asia and Africa, says Fishman.

“They’re starting from zero, so even a basic model with less functionality will make a big impact. All our colleagues in India are talking about that,” he says.

“I’m a passionate believer in the potential of Israeli technology to enable Israel to have a disproportionate impact on sustainable agriculture in the developing world,” says Fishman. “The needs and interest from the farmers are endless.”

Experts, companies or students seeking information about the Nitsan Lab’s program can find out more here or here.

The Weizmann Institute’s Tamir Klein predicts a rough road ahead.

“My colleagues and I feel the pressure. Society is looking to us for solving these issues and it won’t be easy,” says Klein. “Buckle up — it will be a bumpy ride.”