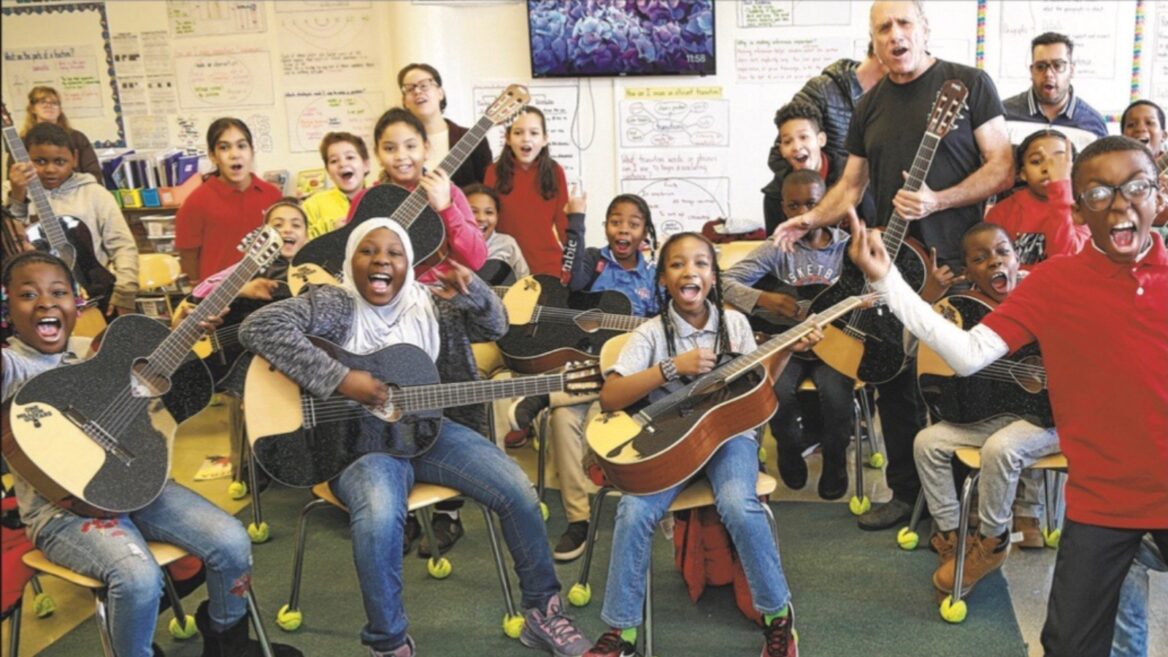 David Broza giving guitars to pupils in a charter school in the Bronx, New York. Photo courtesy of One Million Guitars

On a random street in New York City, Israeli expat and high-tech entrepreneur Edo Segal spotted Israeli guitarist/songwriter/peace activist David Broza and called out to him.

Segal told Broza that he’d watched his 2014 documentary, “East Jerusalem/West Jerusalem.” The film follows Broza’s musical collaborations with Arab Jerusalemites. One scene shows him teaching music to 50 kids in a neighborhood with no afterschool activities.

“You should be giving guitars to these kids,” Segal said to Broza, a complete stranger. “I can help you.”

Over coffee, the two Israelis realized the idea had much wider potential. Segal brought in a lawyer to help set up a nonprofit and suggested they name it One Million Guitars. 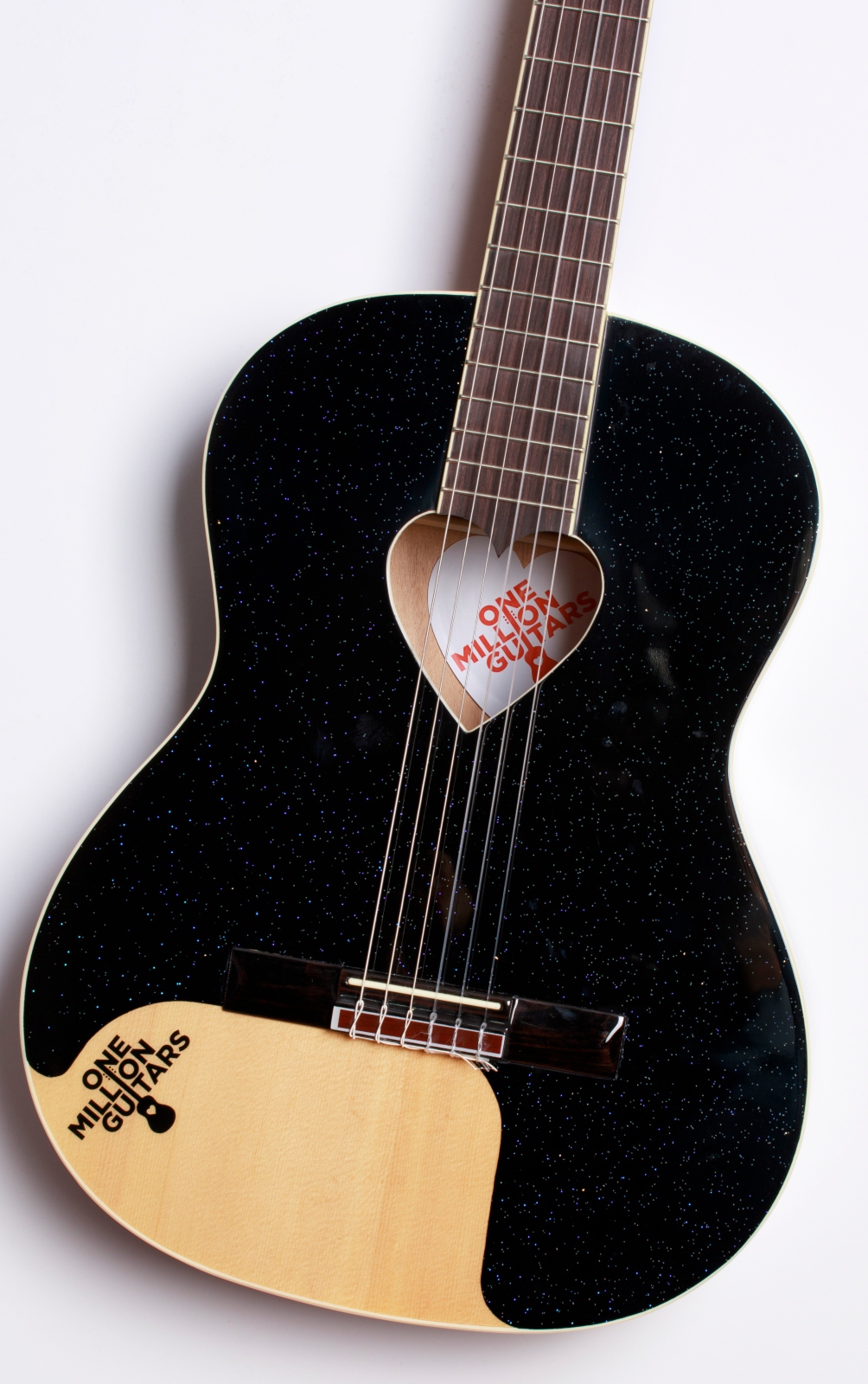 The $100 guitars have a heart-shaped hole in the sound box mimicking the heart in the One Million Guitars logo. They have dark and light colors modeled after Broza’s own stage guitar, and pick guards with sparkling stars.

Over the past two years, Broza’s program has reached tens of thousands of underprivileged fourth and fifth graders in 3,300 schools in 43 states through partner programs such as Little Kids Rock in New York and Guitars in the Classroom in San Diego.

With the backing of partners such as Viacom and Paramount, 2,000 custom-designed guitars have been distributed. Another 500 are being manufactured and Broza hopes donations will allow him to keep up with demand.

“There aren’t enough instruments in public schools, and we provide them to every student in the class who wants to study guitar,” says Broza. He believes that early access to music education can be pivotal in the life of a child with latent talent.

There’s a catch: To keep the guitar forever, the child must complete two years of instruction from the partner organization in school, amounting to 29 classes per year.

One Million Guitars spreads to Israel

Based on his success in the United States, Broza recently launched One Million Guitars in Israel with the support of Canadian philanthropists Gerry Schwartz and Heather Reisman.

Broza is in Israel only about 10 days per month; he lives in New York with his wife, Israeli fashion designer Nili Lotan.

So his friend Nabeel Abboud-Ashkar from Nazareth directs the project through his Polyphony Foundation, which is dedicated to bridging the divide between Arab and Jewish communities in Israel through music. 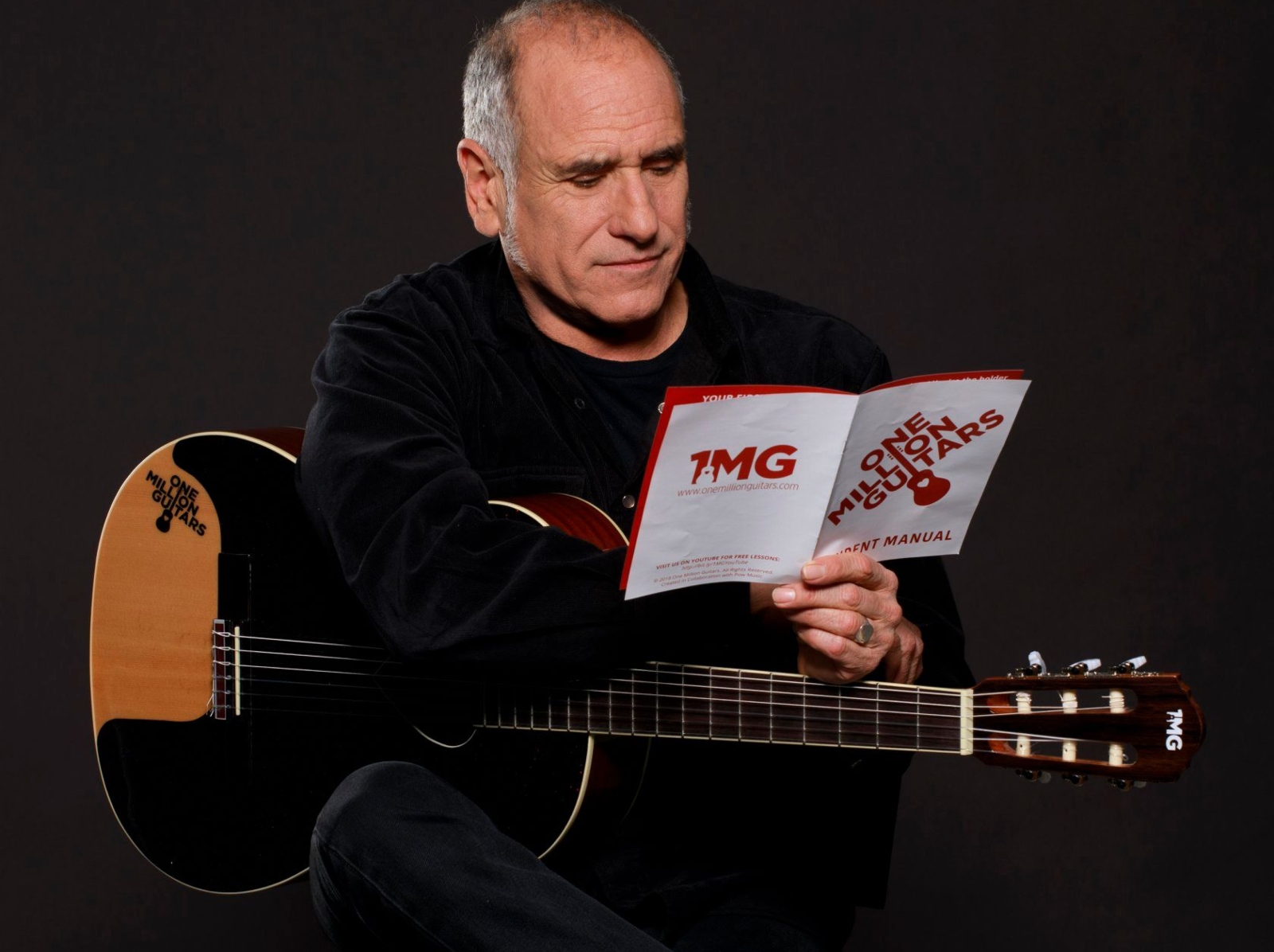 David Broza with a One Million Guitars instrument. Photo by Ilan Besor

One Million Guitars has begun in five Israeli schools spanning from Sderot on the Gaza border down south to a northern Bedouin village.

“We already gave out a couple of hundred guitars and we’ve trained teachers to work with the kids during school hours. It’s beautiful because it’s not an extracurricular activity; it’s part of school and it’s free,” Broza tells ISRAEL21c.

“The headmaster of the Bedouin school sends us long messages of thanks. Instead of beating each other up and joining street gangs, the kids are now sitting in a circle playing guitar,” says Broza.

More school principals in Israel want One Million Guitars to come to their schools. And the word is spreading to other countries.

“A little school in Ethiopia and a refugee camp in Lesbos reached out to me,” says Broza. “If we can get teachers and a safe place to keep the guitars, we can help them.”

No matter where they are, kids participating in One Million Guitars will get a password to a YouTube site that guides them to practice at home. Eventually there could be communication among all the groups.

The back of the guitar features David Broza’s signature and motto. Photo: courtesy

“I’m getting videos from kids from all over,” says Broza. “I feel fortunate to be able to take on this mission.”

Social activism is embedded in his DNA. At the age of seven, he started volunteering at the Israel Sports Center for the Disabled in Ramat Gan, which his father helped found. Broza’s grandfather cofounded the Arab-Israeli village Neve Shalom-Wahat Al-Salam (Oasis of Peace).

One Million Guitars still has quite a way to go in order to live up to its name. Broza and his team are always in search of organizations to help fund the manufacture of the guitars.

Individuals can donate guitars too, either through a monetary gift or by purchasing a guitar at Rudy’s Music in Manhattan or Scarsdale, New York; or at Budagov’s store in Tel Aviv.

“For every guitar you buy at one of these stores, we donate a guitar to a child,” says Broza.