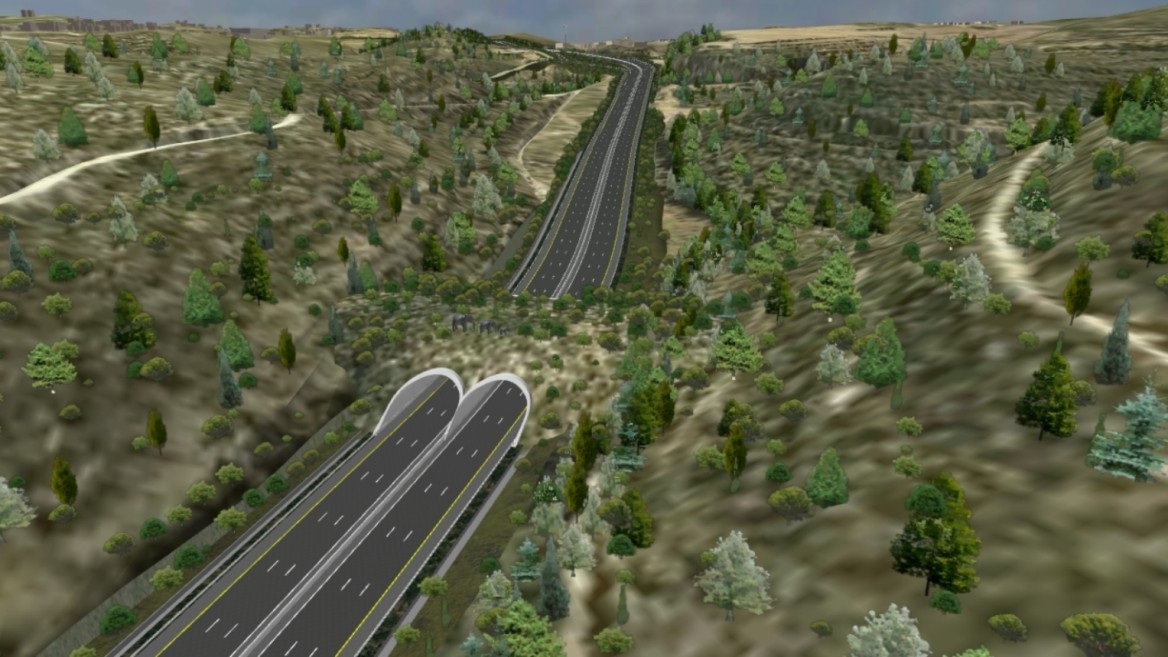 This artist’s rendering of the future Highway 1 with its eco-bridge for animals playfully depicts elephants, though the animals living in the area really include deer, gazelles, wild boars, foxes, jackals, hyenas, porcupines and reptiles. Image courtesy of Netivei Israel

Israel’s $800 million widening and straightening of Highway 1 between Jerusalem and Tel Aviv is intended to make travel safer and more convenient — not only for people but also for animals.

Although the abundant wildlife living in the hills west of Jerusalem will not be driving on the highway, animals need to access food and habitats on both sides of the road. And so a 70-meter-wide concrete “eco-bridge” has been built over a six-kilometer section of new roadway between Sha’ar Hagai and the Shoresh Junction.

“The overpass is necessary because the route of the paved road in the Jerusalem hills goes through areas that constitute habitats for hundreds of species of plants and wildlife,” says David Landesman, head of Highway 1 project for Netivei Israel National Transport Infrastructure Company.

“There are dozens of types of animals in the area, including deer, gazelles, wild boars, foxes, jackals, hyenas, porcupines and many reptiles,” Landesman tells ISRAEL21c.

“Establishing this ecological bridge is designed to allow safe passage of all animals in the vicinity and it will make Route 1 into one of the greenest paved roads in the country in the coming years.” 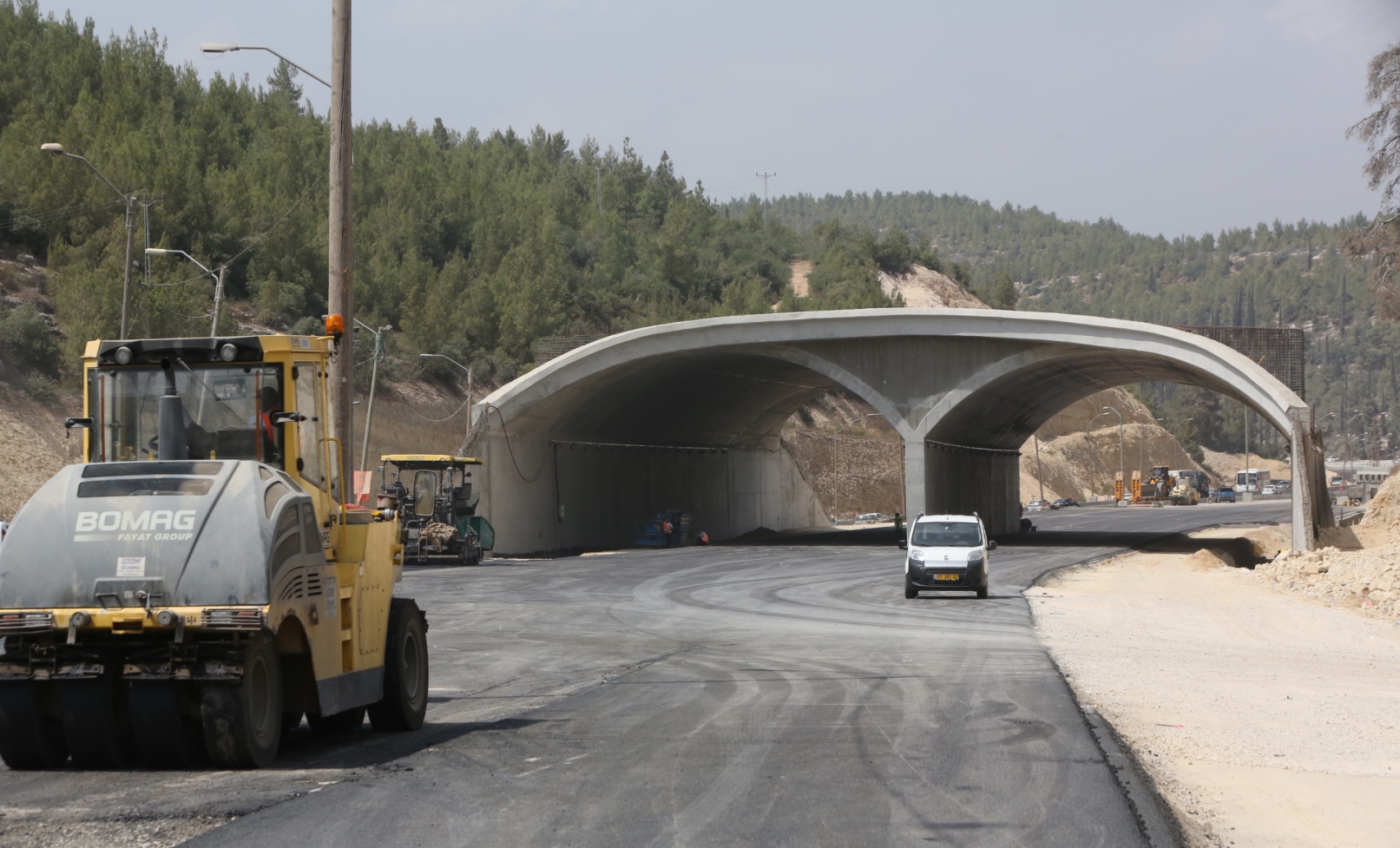 The body of the eco-bridge as seen in early 2016. Photo courtesy of Netivei Israel

Landesman says the design plan for the animal overpass was created with the assistance of landscape, environment and architecture consultants, and with the Israel Nature and Parks Authority, with particular emphasis on scenic and ecological aspects.

Luckily, the eco-bridge builders were able to take advantage of 200,000 cubic meters of dirt and sand excavated as part of Israel Railway’s ongoing construction of train tunnels connecting Jerusalem and Tel Aviv. Landesman says the dirt was brought to the site nearby in 5,000 trailer loads.

The overall construction project also includes landscape plans to preserve and restore hundreds of acres of vegetation on either side of the roadway, including the replanting of 30,000 flower bulbs in the Jewish National Fund’s Rabin Park near Sha’ar Hagai.

Landesman says this is not the first ecological bridge in Israel. “Animals that attempt to cross busy roads are hurt and run over by cars and sometimes cause accidents,” he says. “Netivei Israel works in collaboration with experts on ecology in order to provide safe passage for animals.” 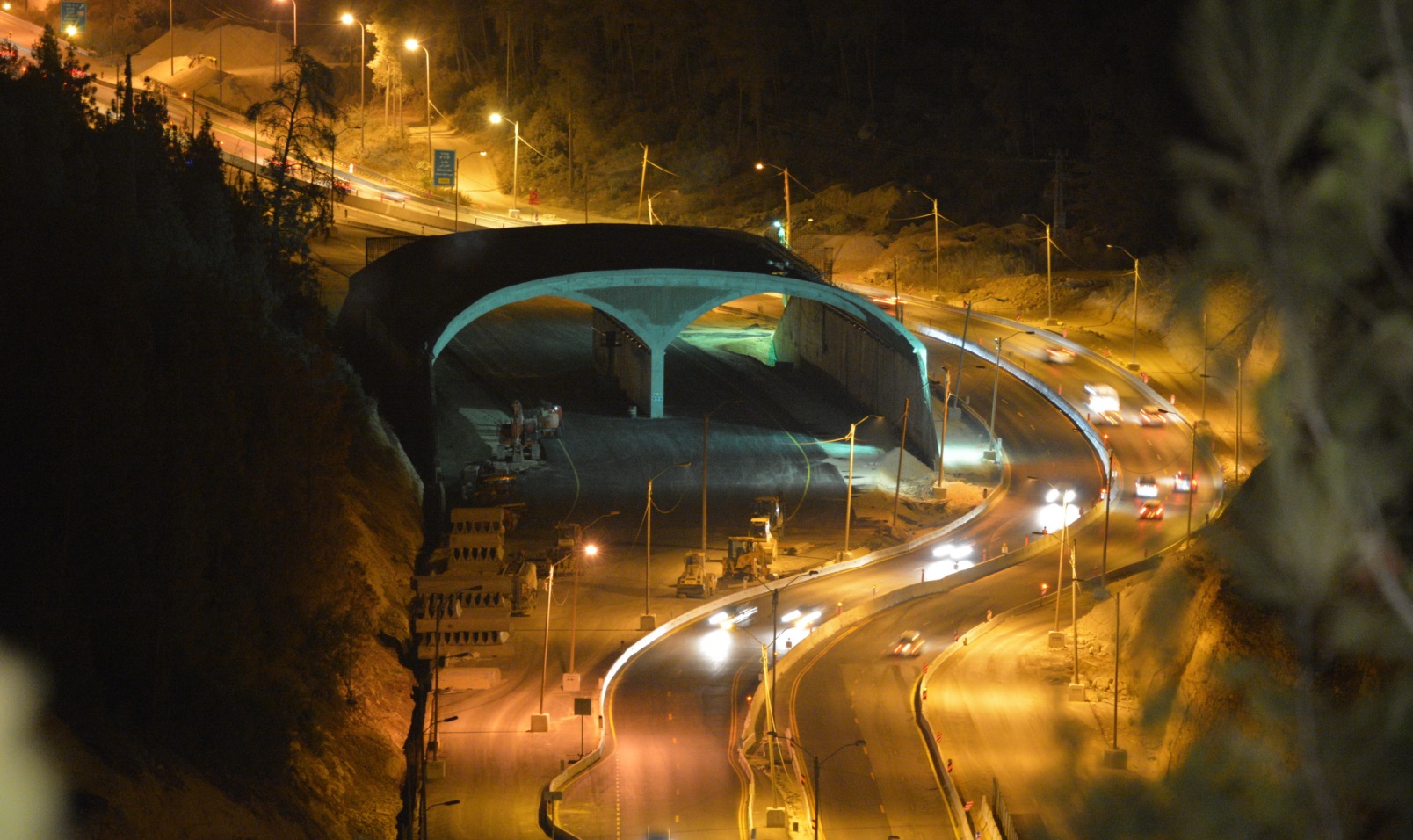 A view of the Highway 1 eco-bridge at night. When the new road is completed, the winding lanes seen to the right will be rerouted under the bridge. Photo courtesy of Netivei Israel

The new wider road is expected to bring additional green benefits to the people and animals of the region by reducing fuel consumption and air pollution. It will be embedded with sophisticated electronic systems for traffic management and control, utilizing cameras, sensors and detectors.

The new Highway 1 is considered one of the most critical transportation projects to be undertaken over the upcoming years by the Ministry of Transport, Infrastructure and Road Safety and Netivei Israel.