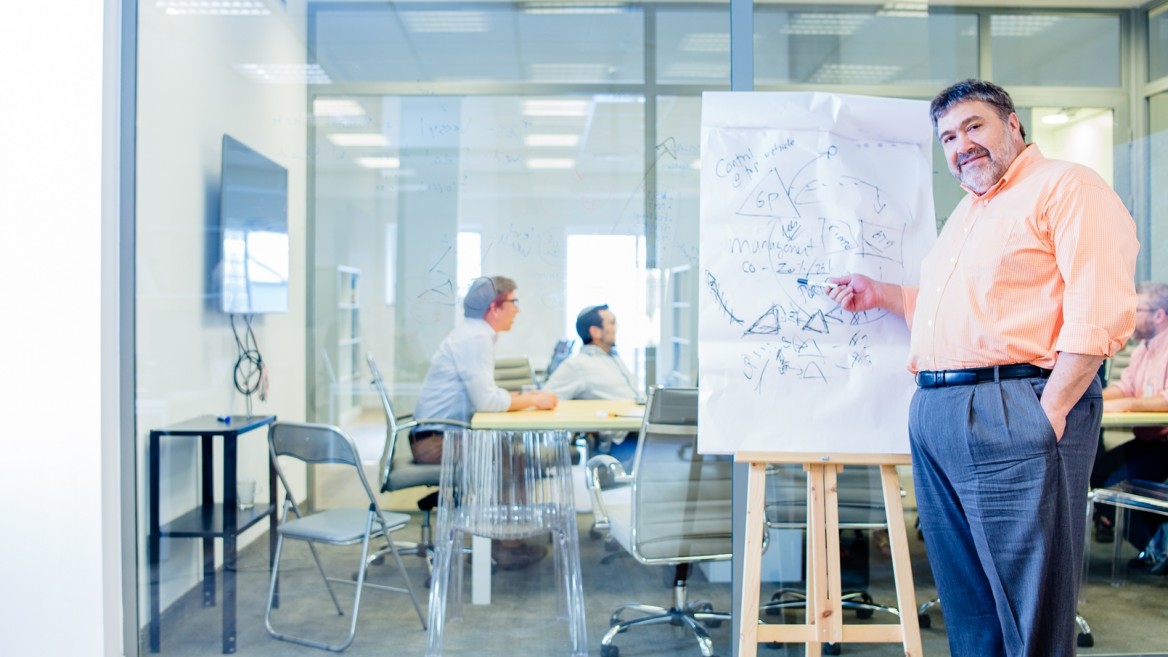 Jon Medved at OurCrowd in Jerusalem. Photo by Michael Alvarez-Pereyre

The California-bred Jerusalem resident has invested in more than 100 Israeli startups, helping 12 of them to get to valuations in excess of $100 million. In October 2012, he and cofounder Steve Blumgart launched OurCrowd, the world’s first equity-based crowdfunding startup investment platform.

OurCrowd has effectively disrupted and democratized the venture-capital space, offering accredited investors the chance to put as little as $10,000 into a promising “startup nation” company. Approximately 10,000 OurCrowd investors have funded nearly 80 portfolio startups thus far, including headline-grabbers such as ReWalk Robotics,  ElMindA, Consumer Physics and BriefCam.

At the end of September, a third OurCrowd startup announced a lucrative exit: BillGuard (which we first covered in 2011) was acquired by San Francisco-based Prosper Marketplace for a reported $30 million.

ISRAEL21c spoke with Medved shortly after his 60th birthday – which coincided with the Jewish New Year – to get his insights into the Israeli high-tech landscape and into Jon Medved himself.

First, a short bio: Medved grew up in the Los Angeles area and graduated from the University of California at Berkeley. His three brothers are radio-show host, political commentator and film critic Michael; entertainment public-relations guru Harry; and Ben, a psychologist. 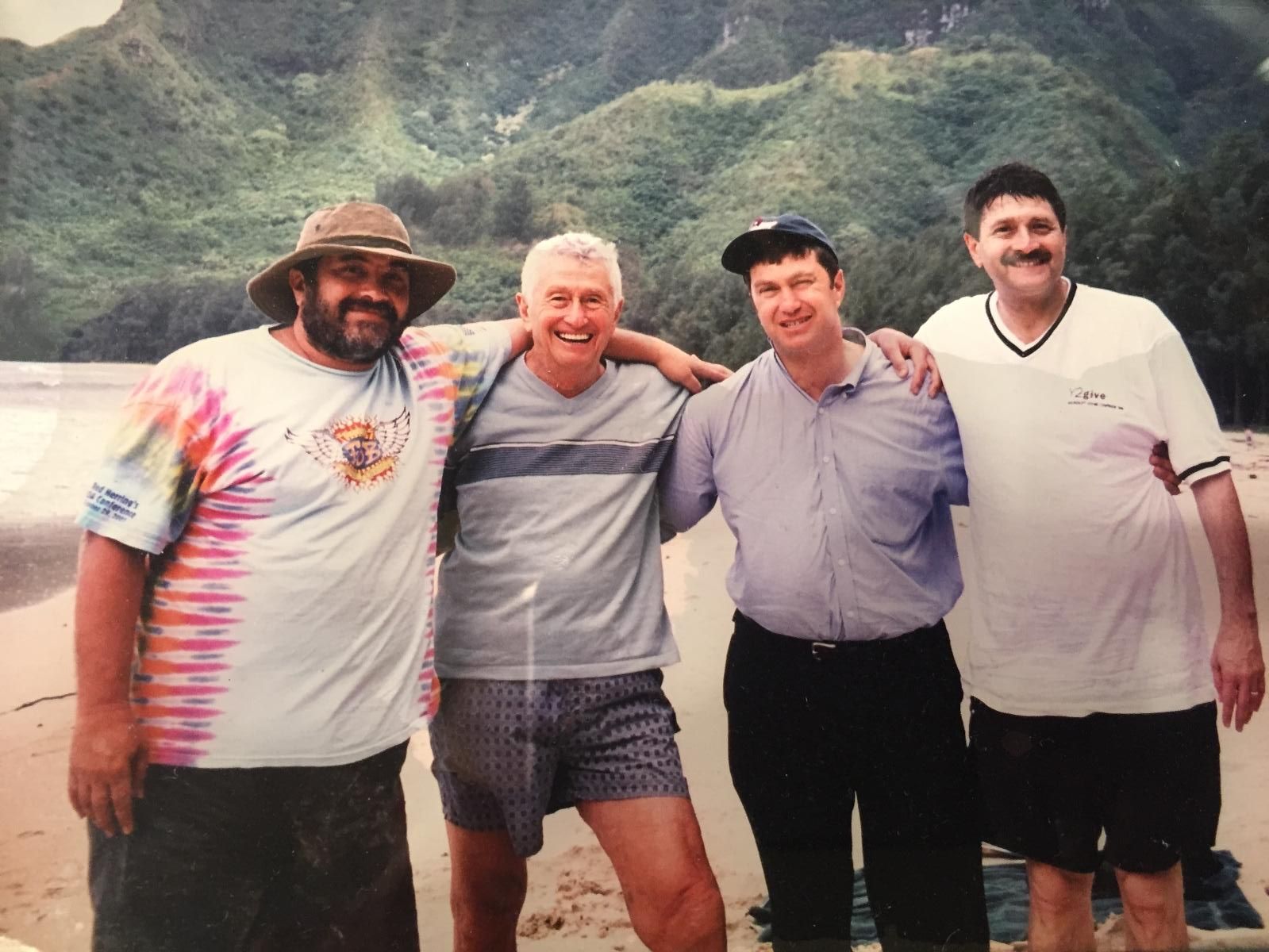 A young Jonathan Medved, left, with his father,David, and brothers Harry and Michael. David Medved lived in Israel from 1990 until his passing in 2009. Photo: courtesy

Jon Medved moved to Israel in 1980. He and his father, a physicist and early startup entrepreneur, established Meret Optical Communications in 1982; it was acquired by Amoco (now British Petroleum) in 1990. His other successful businesses prior to OurCrowd included Accent Software, Israel SeedPartners and Vringo.

Medved and his wife, Jane, have three sons and a daughter. Active on the boards of several Israeli non-profits, the Jerusalem College of Technology and Ma’aleh Film School, he collects rare single-malt whiskey and Hawaiian shirts.

ISRAEL21c: You first visited Israel in 1973. What was it that made you want to live here the rest of your life?

Jon Medved: I was a wide-eyed college student, a remarkable period of life where you’re exploring things. Israel was an unbelievable place that spoke to me both in terms of the sense of building a new country and a sense of connecting with who I was. It was adventurous, classy, exotic, romantic, messy, frustrating — all of this combined, but I let the negatives take their rightful place and focused on the positive. I visited seven more times before moving at the end of 1980; I did my due diligence, so it wasn’t like a lightning strike. I had studied history in college, and I got into high-tech by getting involved with my father’s fiber-optics communication company here in Israel.

I21c: What was it like to work with your father?

JM: He was the kind of guy who never gave up having fun. When we were little, he’d find time to shoot basketball or go camping with us. We weren’t wealthy but there was a sense you could work and focus on ideas and have fun at the same time. He’d often allow me to hang out in his office at home at 2 in the morning and he’d play classical music and do his work and I’d do my homework. In our startup in Santa Monica, a few afternoons every week he’d run in and ask if I had my swimming trunks and we’d go to the beach. It didn’t matter if we were in the midst of a crisis.

I21c: What’s your assessment of the Israeli ecosystem 25 years into the “startup nation” phenomenon?

JM: I’m not sure I would have foreseen that we’d be this successful in the tech business. We’re now the second most important source of innovation for the world. This year it looks like almost $5 billion will be invested in venture-backed startups in this country. Nobody would have dreamed there would be 350 multinationals operating here today, even Apple and Amazon and Korean and Chinese companies.

I21c: What’s next? Will Israel build more companies to scale or continue serving as an R&D base?

JM: When Nokia went down it brought all of Finland down with it, so thank God we didn’t go in that direction. We’re much better off with our fairly balanced ecosystem between big companies like Check Point and Teva and Amdocs and Nice, and a robust variety of startups. I think there is no reason it shouldn’t continue to grow, especially as a large Asian component is part of the mix. There’s a good blend between angels, VCs, corporate venture money and private equity money. The growth of crowdfunding is also a contributing factor. I’ve always been an optimist but I think there’s reason for continued optimism.

I21c: Is Israel prepared to fulfill coming demands in high-tech?

JM: If you look at where technology markets are going for the next 10 or 20 years, these are the areas where Israel is stronger than ever, such as drones — nobody does drones better than Israel — robotics, machine vision, medical devices, cybersecurity, big-data analytics. I think the next decades will be even better.

I21c: What are the biggest challenges facing Israel’s high-tech growth?

JM: People talk about the boycott, about the brain drain, about the rise of India and China, but we can handle these challenges as long as people here are awake enough and dreaming. We won’t have enough leaders and foot soldiers if we don’t mine the talents of the haredi, Arab and female sectors of the workforce, but I see room for optimism there too.

There are hundreds of interesting companies in Israel. The most exciting part is the cadre of thousands of serial entrepreneurs who show no signs of slowing down.

Israel knows how to start companies, fund them and grow them, and we have so many people sitting around thinking about the next big thing and then taking the risks to make it happen. This is uniquely Israeli. In most parts of the world people don’t just hang around talking business plans.

I21c: What are the biggest challenges in wooing OurCrowd investors?

JM: We often hear the joke about how to make a small fortune in Israel: bring a big one and wait awhile. People think Israelis are too hard to work with. But I think Israelis have changed. Those in high-tech are more westernized and understand “win-win” better than before. The job of the intermediary — whether our platform or other vehicles leading investors to invest here — is to select the good players. It’s so small here that you can identify the bad players pretty quickly.

We want to get people connected and focused on crowd-building, to add value to the companies they invest in by making introductions to new customers or strategic partners; helping them get into the local press; mobilizing the business-oriented social network on their behalf. And that’s fun.

I21c: OurCrowd made it to KPMG’s top 50 fin-tech innovator list and Fast Company’s 2015 top 10 most innovative companies list. How can you sustain this success?

JM: OurCrowd is great mix of startups, investing and helping Israel. When we came up with this idea, there were so many problems because nobody had done this before. Would investors go for it? Would VCs play nicely with us? And the answer is yes.

We hoped to double the investment amount each year, and we’ve managed to do that. It’s challenging in that we have to continue reinventing ourselves all the time. We have to build the tools and platform that allow us to really mobilize this crowd and to choose good companies and staff. [In March] we hired a very interesting chief product officer, Shai Ben-Tovim, previously with Wonga in the UK.

I’m very happy about what’s happened to date, and pleasantly surprised, but we can’t rest on our laurels in a world that is moving very fast. We’re the leading global crowdfunding platform in the world now. We climbed the mountain and see Everest ahead, so we need to chart that next assault over the next two or three years. Ultimately, we want to invest a billion dollars a year in the platform and get to 100,000 investors.

I21c: How would you describe yourself?

JM: I’m curious, I dream, I love to eat, I like leading a team, I’m a devoted family guy and I simply love having fun. Being able to build new things that can help people and provide jobs is such a blessing. I feel very lucky, and I can’t believe I just turned 60 because I feel young and energetic, doing what I really love doing.