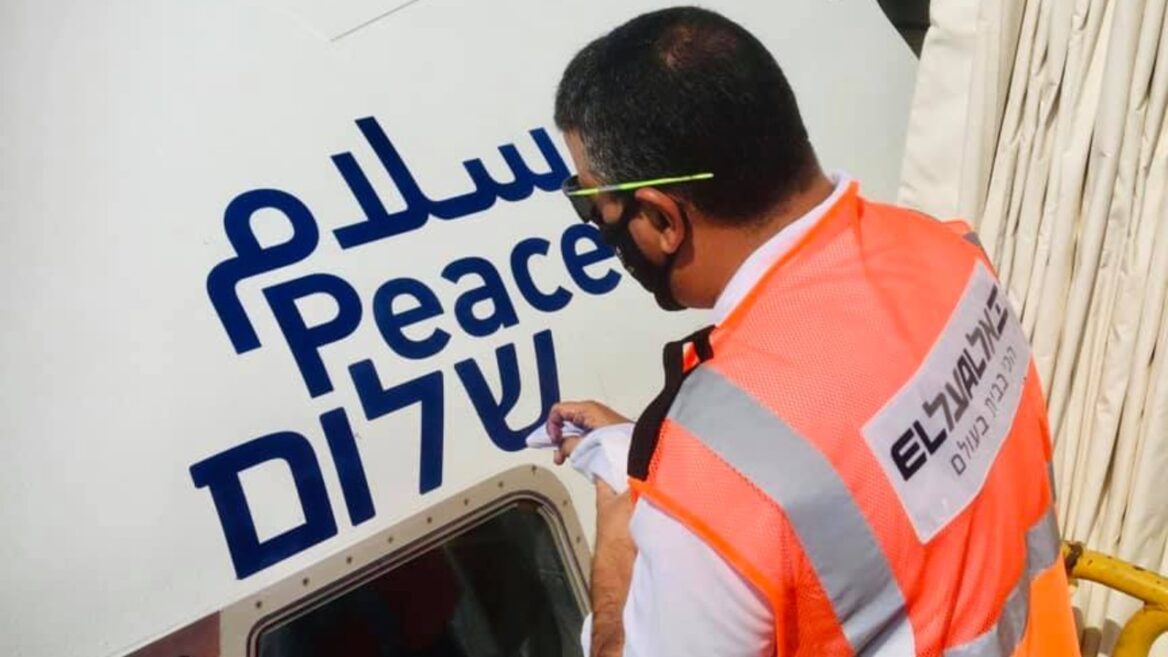 El Al 555 was the number of the December 22 historic direct flight from Israel to Morocco.

The number wasn’t chosen randomly – 555 is a subtle reference to “hamsa hamsa hamsa,” an expression similar to “knock on wood” that’s common to Arab and Jewish cultures, symbolized by the popular five-fingered hamsa amulet.

And although that plane wasn’t permitted to fly over Tunisia and Algeria — they do not (yet) have diplomatic relations with Israel — it was a warm handshake reaching across 2,400 miles between the two states. 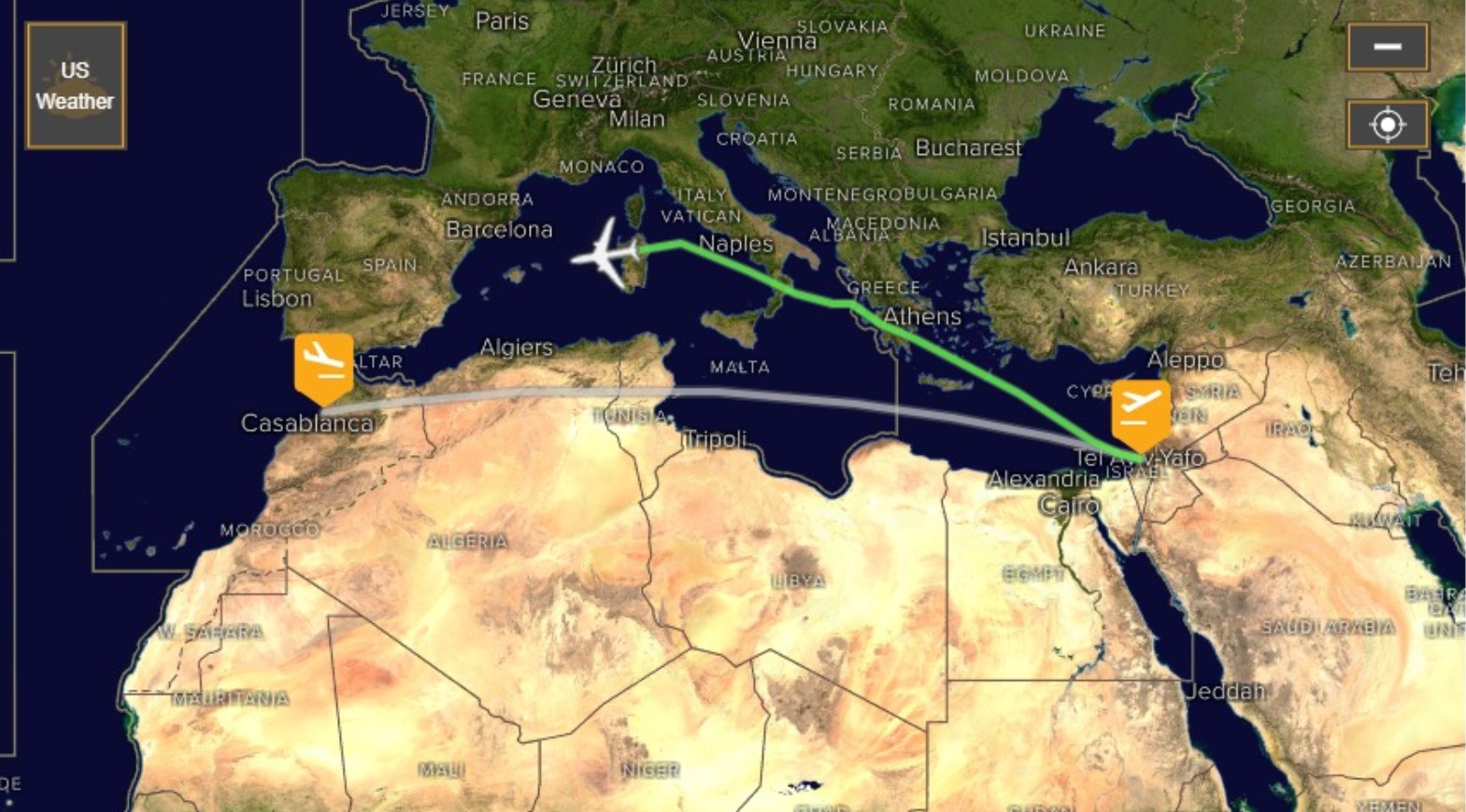 “The hamsa has meaning for both sides,” said Einat Levi, a researcher specializing in Israeli-Moroccan relations at the think tank Mitvim – The Israeli Institute for Regional Foreign Policies, speaking to the press on the impact of the normalization deal announced December 10.

Since the ice was first broken on August 13 with the Abraham Accords between Israel and the United Arab Emirates, Israel has forged ties with Bahrain, Sudan, Morocco and Bhutan.

Levi predicts Oman and Mauritania could be next in line.

What fruits will blossom from these relationships in 2021? We asked Israeli experts for their insights. 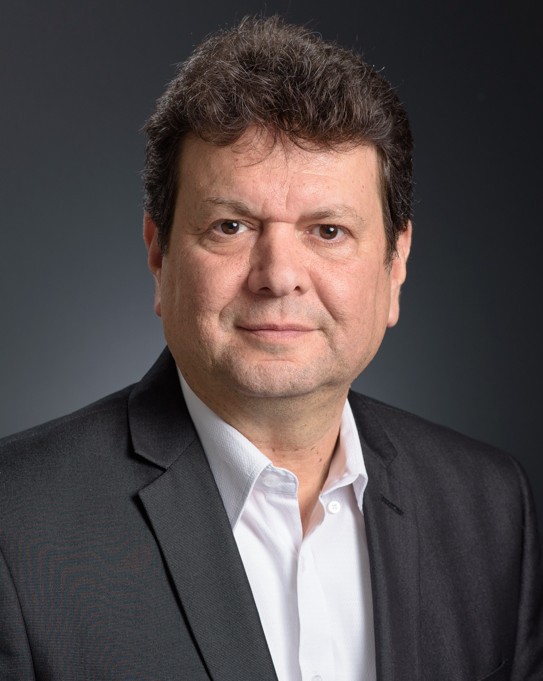 “We view the opportunity as a quantum leap in developing economic relations between Israel and the GCC [Gulf Cooperation Council], which includes UAE, Bahrain and the rest that may follow. Our working assumption is that the economic diplomacy train has left the station,” says Adiv Baruch, chairman of the Israel Export and International Cooperation Institute.

“Although within those regions, and even Morocco, there was always some bilateral trade, it was always done through third parties and subcontractors,” Baruch tells ISRAEL21c.

“The fact that now we can have direct interaction with the private sector and the government to better understand their vision and mission enables us to move to the next level – not just knowledge transfer but co-creation.”

Baruch explains that the new generation of leaders of the UAE and Bahrain, educated in top universities of Europe and the United States, are thinking strategically about how their countries can bring value to the global market in the post-petroleum era.

The UAE’s strategy focuses more on commerce and trade, while Bahrain is becoming an international financial center.

“With each country, we have a different growth engine to develop mutual interests — not just bilateral trade but innovation and manufacturing for the whole region.”

Mutual trade to top $1b

Baruch estimates that bilateral trade between Israel and the UAE will exceed a billion dollars, and with Bahrain a few hundred million.

Over half of Israel’s overall exports – which totaled $116 billion in 2019 — are technology-related.

“In every single sector that is prioritized by them, Israel has one of the leading innovation hubs in the world,” says Baruch.

So, for instance, Israel will export both agricultural products – by truck through Jordan — to Bahrain and share agricultural technologies enabling Bahraini farmers to grow produce there in hot desert conditions.

Israeli ag-tech and food-tech solutions also will be in demand in Morocco and Bhutan, Baruch says.

“It’s not just Israeli companies selling them products but fitting into their economic stability and growth strategy,” Baruch says. “Israel has a very interesting role in both developed and developing countries and we are very keen on playing it.”

The Israel Export and International Cooperation Institute led a mission to the UAE and offers webinars and online courses to help business people in each country understand cultural dos and don’ts.

“We have to go through a process of building trust,” says Baruch. “We cannot go from zero to 100 in a few seconds.”

Israelis already were flocking to Dubai by the tens of thousands until the spike in Covid-19 cases halted air travel temporarily.

Meanwhile, the groundwork is being laid for plentiful tourism in both directions, says Ksenia Kobiakov, the Israeli Tourism Ministry’s director of new markets development. 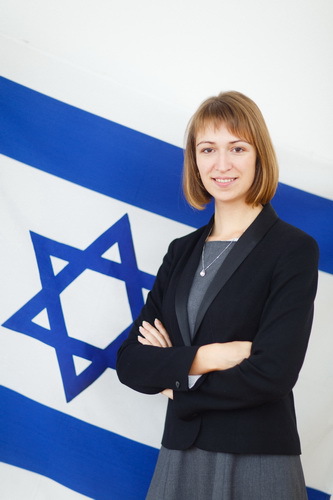 Ksenia Kobiakov, director of new markets development in the Ministry of Tourism. Photo by Ilya Dolgopolsky

“Covid times will pass and until then we have a lot of work to do,” says Kobiakov, who presented at the ministry’s inaugural Digital Tourism Forum in the UAE on December 16.

“We will soon sign an MoU between our ministries of tourism about cooperation in a long list of aspects from mutual marketing packages to conferences, and I’m sure hotels will create many collaborations as well.”

The Tourism Ministry is creating itineraries for different types of groups coming from the UAE, as well as a dedicated website in English and Arabic.

“We have impressive working plans to promote Israel online and offline. We are thinking big,” Kobiakov says.

“We already started to work on a branding campaign to raise awareness about Israel. We’re getting requests for webinars from UAE travel agencies and tour operators. They need to know our market in order to sell it. When we know when the borders will open, we’ll launch a marketing campaign.”

The Tourism Ministry is intensively researching differences between the Gulf and Moroccan markets, says Kobiakov.

While these countries are all predominantly Muslim, the UAE and Bahrain populations have extremely diverse populations of expats from nations such as India, Australia and Philippines – markets Israel is familiar with.

“We created a document of dos and don’ts for anyone in the tourism field who will work with this market,” says Kobiakov.

Israeli hotels must be prepared to accommodate the physical and religious requirements of large family groups traveling from the UAE and Bahrain, which are often multigenerational and include hired help.

“They want to be on one floor, and they need halal food and separate times for men and women in the swimming pool. On the other hand, our country is most suitable for them because we have plenty of halal food, Arab-language signage and tourist literature, and important Muslim sites.”

A delegation from Bahrain recently came to discuss mutual tourism and common packages that will enable tourists from abroad to book a vacation in Israel and Bahrain during the same trip.

“We expect to do that with Morocco and the UAE as well,” says Kobiakov. “People from all over the world will understand the region is safe with all these agreements in place. They will want to combine more countries in one trip.”

While many visitors to Israel book side trips to Jordan and Egypt, with which Israel has had “cold” diplomatic relations for years, the momentum fueled by the Abraham Accords presents new opportunities for cooperative tourism packages that will simplify such arrangements.

Tourism was on the agenda when Israeli officials aboard El Al Flight 555 met with Moroccan counterparts on December 22. 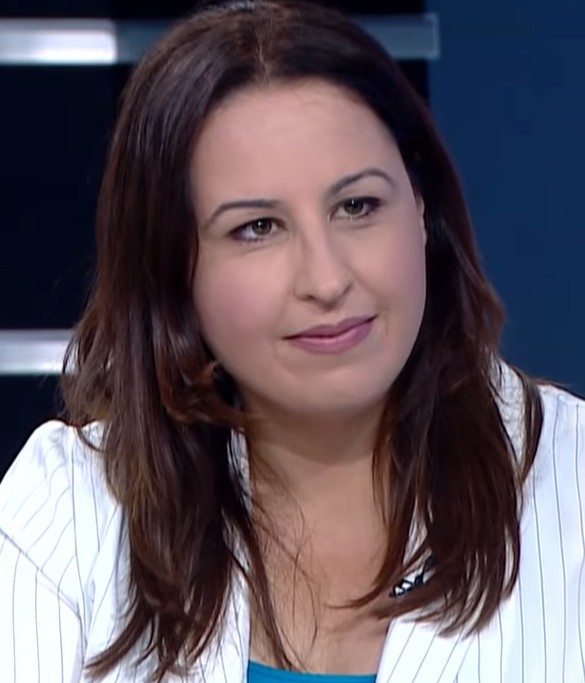 Einat Levi from Mitvim notes that the large number of Moroccan Jews living in Israel – estimated at between 750,000 and 1 million — has assured a steady stream of Israeli visitors to Morocco since the 1980s.

“In the opposite direction, in 2019, 3,000 Moroccan tourists visited Israel. That is not much — the main obstacle was visas. When that problem is eased, the number should rise dramatically.”

There’s been an astronomical amount of business- and technology-related activity between the UAE and Israel since August.

Several groups and mutual events are working to encourage and ease the way for this flurry of deals-in-the-making.

Connecting UAE-Israel, a hub established by UAE-based Cosmopole PR agency and Tel Aviv-based consultancy Kamir Strategy, is creating networks and introductions between companies and personalities. One of its events was an online dialogue among successful Israeli and Emirati businesswomen. 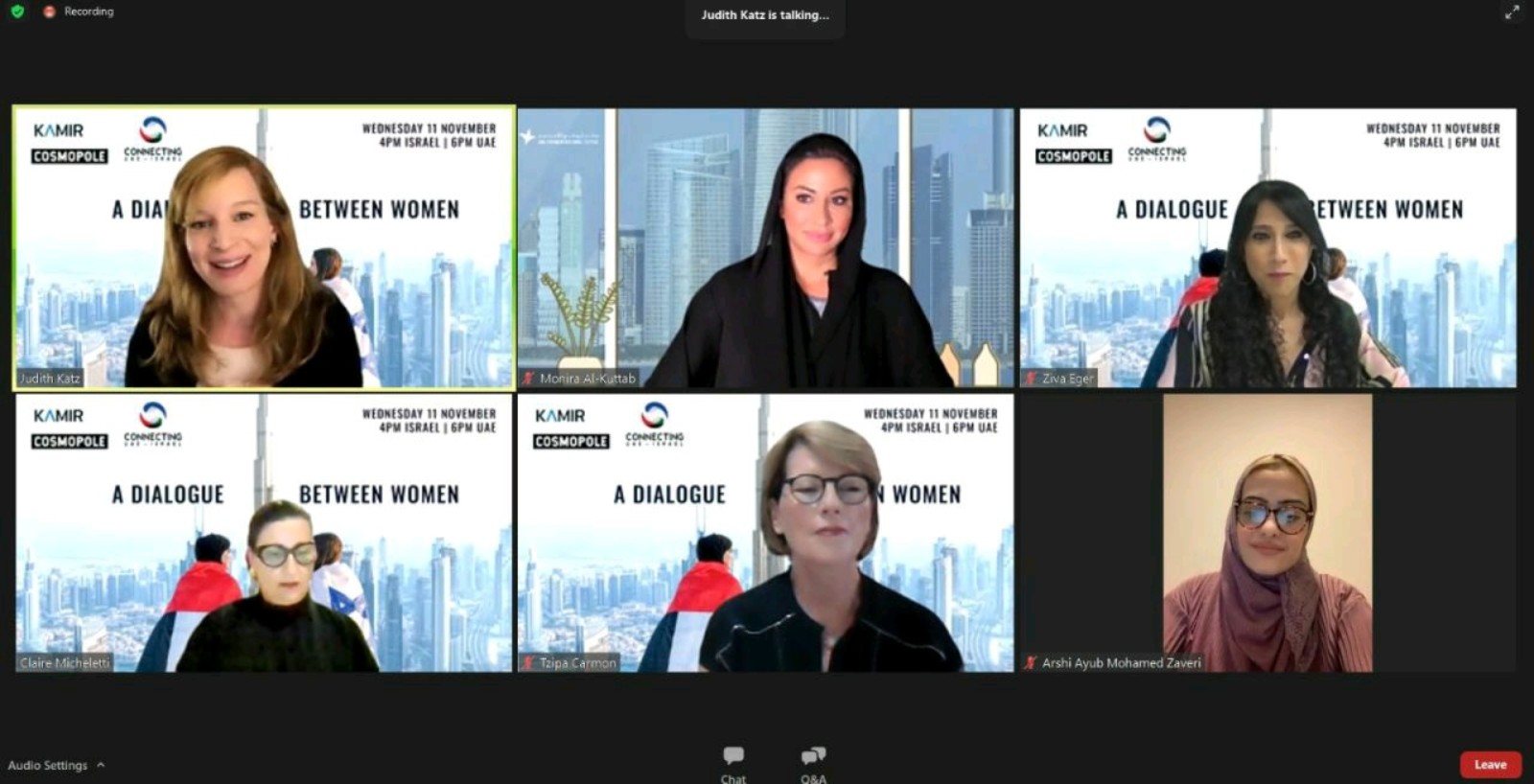 Israeli and Emirati female business leaders getting to know one another. Screenshot courtesy of Kamir Strategy 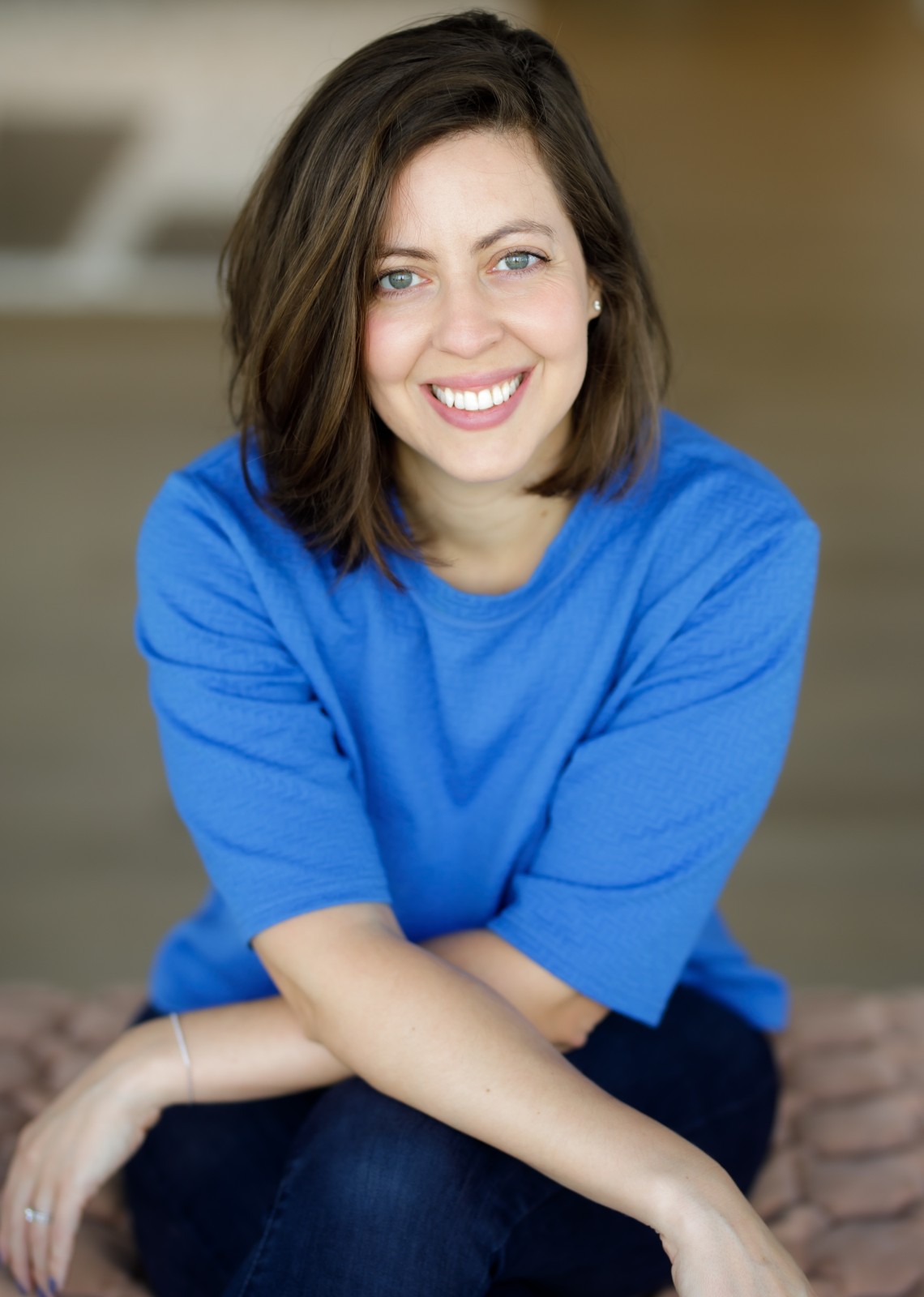 Noa Gastfreund, managing director of The Hybrid and cofounder of the UAE-Israel Tech Zone. Photo by Omer Hacohen

“We are building a hub that aims to become the official address for business queries in an effort to create a stronger region through technology,” says cofounder Noa Gastfreund, who is managing director of The Hybrid.

“It’s about exploration, learning, getting to know the other side and understanding the business culture and the differences between the two countries,” she tells ISRAEL21c.

“We see now there are differences we need to bridge, and it will take time. Israelis are very proactive about reaching out and trying to raise money and do business. Emiratis do business based on relationships and trust, which take time to build,” she relates.

“Having said that, there are many opportunities for both sides related to technology and they can learn from each other, for example how the UAE is managing the corona situation so well. We can bring the know-how and experience of our high-tech ecosystem to advance the UAE’s long-term vision to apply technologies to build their country and economy.”

In the first quarter of 2021, the UAE-IL Tech Zone plans a conference in the Emirates. “We have some collaborations planned between accelerators and hubs on both sides,” says Gastfreund.