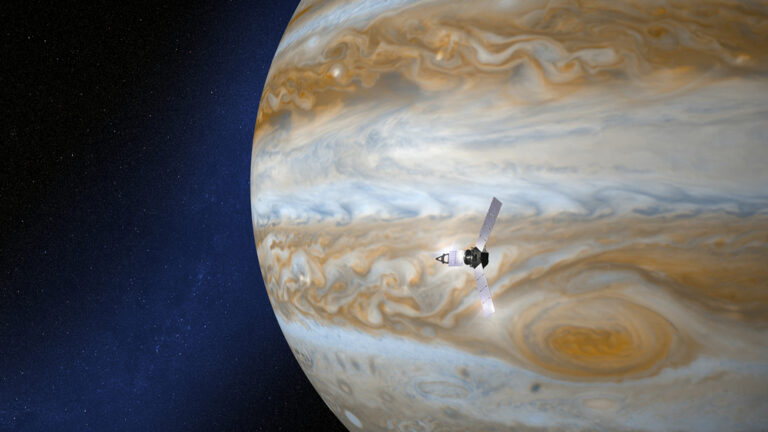 The Juno space probe near Jupiter. Photo by www.shutterstock.com

An atomic clock — designed and constructed in Israel — will be carried beyond the Earth’s orbit as part of a mission planned by the European Space Agency (ESA).

The ESA mission, known as JUICE – JUpiter ICy moons Explorer — will spend at least three years making detailed observations of the solar system’s largest planet and three of its largest moons. Jupiter is known to have 67 moons.

The atomic clock was developed by Israeli firm AccuBeat,  a leading designer and manufacturer of exceedingly accurate frequency and timing solutions and products for aerospace, defense, telecommunications and research, together with Israel’s lead investigator, Yohai Kaspi of the Weizmann Institute of Science, and in collaboration with the University of Rome.

The joint project — known as 3GM (Gravity & Geophysics of Jupiter and Galilean Moons) – will study the planet’s atmosphere by intercepting radio waves traveling through the gas, timing them and measuring the angle at which the waves are deflected. This will enable them to decipher the atmosphere’s makeup.

Could there be life on Jupiter?

The Israeli atomic clock-based device, recently approved for flight by the ESA, will measure tiny vacillations in a radio beam provided by the Italian team. Israel’s Ministry of Science and Technology will fund the research, building and assembly of the device.

“This is the first time that an Israeli-built device will be carried beyond the Earth’s orbit,” says Kaspi of the Weizmann Institute’s Earth and Planetary Sciences Department.

During flybys of three of the planet’s moons – Europa, Ganymede and Callisto – the 3GM instruments will help search for tides.

Researchers observing these moons have noted fluctuations in gravity, suggesting the large mass of Jupiter is creating tides in liquid oceans beneath their hard, icy exteriors. By measuring the variations in gravity, the researchers hope to learn how large these oceans are, what they are made of, and even whether they might harbor life.

The European space mission JUICE is scheduled to launch in 2022 and reach Jupiter by 2030. In the long wait – eight years – from launch to arrival, Kaspi intends to work on building theoretical models that can be tested against the data they will receive from their instruments.