Click on the video to watch them create this masterpiece. The recipe is below if you want to try it yourself.

Cake:
Savarin or round Bundt or giant doughnut tin
1 cup / 250g melted butter or 225ml oil
1 cup / 250g sugar
4 eggs
1 cup / 250g plain flour
10g baking powder
2 1/4 tsp / 10g baking powder
1/2 tsp vanilla
Line tin with oil and dust some flour over the surface to make it completely non-stick.
In a bowl, combine butter/oil and sugar and mix well.
Add in the eggs and vanilla and mix.
Fold in the flour and baking powder until the batter is smooth.
Fill the tin and bake in a preheated 338F/170°C oven for about 45 minutes until baked through.
Repeat so you have 2 half doughnut shaped cakes

Buttercream:
5 egg whites
300g sugar
1 1/2 cups / 300g sugar
1 1/2 cups / 300g soft butter
1/2 tsp vanilla
In a stand mixer bowl, heat up the egg whites and sugar over a bain-marie (double boiler) until the sugar is dissolves and the mix reached 145 / 63°C.
Whisk on high speed until a thick meringue has formed. Cool completely.
Put the whisk on a medium speed and slowly add in the butter, small chunks at a time.
Keep the speed on medium until it looks as though it’s about to split.
Keep mixing it and eventually the buttercream forms.
Turn the speed up high to make sure all the meringue is fully mixed in with the butter.
Mix in vanilla. 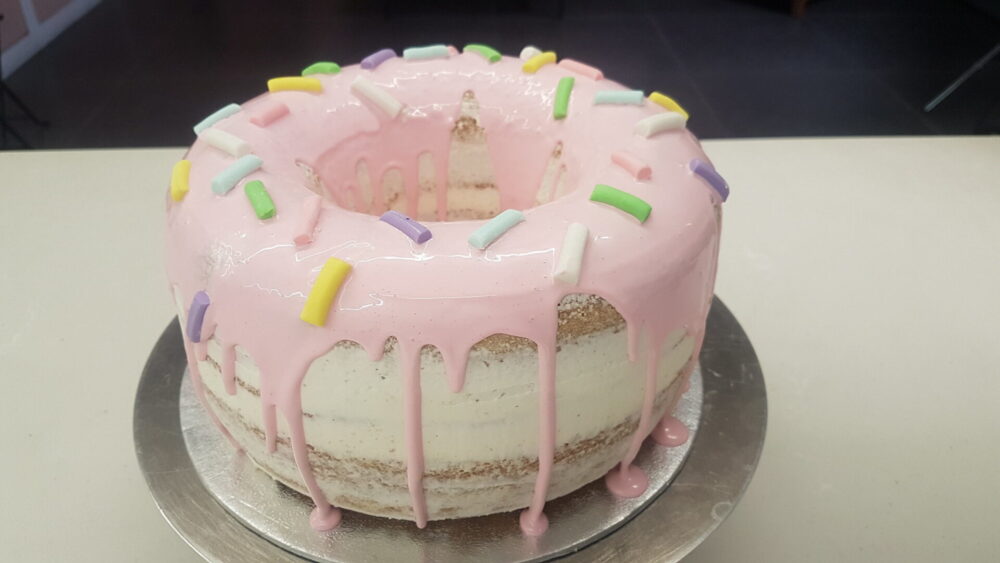 Celebrate the holidays with this beautiful donut cake. Photo still from film
UNCOVER ISRAEL - Get the ISRAEL21c
Weekly Edition free by email
Sign Up Now!
Give
Every
Month
Help ISRAEL21c uncover
the Israel we love