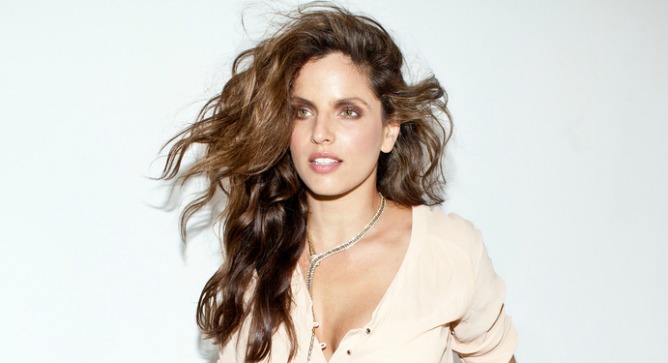 There are more mobile phone apps that let you record and upload video than you can shake a cathode ray tube at. So what’s a tiny Israeli startup in this crowded space supposed to do to stand out? Landing a sexy supermodel and actress as a co-founder would be a good place to begin.

Noa Tishby, perhaps best known for selling hit Israeli TV series such as In Treatment and Homeland to Hollywood, has joined Minit, a three-person startup based in Tel Aviv making what Tishby describes as “voicemail for video.”

Tishby gets propositioned all the time – and here we mean by the tech set. “But when I saw Minit, I found it very intriguing, on the nexus between technology and entertainment,” she tells ISRAEL21c. “It’s an app, but what comes out of it are human stories, characters, personalities, communities.”

These human stories start when Minit users shoot a 60-second (or less) video of themselves on their smartphones – usually it’s just the person speaking into the camera with no fancy cross-cuts and dissolves – and post it to the Minit site.

The post can be either public for others to watch and interact with, or just for selected friends or family to access. Updating Facebook and Twitter is built in. If you enjoy someone’s video minute, you can post a video response. No text comments are allowed.

That ban on text is key to differentiating Minit from YouTube, where text comments can get nasty fast. By contrast, “when you have to comment on video, you tend to be nicer,” Tishby explains. “You can’t be anonymous hiding behind a keyboard. You’ve got to put your face up there.”

While putting your minute-long videos out there publicly may be a fast track to fame (Tishby, not surprisingly, has the most videos and followers so far on Minit), the private side is in many ways more intriguing. It’s also where Minit hopes to make some money.

For a fee (the public Minit is free), you can set up your own “room” and invite the people you want to join — family members or business associates, perhaps. A Minit room could be used by corporations to provide a space for product teams to discuss new software features, or a company can create an easily updated video feed before, during and after a corporate retreat.

Minit is close in concept to Socialcam, another mobile app that allows users to post quick videos of themselves and that is far more polished and popular. And also more complex, Tishby says. Minit strips away the bells and whistles to focus on the one-on-one conversations.

Whether that will be enough to stand out still remains to be seen. The company is still very early stage and entirely bootstrapped by its founders. The product is pretty barebones and crashed several times when we tried it. (Tishby urged us to try again – “It must have been a bad day.”)

How big is Minit’s opportunity? Hofshy points to Viddy, another video-sharing app, which has tens of millions of users and is adding another 500,000 a day. Minit will start its own massive marketing push by the end of 2012.

Tishby may be a well-known celebrity, particularly in Israel, where she is consistently on the “Sexiest Women in Israel” list, but she identifies herself as a philosophical geek at heart.

“What is happening now is nothing short of a mutation,” she says, referring to the proliferation of technology and innovation. “We’re in the middle of a technological revolution and we don’t have the perspective yet to know what it’s doing to us or to our kids.”

But she’s optimistic about how apps such as Minit can further change social interaction. “If anything, we’re providing a virtual space to increase human closeness,” she asserts.

In any case, copping a line from Star Trek (in which she once had a supporting role), “I really think that resistance [to technology] is futile. It’s just a matter of managing, keeping an eye on our children. But we can’t block it out. It’s where the world is going.”

Want to know more about Tishby’s thoughts on the future of tech? Send her a video message.

UNCOVER ISRAEL - Get the ISRAEL21c
Weekly Edition free by email
Sign Up Now!
Bring Israel's story to life.
Millions of people around the world rely on us to gain a deeper understanding of Israel. We are the trusted source for original content you won't find anywhere else.
You can make a difference. Donate today to support journalism that brings Israel’s story alive.
SUPPORT ISRAEL21c
Read more on:   Noa Tishby, Minit, Technology, Mobile