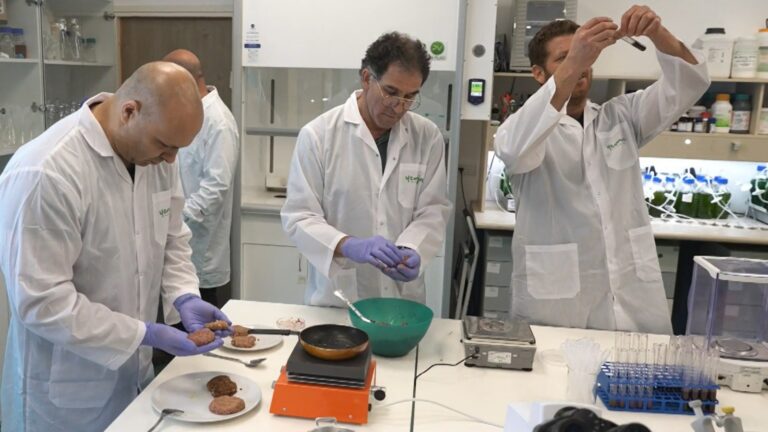 It’s an unfortunate truth that vegetarian burgers often suffer from a somewhat dry texture. But now, thanks to an innovative use of microalgae, herbivores are also getting a chance to sink their teeth into what looks and feels like a bloody, oozing piece of meat.

“While working on a new formulation for cosmetic applications, we serendipitously discovered that this specific composition yields a substance that resembles blood in appearance and texture,” explained Yemoja cofounder and CTO Amikam Bar-Gil.

“Encouraged by the first test results, we decided to push the boundaries further and take it to the next level, trying it out in test products. The results were an immediate proof of concept.”

According to the company, the plant-based meat industry often uses beetroot juice or other color additivities to turn meat substitutes an attractive red color in their raw form, but these don’t always keep their color in the cooked stage. To achieve the juicy look, companies often use sugars.

Yemoja’s solution browns up when sizzled and also congeals like real meat juices.

“We found the polysaccharides within this particular algae species express a viscosity similar to gelatin when cooked. Its natural fiber also awards an appealing crunchiness and emits an appetizing meaty aroma,” Bar-Gil noted.

The startup is now piloting its microalgae ingredient with one plant-based startup and another cultured meat producer and is reporting promising results. Who knows, it might soon come to an appetizing-looking veggie burger near you.

UNCOVER ISRAEL - Get the ISRAEL21c
Weekly Edition free by email
Sign Up Now!
Bring Israel's story to life.
Millions of people around the world rely on us to gain a deeper understanding of Israel. We are the trusted source for original content you won't find anywhere else.
You can make a difference. Donate today to support journalism that brings Israel’s story alive.
SUPPORT ISRAEL21c
Read more on:   News, Food tech, burger, Alternative Protein, vegan, microalgae