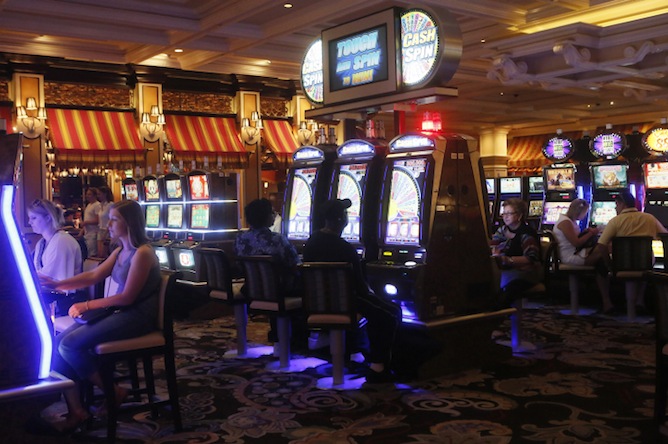 Could this Las Vegas scene one day be played out in the Negev? Photo by Miriam Alster/FLASH90

Israeli politicians have always been united in their opposition to one topic: Casinos in Israel. But now, according to reports coming out of Nevada, the chips might be on the table for the Negev Desert.

Gambling in Israel is legal but is very restricted. You can gamble through the state lottery or Israel Sports Betting Board. There are a number of casino cruises that sail from Haifa and Eilat. But since the October 2000 demise of the Austrian-run Oasis Hotel Casino Resort in Jericho, there’s no physical casino anywhere in Israel.

Consul General of Israel in Los Angeles David Siegel was quoted by the Las Vegas Review-Journal saying that he believes building a casino in the Negev Desert is a good bet. Moreover, Siegel revealed that it was Nevada Governor Brian Sandoval – who knows a thing or two about casino revenues — who threw the dice back on the table with regard to an Israeli casino, possibly at Mitzpeh Ramon.

The idea for a casino in the country’s southern tourist hotspot is not new. In 1995, the government’s Gavish Committee on Casinos recommended that Israel should open as many as five casinos – under certain conditions – to boost southern tourism. However, no casino was ever built.

Sandoval, who visited Israel in October as part of a trade mission to diversify Nevada’s economy, raised the idea when he met with Prime Minister Benjamin Netanyahu and President Shimon Peres. Building a casino was not the goal of his mission, but turned out to be an exciting offshoot.

“I think it’s an area of interest,” Siegel told the Las Vegas newspaper. “It’s not in the tangible phase yet, but it’s something that we’re looking at.

Before Nevada legalized gambling in the 1930s, Las Vegas was a desert town with about 5,000 residents. Today the city hosts 40 million visitors a year, and gaming funds one-fifth of the state budget.

Siegel was quoted as saying that he believes Israel could use Nevada’s knowledge of how to “build cities in the desert,” citing that the Negev accounts for 60 percent of Israel’s land mass but holds only eight percent of the country’s population.

“We can benefit from your expertise,” Siegel said. “Gaming could add to our tourism.”

Sandoval’s trade mission here a couple months ago was mainly focused on ways Israel and Nevada could partner in business enterprises and academic research and development. A couple of agreements in water management and geothermal projects were signed.

But the big news has so far remained under the radar: The mission also reignited the idea that Israel could become the newest gambling hotspot on the international casino circuit.

UNCOVER ISRAEL - Get the ISRAEL21c
Weekly Edition free by email
Sign Up Now!
Bring Israel's story to life.
Millions of people around the world rely on us to gain a deeper understanding of Israel. We are the trusted source for original content you won't find anywhere else.
You can make a difference. Donate today to support journalism that brings Israel’s story alive.
SUPPORT ISRAEL21c
Read more on:   Negev, Negev Desert, casino, Spotlight on Israel