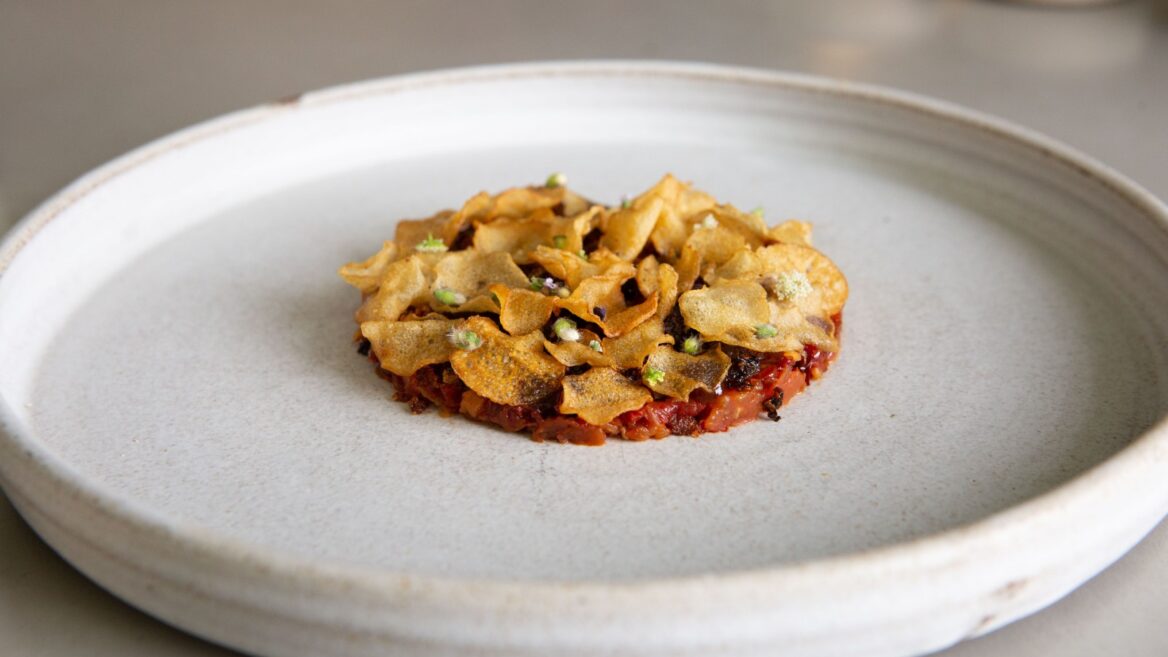 In the middle of Covid-struck South Tel Aviv, a magical wonderland of vegetables exists within the realm of the traditional but recently trending Levinsky Market.

Oparestaurant is a departure from the grit and grime of the surrounding area. Run by Israeli-born chef restauranteur and Culinary Institute of America trained chef Shirel Berger, the restaurant specializes in sustainable vegan fine dining.

Opa is the epitome of farm-to-table sustainable cooking, drawing dishes and inspiration from its urban rooftop garden and the produce of small specialty farmers of the market.

Berger is a composer, and fruits and vegetables are her musical notes. She is one of those magician-like chefs whose fine dining wizardry makes one forget to even miss the meat. 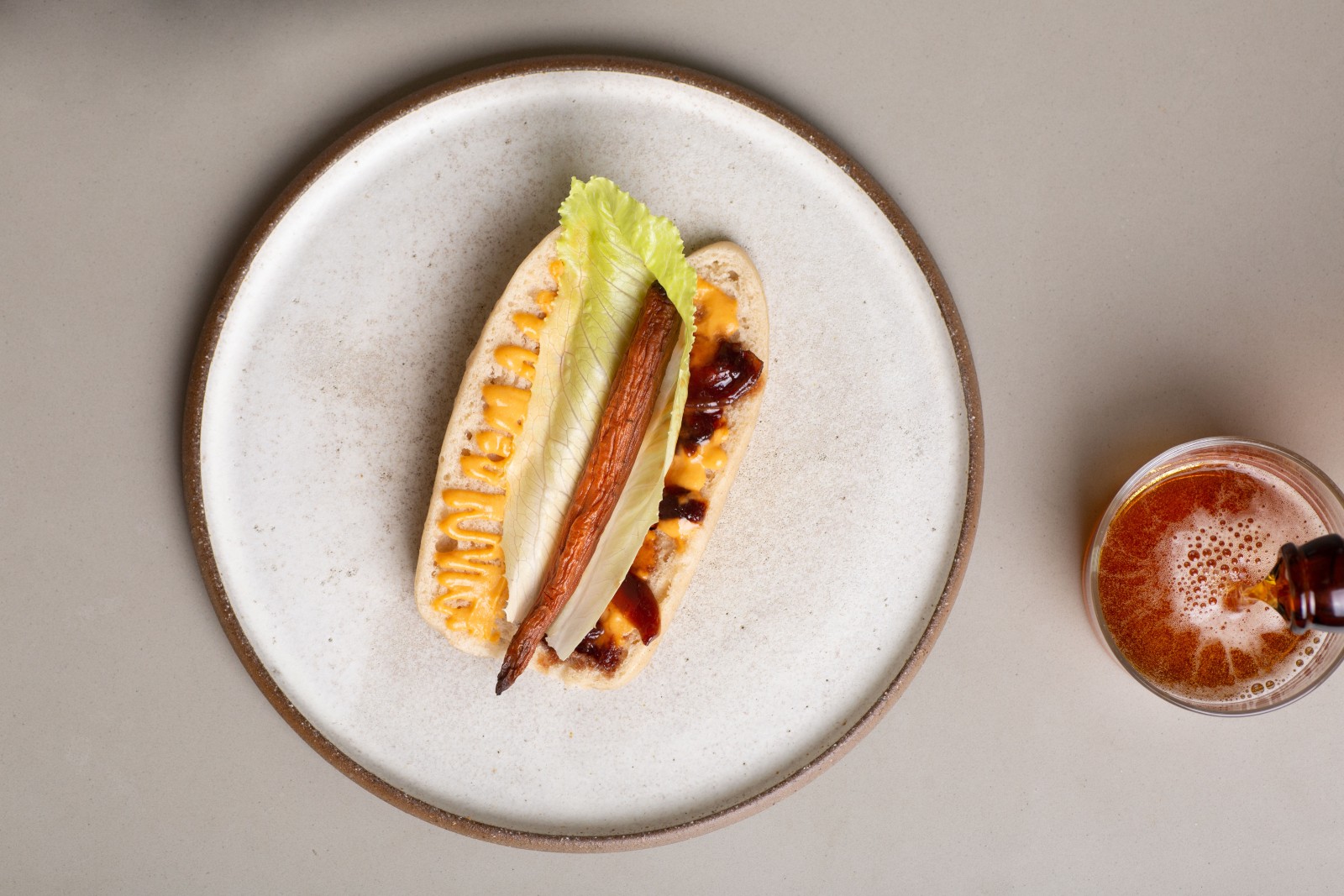 This brunch menu item at Opa features a roasted carrot in place of a sausage. Photo by Aviv Shkury

Opa (“grandfather” in German) is in the right place at the right time in post-modern Tel Aviv, a city whose cuisine has morphed into the kind of celebratory veganism that makes thinly sliced roasted beets into a satisfying meal.

Berger’s focus is wholly set on honoring beautiful produce (and a few nuts). Her menu doesn’t even feature the beans or legumes that tend to steal the spotlight in vegan cooking. She highlights singular items through unexpected and creative cooking techniques. 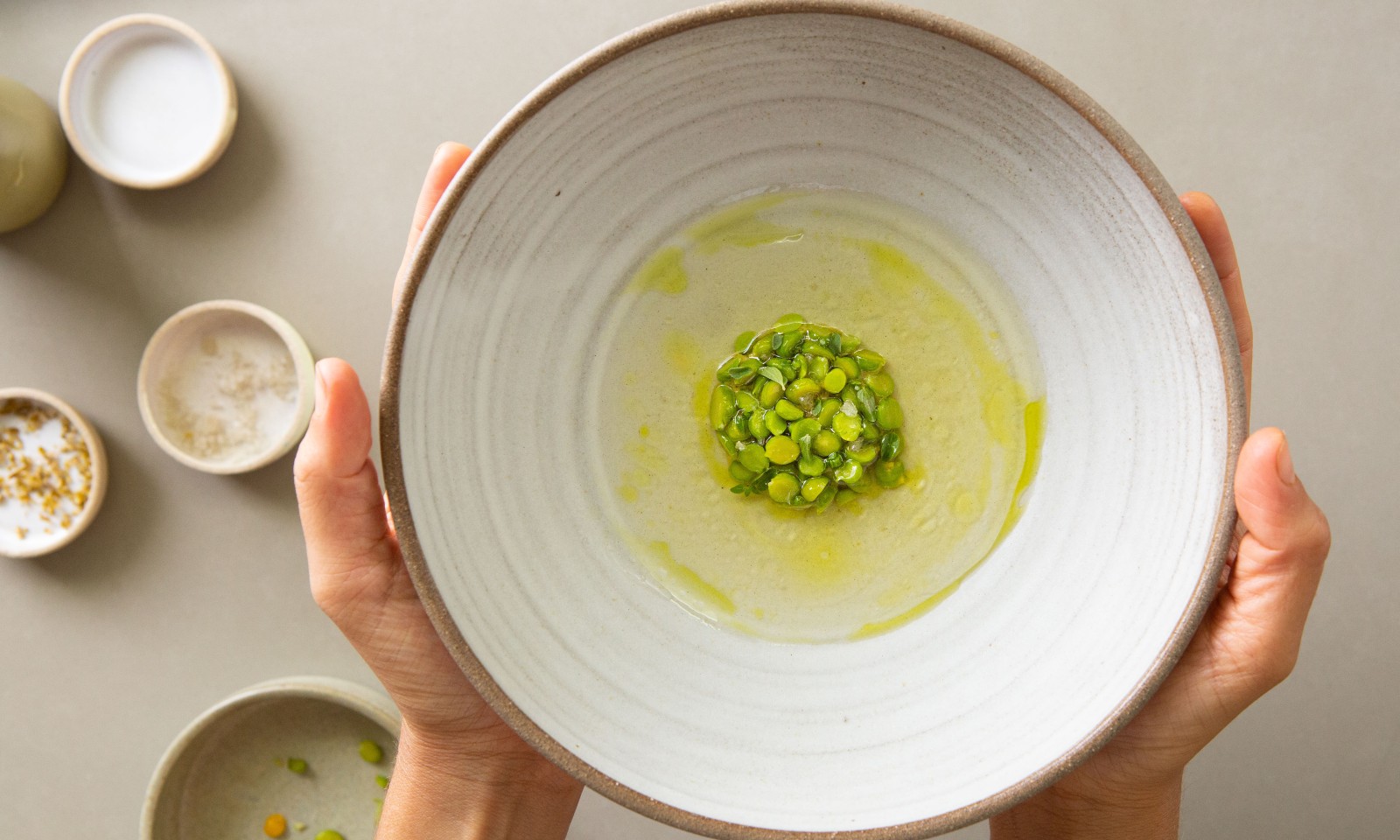 Dining at the restaurant is filled with delightful surprises, as the menu, a minimalistic matter-of-fact list of basic ingredients, makes a point to not give away what you’re going to get.

I spoke with Berger to see how she and her staff were surfing the tide in the current economy of shutdowns and restrictions, as well as general uncertainty for business owners.

I was momentarily concerned when she described her current state as “in chaos” until I realized hers was the good kind of panic that comes from a packed restaurant — at least as packed as places are allowed to be right now.

Opa is booked “at least two weeks in advance,” she tells me. “I’d say we’re going back to normal, if not a more chaotic state.It’s like opening a restaurant all over again from the beginning.” 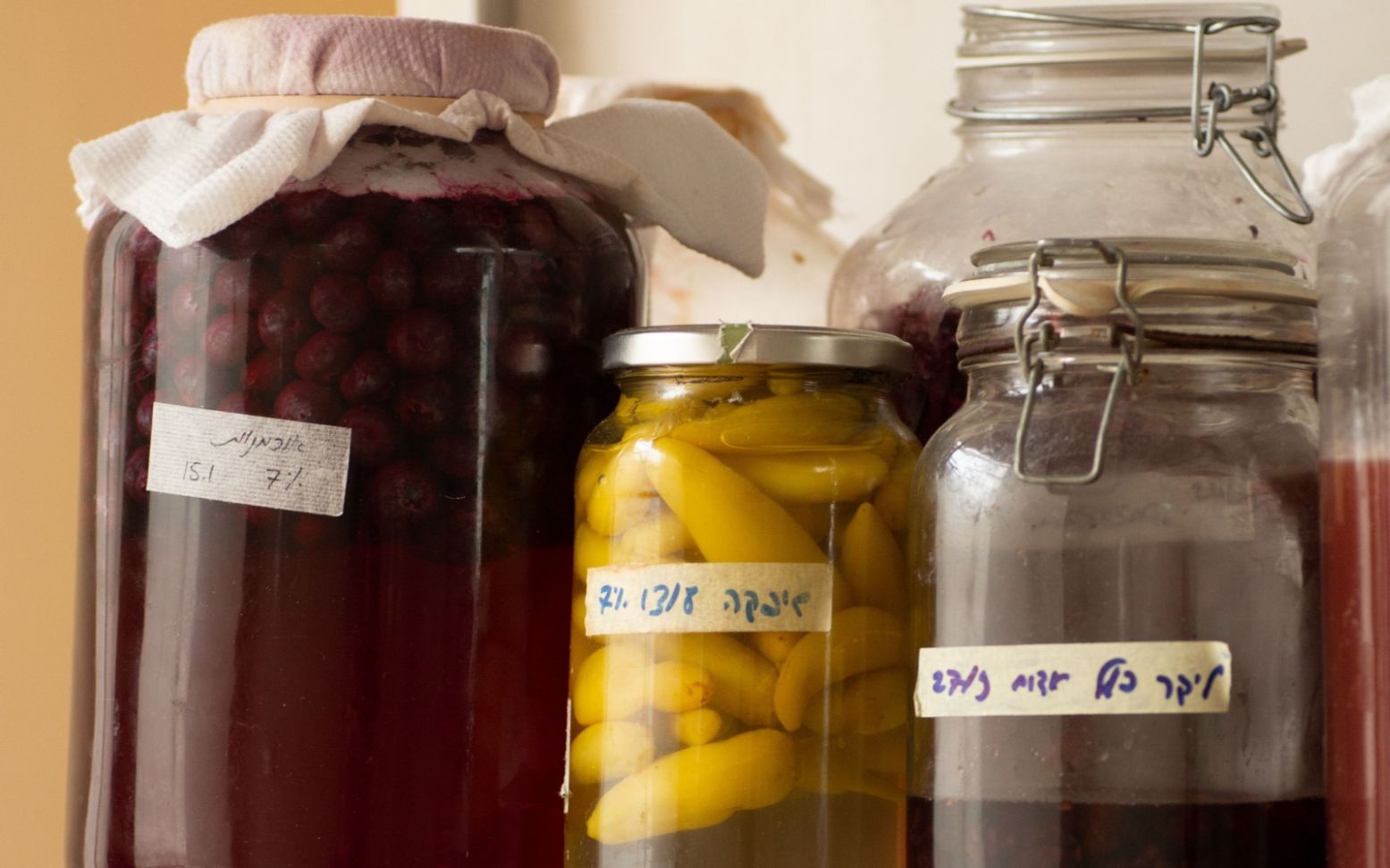 Opa staff pickled berries and vegetables to preserve them during the corona shutdown. Photo: courtesy

The sudden restaurant shutdown imposed on March 15 in Israel left Berger, and presumably other chefs, in a dilemma of what to do with all the food. She and her staff canned and pickled whatever they could to keep it from going to waste.

And of course they had to tend their 120-meter traditional garden (no trendy hydroponics here) of herbs and other edible plants. Other than that, the restaurant relies on small local farms for produce. “[During the quarantine time] I had cooking revelations, mostly regarding my desire to work only with small farmers. I mean, that’s what we did before, but sometimes I worked with other suppliers as well,” Berger says.

“Now we’re really being more sustainable about where the food comes from and minimizing food miles, while trying not to order as many things from outside of Israel.” 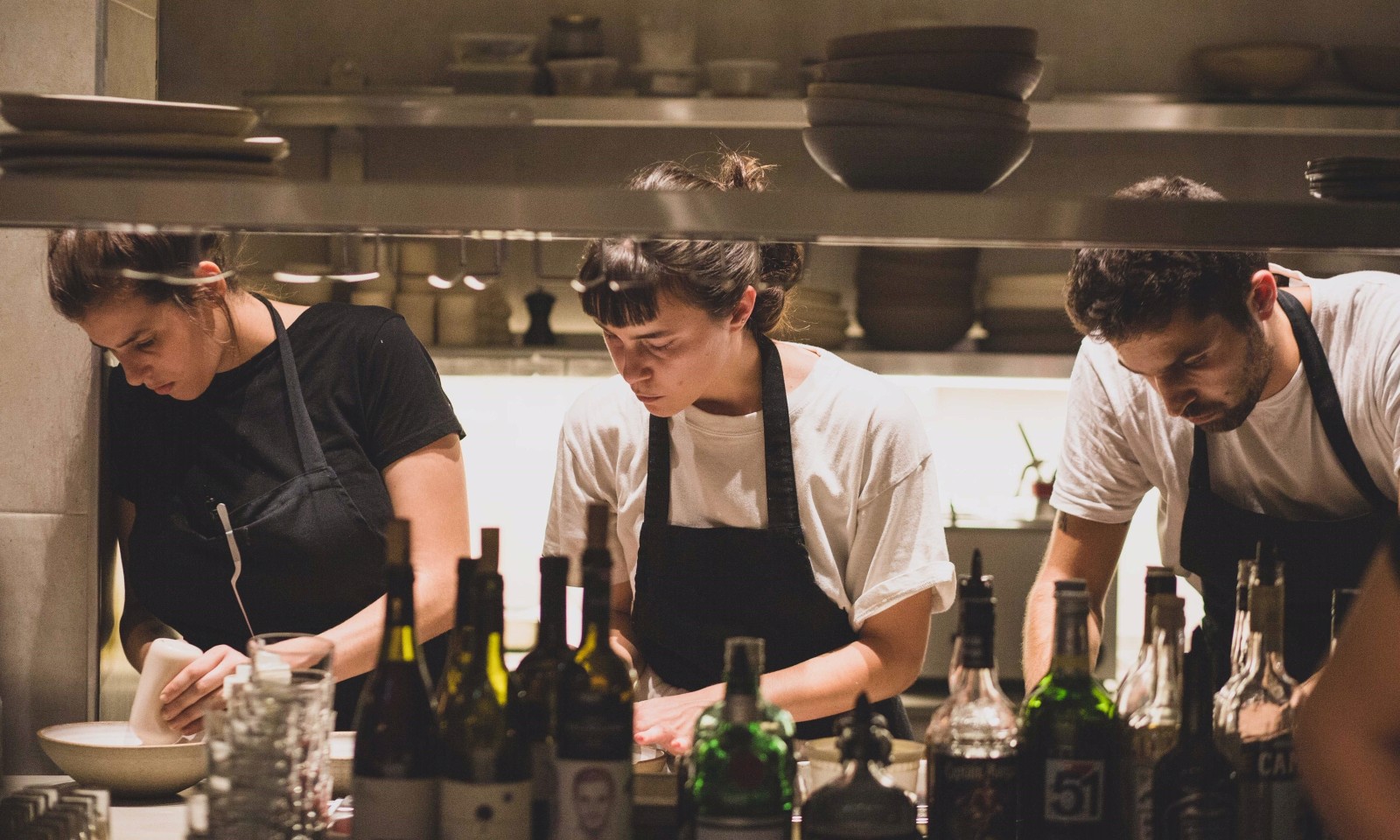 In the restaurant industry, it’s hard to find time to pause and think between prep time, busy services, and sneaking home late at night for a few hours to rest your feet.

That is until the rug gets pulled out from under you. Berger now dreams of making the rooftop garden the setting for the restaurant’s special dining events.

“We’re going to have a very intimate fine dining dinner and wine pairing once a month,” says Berger. She hopes to get it off the ground (no pun intended) soon.

Berger’s recipe below highlights the sweet red cherries in season in Israel right now, infusing them with the mild heat from jalapeño peppers and pairing them with warmly spiced charred potatoes and a sauce of homemade smoked paprika almond milk. 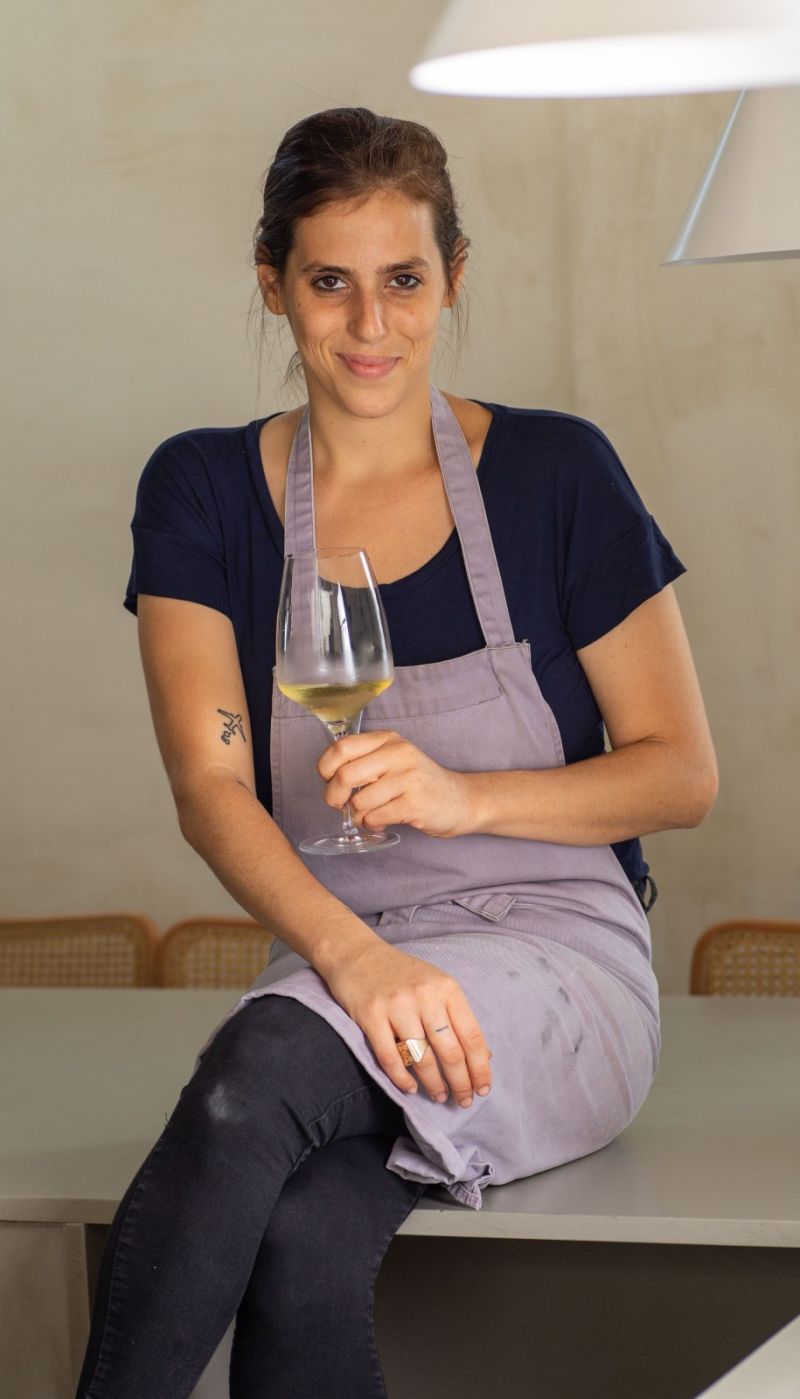 For the almond milk: