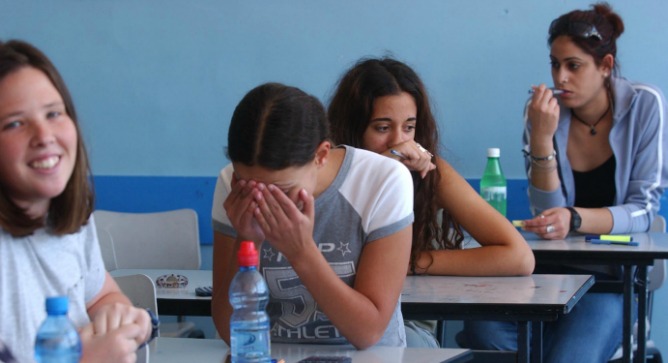 A computer program can redirect attention away from anxiety triggers. Photo by Flash90

An initial clinical trial in Israel showed that a computer-based technique called attention bias modification (ABM) can relieve anxiety in children without the use of drugs.

The relatively new treatment was developed at the lab of Prof. Yair Bar-Haim of Tel Aviv University’s School of Psychological Sciences in collaboration with several labs around the world. It had never before been tested on kids suffering from anxiety disorders, estimated to encompass a huge population of five percent to 20% of all children.

“This could be a game-changer for providing treatment,” Bar-Haim said.

Early intervention saves many anxious children from becoming anxious adults. But drugs cause unpleasant or even dangerous side effects, and both drugs and cognitive behavioral therapy are effective in only about 70% of pediatric cases.

ABM is as effective as medication and cognitive therapy for children and is preferable in several ways, as reported in the American Journal of Psychiatry by Bar-Haim’s team from the Adler Center for Research in Child Development and Psychopathology at Tel Aviv University in cooperation with the Feinberg Child Study Center at Schneider Children’s Medical Center in Petah Tikvah.

In addition, he tells ISRAEL21c, this method does not pose any of the physical risks associated with medications and it doesn’t require a highly trained professional as cognitive behavioral therapy does. The program can be accessed via the Internet.

Bar-Haim explains that anxious individuals have heightened sensitivity (an “attention bias”) toward threats that the average person simply ignores.

ABM therapy begins with identifying an attention bias by a “dot–probe test,” presenting the patient with two pictures or words — one threatening and one neutral. The pictures then get replaced by a dot on the screen, and the patient presses a button to indicate the dot’s location. People with an attention bias toward the threatening image show a faster response time to the dot appearing in its place than to the dot appearing in place of the neutral image.

The location of the dot target is manipulated to appear more frequently beneath the neutral word or picture. Gradually, the patient begins to focus on the non-threatening stimulus instead of the threatening one, normalizing his or her attention bias pattern and thereby reducing anxiety.

Bar-Haim and his colleagues administered 480 dot-probe tests to patients at the Child Anxiety Clinic at Schneider Children’s Medical Center. Some 55% of the eight- to 14-year-olds had a primary diagnosis of separation anxiety disorder, 22.5% had generalized anxiety disorder, 20% had specific phobia, and 2.5% had social phobia. Seventy-five percent were also diagnosed with a second anxiety disorder.

After ABM treatment once a week for four weeks, approximately one-third of the patients no longer met the diagnostic criteria for anxiety disorder.

Additional pediatric trials are now under way at more than 20 sites across five continents, in collaboration with the US National Institute of Mental Health.

“Psychological disorders are complex, and not every patient will respond well to every treatment,” says Bar-Haim. “It’s great to have new methods that have a basis in neuroscience and clinical evidence.”