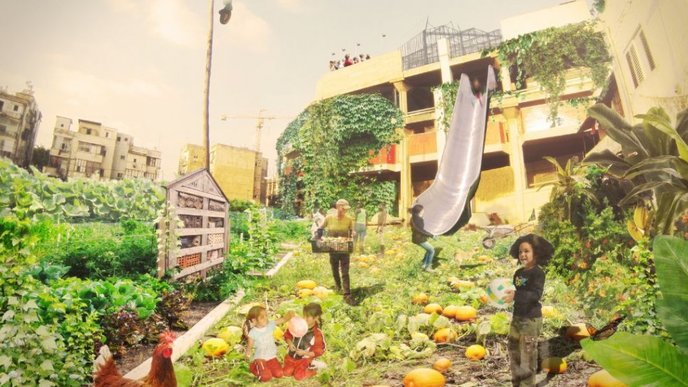 An artist's rendition of what Tel Aviv's Central Bus Station could look like after it is revitalized as a center for urban ecology. Illustration courtesy of Dana Mor/Onya Collective.

An artist’s rendition of what Tel Aviv’s Central Bus Station could look like after it is revitalized as a center for urban ecology. Illustration courtesy of Dana Mor/Onya Collective.

But now commuters’ faces are lighting up at the sight of some 30 “interventions” scattered about: funky plantings, plucky industrial design, “agro-poetry” billboards, urban nature photography and avant-garde artworks brightening surfaces.

All of this has been accomplished so far with zero funding by the Onya Collective  of young eco-conscious visionaries working in cooperation with the Tel Aviv New Bus Station Management Company, Dan Public Transportation, the municipality, ecological NGOs and Israeli industries.

The Onya Collective began in 2014 as an outgrowth of the core members’ participation in the New York-based WorldWide Storefront  urban art initiative spanning 10 cities around the world.

Among 1,200 celebrants at the Next Station exhibition’s gala opening last November were many Israelis who had never set foot in the seedy station before.

“They are first starting to see this place, which most people avoid, as relevant and interesting,” says Onya founding member Robert Ungar. 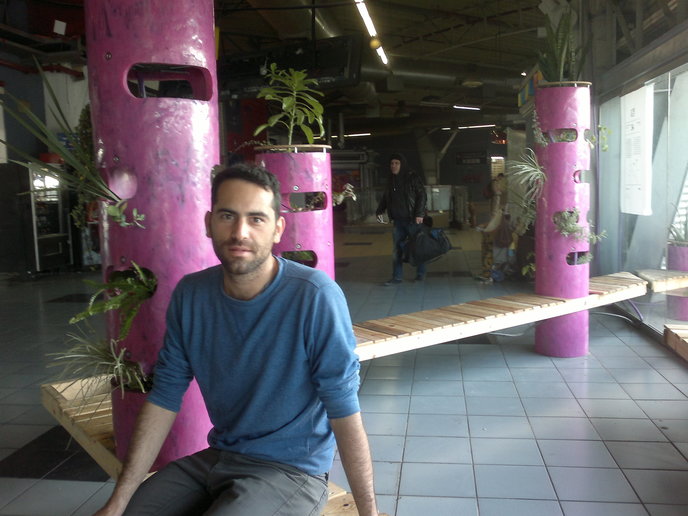 “Since the opening, we’ve had hundreds come for organized tours and urban gardening workshops in cooperation with Tel Aviv University and the Ministry of Agriculture, and for arts events. We’ve found this place to be a good platform to show how urban guerilla intervention can change a place.”

The installations lend an aura of hope to the station’s exterior and four functioning levels, and even the neglected entryway to the massive ghost town of its three bottom stories.

Ungar took ISRAEL21c on a tour of Next Station, starting at the top.

On the seventh floor, the only place where natural light enters the building, donated industrial waste materials including pink PVC pipes, wooden pallets and plastic paint buckets have been upcycled into a seating area, the Vertical Tea Garden.

The watering system for the aromatic herbs was designed by experts from drip-irrigation pioneer Netafim, using wastewater from the station’s air-conditioning system.

“Like acupuncture, it’s a small action in a specific place that has a much wider and bigger effect,” he says. “We could bring this system to public spaces all over the city.”

Artists, agriculture companies and nonprofits answered Onya’s call for planning the installation, and dozens of volunteers constructed it. 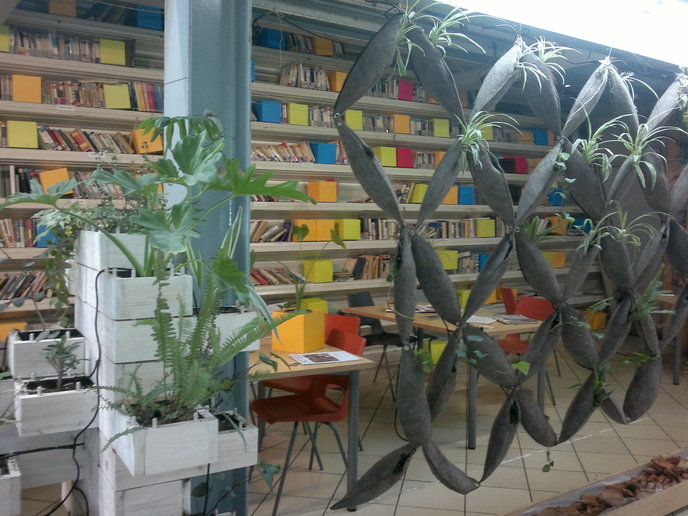 The Book Station with its experimental mashrabiya.

“Enthusiasm was high because the station has such a bad reputation and they wanted to bring some new fresh ideas of what could be in this space,” says Ungar.

The Book Station, formerly a foul-smelling corner frequented by stray cats and vagrants, is now a free lending library holding books and periodicals in 12 languages along with castoff tables and chairs from Tel Aviv schools.

The Book Station is offset from the corridor by a modern take on the Arabic mashrabiya latticework divider. Plants peek out of pockets fashioned from an experimental breathable textile of recycled fibers from BLDVEG (Building Vegetation). Industrial designer Tomer Ashkenazi added a modular wooden planter system resembling LEGO bricks. Everything is watered by the air-conditioning system. 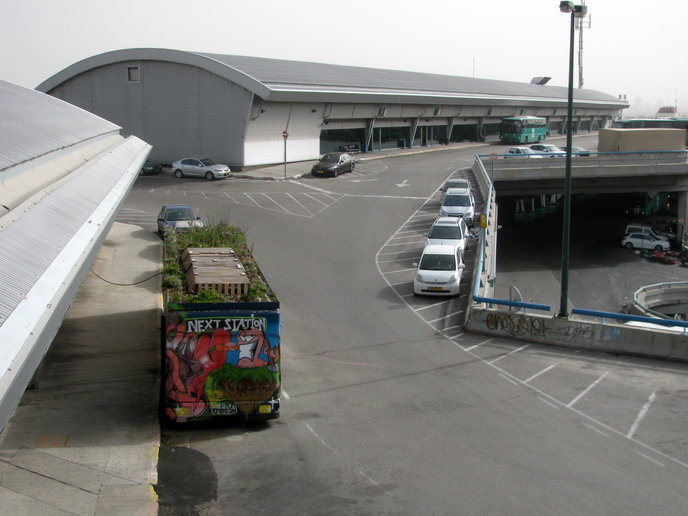 This old bus has been greened up from top to bottom.

On the curb outside, an old Dan bus used as a lounge for the station’s maintenance staff has been decorated by street artist One.Love and topped with a green roof  by BLDVEG to cool the interior naturally.

Alongside, vegetables grow in pots – not for eating, considering the amount of exhaust that assaults the plants every day, but to show what could be.

“On these 44 dunams [nearly 11 acres] of land, nobody left even a meter for trees,” Ungar laments. 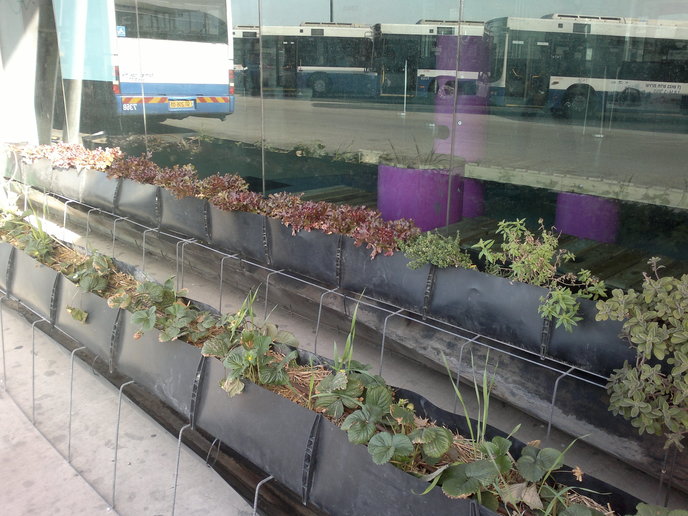 Buses reflected in the window next to the outdoor plantings.

Elsewhere on Level 7 is the workroom that inspired the name of the collective. This cavernous area, populated by pigeons and refuse before being cleaned and turned over to Onya, boasts large circular windows like those on a ship – oniya in Hebrew.

“We imagine making this into an ecological design innovation hub for us and for others to come and experiment,” Ungar tells ISRAEL21c. “We could have saws and drills, and a plant nursery and an area with computers. It’s big enough to serve all these uses, if we get the investment.”

“Onya is a great example of a group of young social entrepreneurs that had a dream to change their city,” says Michael Vole, director of the Tel Aviv-Yafo municipality’s Young Adults Unit. “We’re excited to see that gradually they are making it happen. We were there to help from the beginning because we believe that young people in this city should know that they can change their neighborhoods, communities, the city and even the world. Their success is the success of the city.”

When the third-floor entrance to the bus station was closed off in 2002, the wide fenced ramp leading down into it from street level became a de facto garbage dump.

Just two months after the city gave Onya the padlock key, volunteers invited neighbors to a live concert in the space they’d turned into an urban music garden topped with a geodesic dome from the Israeli Bamboo Center. African and Israeli musicians entertained amidst potted fruit trees and other artistically placed greenery fed by eco-efficient water reservoirs from AgroCity.

Onya members envision this as a venue for cultural events and workshops on urban gardening and permaculture, perhaps serving as a common ground for the Israelis and African migrants of this troubled neighborhood. 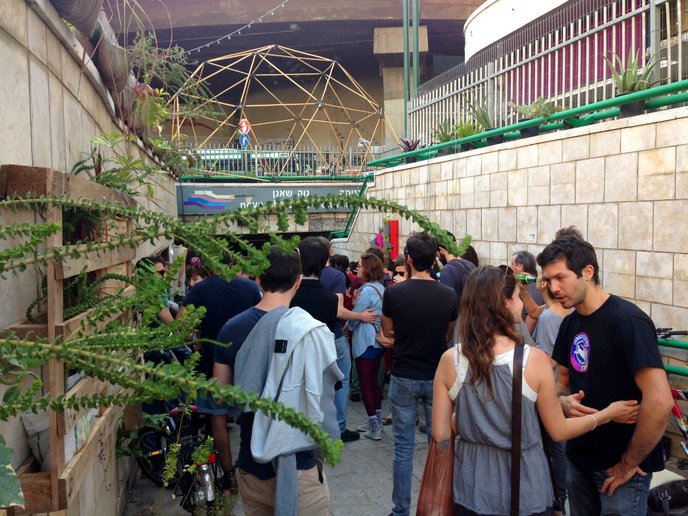 “Part of the power of the public space is to create connections between people; experiences that people can have together and see that we’re all human,” says Ungar. “Public spaces can create a better society.”

With another key, he unlocks the gate at the bottom of the ramp and we enter the eerie underground levels where six cinemas, 800 shops and other curiosities lie dormant. All you hear is the squeak of thousands of bats that moved in – ironically turning the desolate manmade space into a nature reserve.

Ungar has been told that within a few years, all bus routes to the Central Bus Station will be rerouted, leaving hundreds of already beleaguered shop owners to fend for themselves and a huge empty shell of concrete waiting to be repurposed.

“We can use this space somehow,” reflects Ungar optimistically. “The ‘soil’ is ready and the city is ready for us to find a donor or investment that can help us.”