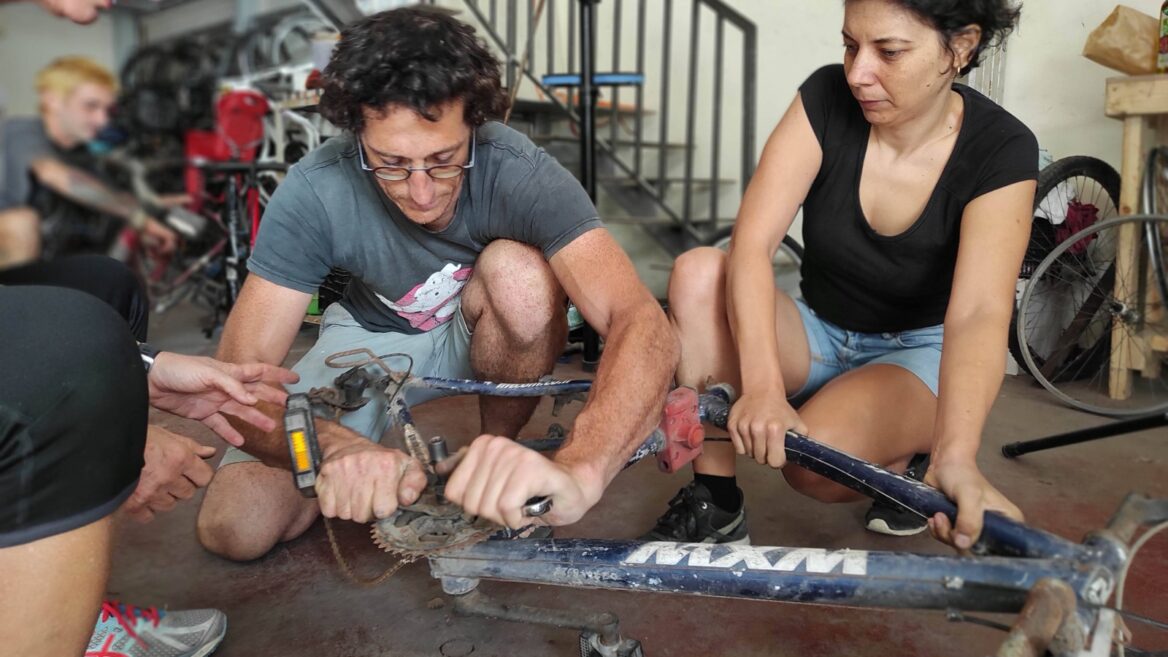 As a child, Nathanael Singer used to rollerblade to school in Tel Aviv. Later he switched to bicycling and developed a passion for biking around the city.

Five years ago, he combined his cycling enthusiasm with his determination to reduce the amount of trash in Israel into Pnimeet Bike Recycling,  an NGO that encourages people to re-use and recycle old bicycles and bike parts instead of throwing them into the garbage.

Singer came up with the idea of recycling bicycles during a stint in Paris where he delivered hummus and other street food on his own recycled tricycle. He discovered a Parisian store that sold old bikes and parts and decided to bring the idea to Tel Aviv.

His friend, Lior Levy, was skeptical and didn’t think it would catch on. But the two friends sponsored an event at a Tel Aviv community center that attracted an enthusiastic crowd. Singer tells ISRAEL21c that they realized, “We got to do it.”

Pnimeet Bike-Recycling has workshops in Jerusalem and Tel Aviv-Jaffa. The workshop on Salome Street in Jaffa is filled with old bicycles, parts and tools. There, volunteers show people how to fix broken bicycles so they don’t wind up in the trash. 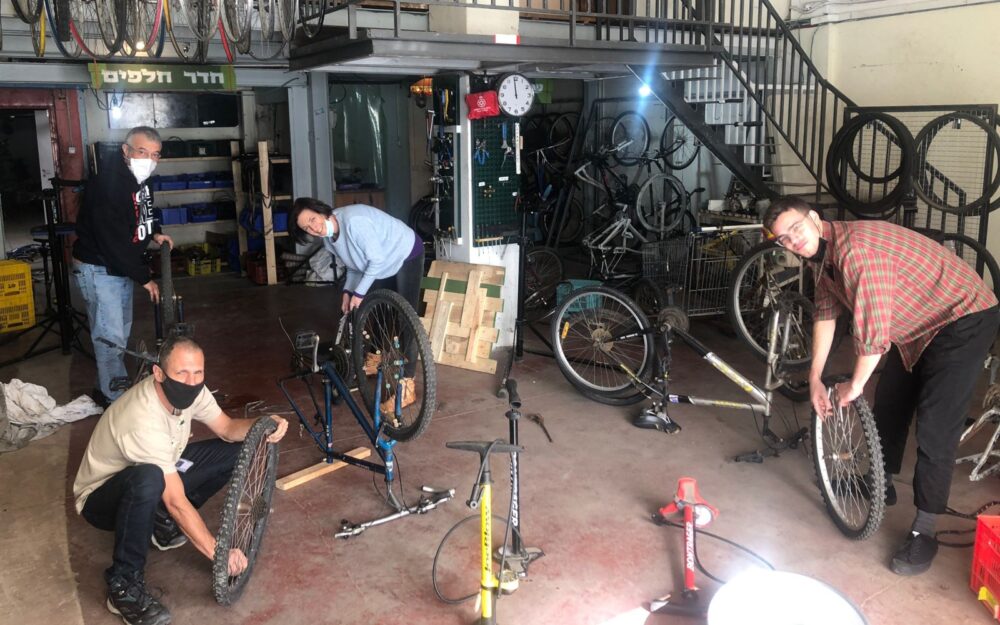 People repairing bicycles at the workshop in Jaffa. Photo courtesy of Pnimeet

For 150 shekels a year, people can come to the workshop to fix and build their own bicycles that they can then ride home.

The workshop also runs various events to promote cycling around the city and sponsors courses for youth.

“When young people learn how to fix broken bikes, it gives them self-esteem,” Singer said. “They succeed in doing something.”

As an industrial engineer, Singer likes to design and redesign things. He believes it is important to educate people to understand that instead of discarding a broken bike, they can fix it.

Singer himself has recycled and restored three bicycles that he uses to commute all over Tel Aviv.

He said he hopes to educate people about the “abundance of things that can be found on the street and then used.”

Only about 25 percent of Israel’s trash is recycled, he says, compared to roughly 50 percent among other OECD countries. 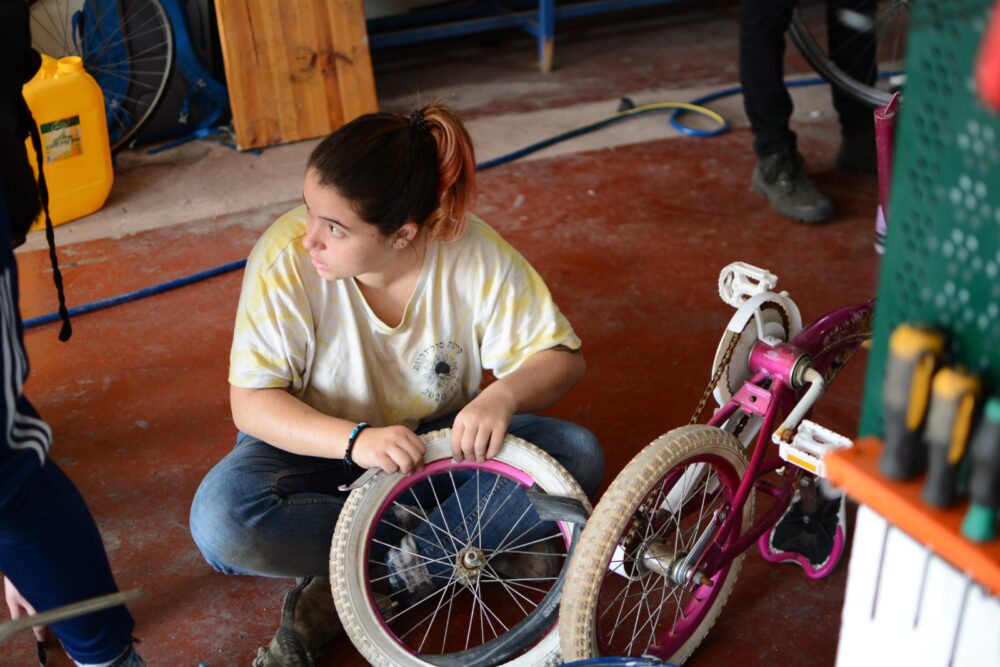 Dina Melamed fixing a bicycle at Pnimeet in Jaffa. Photo courtesy of Pnimeet

There are some bicycles that are worth thousands of shekels that wind up at Pnimeet and “people can get a really cool bike,” Singer said. “But I want this to remain a hobby for them, not a business.”

A sense of togetherness

Ady Zezak, 31, who lives in Jaffa, said she never even knew how to ride a bicycle. When she wanted to learn a short while ago, she heard about the “opportunity not only to reuse, recycle and create, but to learn about bicycles.”

She signed up at Pnimeet and learned how to fix a bicycle from volunteers like Smadar Ariel, 34, who said that when she started at the workshop, she didn’t know about bike mechanics but she was curious.

“I learned by doing,” she said. “The other volunteers were amazing and now I welcome newcomers and try to bring a sense of togetherness at the workshop.”

The workshop welcomes “everyone who wants to come,” Singer said. He said one of his passions is working with the Tel Aviv municipality to improve the bike lanes in the city.

“Today, people start biking on a lane that ends up in a tree,” he said with a mixture of humor and frustration. He believes, however, that City Hall planners are working hard to connect all the bike lanes into a network so that people can bike all over Tel Aviv within the next five years.

“Tel Aviv is going in the direction of Amsterdam,” he said confidently.

For more information (in Hebrew) about Pnimeet, click here

UNCOVER ISRAEL - Get the ISRAEL21c
Weekly Edition free by email
Sign Up Now!
Bring Israel's story to life.
Millions of people around the world rely on us to gain a deeper understanding of Israel. We are the trusted source for original content you won't find anywhere else.
You can make a difference. Donate today to support journalism that brings Israel’s story alive.
SUPPORT ISRAEL21c
Read more on:   Environment, Social Action, recycling, bicycles, Pnimeet