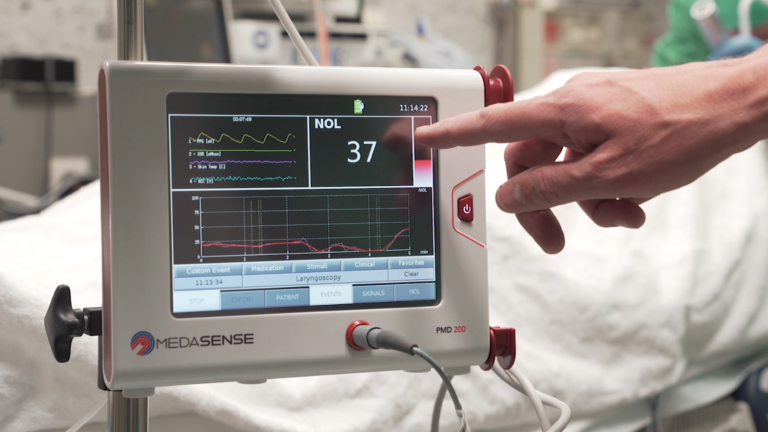 Monitoring pain response levels during surgery with technology from Israel’s Medasense can help reduce postoperative pain, according to a study in the British Journal of Anaesthesia.

Study results showed postoperative patient pain scores were one-third lower when pain medication during surgery was guided by the Medasense device. In addition, stress hormone levels (ACTH and cortisol) were up to 50 percent lower in these patients.

“High pain scores following surgical procedures are common and are associated with poor patient outcomes; but on the other hand we know that excessive use of opioids administered during the surgery itself to prevent postoperative pain can cause other complications,” explains study leader Dr. Albert Dahan of Leiden University Medical Center in The Netherlands.

The study followed 50 patients undergoing elective abdominal surgery in a two-center randomized controlled trial. Some of the patients received analgesics during surgery based on Medasense’s nociception level (NOL) index. The control group received analgesics according to standard hemodynamic monitoring.

The researchers reported that while there was no increase in overall dosing in the NOL-guided group, these patients reported less pain in the first 90 minutes after surgery compared to the control group.

“Clinicians using NOL monitoring to guide analgesia are able to identify more accurately when a patient’s pain response level rises and to tailor analgesic medication more accurately. As we found that opioid dosing overall was not different between the groups, we can confidently relate the difference in outcomes to the timing of individualized dosing as guided by the NOL monitor,” Dahan said.

Based in Ramat Gan, Medasense recently raised $18 million in a series C round. Its flagship PMD-200 device is distributed in Europe exclusively by Medtronic; is cleared for marketing also in Canada, Latin America, Israel and Australia; and enables connectivity with Philips patient monitors. Medasense has also been implementing its technology on Covid-19 ventilated patients.

Medasense founder and CEO Galit Zuckerman-Stark said the company is in the process of obtaining FDA approval for commercialization in the United States.