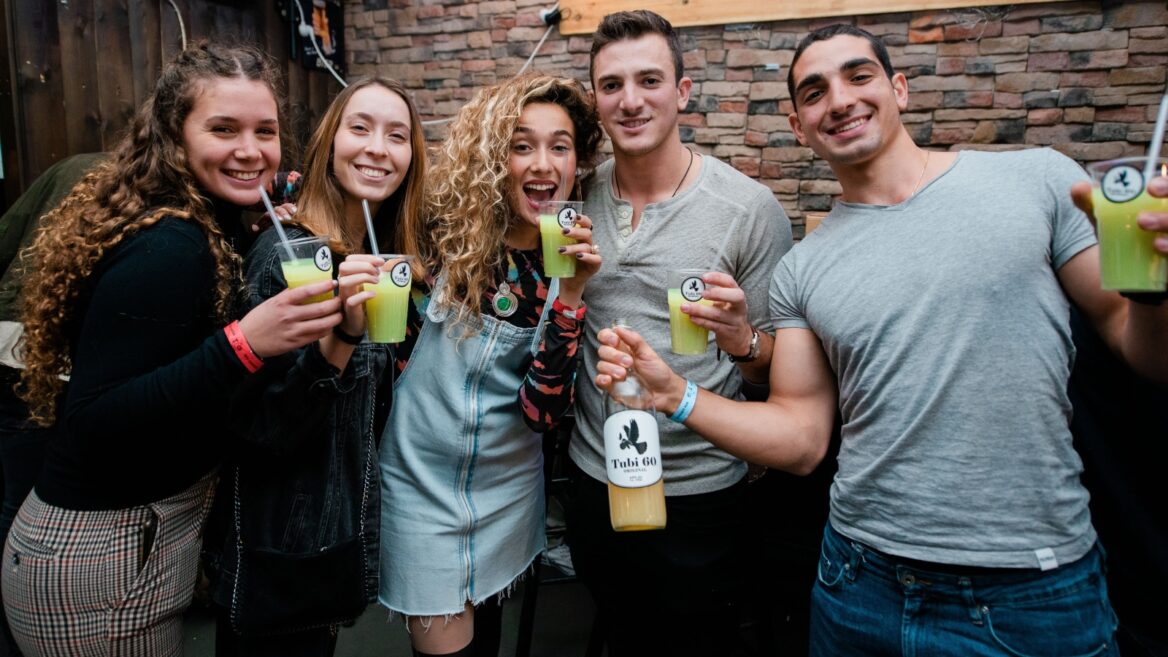 On a city bench in Haifa’s Turkish Market — a pedestrian area packed with hipster bars, take-out joints and sit-down restaurants — a lone black sticker reading “Tubi 60” has been haphazardly adhered to the surface.

The place where this unusual alcohol started, Haifa is clearly Tubi 60 territory. But seven years on, while this original Israeli liquor might have come up small, with profit the last thing on its agenda, it’s now poised to make it big around the globe.

From its inception, rumors have swirled around the brand, stemming from the secretive factory built in one of Haifa’s rougher neighborhoods, the ambiguous contents of the drink, and the euphoria felt by those who drink it.

Tubi 60 originated with an unofficial mafia of friends, a kind of fraternity with mild Peter Pan syndrome, eyes hidden behind sunglasses.

They were living the hard-working hipster lifestyle, sending logoed sweatshirts that read “Come sit with us” and drinking glasses with the words “pure happiness” printed on them to those showing loyalty to the brand.Founder and CEO Hilal Tubi refers to this as sending “positive energy and love.”

The story of Tubi 60 may have started with the Tubi brothers in Haifa, but once the Tel Aviv party scene got a hold of it, all bets were off. 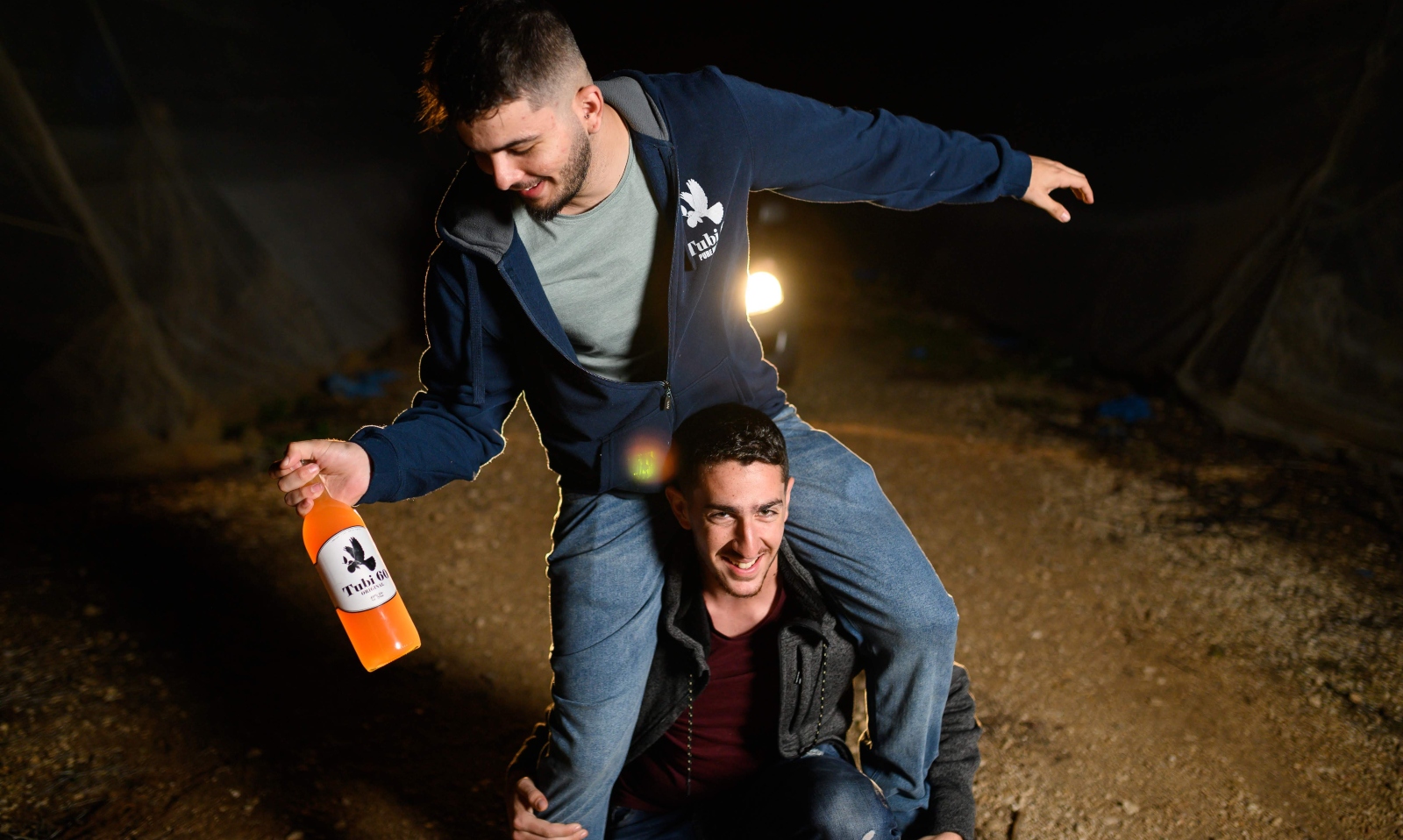 It wasn’t long before it spread to other cities across the country. Barkeeps, hellbent on incorporating local liquors into their menus, were busy enhancing or disguising the unusual taste (depending on whom you asked), creating cocktails that mixed Tubi with everything from Jägermeister to strawberry juice.

A hard alcohol whose true contents are known only to a select few, Tubi 60 is ambiguously described as containing “herbs, spices and citrus,” claiming to leave drinkers witha happy feeling and no day-after hangover.

After pressing Hilal Tubi about what’s in the drink, he disclosed to ISRAEL21c that Tubi 60 contains lemon, ginger, mint and cumin, but not only.

He and his brother created the unusual alcohol in their parents’ Haifa apartment back in 2012.

I first met Hilal Tubi in 2017 at a Haifa restaurant known for world tapas and boutique Israeli wines. It was the first on-record interview he’d ever given a reporter.

The man is somewhat of a mystery, posting to social media only every few months, and oddly missing in the brand’s official promotional materials even though he is the brand to those who know him.

At the time I met him, Tubi 60 was at its peak in Israel’s party scene and was on the cusp of graduating to international sales.

Today, Tubi 60 is sold in eight US states including New York, Texas and Florida; as well as in Germany, Switzerland, Hungary and Romania. 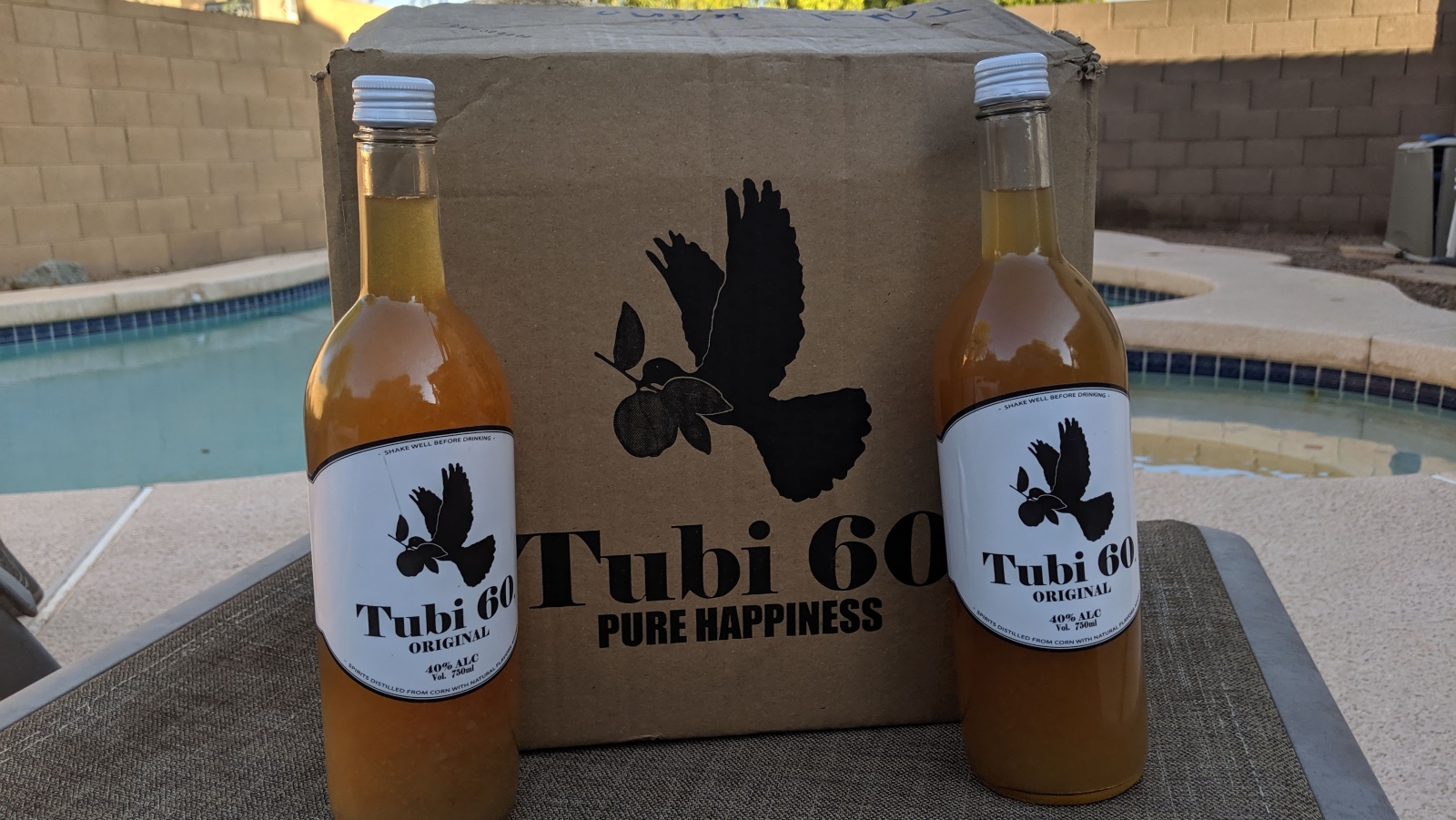 “The only thing that has changed is that we have been lucky enough to be able to grow and develop so we can serve more brothers and sisters all around the world and become apositive part of their lives,” Tubi tells ISRAEL21c. He is profusely thankful to the brand’s fierce supporters.

Evan Hoffman of Tempe, Arizona, is one such super fan. He first tried Tubi 60 at the bachelor party of a Haifa-based Israeli friend he met on a Birthright Israel trip.

“I remember not really liking it [at first], which is surprising since I now love it so much,” he recalls. 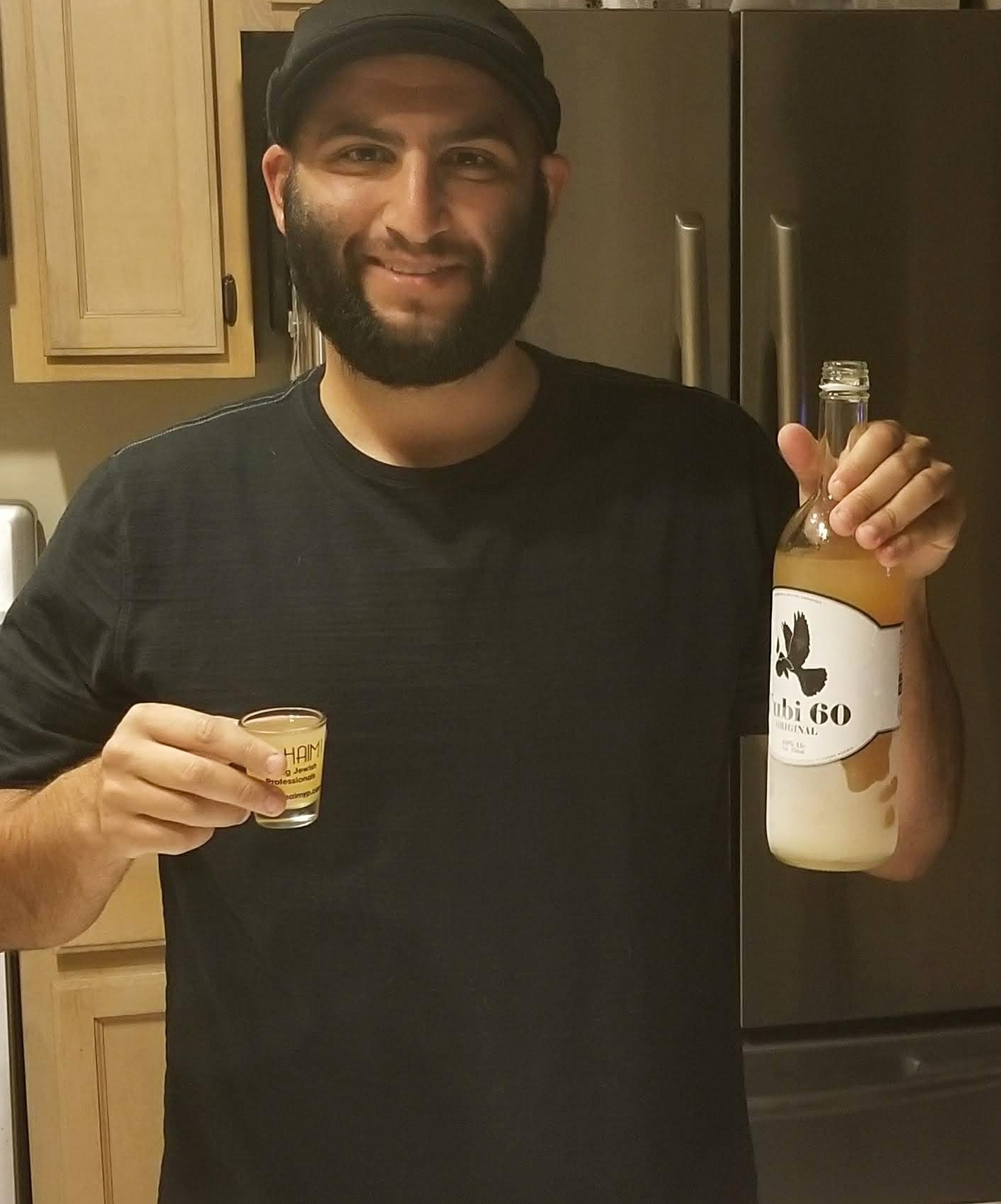 “Everyone told me all the stories and rumors about what was in it, how it makes you feel, and the fact that it was created in Haifa. I think that is what really made me stick with trying Tubi whenever I came back to Israel,” says Hoffman, who started bringing bottles home toshare.

“I like to see how people react to the shot when they have never had it,” says Hoffman. This reaction is affectionately called “The Tubi face” by fans (described here by a Texas bartender).

Like the face of a baby trying a new food, “Tubi face” refers to the confused look as the drinker tries to crack the code on what exactly they are tasting.

Unfortunately for Hoffman, strict Arizona liquor laws mean that even though the drink is sold at liquor stores in some states, he can’t have it shipped to his house.

“So now, my only option is to drive to the Los Angeles area to buy it.This past summer, my friend was driving to the LA area, so I ordered every bottle that the two locations near to him had.”

Like a brand ambassador, Hoffman creates social-media posts dedicated to his love of Tubi 60, joining others who take photos of the drink in popular travel spots, like Thailand and Las Vegas. While he does it just for fun, he jokes, “I’m still waiting for my sponsorship.” 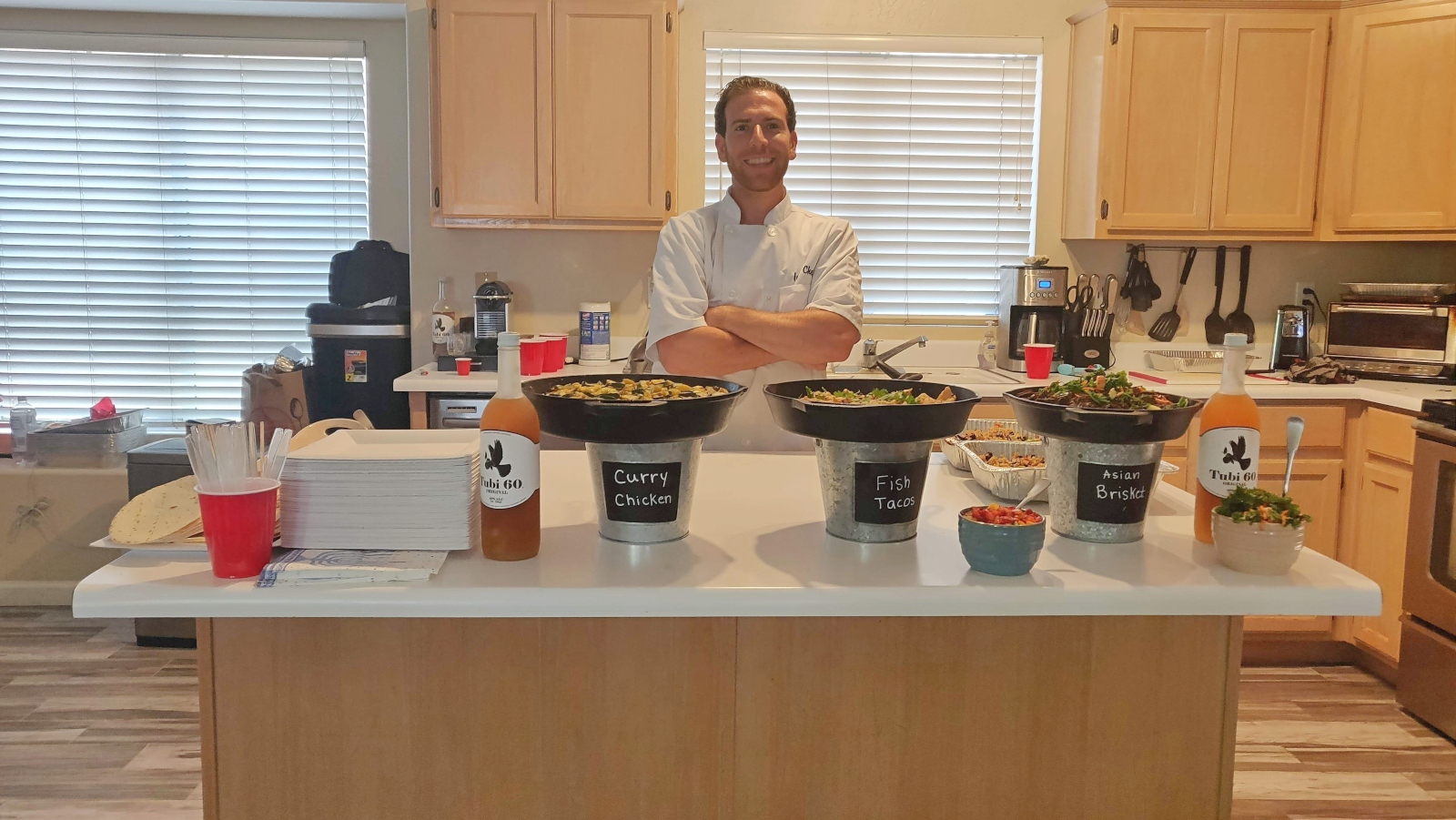 A personal chef made party food to go with Tubi 60 at Evan Hoffman’s house. Photo by Evan Hoffman

But every brand eventually has to grow up to reach its full potential.

He asserts that Tubi60 is less about the money, and more about bringing a positive social experience to as many people as possible.

And although it’s gone global, it isn’t ashamed of its Israeli roots. Bottles are proudly and clearly labeled “Made in Israel.”

The drink was photographed on the Tel Aviv beachfront alongsideIsrael’s most popular snack, Bamba, in an official promotional photoon the brand’s US Instagram page.

Tubi 60 is also frequently photographed by fans next to a favorite mix-in: sabra and pear juice,a green bottled juice by Israeli super brand “Spring” sold on Israeli supermarket shelves alongside other kid-friendly flavors, like strawberry-banana and mango. Afterall, native Israelis are called tzabarim, the Hebrew word for the prickly pear cactus fruit.

Last Israeli Independence Day, a special edition bottle was produced with the Tubi’s logo dove coming out of the Star of David on the Israeli flag.

It’s safe to say that the drink, with its chunky layer of sediment at the bottom, once known only to those in trendy northern Israel circles of 20-somethings, has properly moved on while embodying the Israeli spirit unapologetically.

Now to be found in some of the most unlikely corners of the globe — brought there in an official capacity or by enthusiastic travelers – Tubi 60 is just another thing that one day could be considered as Israeli as Bamba.