At 18, Alex Sánchez came to Israel on Birthright and prayed on the male side of the gender divider at Jerusalem’s Western Wall (Kotel).

At 24, Sánchez came to Israel as a Masa Israel Teaching Fellow and prayed on the female side.

“I’m probably one of the few people who’s had the unique experience of praying on both sides of the Kotel because when I came here the first time it was before I had transitioned,” says Sánchez, speaking from the garden of her home in Rishon LeZion. Alex Sánchez at the Western Wall in Jerusalem. Photo courtesy of Alex Sánchez

“Not many can say that. I tell my other trans friends it’s like our trans privilege,” the 28-year-old English teacher jokes.

How did Sánchez, a Jewish boy from Hamilton, New Jersey, wind up as an Israeli woman who volunteers to help trans and LGBTQ people in the immigration process?

Growing up with a Jewish mother and Mexican father in a heavily Catholic town as “a brown queer person,” Sánchez always stood out from the crowd.

The two Sánchez kids decided to start going to synagogue when they were in high school. “We called ourselves ‘the orphans’ because our parents didn’t go with us. They drove us there and dropped us off,” she explains.

During freshman year at The College of New Jersey, Sánchez went to Israel on a free Birthright trip.

“Too often, trans stories are told through a lens of victimhood and sympathy. I want my story as a trans person to be positive.”

“I really felt this sense of belonging in Israel. And I remember thinking of my ancestors in the shtetl and what it could have meant for them if they had a country like this that would have taken them in — a place to escape the pogroms,” she says.

“I also thought about my aunt who was a staunch Zionist and Jewish rights advocate. She gave me a very big appreciation for Israel because she fought for us to have this kind of future.”

After graduating in 2016, Sánchez began the gender transition process while trying to find a teaching job.

“The interviewers would look at the name on my teaching license and see a different person standing in front of them. And there was an automatic, like, ‘I’ll take you through the paces, but it’s not happening.’”

So she took a job in social work until beginning Masa Israel Teaching Fellows (MITF) in September 2018. 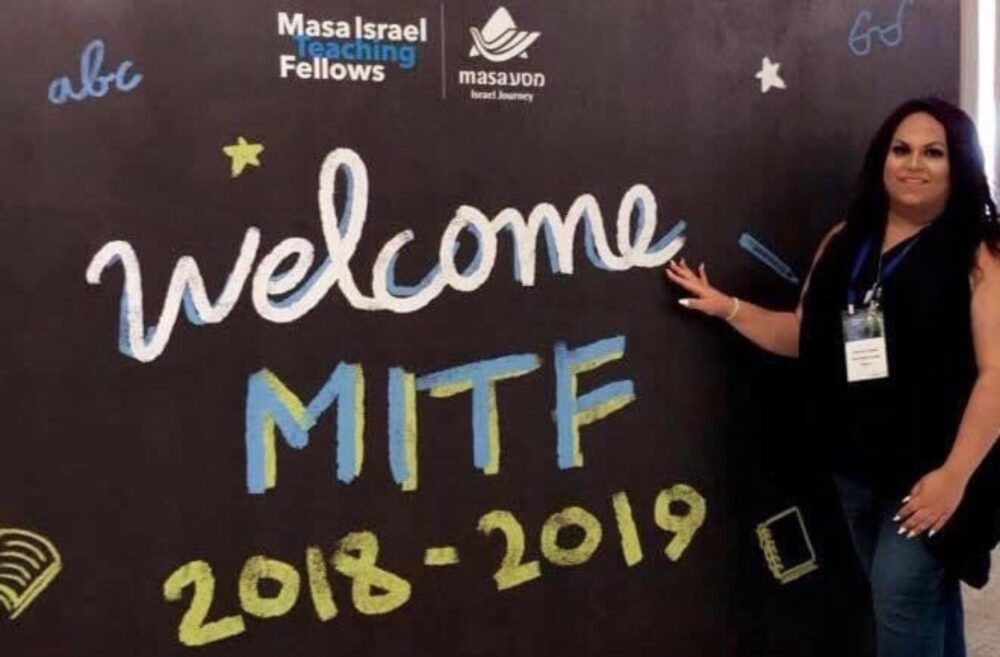 MITF placed Sánchez and several other fellows in Ramla, a blue-collar city with a mixed Arab and Jewish population. It’s not the sort of place you’d expect a trans individual to be welcomed with open arms.

“The expectation is, ‘Oh, you’re going to Ramla and you’re trans. Are you sure about that??’ But the level of acceptance and appreciation and love that I had from my students, from my coworkers and from the parents was so affirming,” she says.

“I was invited to Shabbat dinners and family parties for the holidays. It was such a heartwarming way to be introduced to Israel. And my neighbors as well… there were three different grandmothers fighting for who could have us for Shabbat dinner every week,” she recalls.

A comfortable place to work

“I think people have a big misconception that Israel is a little bit stuck in the past. And possibly not everyone is as welcoming and accepting,” Sánchez says. 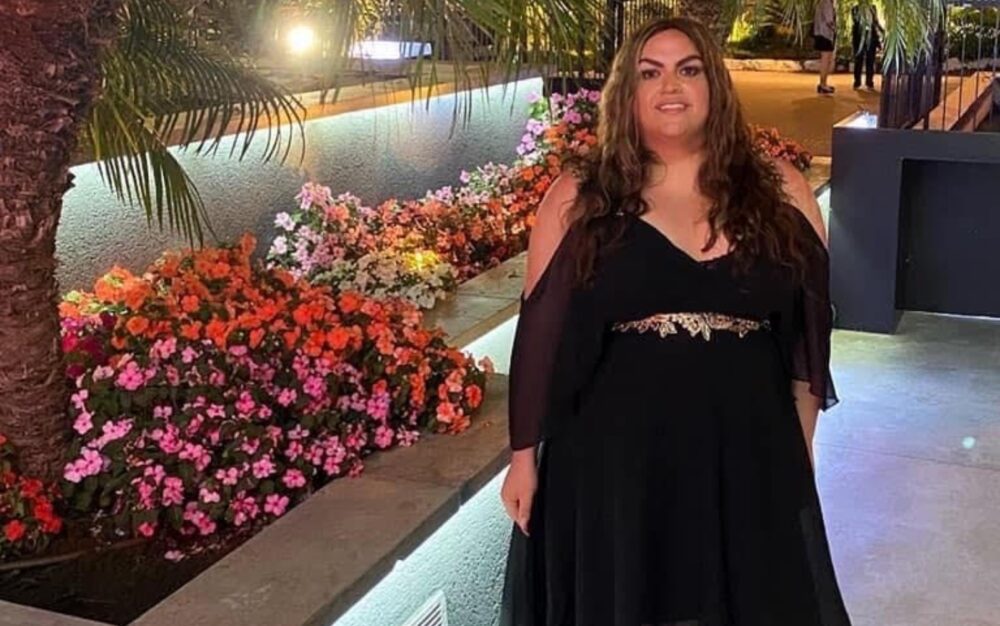 These positive experiences convinced Sánchez to immigrate to Israel and continue teaching English.

After applying for a job she saw advertised on Facebook, she quickly landed an adjunct lecturer position at the College of Management Academic Studies in Rishon LeZion.

It isn’t fulltime, so she also applied at local high schools. English teachers from English-speaking countries are in short supply in Israel, and once again Sánchez landed a job right away – despite being completely upfront with interviewers about her transness.

“I prefer to be open about it because I want to gauge their reaction and see if it’s a place where I’ll be comfortable working,” she explained.

The woman who hired her didn’t understand why gender identity would be an issue. “She gave me a bewildered look and said, ‘You’re an American English teacher. Why would that matter?’

“I think the advantage of being in Israel is that people see you for your utility. And for trans people, the chance to show our utility is something we usually don’t get in other countries,” she says.

“Just being able to have a dignified life and a career is an opportunity that not a lot of trans people get to experience. So I value it. I cherish it.” 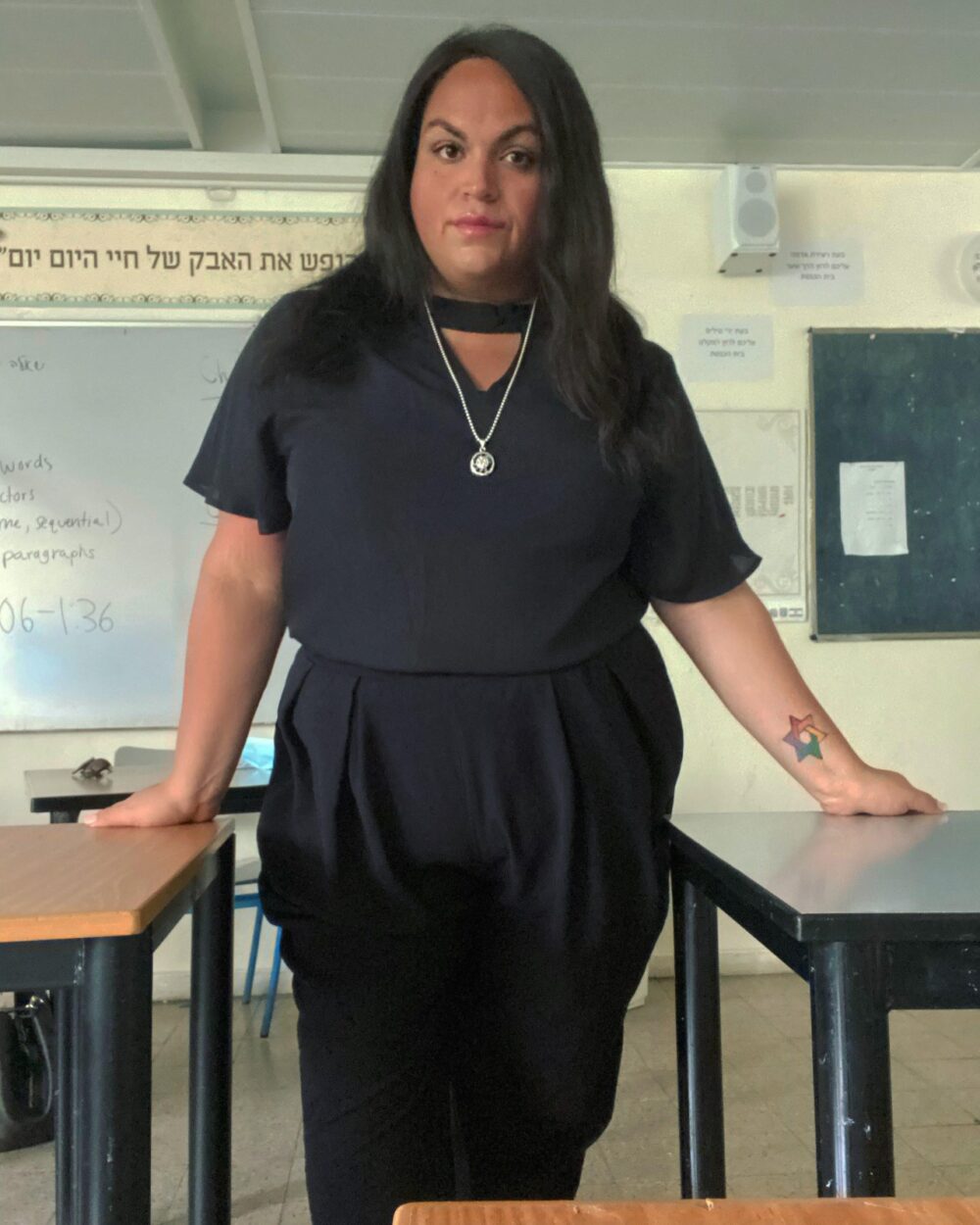 Alex Sánchez in her classroom in Rishon LeZion. Photo courtesy of Alex Sánchez

Sánchez teaches the same kids from 10th through 12th grade. Some of her first group of students, now in the military, come back to visit her.

“It’s kind of a bragging rights thing among Israeli teachers when students come back to visit you in uniform and request to see you at the school gate,” she explains.

“It is a special moment, because when you’re just working, working, working you can’t see so far into the future that product of your labor. And then here comes one of your kids in an Air Force uniform, you just start bawling your eyes out.”

Maybe part of her popularity comes from having a classroom in which students are welcome to discuss any topic (in English, of course) without fear of judgment or agendas.

“High school students should feel comfortable enough to ask questions and receive a fair answer — as long as questions are asked respectfully and in the appropriate context,” she says.

She wants all her students to know she has their back.

“Our role as teachers is to help students on their path no matter how different it is from ours. Our responsibility is to figure out how to best support the kids and what they’re going through.” Sánchez, in turn, is grateful to receive warm support from the woman who hired her.

“As an immigrant, it’s really valuable to have someone in your corner, because when you move to a new country you’re starting over from scratch in terms of your social network, and you have to find your little tribe of people who look out for you.”

Sánchez says that her sister, a married modern Orthodox woman, hopes to move to Israel also – most likely to Jerusalem.

Many people ask Sánchez why she doesn’t live in Tel Aviv, which is considered the LGBTQ capital of the Middle East.

“There’s no appeal to me of living in an overpriced city,” she says, describing herself as an “old-fashioned lady.”

“I like to go to the mall. I like to go out to a nice dinner. There’s nothing I’m missing in Rishon — it’s a big city with great beaches and great restaurants. If I want to go to Tel Aviv, I can take a bus.”

And like other old-fashioned ladies, she isn’t active on social media.

She has, however, been in the news for creating a Masa Israel LGBT handbook, for contributing information about trans healthcare to resources for immigrants, and for addressing the Israeli Knesset at the invitation of Health Minister Nitzan Horowitz (who is gay) on the banning of so-called conversion therapy.

“I understand the value of engaging in public discourse, but I value engaging in private discourse — the one-to-one interactions I get to have every day as an educator,” she says.

“In my opinion, too much emphasis is put on activists and not enough on the people who show up every day and do the work with individuals. They’re the people I look up to and that’s what I try to model my life after.”

Sánchez is studying at Hebrew University for a master’s degree in education with a specialization in Jewish education. She says she is “content and happy” living and working in Israel.

She agreed to be featured on ISRAEL21c only because “too often, trans stories are told through a lens of victimhood and sympathy. I want my story as a trans person to be positive. I’m out here doing the work God put me on this earth to do and I’m happy to do it.”

UNCOVER ISRAEL - Get the ISRAEL21c
Weekly Edition free by email
Sign Up Now!
Bring Israel's story to life.
Millions of people around the world rely on us to gain a deeper understanding of Israel. We are the trusted source for original content you won't find anywhere else.
You can make a difference. Donate today to support journalism that brings Israel’s story alive.
SUPPORT ISRAEL21c
Read more on:   People, Culture, Diversity, Alex Sánchez