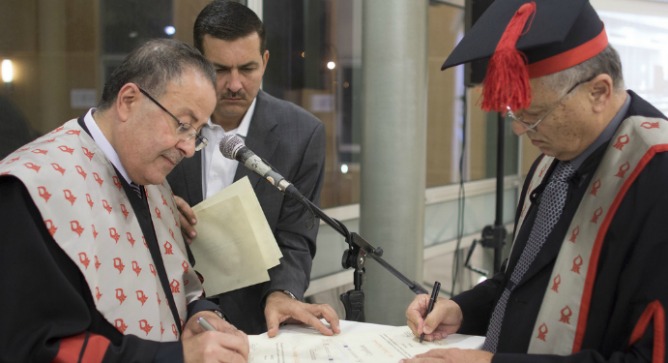 Every graduation ceremony is moving. The recent paramedics commencement at an Israeli university, however, was particularly poignant as the graduating class was an unlikely mix of Jordanian and Israeli students.

Though Israel and Jordan signed a peace treaty in 1994, relations between the countries have been minimal. And this makes the first-ever Jordan-Israel Academic Emergency Medicine Collaboration, at Ben-Gurion University of the Negev (BGU), all the more notable.

The three-year course granted a bachelor’s degree in emergency medicine to 55 students — 14 Jordanians and 40 Israelis. BGU provides the only university-based academic degree for paramedics in the Middle East.

“I would like our graduates to feel very proud to have had their education at this noble, high-ranking and humanitarian university,” said Dr. Mohammed al-Hadid, head of the Jordanian Red Crescent, in his address to the first graduating class.

“Ben-Gurion University is very active in the local communities and plays a central role in development in the fields of industry, agriculture, education and in building relations with its neighbors,” he continued.

Al-Hadid was one of the program’s initiators in collaboration with Prof. James Torczyner, founder and director of the McGill Middle East Program in Civil Society and Peace Building, and former BGU Rector Jimmy Weinblatt (now president of Sapir academic college).

“It was a big success academically, socially and in terms of integration,” Dr. Bruria Adini, program director, tells ISRAEL21c.

In addition to fostering mutual respect, the initiative assures that in the event of a natural disaster in the region, Israel and Jordan will work together to save lives.

Seismologists warn that fault lines along the Syrian-African Rift could cause an earthquake in Israeli and Jordanian cities. That’s why BGU organized the Joint Disaster Management Project as part of the emergency medicine program.

Jordanian and Israeli students, with officials from Magen David Adom (Israel’s Red Cross equivalent) and Jordanian Red Crescent, set up a mock earthquake disaster scene in the middle of the Timna Valley to check regional preparedness among first-responders.

“We’re not going to wait for something to happen,” said al-Hadid. “We have started to do something before it happens and that is get to know each other, know what we are good at, exchange expertise and experience, because then our joint effort will be for saving as many people as we can in case something does happen in this region.”

“It gave us all a great feeling of achievement,” says Adini about the training exercise. She would like to see the program continue and include not only Jordanians and Israelis but also Palestinians, Lebanese, Syrians and Egyptians.

The EMS program was funded by the Israeli Ministry for Regional Cooperation, the Israel Ministry of Foreign Affairs, the European Union and private donors.

“Medicine is the bridge to working together. We’re all people and there’s absolutely no difference between us,” Adini said. “We hope this becomes a regional teamwork [project] so that we can really respond in the most effective way to dealing with potential accidents in region.”

During the first two years of the EMS program, the 14 Jordanian students lived in the dormitories at BGU. In the third year, some of the students returned to Jordanian hospitals while others did their practicum in Israeli hospitals.

While in Beersheva, they took part in campus life, social gatherings and a competency course together with their Israeli peers. The courses were taught in English.

BGU’s long history of working with Arab academics has included a Jordanian-Israeli program to restore the Red Sea’s coral reef; proposed treaties for water conservation and use; enrollment of students from Arab countries in the Albert Katz International School for Desert Studies; and outreach to Bedouins through a range of business, educational and agricultural activities.

BGU awarded al-Hadid an honorary degree for his humanitarian work with the Red Crescent and helping to establish the EMS program.

“All through my life I have been an optimist and a believer in peace and I believe in the impact of humanitarian relations on building bridges of understanding, love and respect between nations. I and my colleagues have chosen the humanitarian path to peace prepared to face all challenges and to overcome hurdles along the way,” said al-Hadid.

Adini said she hopes new funding will be found to continue the academic collaboration.

“I’m sure the Jordanians who have returned are all good ambassadors of the country, of the Israeli population and of BGU, specifically,” says Adini. “Personal acquaintances change [preconceptions]. Peace is made between people. It’s such a good experience and I feel privileged to have been a part of this heart-warming program.”