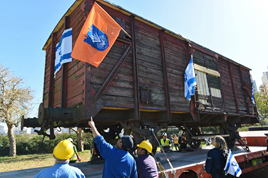 In time for International Holocaust Remembrance Day, an authentic German train car used by the Nazis to transport Jews to the concentration camps was delivered last week to the Israeli city of Netanya. The car will serve as a living monument and educational center in memory of the Jewish victims of the Holocaust. 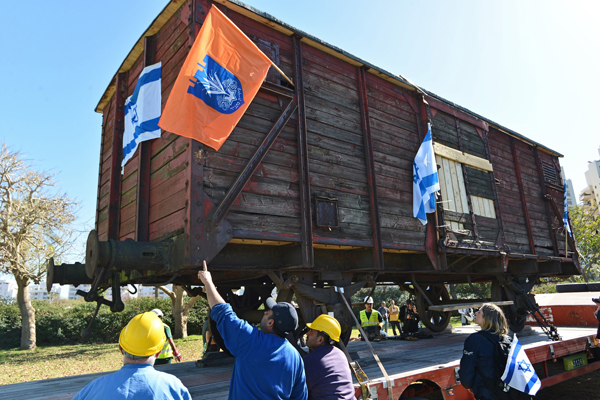 The Nazis used the train cars to transport millions of Jews around Europe to their deaths at the concentration camps. The conditions were generally cramped with over 100 people in each car and lacking event the most minimal conditions such as ventilation, food or water. The journey usually lasted between 24 and 48 hours, and the passengers were quickly removed from the cars and taken to their deaths. Approximately 1.5 million passengers died en route.

The car, known as “Munchen12-246” was found in 2013 by entrepreneur and site preservation expert Roni Dotan. Together with Holocaust commemoration specialist Tatiana Rosa, and Netanya resident Rachel Fridman and through volunteer efforts, Dotan brought the car Israel out of a shared belief that displaying it would strengthen public knowledge and help commemorate the memories of those who perished in the Holocaust.

Netanya Mayor Miriam Feirberg Ikar was also a driving force behind this effort, after hearing from Dotan that a cargo car had been found in Germany. The Mayor, who is strongly committed to commemorating the Holocaust, decided to work actively to bring the car to Netanya as permanent testimony to the obliteration of six million Jews at the hands of the Nazis. 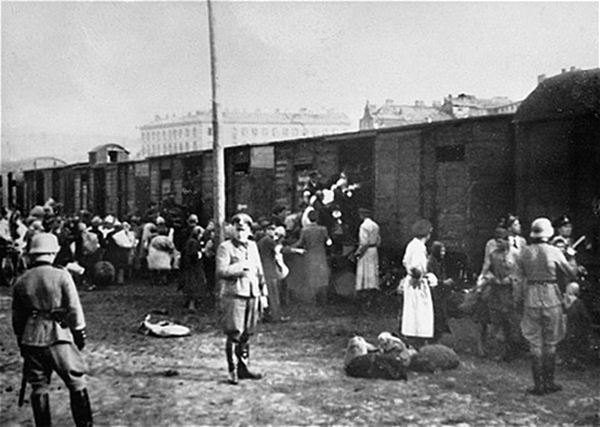 Polish Jews being loaded onto trains at Umschlagplatz in Warsaw Ghetto. (Image courtesy of Wikipedia).

Negotiations between the Israeli and German parties were described by the Netanya municipality press statement as “tough” but in the end successful with an agreement signed about six months ago.

The train car was transported from the Port of Ashdod accompanied by a delegation of dozens of motorcyclists from the Israel Motorcycle Club, the Israel Police and the Netanya municipality.

It has been placed at Netanya’s central memorial site, next to Beit Yad Lebanim – the Memorial to Fallen IDF soldiers from Netanya, the National Memorial for Fallen Ordinance Corps, the Alexandroni Brigade Memorial, the Victory of the Red Army Over Nazi Germany Memorial — which was inaugurated in June of 2012 by Russian President Vladimir Putin — and the Memorial to Victims of Acts of Terror.

At the dedication ceremony last Thursday, Feirberg-Ikar said, “The memorial sites established in Netanya are a moral dictate, and they pay homage to the millions who lost their lives in the Holocaust”

According to the Municipality’s press statement, positioning the car at the end of the  “commemoration path” underscores the connection beween the Holocaust — the decimation of the Jewish communities of Europe — and rebirth through the establshment of the State of Israel.

The car will serve as a living monument and educational center dedicated to the Holocaust that will also display documentation about Netanya residents who survived the Holocaust.

School children will visit the site as will all delegations of Israeli high school students visiting the concentration camps in Poland; continuing education workshops will be held there; and permanent and temporary exhibitions will be displayed.

Extensive information about the car, the processes of transporting the “Jewish shipments” to the crematoria, the modern technologies used by the Germans to implement their “final solution,” testimonies by the car, statements made by survivors and more will all be on display as well.

The train car memorial and educational center is due to be inaugurated in March.