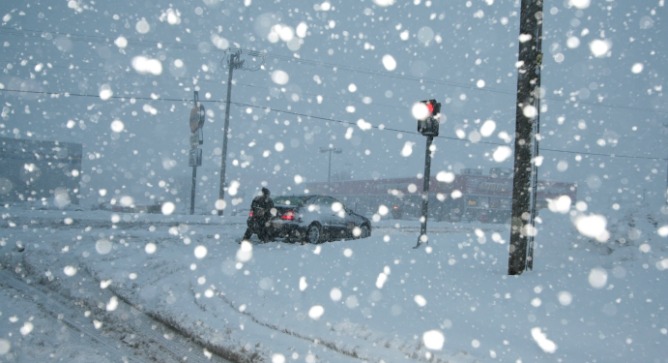 Getting stuck in snow could be a thing of the past. Photo via Shutterstock.*

For any driver who’s ever skidded on ice or gotten mired in mud, Israel Zahavi’s new invention may be just the ticket.

Power Wheel is a removable disc that fits inside the vehicles tires. Inside are twenty metal bars (steel-tipped for off-road vehicles and rubber-tipped for cars to protect asphalt) that can be manually or automatically telescoped out beyond the circumference of the tire to raise the vehicle slightly and grip the road.

When you’re clear of the trouble spot you can then retract the bars into the disc.

You’d need one Power Wheel set for a regular car’s two “active” tires and two sets for a four-wheel-drive vehicle. Before starting on your journey, you could attach them to the permanently installed adapter in your wheel hub. Alternatively, you could keep the discs in your trunk and use them when you encounter slippery or other traction-challenging conditions.

Zahavi tells ISRAEL21c that his idea came out of his personal experiences in the tank corps.

“I saw all the problems involved in getting vehicles out of sand, especially for inexperienced drivers. About five years ago I decided to think about a solution to enhance the mobility of any conventional vehicle over challenging terrain — not just jeeps and Hummers — in conditions such as ice, snow or mud.”

Retiring after 25 years as a mechanical engineer at Rafael Advanced Defense Systems, Zahavi finally found the time two years ago to put his idea into action as he works as an independent consultant from his home in the Galilee.

Can be operated from the dashboard

Zahavi shows a photo of his own car fitted with a prototype of the most basic model of the patent-pending Power Wheel.

“To start, you just have to install an adapter on the active wheel hubs. When you reach a problem area, you take Power Wheel out of the trunk and fit it onto the adapter with stabilizing pins and a central screw. Then you’re ready to rotate the disc clockwise to extend and lock the bars in place. This version has no wires and needs no electricity. It’s purely mechanical.”

Zahavi’s “next generation” model, still in the design stage, will be electronic and fully automatic. It would integrate with a computerized dashboard system that would recognize a loss of traction and automatically activate the Power Wheel — or give the driver the option of activating it with a switch, without leaving the vehicle. After the rough patch, the bars could automatically be contracted back inside the device with or without the switch.

“I finished building all the parts and it’s ready for production,” says Zahavi.

According to market research carried out by his business partner-patent agent, Power Wheel would fill a need particularly in Canada and in the northern United States, where ice and snow are common driving hazards.

He notes that snow tires are expensive and not foolproof in extreme conditions, while tire chains are difficult to use and can damage road surfaces.

“Within three years, our device could change the whole picture,” Zahavi predicts. “This device has long life, with no maintenance required, and you have it in your garage ready to go. It also has military uses, and could be used on privately owned 4x4s and trucks.”

Two years ago, he sent his basic idea to American marketing and licensing experts Lambert & Lambert, which evaluated the invention for 16 criteria including societal influence, performance and profitability. It scored 86 out of 107 at the time, but Zahavi has since refined the design and is confident that a second evaluation will award full points to the potential product.

The main obstacle in the road now is financial. “We are looking for someone to invest in the idea or buy it as is,” says Zahavi, who is seeking a modest $200,000 to construct the advanced prototype and register the patents.

He estimates that the retail cost for a pair of Power Wheel devices would be about $1,500.

UNCOVER ISRAEL - Get the ISRAEL21c
Weekly Edition free by email
Sign Up Now!
Bring Israel's story to life.
Millions of people around the world rely on us to gain a deeper understanding of Israel. We are the trusted source for original content you won't find anywhere else.
You can make a difference. Donate today to support journalism that brings Israel’s story alive.
SUPPORT ISRAEL21c
Read more on:   Gadgets, Technology, driving safety, Power Wheel