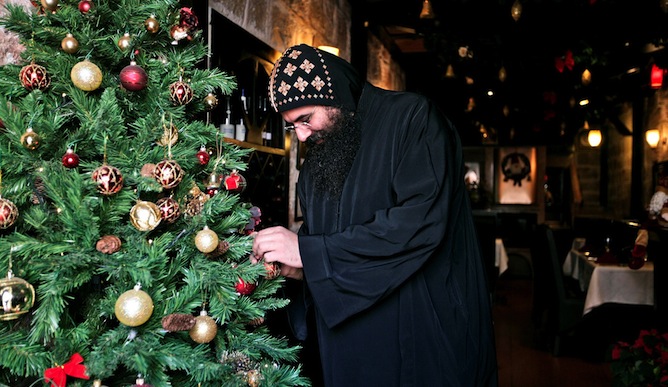 A Christmas tree in the Old City of Jerusalem. Photo by Flash90

A record two million Christian tourists are expected to visit the Holy Land by the end of 2013, according to the Israeli Tourism Ministry. And over Christmas alone, some 75,000 visitors will arrive for the holiday period, 25,000 of them pilgrims.
Although there is no white Christmas in Israel as balmy temperatures continue often through December, and most of the population is also at work, there are still ample events and religious sites to choose from.

ISRAEL21c presents the top 10 ways to celebrate Christmas in the Holy Land: 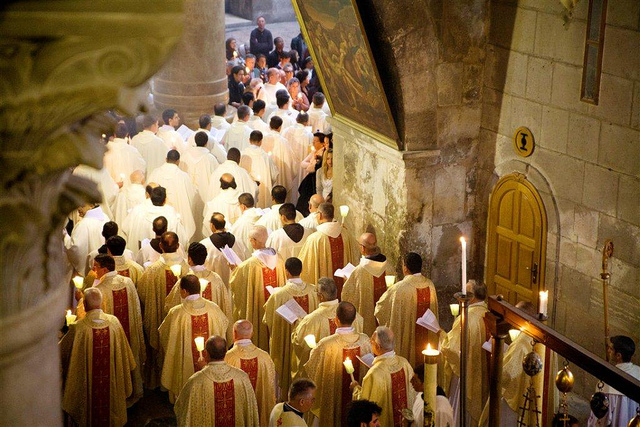 Mass at the Church of the Holy Sepulcher. Photo by Noam Chen

Join one of the dozens of Christmas prayer services taking place in Jerusalem, Bethlehem, Nazareth, Tel Aviv-Jaffa, Beersheva and Haifa. Midnight Mass in the Basilica of the Nativity in Bethlehem is by far the most popular and requires pre-booking.

At the Abbey of the Dormition on Mount Zion in Jerusalem, there’s a Christmas party followed by a liturgy with typical German hymns such as “Silent Night” at midnight, followed by a community walk to Bethlehem at 2:30am. Get there early to beat the crowds.

Other significant Israeli churches include the Church of the Annunciation in Nazareth, St. Anthony’s Catholic Church in Jaffa, Stella Maris Carmelite Monastery in Haifa and Saint Peter’s Church in Tiberias. Many churches hold a traditional procession to the Nativity Grotto on Christmas Eve.

2. Join the Patriarchal procession to the Grotto 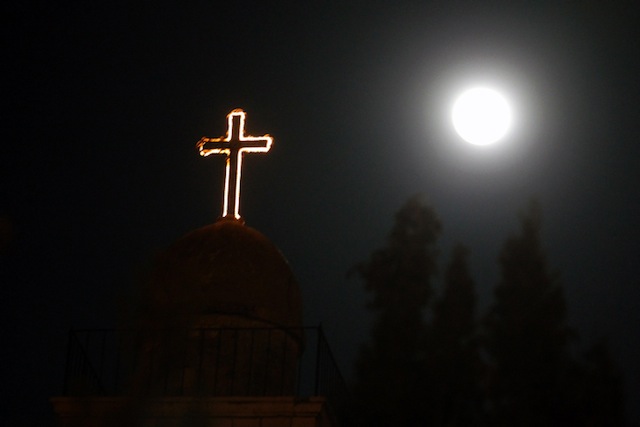 The Patriarchal procession leaves from the Old City in Jerusalem on December 24 and makes its way to the Mar Elias Monastery and then the Church of Nativity in Bethlehem. 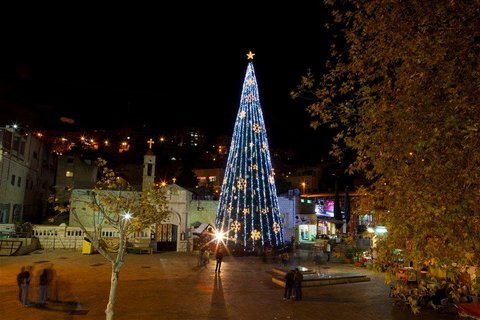 The three biggest Christmas trees in Israel can be found in Haifa, Jaffa and Nazareth. But if you have room for a tree of your own, contact Keren Kayemeth LeIsrael-Jewish National Fund. The KKL-JNF distributes Arizona cypresses for Christmas to local churches, monasteries, convents, embassies, foreign journalists and the general public. This year, KKL-JNF launched a “green” service offering free Christmas and New Year e-greeting cards online. 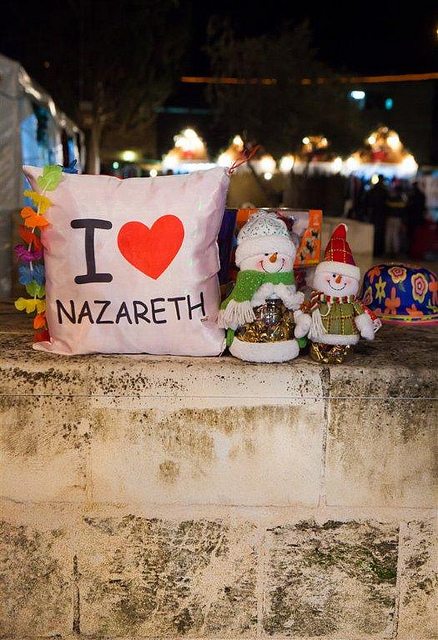 The best place to find Santa figures, flashing lights, homemade goodies and tree decorations is the Nazareth Christmas Market (December 11-15, 2013). The four-day event packs a great holiday vibe. After all, Nazareth has the largest Christian community in Israel. If you do miss it, you can always stock up on holiday decorations in Jerusalem’s Old City Christian Quarter, on Matalon Street in Tel Aviv or in the Wadi Nisnas neighborhood in Haifa.

Thousands of local youth, community leaders and priests take part in the traditional Christmas Eve parade in Nazareth. Jostle for a good spot along the city’s street from 3pm on December 24, to watch the marchers make their way to the Basilica of the Annunciation. This is the official opening of festive Christmas celebrations in Israel. Beautiful fireworks always cap the event.

6. Get baptized in the Jordan River 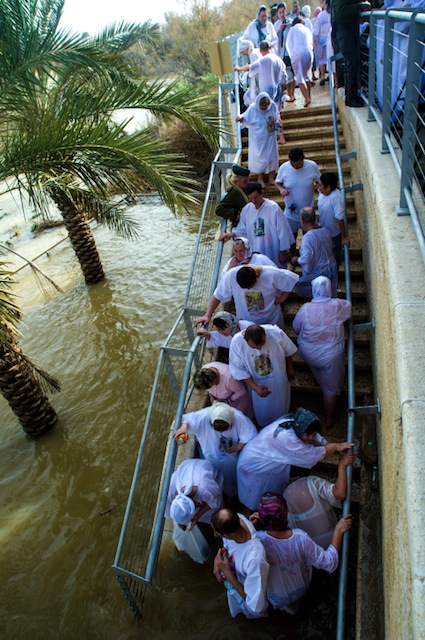 Make your visit to the Holy Land even more memorable with a baptismal ceremony at the Jordan River. The Yardenit Sacred Site and the Qasr al Yahud Baptism Site are open year round. According to Christian tradition, Jesus was baptized by Matthew near Qasr al Yahud, while John the Baptist baptized Jesus near Yardenit.

7. Go to a liturgical concert 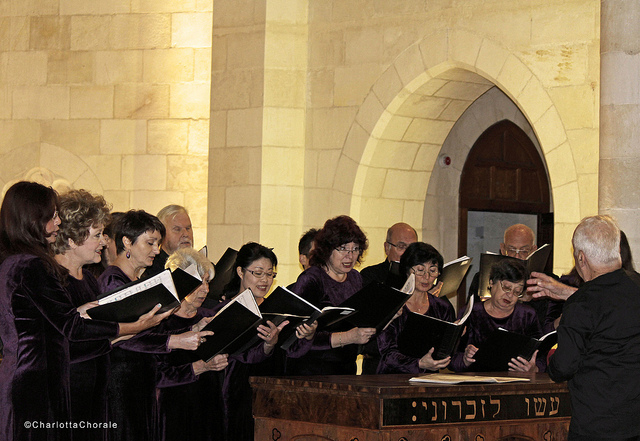 The annual Christmas Concert in Christ Church in Jerusalem’s Old City is always a hot ticket. This year’s Hallelujah concert will take place on December 27 at 10:30am at the church, located across the road from the Tower of David. The Charlotta Chorale of Tel Aviv Choir will perform. Reservations: *2884.

The Christmas Eve concert at the YMCA in Jerusalem on December 24 at 7pm will feature Schubert, Mozart and Debussy, along with the traditional carol sing-along with the audience. Performers on the bill include the Jerusalem A Cappella Singers, the Jerusalem Oratorio Chamber Choir, and the Jerusalem International YMCA Palestinian and Israeli Youth Chorus.

8. Dine at a Christmas banquet

Just because you’re not at home doesn’t mean you need to miss out on the traditional Christmas meal. If you’re looking for a fun festive meal, Mike’s Place in Tel Aviv, Herzliya and Eilat should be your destination. The bar-eatery-music venue chain kicked off its Christmas dinner tradition back in 2001. Reservations are preferred. The four-course meal costs $36 including a glass of wine.

A swankier option is the traditional five-course feast at Jerusalem’s American Colony Hotel. You do not have to be a guest at the hotel to celebrate the best of local cuisine in time-honored holiday dishes. Reservations are a must. The meal costs $114 per person.

9. Party at the Holiday of Holidays 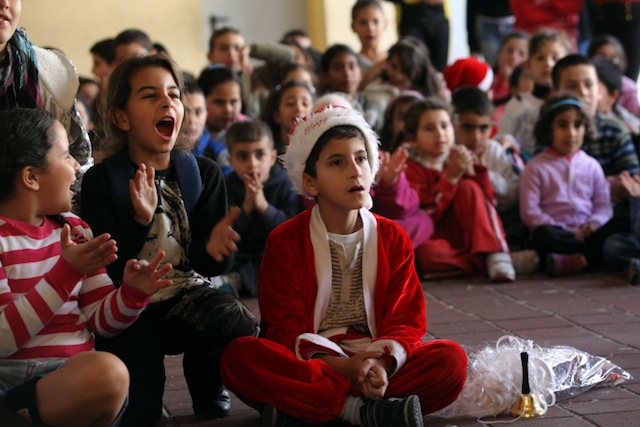 December is the month to be in Haifa as the annual Holiday of Holidays festival runs every weekend. That Hanukkah came early this year is of no consequence; this multicultural event always celebrates three holidays rolled into one – Christmas, Hanukkah and Eid-Al-Adha. Jingle bells with Santa, take in the latest in art, listen to liturgical music, enjoy a children’s puppet show, or just roam the alleys of the Wadi Nisnas neighborhood. There is something for everyone at this event.

Travel agencies and churches have put together Christmas tour packages to help you maximize your visit to the Holy Land. Stops include the Shepherds’ Field, the Church of the Nativity, the Milk Grotto, Manger Square, Church of the Holy Sepulcher, Garden of Gethsemane, Stations of the Cross on the Via Dolorosa, and the Sea of Galilee.

Check out ISRAEL21c’s Ultimate Guide to Christmas in the Holy Land: (https://www.israel21c.org/travel/the-ultimate-guide-to-christmas-in-the-holy-land/.

UNCOVER ISRAEL - Get the ISRAEL21c
Weekly Edition free by email
Sign Up Now!
Bring Israel's story to life.
Millions of people around the world rely on us to gain a deeper understanding of Israel. We are the trusted source for original content you won't find anywhere else.
You can make a difference. Donate today to support journalism that brings Israel’s story alive.
SUPPORT ISRAEL21c
Read more on:   baptism, Holy Land, holiday, Bethlehem, Travel, Experience Israel, See Israel, Jerusalem, Sea of Galilee, Israel, Holidays, Christmas in Israel, Israeli food and drink, Churches in Israel