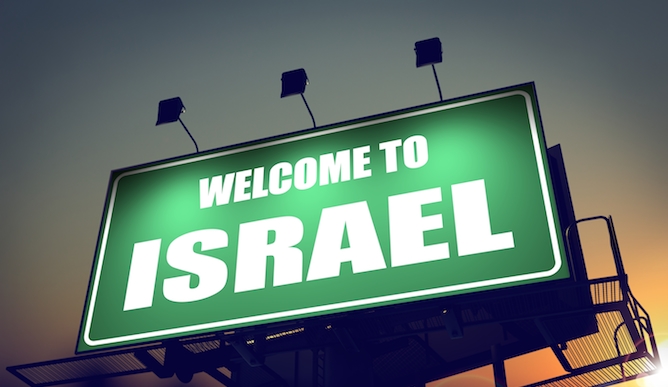 Israeli apps can help you make the most out of a trip to Israel. Image via www.shutterstock.com

Now is the time to jump on the bandwagon as record-breaking numbers of tourists are entering Israel — 776,000 people in the first three months of 2014, three percent more than the same period in 2013.

Touring Israel on a budget? Download some of these awesome applications to your smartphone to get the most out of your trip.

You don’t need to hire a guide or even access the Internet to take advantage of professional guides’ expertise when you use the iOS and Android Israel App: GPS Digital Travel Guide. Hailed as a tourism game-changer, it provides audio explanations and links to articles and photos of hundreds of popular tourist sites and off-the-beaten-track destinations. Choose from dozens of walking tours or let the app figure out where you’re standing based on GPS tracking. Get directions, search destinations and make hotel and rental car reservations.

This iOS app features six different modules: attractions, map, POI (points of interest) search, translator and world clock. You can find information on attractions, museums, beaches, restaurants, bars, hotels, landmarks and shopping destinations with ratings, reviews, image galleries and daily updates. The POI search also acts as a guide to finding the directions from one place to another via GPS.

Chronus develops location-based, augmented reality Android and iPhone apps for cities and heritage sites, allowing visitors to experience and explore significant tourist attractions as they were in historical times. It added Tel Aviv to its roster last summer. The web interface lets travelers upload tours and stories via a social plug-in. 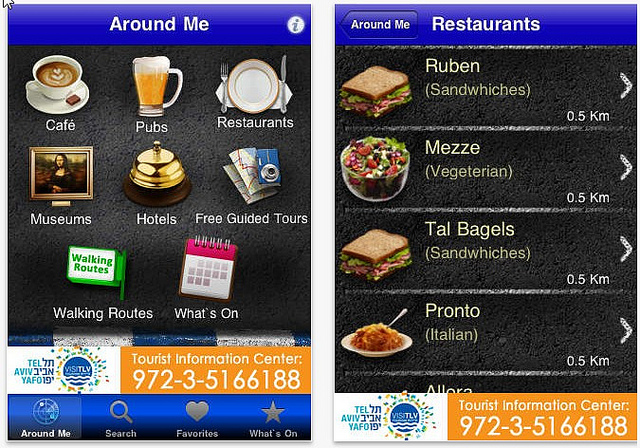 Screen shot of the VISITLV app

This iOS app from the municipality gives you images and descriptions of Tel Aviv-Jaffa’s most popular attractions, including museums, walking tours, restaurants and bars, sights and hotels.

The Jerusalem Development Authority made this free app for the “independent tourist,” and it makes good sense because the Old City of Jerusalem is a “must see” stop on any Israeli vacation – yet its vast web of alleyways is awfully confusing. Fifteen different GPS-navigated tours (five of them wheelchair accessible and all with an audio transcript for users with hearing impairment) explore houses of worship, marketplaces, eateries, the Temple Mount compound, the Western Wall, the Garden Tomb and other iconic locations. Available for iPhone, iPad, iPod Touch and Android devices.

The Tour Haifa application matches places of interest to your location in town, allows you to save favorites and supplies useful information about opening hours and other details. Through 2eat, it also provides phone numbers of restaurants, cafés and pubs in the “capital of the North.”

This iOS app presents several self-guided walking tours with detailed route maps and navigation features to get from one site to the next. Included are six museums, the Bat Galim neighborhood, the Bahá’í World Center, nightlife, shopping, architecture and the Ein Hod artists’ colony a short distance from the city.

The Israeli company Espro Acoustiguide makes many of the audio guides in use at museums and tourist sites across the world. It also offers many touring apps. Download its English-language Masada tour iPhone app directly from the website.