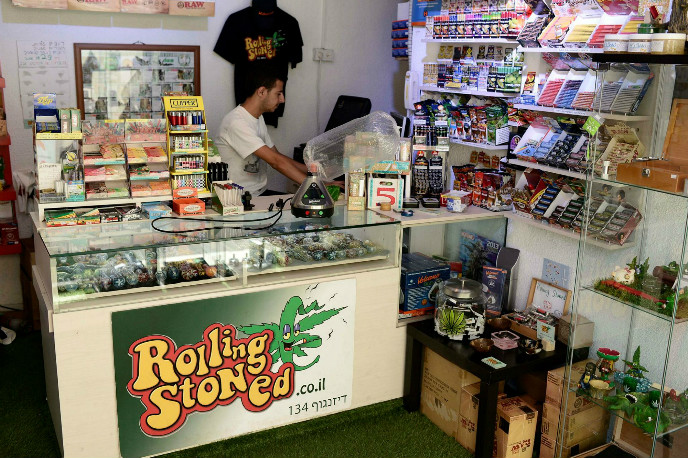 Photo from a cannabis shop in Tel Aviv by Tomer Neuberg/FLASH90.

Photo from a cannabis shop in Tel Aviv by Tomer Neuberg/FLASH90.

As scientists and patients discover the pain-relief and healing properties of cannabis, more governments are legalizing the distribution of medical marijuana by prescription. Yet physicians remain uneasy about the way it’s administered (rolled up in smoking paper or dropped into a vaporizer) and the inability to measure exact dosages.

A two-year-old Israeli-American company, Cannabics Pharmaceuticals, says it has a revolutionary technology to put the medicinal compounds of cannabis into a sustained-release capsule in standardized doses.

Cannabics SR, the company’s flagship product, is designed as a palliative pain treatment for cancer patients. In observational studies, it provided 10 to 12 hours of steady beneficial therapeutic effects. Clinical trials at a major Israeli medical center are planned this year to test its safety and efficacy.

Because Cannabics SR can be classified as a cannabis-infused edible (a more sophisticated take on “pot brownies” and lozenges) for which a regulatory path already exists, no lengthy regulatory red tape is anticipated.

In fact, Cannabics recently signed two distribution agreements — one in Spain and another in Colorado, one of 23 states in the United States where medical marijuana is legalized.

Zohar Koren, one of the founders, explains to ISRAEL21c that he and his two partners set out to define the unmet needs in the medical cannabis market and devise a solution.

“For so many years, this plant has been totally banned by authorities and regarded as devoid of medicinal properties, which is kind of absurd because its beneficial effects for cancer and pain and other conditions have been known since the 1960s,” says Koren, who holds a PhD from the University of Haifa in computational biology and spent seven years developing pharmaceuticals at other Israeli startups.

Israel, however, has taken an international lead in the study of medical cannabis, and one Israeli company recently developed a device that provides metered doses of vaporized cannabis granules.

“After interviewing a lot of researchers, physicians and patients here, we saw that the most urgent unmet need is for a better oral administration route,” says Koren.

“The second need is standardization and reproducibility of the dosage; and the third is prolonged-release administration so the patient could have a whole-day effect from a single administration. With smoking or vaporizing, they need to re-dose every few hours.”

A sustained-release capsule seemed the best way to cover all these bases. Koren says Cannabics’ technology is the first in the world to make such a formulation possible.

“Many medications are available in sustained-release form but never for cannabis because it was never regarded as a pharmaceutical,” Koren says.

He notes that a few other oral medical cannabis products are under development or already in the market, such as Dixie Scrips, Idrasil and Tetralabs Gold Caps. “The main difference between Cannabics SR and all other products is our sophisticated sustained-release formulation that allows for 10- to 12-hours beneficial effects within the therapeutic window upon a single administration.”

Still outlawed in the US

Cannabics does not sell a product, but rather licenses its technology to pharmaceutical manufacturers. However, future plans are to develop novel medicines based on THC and other cannabinoid extracts.

“The main challenge is to develop a good formulation because these substances are highly lipophilic, meaning they dissolve in oil and not water,” says Koren. “So we went to the lab and tested all sorts of formulations, keeping in mind that it should be based only on natural food-grade ingredients.”

The other partners in Cannabics are Eyal Ballan, a neurophysiology PhD who previously developed a resonating neuro-feedback system and helped develop a treatment for non-small-cell lung cancer; and environmentalist Itamar Borochov, an entrepreneur with experience in medical cannabis and organic agriculture.

The publicly traded company is based on Bethesda, Maryland, and maintains an R&D lab in Caesarea  on Israel’s northern Mediterranean coast.

As Cannabics builds its patent-pending IP and gears up to market in Israel, the United States and Europe, US scientists have been approaching the company about using its lab for cannabis research that is still outlawed in their home country.

As for Cannabics SR, he says, “This is just the first step, to put one product on the shelf to start making revenue. The real purpose we’re here for is to research and develop novel therapeutics for debilitating ailments like cancer and inflammatory bowel disease where there is evidence that cannabis can have significant effects, but nobody knows how to exploit those properties yet.”

UNCOVER ISRAEL - Get the ISRAEL21c
Weekly Edition free by email
Sign Up Now!
Bring Israel's story to life.
Millions of people around the world rely on us to gain a deeper understanding of Israel. We are the trusted source for original content you won't find anywhere else.
You can make a difference. Donate today to support journalism that brings Israel’s story alive.
SUPPORT ISRAEL21c
Read more on:   Cannabinoids, Biotech, Health, medical marijuana, Cannabis, Cannabics Pharmaeuticals