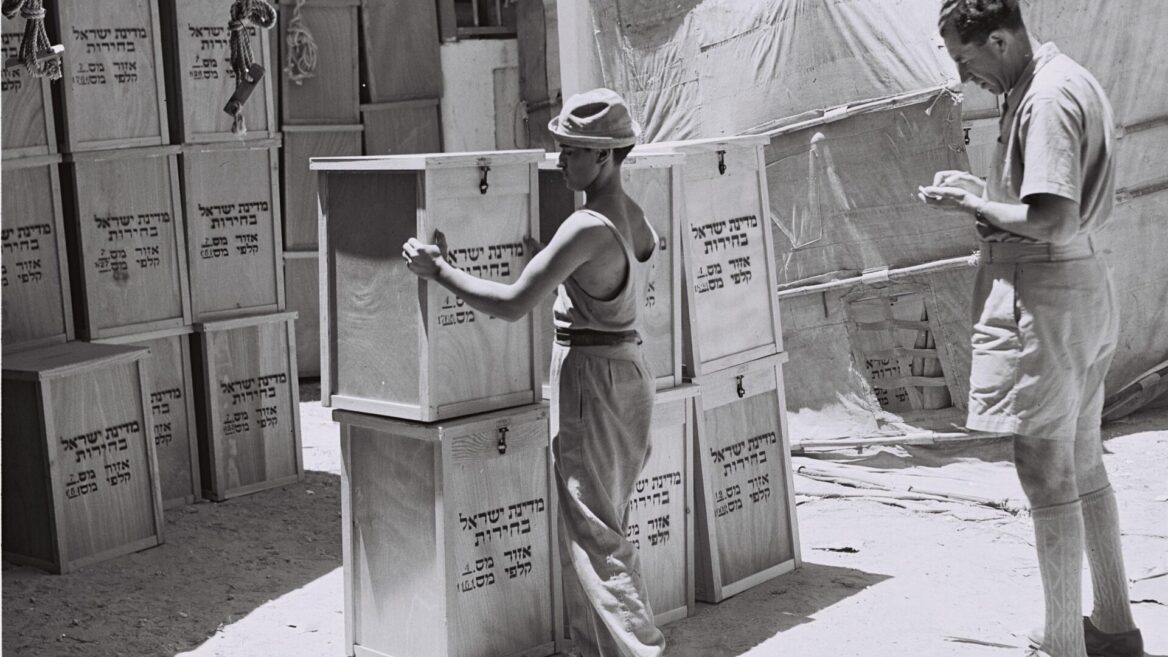 The sturdy but heavy wooden ballot boxes used in the 1951 Knesset elections continued in use for over twenty years. Courtesy of GPO

Israel will hold the third round of elections in the span of a year on March 2nd, 2020, one week before the Purim holiday.

In what can only be described as an unintended yet ironic coincidence or perhaps out of an innate sense of sarcastic Jewish humor, Purim gets its name from the word “pur” or “lottery”. It turns out that some of the same companies which manufacture the kits used in our election process – consisting of ballot boxes, chits, envelopes and privacy screens – also supply lottery equipment. It makes sense, but who knew?

Over seven decades, the physical layout of the Israeli polling station has stayed more or less the same. What has changed is the size, shape and type of materials used in our ballot boxes.

Ballot boxes are defined as“A temporarily sealed container… with a narrow slot in the top sufficient to accept a ballot paper in an election but which prevents anyone from accessing the votes cast until the close of the voting period.” Taking pride in the new State of Israel’s democratic process, official government photographers were dispatched to document the construction of sturdy wooden ballot boxes to be used in the 1951 Knesset elections. The name and number of each polling station was painstakingly lettered by hand on each box.

Secured with rope and lock, the wooden ballot boxes became a backdrop to the now photographic cliché of politicians casting their vote at the polling stations. 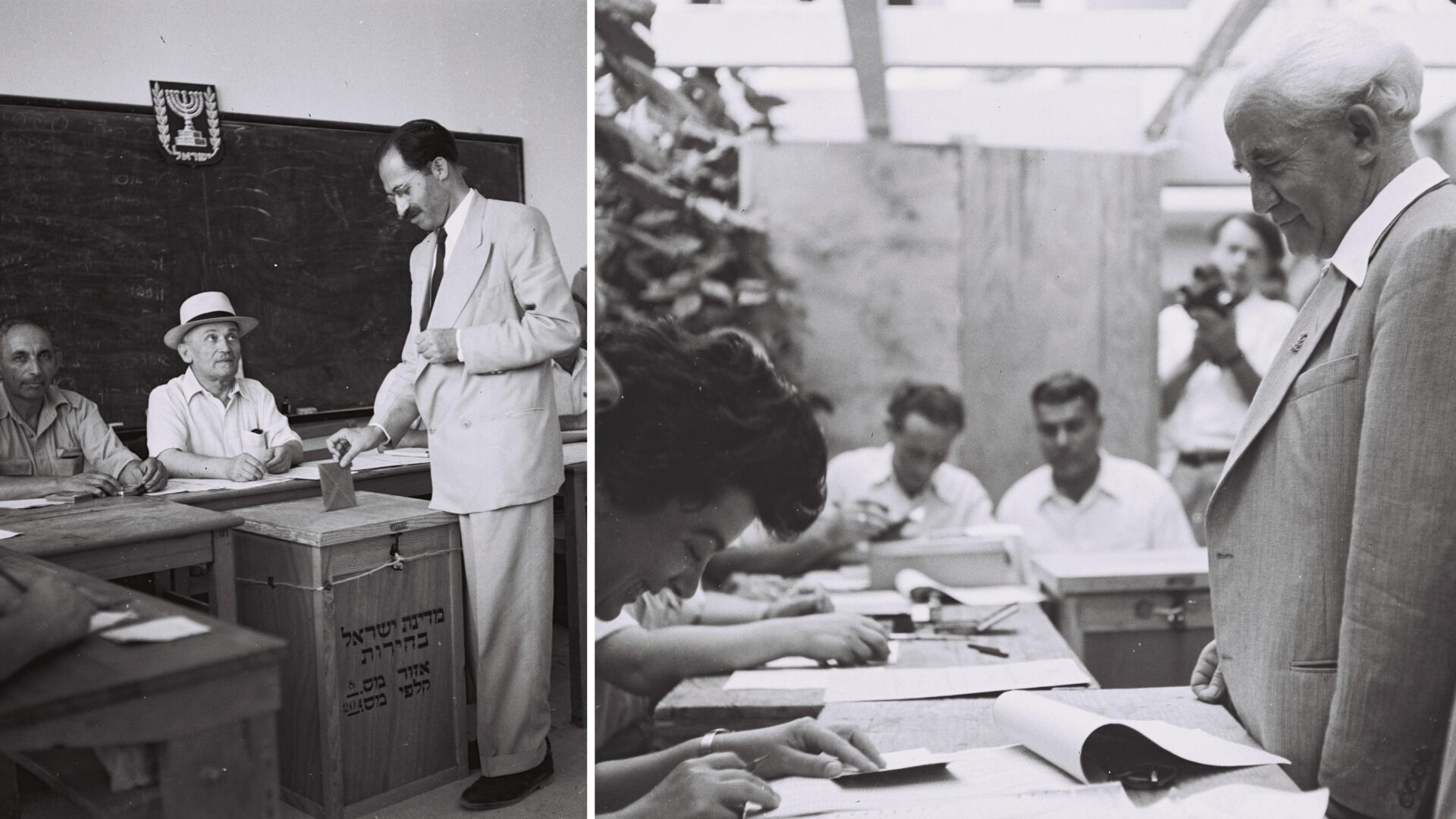 Polling stations would be set up in kibbutzim, religious Jewish and Arab communities – all with the same wooden box. 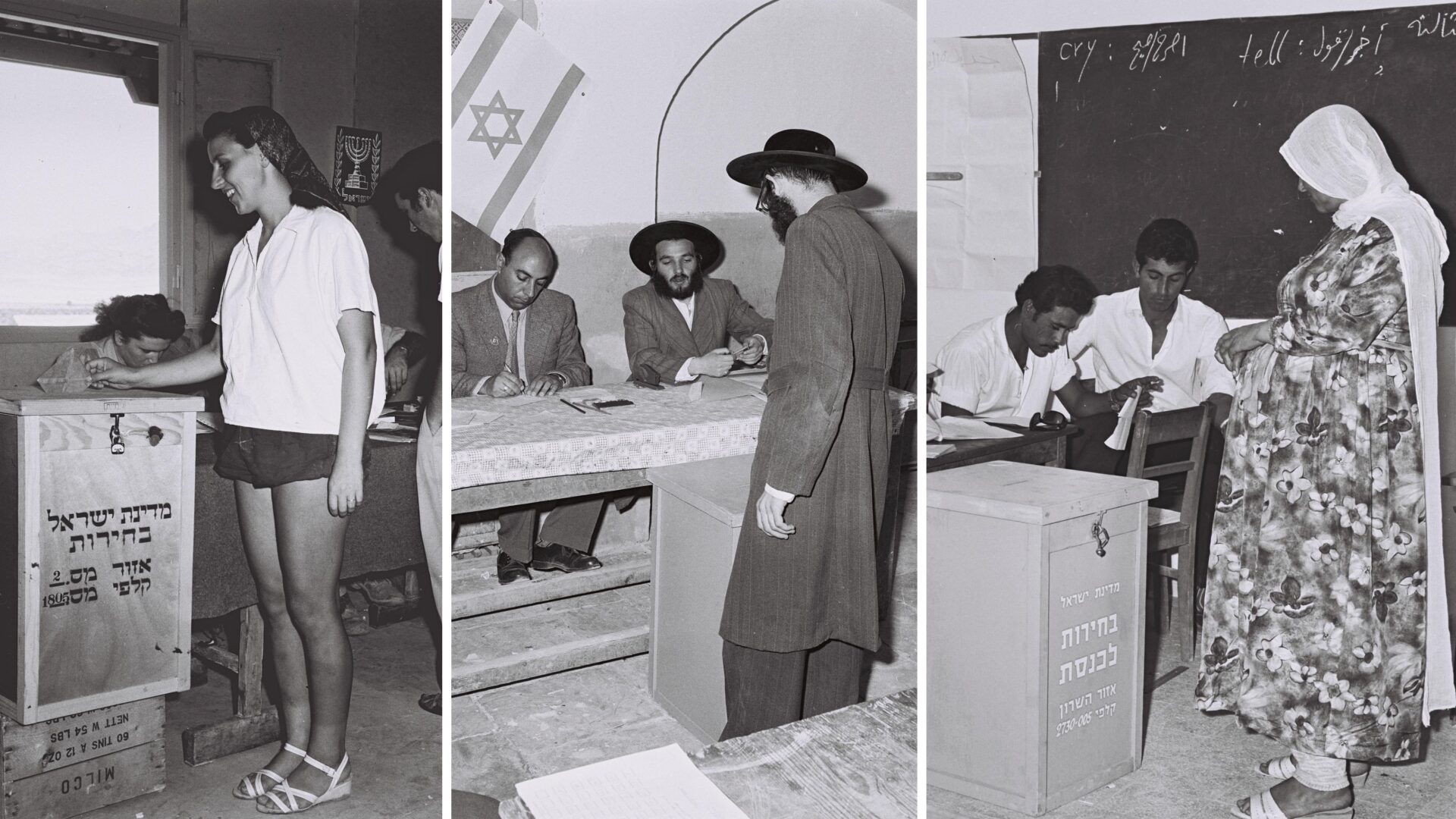 But clearly, wood boxes had their day. In 1959, Minister of Foreign Affairs Golda Meir was photographed at her Jerusalem polling station, placing her ballot into a well-worn wooden box. By 1973, at the Jerusalem municipal elections, Prime Minister Meir was now slipping her envelope into a shiny plastic container. New materials came into use. In preparation for the 1969 Knesset elections, government photographers documented the special metal ballot boxes constructed for Israel’s merchant marine. Even sturdier plastics were put into use in the 1980s. Metal ballot boxes were constructed especially for Israel’s merchant marine in 1969. Even sturdier plastics were put into use in the 1980s. Photo courtesy GPO

In the early 1990s, perhaps in acknowledgment of their back-breaking heaviness or possibly in response to complaints from polling station personnel, lightweight polycarbonate and paper-covered cardboard ballot boxes began to appear. 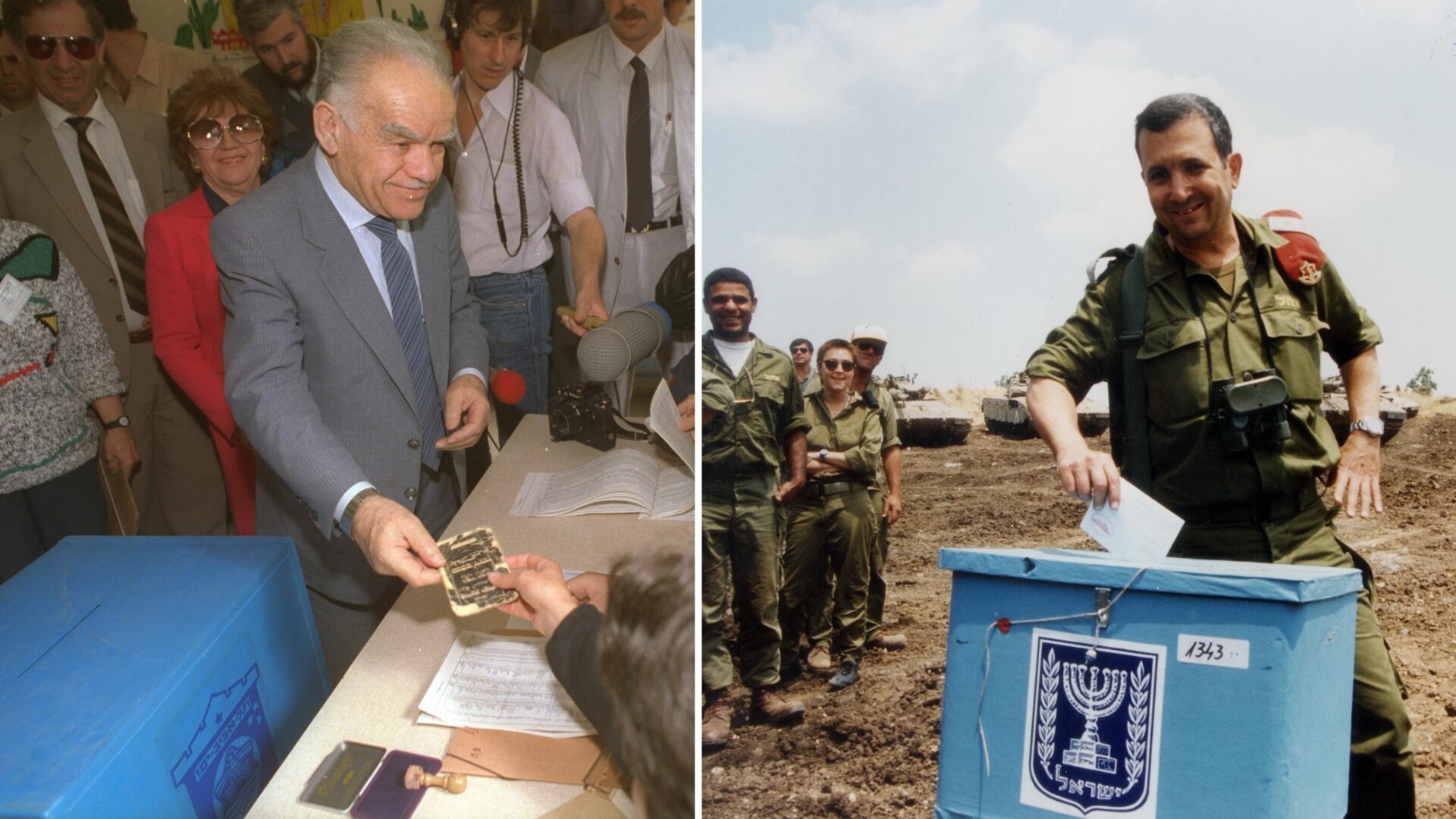 And finally, in the early 2000s, the corrugated blue cardboard ballot boxes still in use today. 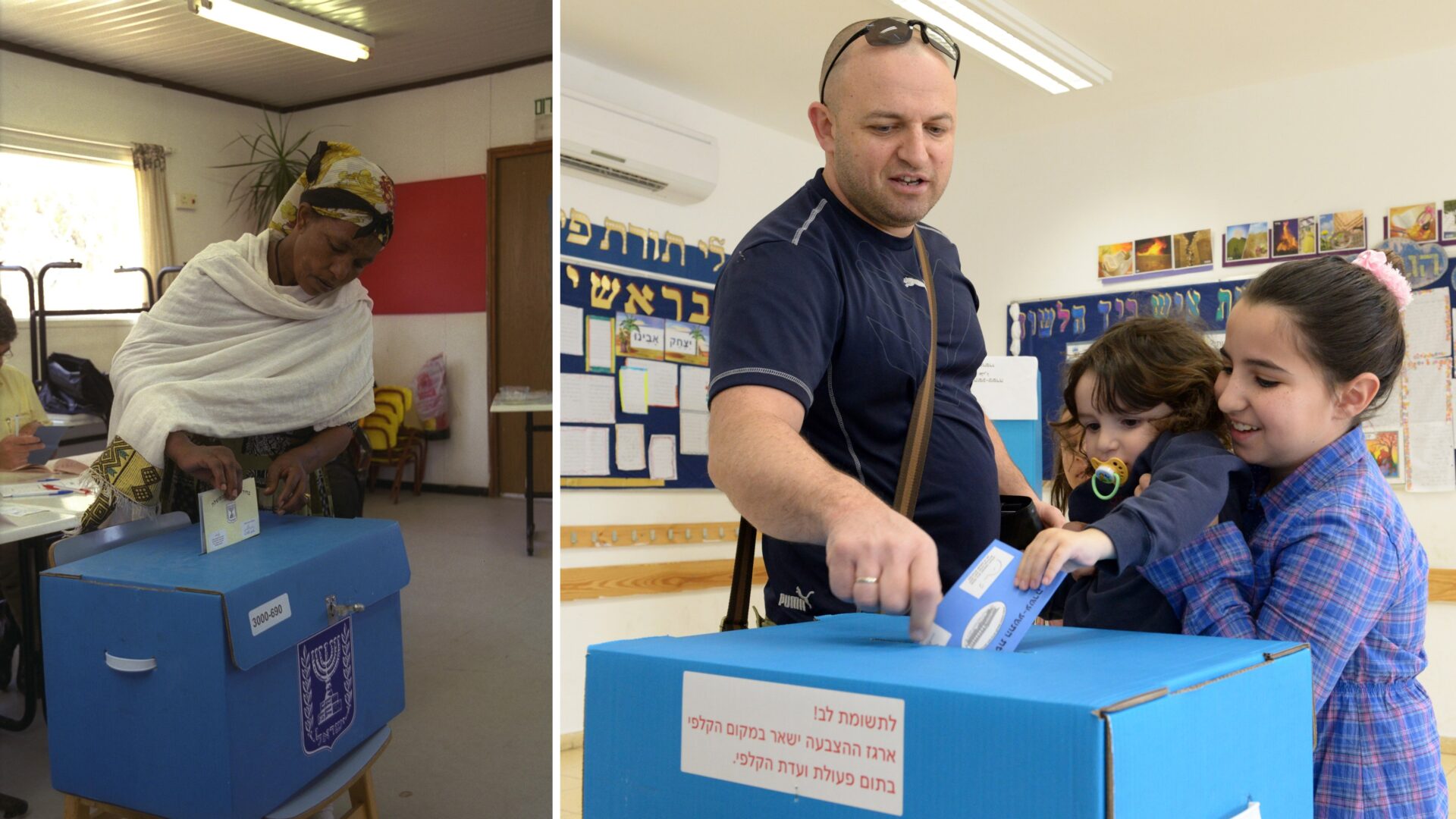 A word about the amount of paper used in each election. In a recent blog post, Jerusalem-based print house Text Ratz calculated that in the 21st Knesset elections of April 2019, each polling station used 1.92 tons of paper for ballots, 9.2 tons for envelopes, and 4.5 tons for the cardboard trays and privacy screens.

On one hand, that’s a lot of trees. On the other hand, although far from perfect, this old-fashioned method may be more secure than current electronic voting methods which are still vulnerable to meddling on a mass scale.

So, while Israel’s low-tech method isn’t tamper-proof, it has some advantages – not to mention, generating one of the all-time favorite Israeli movie scenes in Ephraim Kishon’s 1961 classic Sallah.