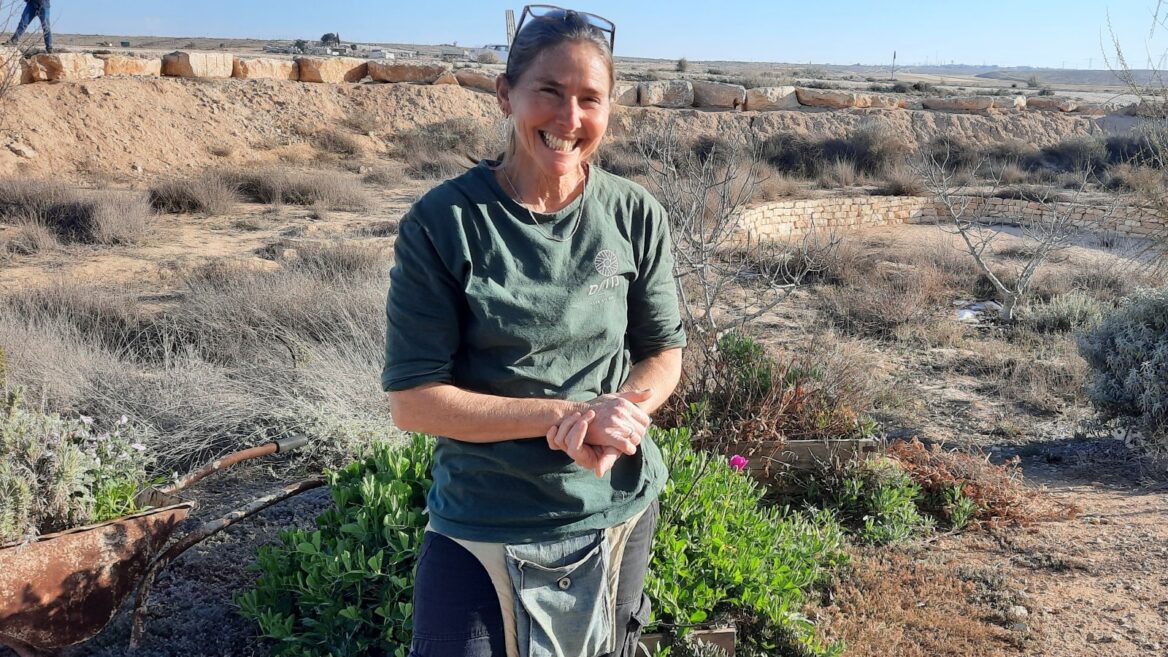 Not far from Yeruham, at Ruhot Junction in southern Israel, you will find Eshkolot Farm, founded in 2009 by Simcha and Roni Marom.

They moved to this area near Mitzpeh Ramon following Roni’s retirement from the army, and established their farm based on biblical agriculture.

They were able to lease the land from the Israel Land Authority with a renewable 25-year contract through a program aimed at building ecotourism in the area, Simcha said.

The dream began as Roni’s, who spent part of his childhood working in agriculture with his father in the Western Negev.

After Roni was elected mayor of Mitzpeh Ramon in 2013, taking on a more than full-time public role, Simcha—a former physical education teacher turned farmer—decided to continue with the project.

Simcha runs the farm in keeping with Jewish laws of agriculture particular to the land of Israel.

She made it her own by including a strong educational component, using more environmentally sustainable growing methods with no chemicals or artificial pesticides, and letting the wildflowers grow freely. 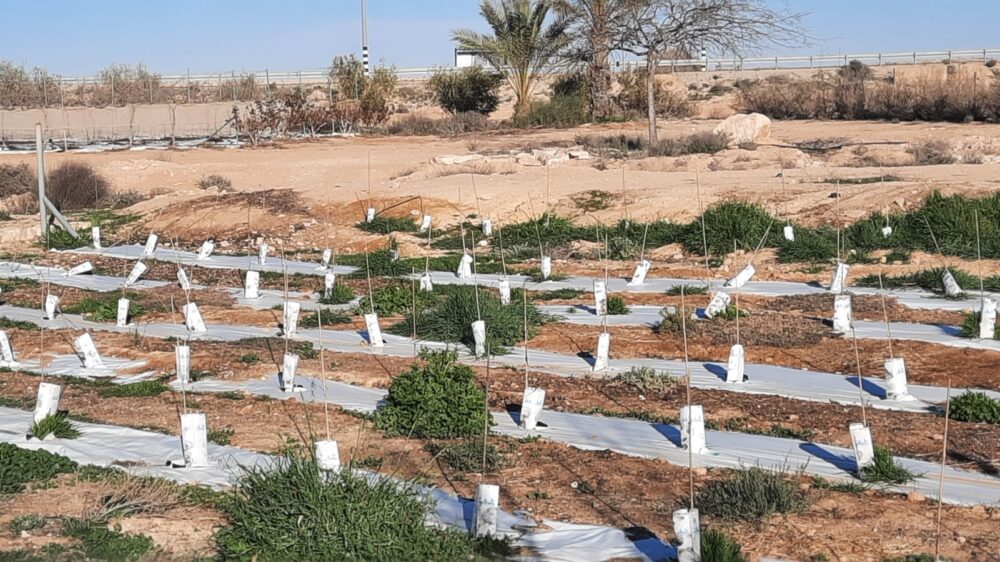 Simcha and Roni Marom’s Eshkolot Farm is run according to the biblical laws of agriculture. Photo by Judith Sudilovsky

What could be more challenging, after all, than being a farmer in the Negev Desert?

Connecting to their roots

But this challenge connected Roni and Simcha Marom to their roots—both were born in Israel’s southernmost city of Eilat—and to the vision of Israel’s first prime minister, David Ben-Gurion.

Ben-Gurion made his own home in this southern desert and famously said, “It is in the Negev that the creativity and pioneer vigor of Israel shall be tested.”

“There is little rain and there are a lot of difficulties with theft, and difficult weather conditions in summer and winter,” she admits.

“But as you see, I am here. I feel like I am a link in the chain of our history.”

Little by little, she learned how to plant trees and how to harvest. She learned about olive oil and wine.

As it is a shmita (sabbatical) year, and the ground is to be left fallow, the fields are currently full of weeds. 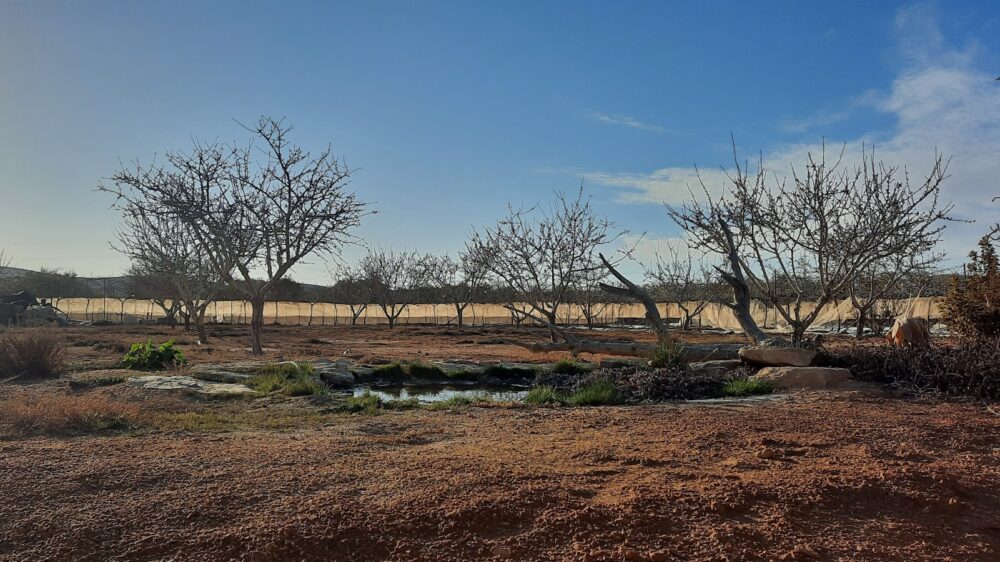 A miracle of nature

“Look about at the beauty, though,” Simcha says of her orchards, vineyard and fields where she grows the seven biblical species – wheat, barley, grapes, figs, pomegranates, olives and dates.

“Not everything from nature is from you. Some things are a miracle of nature.”

Twelve fig trees symbolizing the 12 tribes of Israel are planted in a circle. The two tall date palms are named Boaz and Jachin after the pillars of the First Temple.

There is a 2,000-year-old well across the road from the farm, and two more nearby, a half-hour from the Egyptian border. 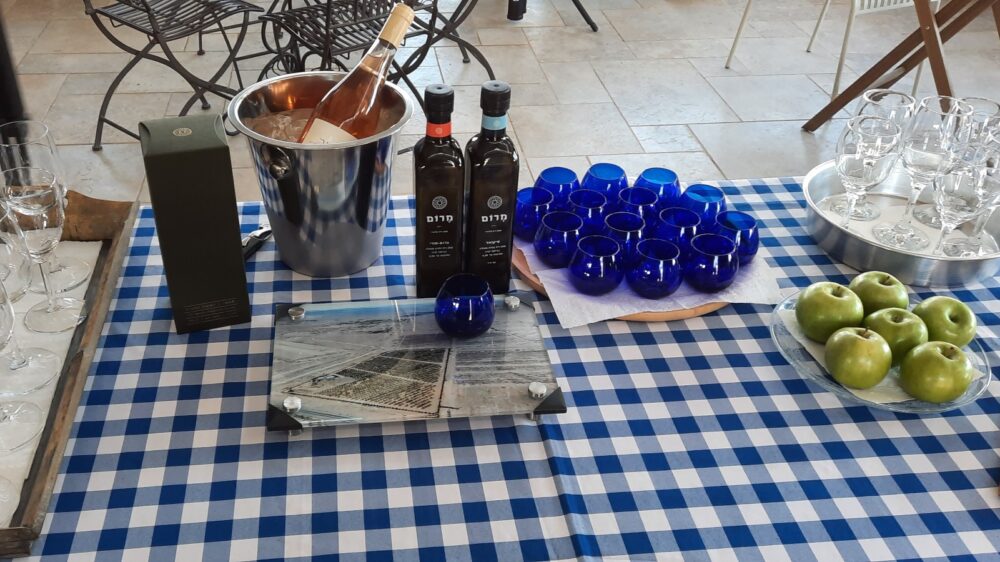 “There was nothing here when we came,” Simcha said. “We renewed this place after 2,000 years. You only live once and this is our life. If this is your dream, the time to live it is now.”

For more information about Eshkolot Farm or to arrange a family or group tour, click here

UNCOVER ISRAEL - Get the ISRAEL21c
Weekly Edition free by email
Sign Up Now!
Bring Israel's story to life.
Millions of people around the world rely on us to gain a deeper understanding of Israel. We are the trusted source for original content you won't find anywhere else.
You can make a difference. Donate today to support journalism that brings Israel’s story alive.
SUPPORT ISRAEL21c
Read more on:   Environment, People, farming, sustainability, Negev Desert, women entrepreneurs, Simcha Marom, Eshkolot Farm