The Village of Peace in Dimona, Israel, is the home of the Hebrew Israelites. Photo by Matthew Allen

Everyone knows that Tel Aviv is the vegan capital of Israel, right? After all, it’s home to scores of vegan restaurants and many of the 5 percent of Israelis who eat a plant-based diet.

Well, here’s a surprise: Long before you could get veggie shawarma in Tel Aviv, a community in the desert town of Dimona pioneered the vegan lifestyle in Israel.

They’re called the African Hebrew Israelites of Jerusalem and they live in a compound called Neve Shalom (Village of Peace). The original 138 members of the community, mostly natives of Chicago, arrived in Israel in 1969.

“We don’t number ourselves, but I guess we’re about 3,000 people. We’ve had 1,150 babies born in our House of Life [maternity center] since 1972 or 1973,” official community spokesman Ahmadiel Ben Yehuda tells ISRAEL21c.

Hebrew Israelites see themselves as spiritual descendants of the ancient Israelites. They are not Jewish, but they consider the Bible their history and guidebook.

In Genesis 1:29-30, a plant-based diet is prescribed for Adam and Eve in the Garden of Eden: “And God said, Behold, I have given you every herb bearing seed, which is upon the face of all the earth, and every tree on which is the fruit yielding seed; to you it shall be for food. … everything that has the breath of life in it, I give every green herb for food.”

“That became the foundation for how we have to conduct ourselves,” says Ben Yehuda. 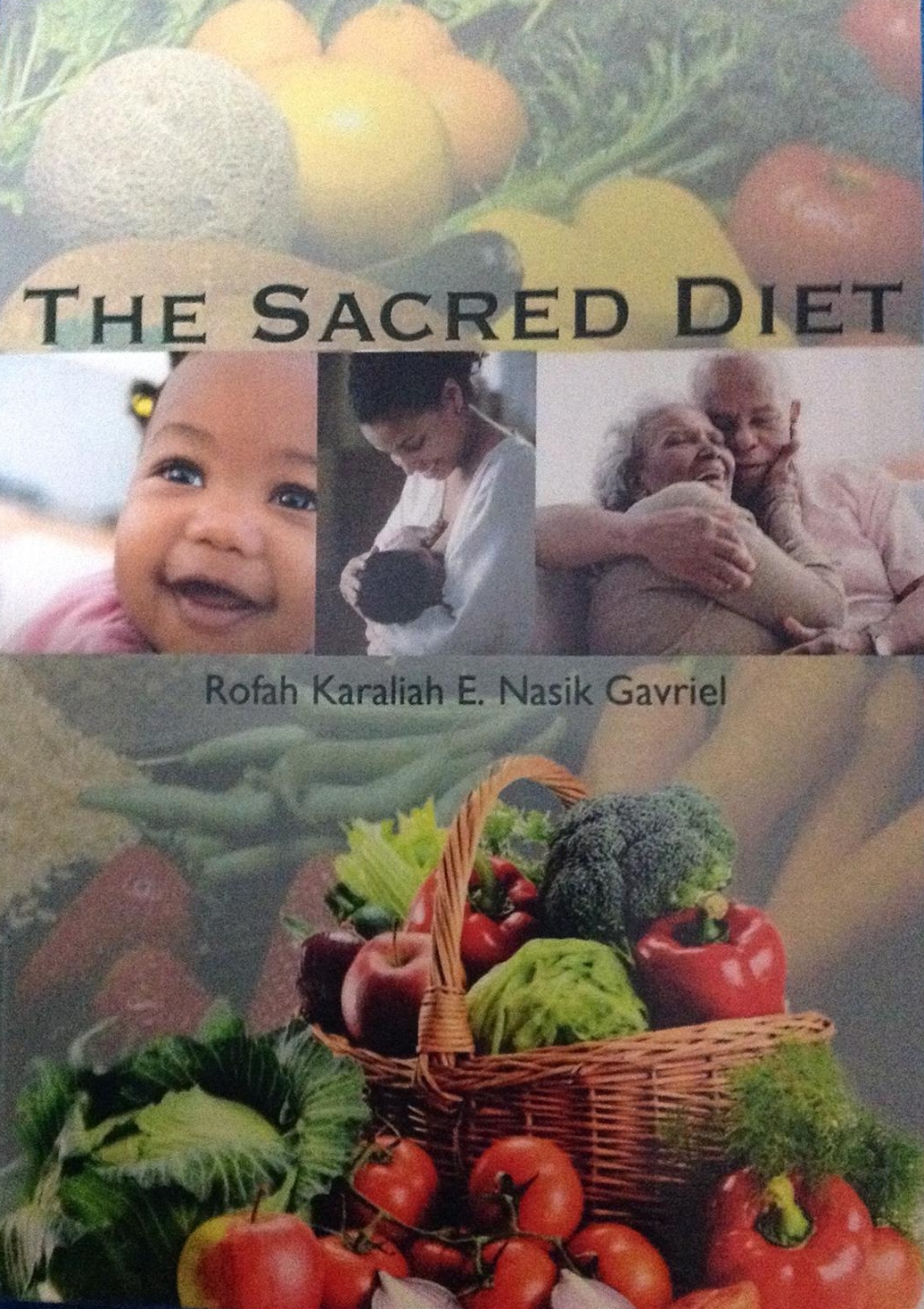 A vegan cookbook by one of the Hebrew Israelites’ pioneers. Photo by Matthew Allen

Ben Yehuda, who immigrated from Washington DC in 1979, said the decision to eschew animal products didn’t come from a health perspective.

Neither did their decision originate from a place of animal rights, “but that is a great added benefit. We have come to understand that humanity needs to take care of the creation better.”

A healthful plant-based diet – whole fresh foods, with little or no refined sugar or table salt — is one of several pillars of Hebrew Israelite culture.

“We eat foods in season and no foods that are seedless. For example, no seedless grapes or watermelon. That goes back to the biblical verse about ‘every herb bearing seed.’ There’s something about the seed that makes it the proper food for our consumption and if you tamper with that it would have a negative effect,” says Ben Yehuda.

Every Saturday, community members over age 13 ingest nothing but water. “We’re not fasting to torture ourselves but to allow the body to relax and cleanse. If someone feels weak, they can grab a piece of fruit,” explains Ben Yehuda. 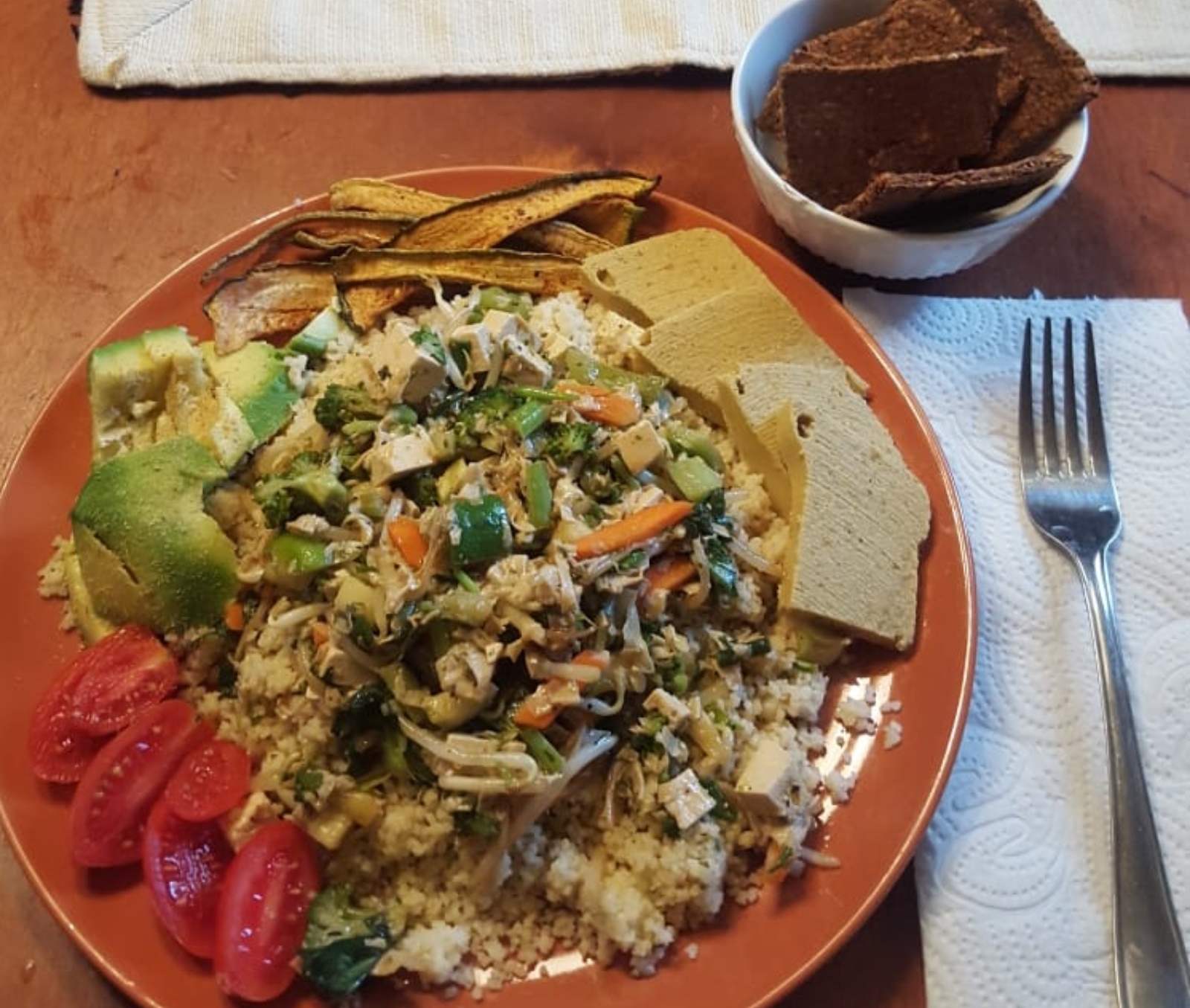 A Live Week dinnerplate in the Village of Peace. Photo by Ahmadiel Ben Yehuda

Four times a year, at the changing of the seasons, Hebrew Israelites consume only “live” (uncooked) food for a week to cleanse their bodies.

Bean curds, fruit and vegetable salads, raw buckwheat, dehydrated flaxseed and pumpkin-seed crackers, bacon-like dehydrated squash and eggplant strips, prune juice and natural fruit leather for the kids are among the foods eaten during that week. 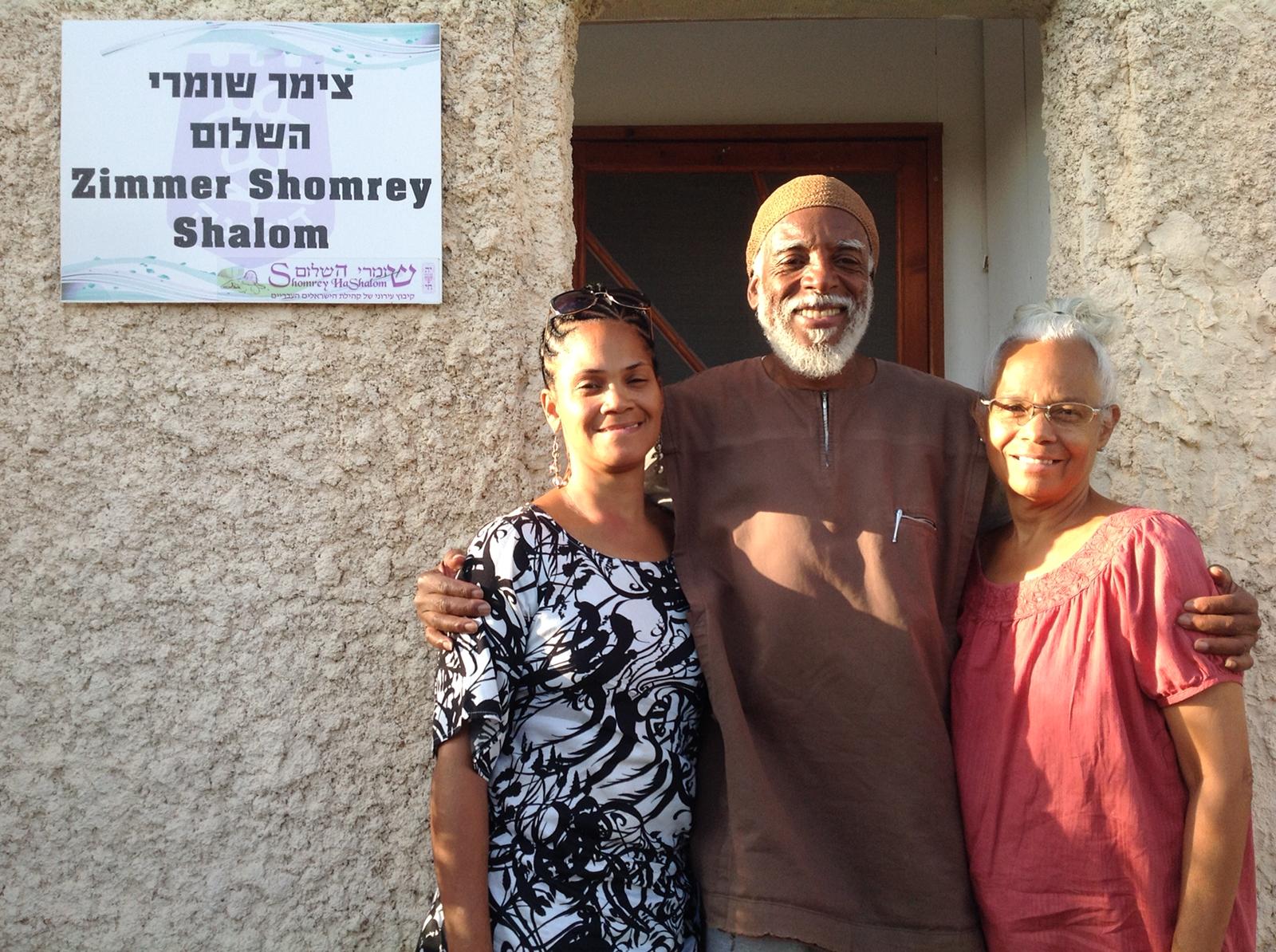 In the early days, the Hebrew Israelites could not find vegan staples like tofu and soymilk in Israel. So one community member was sent to Japan to learn how to manufacture them.

“When he came back, we invested in a factory producing tofu and that led to an entire range of foods that [we] began to develop from soy and other sources,” says Ben Yehuda.

The factory supplied the community and a few vegan restaurants that the community opened in the 1980s around Israel, including Taste of Life in Tel Aviv, which closed two years ago after 35 years. 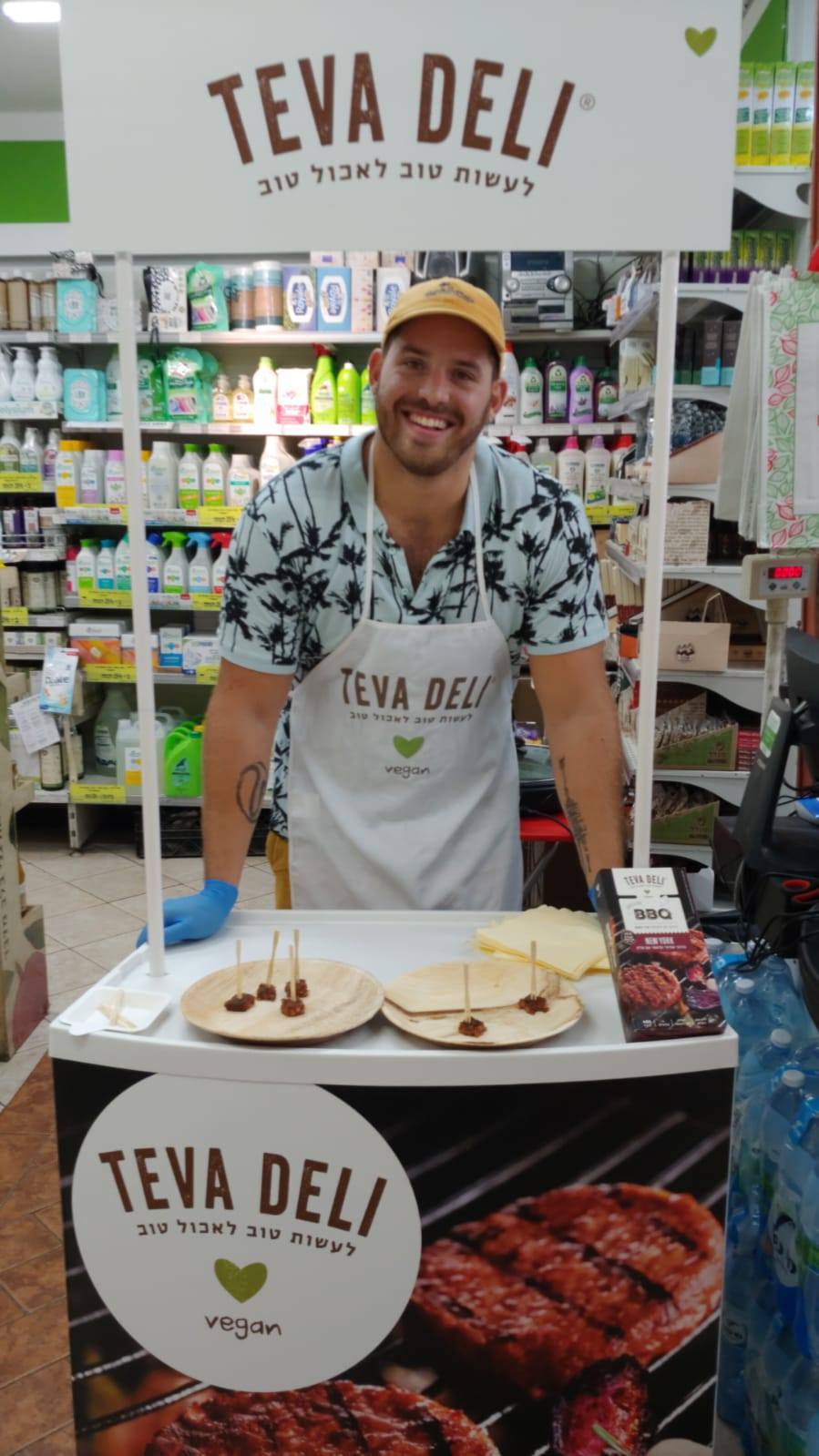 In 1995, the factory rebranded as Teva Deli and grew into a national business.

“We didn’t start and maintain this business because we saw a market to exploit,” says Ben Yehuda. “There was no demand for vegan foods. We had to create the market for it!”

Teva Deli has formulated many vegan products for the Israeli palate – including the cheese substitute that Domino’s of Tel Aviv used to launch the global chain’s 2013 pilot of vegan pizza, and the raw ingredients for Tel Aviv’s iconic Buddha Burger, an eatery that operated from 2006 to 2018.

A separate line of about 50 products for the food-service industry includes raw ingredients such as seitan, tofu and dry soy chunks for preparing vegan main dishes.

“In many of Israel’s major restaurant chains that give a vegan option, it’s private-label products coming from our factory,” factory manager Ben Koliyah tells ISRAEL21c.

Still based in Dimona and employing 50 workers, 80 percent of whom are Village of Peace members, Teva Deli is constantly expanding.

“That is not without its challenges because the more awareness of veganism rises, the more competition we have from big companies like Osem and Tivol,” says Koliyah, 53.

“But we were the pioneers and gave options when no one else gave options. And we are still the only totally vegan community.”

Adopting the Dimona model in Ghana

The Hebrew Israelites have been working with the Ghana Ministry of Health to shift the African country’s approach to healthcare from curative to preventative. Ghana’s Regenerative Health and Nutrition Program is based on the “Dimona model,” says Ben Yehuda.

The community has set up a vegan food production facility in Ghana. Ben Yehuda says the African Union intends to recommend the Dimona model to other African nations. 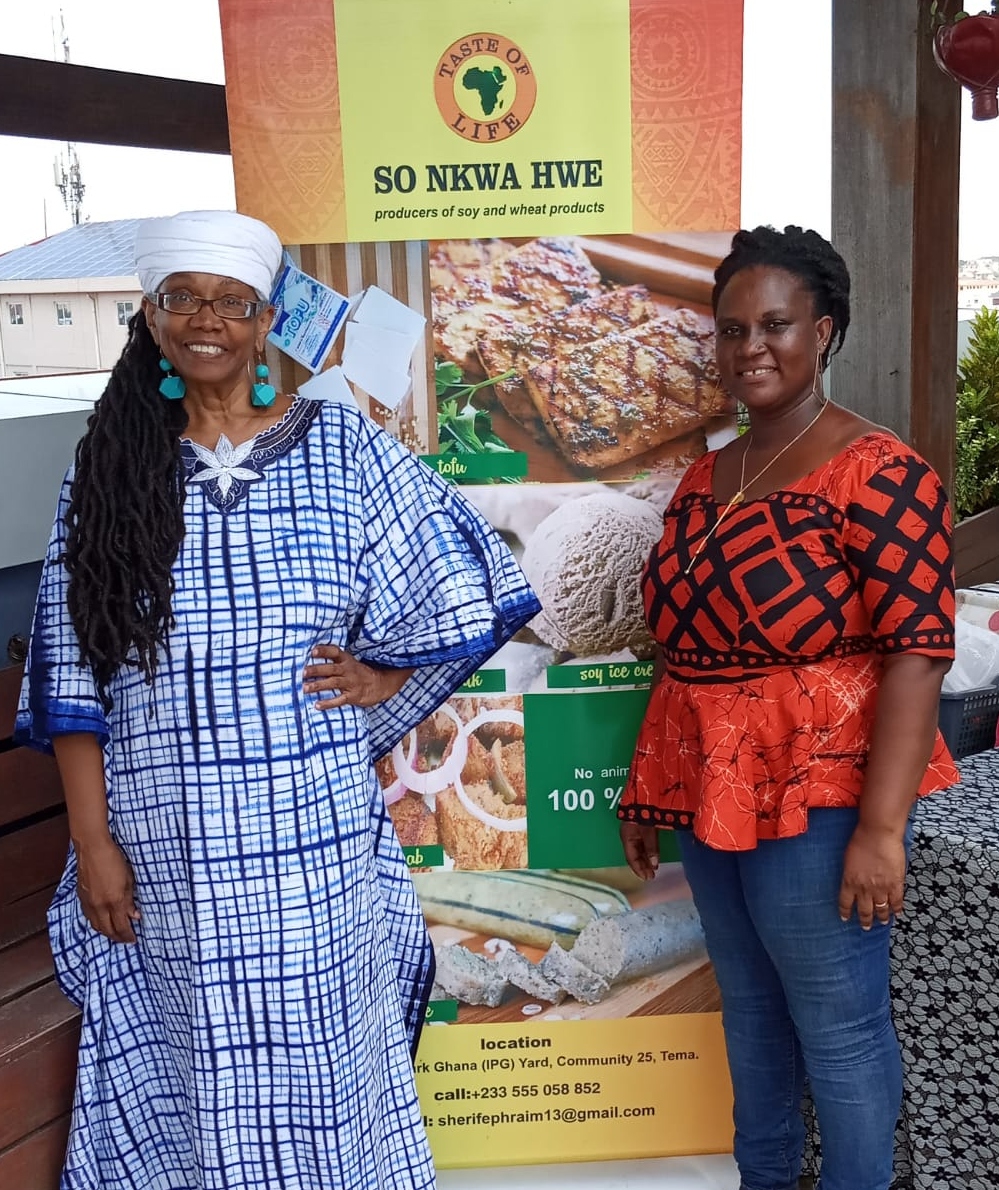 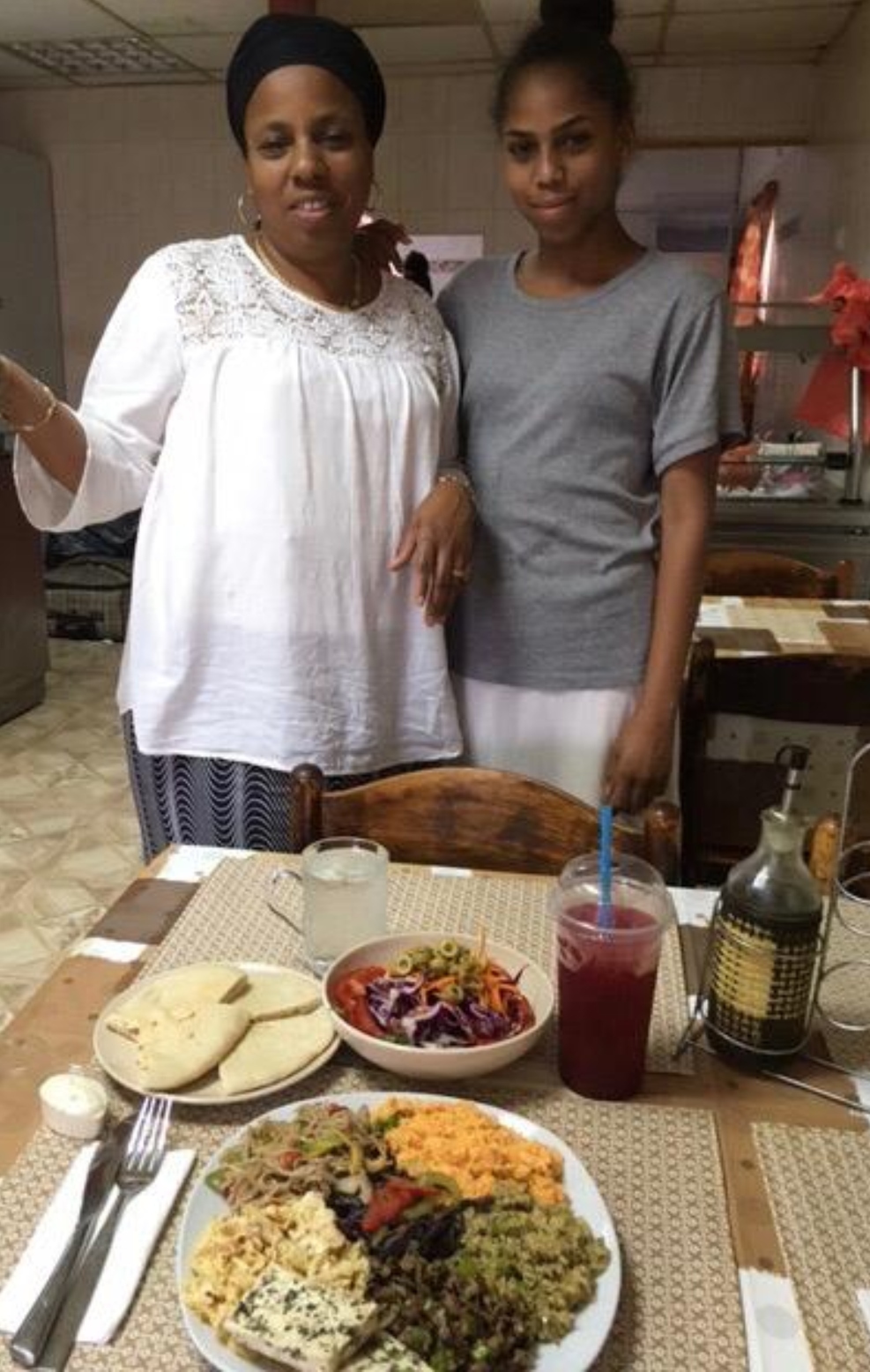 Hebrew Israelites Sister Baht Ammi and her daughter Carmelah in the Village of Peace Miznon. Photo by Matthew Allen

In Israel, visitors are welcome to purchase lunch or dinner at The Miznon, the Hebrew Israelites’ dining hall in the Village of Peace. It is certified kosher by the Dimona Rabbinate.

“We do like to take some credit for Israel being the No. 1 vegan nation,” Ben Yehuda says.

“We feel it was propelled into popularity when our children began entering the IDF and making friends with people from across Israel. The army made a special effort to accommodate them with vegan options.” 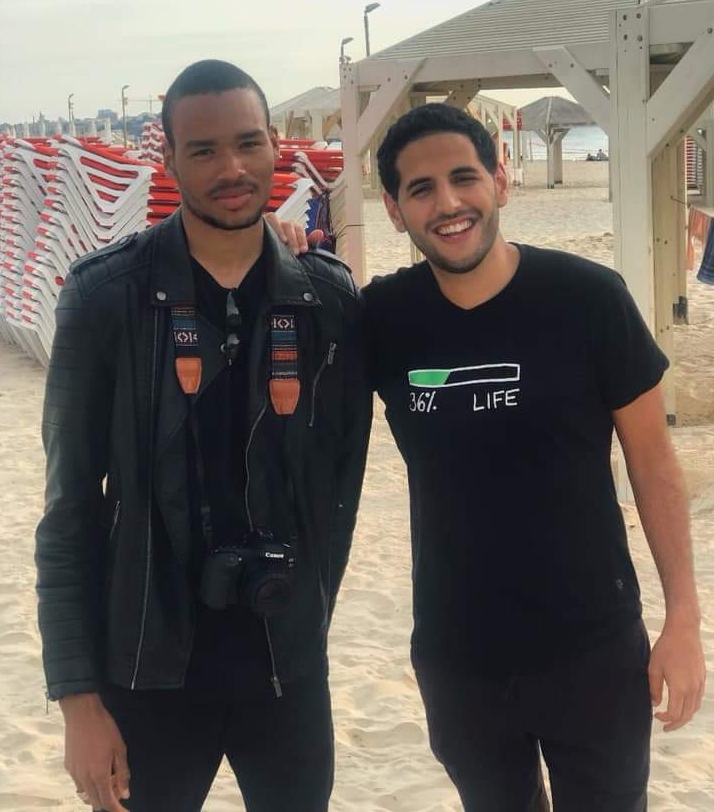 “Gadiel went over to him and said, ‘Tel Aviv is not the capital of veganism; Dimona is.’ And right then and there, Nas googled us. That’s what led him to come and visit us.”

Here is the video that came out of that chance meeting with Gadiel Ben Yehuda of the Hebrew Israelites.

I heard about a village of 5,000 people who are entirely vegan. I had to go visit and see how it's like to be them….This is what I found!I'm fascinated by the effect of food on your body. I take meat for granted, it's just part of my culture. But after visiting these guys…I'm not sure anymore. Follow me on Instagram: @nasdaily for 1 minute videos there.

UNCOVER ISRAEL - Get the ISRAEL21c
Weekly Edition free by email
Sign Up Now!
Bring Israel's story to life.
Millions of people around the world rely on us to gain a deeper understanding of Israel. We are the trusted source for original content you won't find anywhere else.
You can make a difference. Donate today to support journalism that brings Israel’s story alive.
SUPPORT ISRAEL21c
Read more on:   Health, Culture, Environment, Hebrew Israelites, vegan