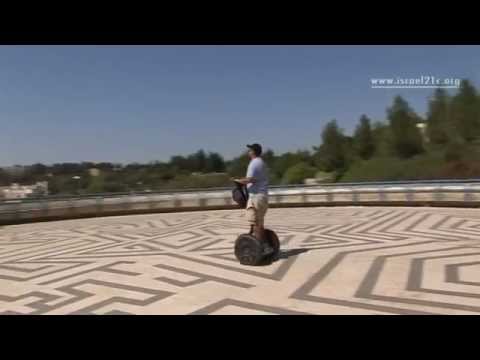 Celebrating Christmas in Israel is a one-of-a-kind experience.

Forget the commercialism that has overtaken the holiday in North America and Europe. Here in the Holy Land, the focus is on the holiday spirit.

Walking in Jesus’ footprints, liturgical concerts at biblical sites, midnight Mass in sacred churches, Christmas fairs and parades — it isn’t a question of what to do but rather whether there’s enough time to do it all.

As the Christian population is a minority in Israel, the holiday is not overtly in-your-face like it is in many Western countries. But you can still deck the halls with boughs of Arizona cypress trees. Every year, Keren Kayemeth LeIsrael-Jewish National Fund plants and raises them especially for Christmas for the Christian community in Israel. 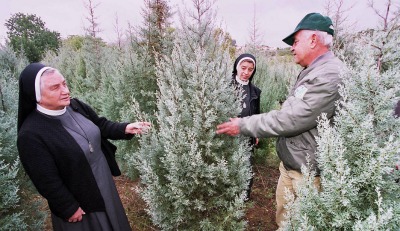 Photo by Joe Malcolm
Choosing a Christmas tree in a KKL-JNF forest.

Israeli grocery stores have started stocking the shelves with Christmas candy — chocolate coins (which are also traditional at Hannukah), marshmallows in the shape of snowmen and Christmas trees, as well as foil-wrapped Santa chocolates.

To help you decide where to go and what to do, ISRAEL21c presents the ultimate guide to Christmas in the Holy Land. 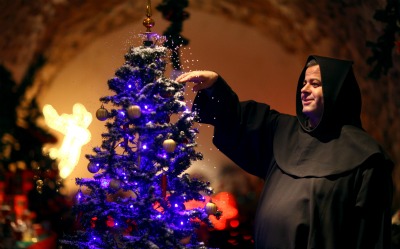 Photo by Abir Sultan/Flash 90.
A monk celebrates Christmas in the Old City of Jerusalem.

There is no holier place than Jerusalem. A spiritual center for all three major monotheistic faiths, it’s one of the most fascinating cities you’ll ever visit and one of the most memorable at Christmastime.

Walk along the Via Dolorosa — the route that Jesus took between his condemnation and his crucifixion and burial; celebrate midnight Mass at the Church of the Holy Sepulchre or Notre Dame of Jerusalem Center; relax at a liturgical concert at the Tower of David in the Old City or groove with soul singer Roy Young at the Church of Augusta Victoria; stroll around the Old City taking in the fascinating history and beautiful architecture.

“A must-see is the menorahs in the Old City in the Jewish Quarter, then all the Christmas lights in the Christian Quarter,” Travelujah founder Elisa Moed tells ISRAEL21c. “It’s such a magnificent display of lights and you won’t get that anywhere else in the world.”

If you didn’t finish your Christmas shopping at home, head over to the Old City’s Christian Quarter outdoor market for olivewood souvenirs or to the more upscale Mamilla Avenue mall.

There’s also a Christmas Eve Family Carol Service in English at the YMCA in West Jerusalem on Dec. 24.

The city of Bethlehem — decorated in tinsel, lights and Christmas trees — celebrates Christmas for nearly two months as different denominations mark the holiday on different dates.

The Church of Nativity and its underground grotto with the famous 14-pointed star — assumed to be the spot where Jesus was born — is a pilgrimage site for all Christians visiting the Holy Land.

There are actually two Bethlehems in Israel. In recent years, Christian tour groups have also included Bethlehem of the Galilee, a small village just outside Nazareth, on their itineraries. This town is believed by many theologians to be the real place of Jesus’ birth.

“If the historical Jesus were truly born in Bethlehem,” archaeologist Aviram Oshri told National Geographic, “it was most likely the Bethlehem of Galilee, not that in Judaea. The archaeological evidence certainly seems to favor the former, a busy center [of Jewish life] a few miles from the home of Joseph and Mary, as opposed to an unpopulated spot almost a hundred miles from home.”

There is nothing specifically set up for Christmas, but as a tourist hotspot for local Israelis on weekends, Bethlehem of the north boasts old Templar buildings, charming stores and gorgeous vistas.

Jingle bells are ringing in Haifa as the Holiday of Holidays Festival continues every weekend throughout December. The multicultural happening celebrates Hanukah, Eid-Al-Adha and Christmas in interfaith harmony. 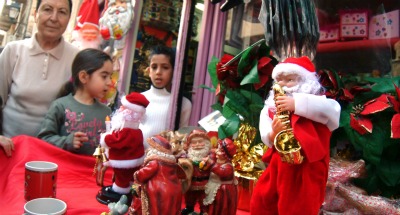 Photo by Jorge Novominsky/Flash90
Children examine figures of Santa Claus at the Holiday of Holidays Festival in Wadi Nisnas.

From an antique fair to special art exhibits, Christmas tree decorations to parades and walking tours, and Israel’s yummy street food, the Wadi Nisnas neighborhood of Haifa is abuzz with family activities every Thursday through Saturday in December. 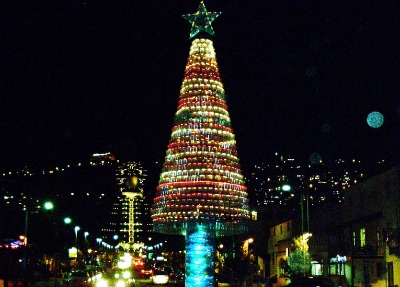 A visit to Haifa isn’t complete without a ride on the cable car. Take it up to the Carmelite Church and Monastery, a 19th century monastery on the slopes of Mount Carmel. From there, head over to the St. John Church for a Christmas liturgical concert on December 24. 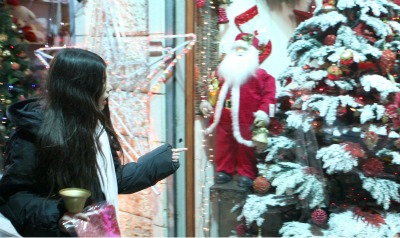 Photo by Liron Almog/Flash90
The atmosphere is joyful in Nazareth.

All is merry and bright in Nazareth, the childhood hometown of Jesus and the Galilean cradle of Christianity.

Nazareth has the largest Christian community in Israel and Christmas is celebrated in style here. And because the local population is celebrating the holiday for themselves and not for tourists (as is the case in Bethlehem), the atmosphere is genuinely joyful.

On the bill: Mass at the Basilica of the Annunciation, an annual liturgical music festival, a Christmas marketplace and the city’s annual Christmas Parade on Christmas Eve.

The Galilee region of Israel is packed with holy Christian sites and there’s no better time to pay a visit than at Christmastime.

The Israeli Ministry of Tourism recently launched the Gospel Trail, a 62-kilometer track that follows the path Jesus is believed to have taken when he left Nazareth for Capernaum on the northwestern shore of the Sea of Galilee, which became the center of his ministry.

“The Gospel Trail enhances the spiritual experience for every tourist and traveler in Israel, and especially for the Christian community. It is a real honor to invite the entire Christian world to follow in the footsteps of Jesus and to walk in the same places where he walked,” Minister of Tourism Stas Misezhnikov said at the official launch of the track.

Holiday rituals include baptism in the Jordan River or taking a boat ride on the Sea of Galilee.

Other must-sees in this region are Capernaum, where Jesus ministered; Tabgha, featuring a mosaic of the miracle of the loaves and fishes; Cana of Galilee, where Jesus transformed water into wine; and the Mount of Beatitudes, site of the Sermon on the Mount.

Tel Aviv doesn’t have much to offer religiously, but in this third-best city in the world according to Lonely Planet travel guide, there’s certainly enough to do. Enjoy your Christmas holiday at the beach, soak up on the city’s culture, take in the Bauhaus architecture or enjoy the café culture and nightlife.

Shops in Tel Aviv’s old bus station, which cater to foreign workers, do have some Christmas paraphernalia for sale. Santa figurines are ubiquitous here, as are other traditional Asian holiday delicacies like dyed eggs. 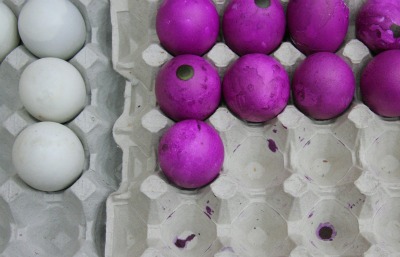 It’s in adjacent Jaffa that the main Christmas celebrations take place. Midnight Mass services are held at the numerous churches in the area, including an English service at the Immanuel Lutheran Church. 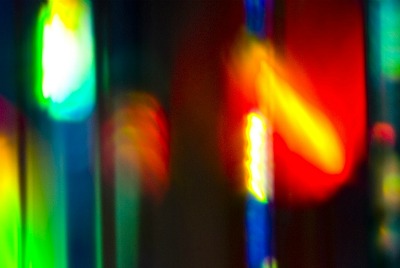 The Jaffa flea market area will be decked out with Christmas lights. There’s also a new art exhibit, “Lights in Winter,” at the Old Jaffa Antiquities Museum opening just in time for Christmas. It’s a group exhibit by 36 Christian, Muslim and Jewish artists from around the world hoping to bring a message of peace.

UNCOVER ISRAEL - Get the ISRAEL21c
Weekly Edition free by email
Sign Up Now!
Bring Israel's story to life.
Millions of people around the world rely on us to gain a deeper understanding of Israel. We are the trusted source for original content you won't find anywhere else.
You can make a difference. Donate today to support journalism that brings Israel’s story alive.
SUPPORT ISRAEL21c
Read more on:   Travel, Explore Israel, Featured