Israelis love their dogs. Nearly 400,000 pet dogs are listed on the Israeli Ministry of Agriculture’s National Dog Registry, and Tel Aviv has the largest number of registered dog owners in the country.

Whether it’s high-tech ways to get rid of doggie doo, unique training programs to turn pooches into Alzheimer guide dogs, new vaccines, or even special television channels for dogs, Israelis are leading the way to make life better for man’s best friend.

Here are some of ISRAEL21c’s favorite ways Israel loves dogs — things that will help you love your dog, too, no matter where you live.

In February, according to DogTV CMO Zuri Guterman, “we will launch with a big platform on the US West Coast, and later in 2013 we plan to expand nationally with at least four or five platforms around the US. We signed several partnership deals with international distributors in Asia and South America, and hopefully this will mature during 2013 as well.”

There are 46 million households with dogs in the United States, encompassing a total of 78.2 million pet canines. 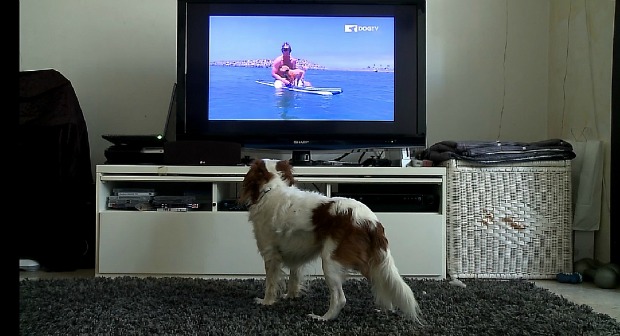 Serial biotech inventor Prof. Oded Shoseyov of the Hebrew University came up with a novel pooper-scooper that gathers dog droppings and turns them into odorless, sterile powder within seconds after the dog-walker releases an activation capsule from a cartridge inside the unit.

Ramat Gan-based Paulee CleanTec, the company founded to develop this and related patented products for cats and even humans, is working with engineers to finalize the design ahead of a product launch in the United States. It will probably be marketed under a different name, but for now the working name remains AshPoopie. 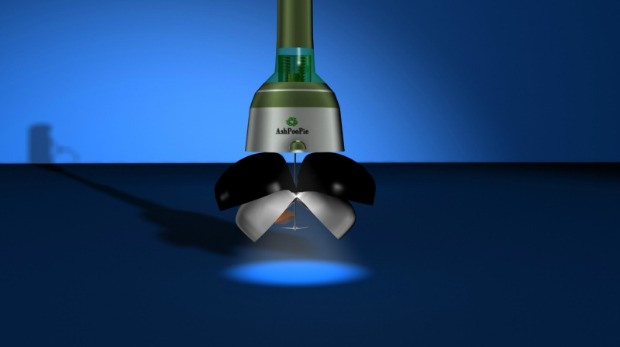 At the low-tech end of the same topic, Israeli inventor Israel Solodoch is awaiting patent approval for his lightweight plastic harness that attaches to the back of a dog and collects the waste in a pouch so owners can dispose of it without scooping or bagging. 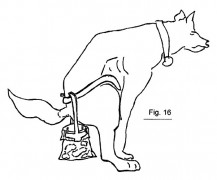 A low-tech alternative in the works.

Canine monocytic ehrlichiosis (CMT) is the most common infectious dog disease, carried by ticks. It can even be fatal. Until now, there has been no cure for CMT. Recently, Dr. Shimon Harrus and Dr. Gad Baneth of the Hebrew University of Jerusalem’s Koret School of Veterinary Medicine in Rehovot revealed that they have a formula for the world’s first vaccine for CMT.

Commercial partners are now being sought to further develop and market the drug. Canine vaccines are the fastest-growing segment within the global veterinary vaccine market, which in 2011 grossed $4.23 billion.

Israel’s Service and Therapy Dog Center was the first in the world to train dogs as helpers for people suffering from mental and physical limitations, including Alzheimer’s, autism and brain or orthopedic injuries.

Alzheimer’s patients frequently can’t leave home because they are easily disoriented, but they’re safe with a guide dog leading the way. As an extra precaution, a GPS navigation system is embedded in the dog’s collar. At home, the dog will press an alarm button if her owner falls and doesn’t get up quickly, or if she hears choking sounds from her master.

The Israel Guide Dog Center for the Blind is the only one place on Earth where guide dogs are trained to respond to Hebrew commands and react appropriately to uniquely Israeli physical environments (like concrete barriers on the sidewalk).

Until former paratrooper Noach Braun and his wife Orna opened the non-profit training center in 1991, blind Israelis had to travel to the US to get a dog – and they had to be fluent in English. Having a local alternative is much less stressful, because during the three weeks of instruction at the center’s Beit Oved campus south of Tel Aviv, family and friends can visit. Center personnel help each applicant acquaint the new guide dog with the home and work environments. 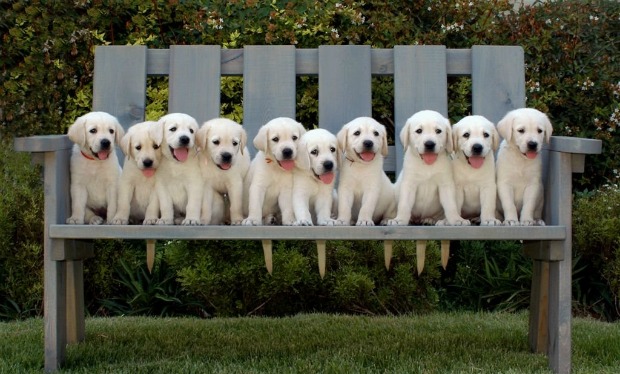 These pups are learning Hebrew to help guide their blind masters.

For vacationing Israelis who prefer not to part with their pooches, the PetBuy chain is offering deluxe doggie accommodations in the guest houses on Kibbutz Eilon, Kibbutz Gesher Haziv and Kibbutz Malkiya, with a choice of Nutram Super Premium food (a diet variety, a “health food” variety, one for allergic dogs and another for older dogs). Owners who present a PetBuy receipt at one of the hotels get entered into a raffle for a free night.

The international website bringfido.com recommends the following Israeli dog-friendly hotels for tourists: The Leonardo Basel and the Cinema in Tel Aviv; The Addar and King David in Jerusalem; the Queen Of Sheba Hilton and Prima Carlton in Eilat; Nahsholim Seaside Resort in Hof Carmel; the guesthouse at Kibbutz Hafetz Hayim; and Prima Tiberias.

The same site lists dog-friendly Israeli restaurants rated by chew bones. The top rating of five bones went to the Herb Farm in Nazareth. Little Tiberias in Tiberias came in next with four bones, followed by Manta Ray in Tel Aviv with three.

Israelis going abroad, or any international travelers to and from the Middle East, should know that Terminal4Pets, located near Ben-Gurion International Airport, offers a door-to-door VIP (Very Important Pet) courier service. Clients can have the dog accompanied by a professional animal attendant and, if desired, a flight veterinarian on the ground. The vet is also available to give pre-flight checkups and recommendations for a safer and easier trip. Terminal4Pets handles all kinds of pets and has arranged for stray dogs adopted by servicemen in Iraq to be flown to new homes in the US. 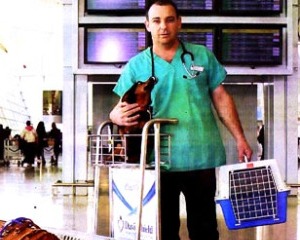 Several years ago, the world’s first Clean Cities pilot project in the Tel Aviv suburb of Petah Tikva used canine DNA to determine which pooch was pooping and which owner was not scooping.

Giving incentives to pet owners to send in a DNA swab from their dogs, the municipal veterinarian collected a database maintained by the microbiology and chemistry lab Bactochem. A local team of inspectors collected DNA from dog waste in special bins placed around town, and owners found to have deposited it properly won coupons and pet prizes. Those who left it on the streets were fined.

A Bactochem spokeswoman tells ISRAEL21c that the project is on hold pending the resolution of several legislative and technical issues. “There are a few Clean Cities interested, if these problems can be ironed out. Meanwhile, the technology has been improved for when they are ready to try it,” she says.

An Israeli biometric alert sensor transforms any dog into a sophisticated warning system that can detect an intruder and send out an alarm.

Bio-Sense Technologies designed its sensor, DBS, to fit onto the dog’s collar and integrate with existing security systems. If the dog starts to bark or growl in an unusual way, the algorithm-based system goes into alert mode, sending out details of the security breach via SMS and triggering the burglar alarm.

The product comes in two varieties, one for the security market, suitable for medium to large facilities protected by guard dogs. The consumer version, TeleDog, is mobile and personalized. The cellular-based sensor monitors not only the dog’s barking but also its movements via GPS. Both systems are manufactured and sold in Israel and shipped to customers internationally. TeleDog retails for about $199.