If nature calls while you’re touring Jerusalem, there’s no need to pretend you’re a patron of the nearest hotel or restaurant — though that tactic usually works. Israel’s capital city has between 40 and 50 well-marked public restrooms, from as far north as Ammunition Hill to as far south as the Sherover Promenade. The Old City alone has 13 public johns spread across the Jewish and Muslim quarters, though only eight appear on the confusing Hebrew map given out at the Tourist Information Center.

A list of 40 public restrooms is available at the municipal website in Hebrew only, indicating location and hours. Only seven operate 24 hours a day; most open at 7 or 8 in the morning and get locked between 5 and 10 at night. Ten of the bathrooms on the list are marked as accessible to people in wheelchairs, but there are a few more that aren’t on this list. (Mapsjerusalem.com reportedly sells a map with all public restrooms clearly marked, but we can’t vouch for that.)

ISRAEL21c’s random sampling revealed that public bathrooms inside buildings generally are nicer than freestanding units, which often lack toilet paper, soap and — ahem — ambience. But hey, if you gotta go, you gotta go.

The 10 we recommend are: 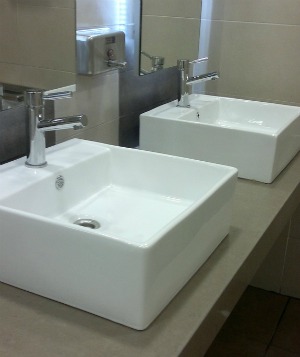 Situated conveniently at the junction of Jaffa Road and Sarei Yisrael, down the block from the Central Bus Station (where public restrooms cost a shekel), Shaarei HaIr offers two sets of bathrooms clearly marked with signs at the main entrance. These spotless, pleasant facilities rival those in hotels. There are three stalls in the second-floor ladies room and four on the fifth floor. 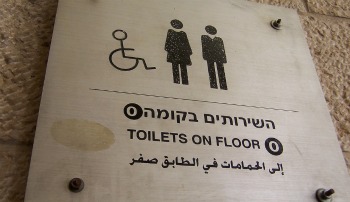 Photo by Abigail Klein Leichman
Sign for the restrooms at Safra Square.

Located one floor down from the main plaza of the municipal complex, these restrooms are squeaky clean with adequate toilet paper and soap. The ladies’ room is in two sections, each with five lavender-painted stalls and three sinks. 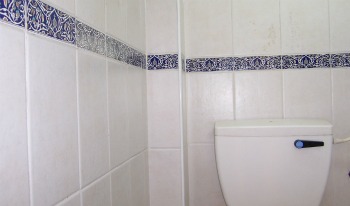 Down a few steps in the park straddling the major downtown intersection of King George and Bezalel, you’ll find a clean, pleasant restroom with a real live attendant. There’s even decorative tiling on the stall walls. This was the only public park restroom to merit a mention on our list. 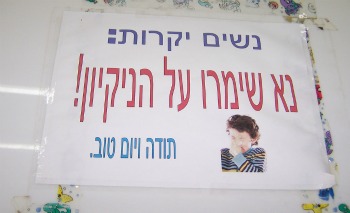 Photo by Abigail Klein Leichman
At the Machaneh Yehuda ladies room: “Dear ladies: Please keep it clean! Thank you and have a nice day.”

Oddly, the “shuk” has three men’s rooms and only one ladies’ room listed on the municipal site. It’s mostly for that reason that the women’s loo appears on this list. There’s toilet paper and soap and it’s relatively clean, but its location next to a fish vendor does not help the odor factor, despite the humorous signs posted on each of the three stalls.

5. In front of the Museum of Italian Jewish Art

Walking around downtown? Right in front of this museum at 27 Hillel Street, there’s a freestanding public restroom that’s clean and roomy. The toilet flushes automatically each time the door is opened (there’s a button you push to release the latch), and a space-saving three-in-one unit offers soap, water faucet and air dryer.

Another downtown option, this large (11 stalls and eight sinks) bathroom is located on the bottom floor of an office building near central Zion Square, across from the Rav Kook House and Psalms Museum. It is relatively clean and has a wheelchair-accessible stall. When we visited, however, all but three stalls were locked even though nobody was in them. We assume that was a temporary situation.

This artist’s colony just west of the Old City walls and north of Sultan’s Pool is filled with individual workshops and stores in a series of lanes. Down the steps from Hebron Road leading to Lane 5 is a public restroom to the left. There’s no sign at street level. Nothing fancy, but it offers six stalls and two sinks, supplied with plenty of paper goods and soap. 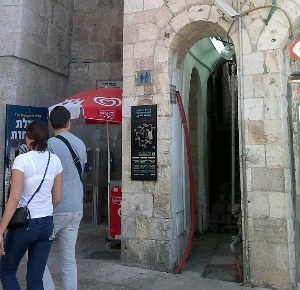 Photo by Abigail Klein Leichman
You could easily miss the sign for this restroom.

At this entrance to the Old City, just before the Tourist Information Center, take a hard left and go up the arch-covered stairs toward the Ramparts Walk. Here is a brightly lit bathroom with three stalls and three sinks. Like most Old City public restrooms, this one has friendly Arab attendants at hand.

The northern side of the Western Wall plaza has heavily used facilities for men and women, and they’re spacious, clean and feature large mirrors. But if you’re female, skip the main ladies room and continue a few steps to your left to find another option, this one with a diaper-changing table (something we did not see in any other public bathroom), nine stalls and four sinks. As you exit, you’ll see posted the Jewish blessing traditionally recited after elimination. 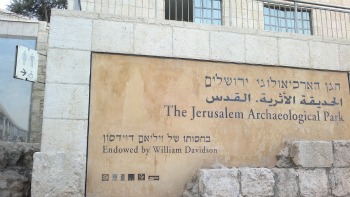 Photo by Abigail Klein Leichman
Note the bathroom sign at the upper left.

Just inside the Dung Gate is the Jerusalem Archeological Park, aka the Davidson Center. Tucked away near the ticket booth and entrance is a marked public restroom that’s got three stalls, three sinks and a wheelchair-accessible stall. This is one of the nicest facilities in the Old City, and a good place to stop before or after a tour of the Western or Southern Wall excavations.

UNCOVER ISRAEL - Get the ISRAEL21c
Weekly Edition free by email
Sign Up Now!
Bring Israel's story to life.
Millions of people around the world rely on us to gain a deeper understanding of Israel. We are the trusted source for original content you won't find anywhere else.
You can make a difference. Donate today to support journalism that brings Israel’s story alive.
SUPPORT ISRAEL21c
Read more on:   Travel, toilets, Tel Aviv