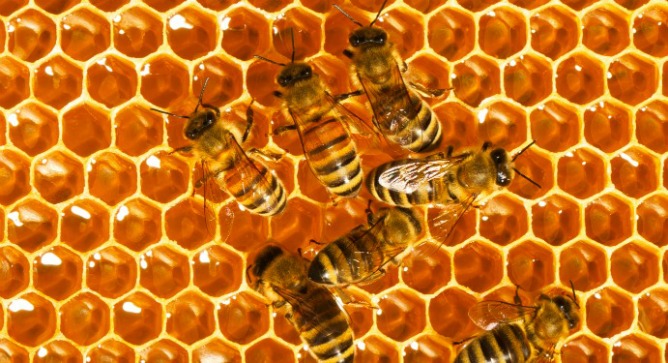 Honey and Rosh Hashana — the Jewish New Year – are inseparable because of the tradition of eating honey-drizzled apples to herald a sweet year. In the month of holidays beginning with Rosh Hashana (this year, Sunday night September 16), Israelis will be consuming 1,600 tons of the sweet stuff produced by 100,000 beehives.

Not merely a yummy treat, honey possesses healthful anti-inflammatory and antibiotic substances. Israeli researchers are at the forefront of learning how to raise the most vigorous bees and use their honey (and pollinating powers) for the good of humankind.

Here ISRAEL21c serves up some sweet facts about honey and honeybees from Israel.

1. A spoonful of honey quiets a nighttime cough

Who needs cough syrup when you’ve got pure honey from nature? A recent Israeli study proved that a spoonful of honey can improve childhood symptoms of the common cold in a much safer way than over-the-counter medications.

The study from the Pediatric Community Ambulatory Care Clinic at Clalit Health Services in Petah Tikvah, published in Pediatrics, was based on a trial where coughing children were given a single dose of either eucalyptus honey, citrus honey, labiatae honey or a date syrup before going to sleep. Parents who gave their children honey reported significant improvement in cough frequency, severity and sleep quality. 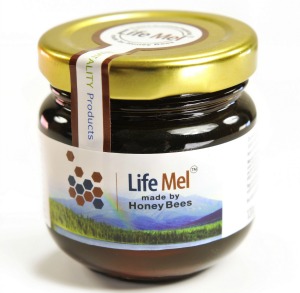 LifeMel honey is produced by bees fed on a special nectar from 40 therapeutic herbs.

Thirty years of research went into developing LifeMel Honey, which is produced by bees fed on a special nectar derived from 40 therapeutic herbs including Siberian ginseng, Echinacea, uncaria tomentosa, and natural sources of iron, protein and vitamins. This Israeli honey from Zuf Globus Laboratories has been shown in one small clinical trial to be effective in decreasing the incidence of anemia in cancer patients undergoing chemotherapy.

According to the study published in the Journal of Medical Oncology, two teaspoons a day of LifeMel also lowered the incidence of potentially fatal thrombocytopenia (low blood platelets). The product is sold also in North America, the United Kingdom and online.

3. Spread some honey on that cut

Honey is a traditional remedy for the treatment of infected wounds. Israeli medical researchers, including Dr. Jacob Golan, head of plastic surgery at Shaare Zedek Medical Center in Jerusalem, have investigated that piece of folk medicine scientifically. In the early 1980s, experimenters inflicted small skin wounds on two groups of mice. They treated one group’s wounds with conventional products, and the other with ordinary honey. The honey-treated mice healed much more quickly than the other group.

What makes it work? Honey has low levels of hydrogen peroxide, and some strains have an additional phytochemical antibacterial ingredient. Also, honey tends to absorb the moisture that bacteria need to grow and spread. 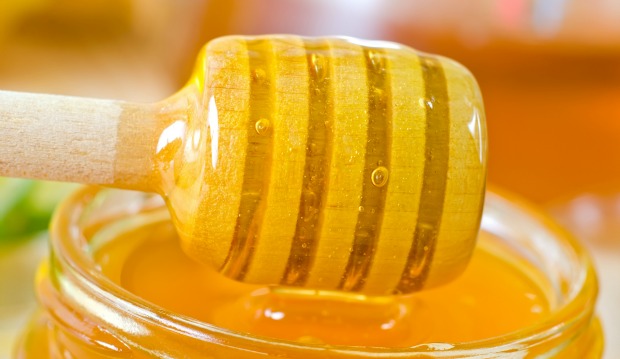 Several viruses are devastating bees around the world in the past few years, including a strain that causes colony collapse disorder (CCD). Fewer bees greatly affects honey production as well as all food production that requires pollination – from fruits and nuts to the dairy and beef cows that feed on alfalfa.

Beeologics was founded in 2007 in Israel to address the problem with nontoxic products developed by virologists and microbiologists. With offices and labs in Miami and in Rehovot, Israel, the company was acquired by Monsanto in 2011. The lead product, Remebee, is an anti-viral treatment under research for honeybees affected with Israeli Acute Paralysis Virus (IAPV). Remebee is currently in regulatory trials with beekeepers across the United States. Meanwhile, the next generation of Remebee, still in the lab, could potentially protect honeybees from up to seven different viruses.

5. Bees with a chip on their shoulder

The Israeli company CartaSense found a novel solution for monitoring bee colonies to protect them from theft and CCD: chip-based sensors placed below the hive in a thin platform to track the hive’s weight gain as it gets inhabited by bees and their honey. 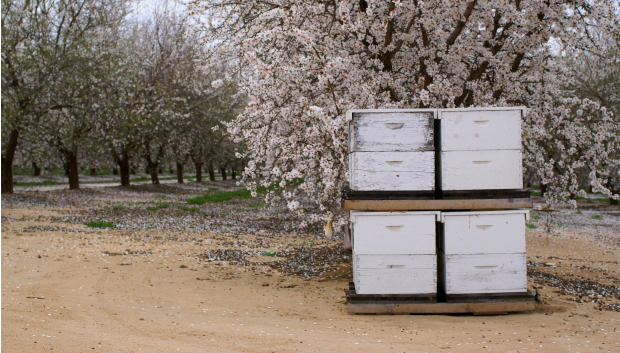 The Bee Connect product immediately detects any deviations from normal hive growth, alerting beekeepers via a daily report. It also tracks bee movement inside the hive, as well as temperature, humidity and carbon dioxide levels, and provides a way to track a stolen hive.

6. Tree from Down Under helps Israel’s honeybees 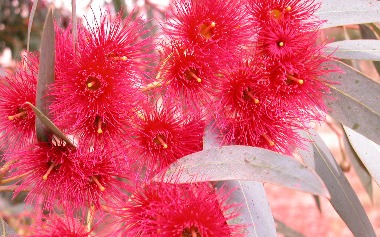 Most of Israel’s trees and shrubs flower in the spring, leaving beekeepers scrambling to keep their honeybees fed during the other three seasons. About 12 years ago, Israeli researchers began introducing Australian eucalyptus trees, which produce nectar- and pollen-filled blooms from April to September. Two years of extensive testing pinpointed just the right species that Israeli bees find tasty, and that are drought-resistant.

Since then, one million eucalyptus seedlings have been raised in Keren Kayemeth LeIsrael-Jewish National Fund nurseries for Israel’s beekeepers. The variety of bee-friendly trees was later expanded to include some indigenous species such as a carob that produces many flowers attractive to bees. Jordanian beekeepers also benefited from the project.

Since 1994, researchers at the Hebrew University have been studying bee behavior in the humorously named Beehave lab — a glassed-in hall associated with the Center for the Study of Rationality. Beehave allows ecologists to study the decision-making processes of bees, particularly with regard to foraging for food.

Beehave bees flit around artificial flowers that are actually computerized devices to record bee visits and control feeding times and amounts. Observation of decision-making by bees may provide a basis for studying how other animals and people – and even computers — make optimal and consistent decisions. Beehave also enables the scientists to test whether bees can sharpen their flight dynamics and arithmetic skills. 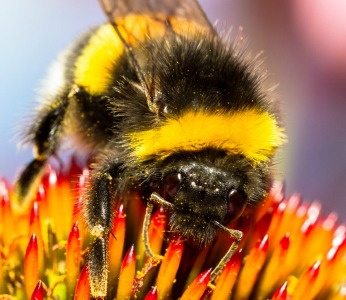 The Hebrew University’s Triwaks Bee Research Center in Rehovot collaborates with researchers from other institutions in Israel and abroad to study honeybee decision-making processes and use that information toward smart solutions for agricultural problems such as low-yielding crops. This is of great significance around the world, because crop and flower pollination by bees sustains about one-third of the human diet.

Triwaks scientists have found ways to increase effective bee pollination and orchard yields by 50-100%, and have devised supplementary nutrition formulas for honeybee colonies that are used throughout Israel. In addition, they discovered a way to use bees as delivery vehicles for bio-control agents in strawberry fields; and are exploring possibilities for using “gene silencing” to improve bee health.

9. Almonds and honeybees 4-ever

Why does the nectar of almond trees contain an extraordinary substance that is harmless and very attractive to honeybees, but is poisonous to other creatures? Whatever the reason, almond trees cannot produce fruit without honeybees. In fact, California almond growers import truckloads of honeybees during the almond’s flowering season, so as to ensure pollination.

Trying to understand this phenomenon, two years ago University of Haifa environmental and evolutionary biology researchers exposed honeybees to plates of nectar that had varying concentrations of the toxin and a plate of nectar without the toxin. The bees always preferred the almond-derived nectar with the toxin, leading the researchers to speculate that this unusual substance keeps away ineffective pollinators in favor of the “expert” honeybees. 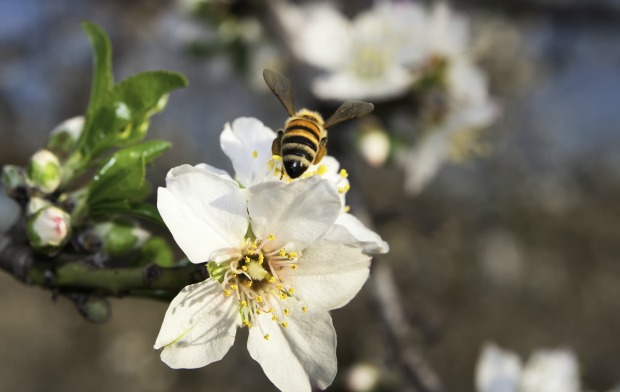 The nectar of almond trees contain a substance that is harmless to honeybees but poisonous to other creatures. Photo by www.shutterstock.com

The honey mentioned 22 times in Hebrew Scriptures, most famously to describe Israel as “a land flowing with milk and honey,” has always been assumed to refer to date honey – still a popular Israeli product – rather than honey produced by bees.

However, five years ago, Hebrew University archeologists discovered a 3,000-year-old apiary in the Iron Age ruins of Tel Rehov in the Jordan Valley. The million or more bees kept in 100 to 200 clay cylinders at this oldest known commercial apiary in the world were most likely imported from Turkey, suggesting a surprisingly sophisticated business setup for its time.

Honey, it seems, was one of the very first products of the “startup nation” long before the advent of technology.

UNCOVER ISRAEL - Get the ISRAEL21c
Weekly Edition free by email
Sign Up Now!
Bring Israel's story to life.
Millions of people around the world rely on us to gain a deeper understanding of Israel. We are the trusted source for original content you won't find anywhere else.
You can make a difference. Donate today to support journalism that brings Israel’s story alive.
SUPPORT ISRAEL21c
Read more on:   Health, Research, honey, Jewish New Year, Rosh Hashana