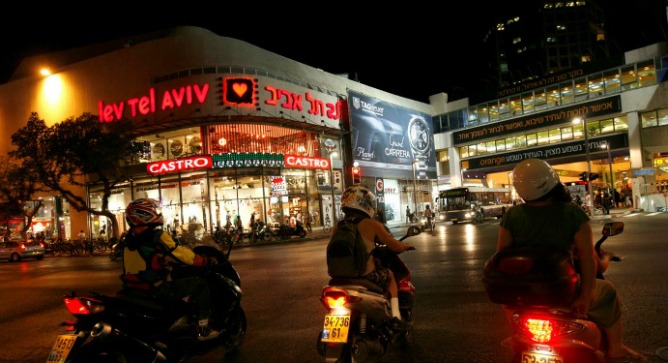 Do you Dizengoff? If not, then now is a great time to learn how.

The slangy Hebrew coinage “l’hizdangef” (“to Dizengoff”) expresses the action of strolling down this iconic Tel Aviv north-south street, starting from just below the Tel Aviv Port and ending just past the Mann Auditorium concert hall.

Built in the 1930s in tribute to Tel Aviv’s first mayor, Meir Dizengoff, the famous boulevard runs parallel to the beach a few blocks to the east, and boasts a central place in the White City’s culture and history.

Forty years ago it was getting a bit seedy, but lately Dizengoff has regained its position as one of the most vibrant arteries in Israel’s beach city. From designer shops and museums to nightlife and natural foods, there’s much to explore on the two-mile stretch – and you might even run into Madonna if she’s in Israel, visiting the Kabbalah Center at the corner of Dizengoff and Ben-Ami.

ISRAEL21c went Dizengoffing recently to pinpoint 10 of the most interesting stops along the way, starting at the southern tip where the street veers east.

Opened in 1957 as a home base for the Israeli Philharmonic Orchestra, the Mann’s 2,760-seat hall has hosted the likes of Leonard Bernstein, Izhak Perlman, Yehudi Menuhin, Daniel Barenboim, Isaac Stern, Arthur Rubinstein, the Berlin Philharmonic, the London Symphony and the Philadelphia Philharmonic Orchestra. The building is expected to reopen in the spring following a NIS 140 million ($36.5 million) renovation. 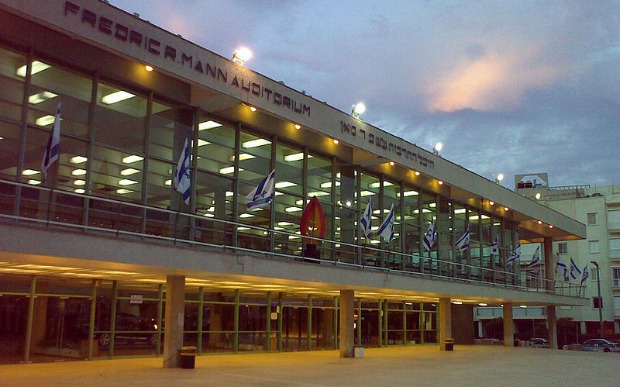 The Mann Auditorium before renovation. Photo courtesy of Wikimedia Commons 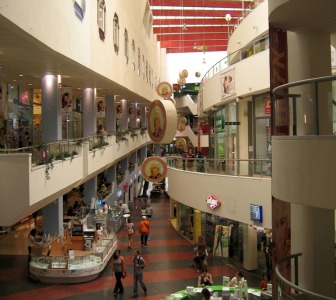 The Dizengoff Center straddles both sides of the street and is open daily. Photo courtesy of Wikimedia Commons

This mammoth shopping mall – Israel’s first, when it opened in 1983 – straddles Dizengoff Street with two towers connected by skywalks and underground passages, and topped with a residential skyscraper and an office building. Designed by Israeli architect Yitzhak Yashar, the mall has well more than 400 stores, plus a multiplex movie theater, restaurants, design and exhibition center, specialty stores, and rooftop fitness center and swimming pool. Every Thursday and Friday, a Food Fair allows you to sample dishes from the mall’s eateries. Dizengoff Center is open daily and has free Wi-Fi throughout.

Bauhaus Center directors Micha and Shlomit Gross give tours of the historic International style-Bauhaus architecture of Tel Aviv, distinguished for its white facades and rounded, minimalist structure. Because it has the largest such collection of Bauhaus buildings in the world — about 4,000 buildings constructed between 1932 and 1948, many of them on or near Dizengoff — Tel Aviv was nicknamed the White City and designated a World Cultural Heritage Site by UNESCO. 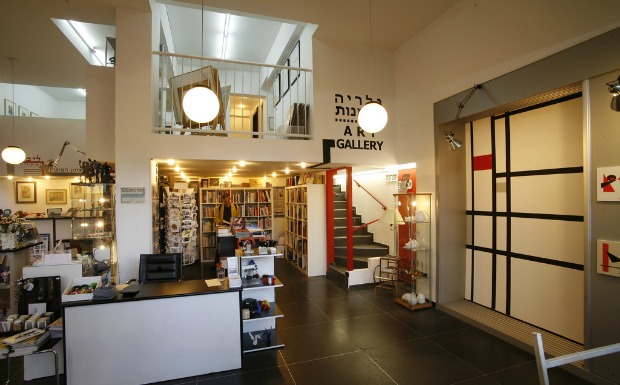 Inside the Bauhaus Center.

Dizengoff Square, a large plaza at the confluence of six streets, was built in the 1930s in honor of the mayor’s wife, Tzina. In the 1970s, the square was reconstructed and elevated above the street to ease traffic congestion, and a fountain was added to the middle. Pedestrian walkways link the square to either side of Dizengoff. Sometime next year, the square is to be returned to street level in response to strong public opinion. 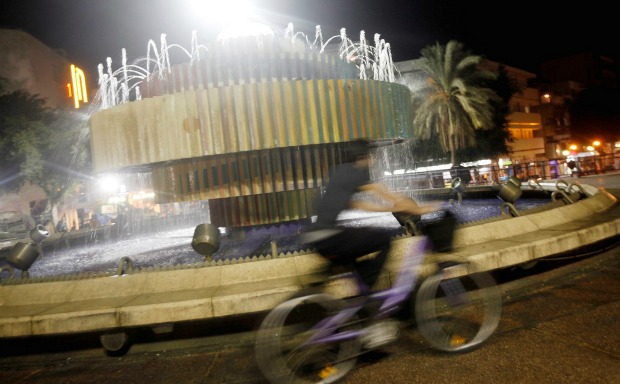 The Agam fountain at Dizengoff Square. Photo by Flash90.

In 1986, the original fountain was replaced with the Fire & Water Fountain by renowned Israeli optical artist Yaacov Agam. Its five large rotating rings are each painted a different color. When it’s working properly (this will be part of next year’s renovations), water spurts from the rings and a flame rises from the peak, accompanied by music at the top of every hour.

At Dizengoff Square every Thursday from 4-11 p.m., the municipality hosts Fashionably Late, a market presenting creations of young Israeli industrial, graphic, fashion and plastic designers. And every Tuesday and Friday, the square is filled with artists and antique vendors.

Both of these Atlas Hotels boutique properties are in renovated Bauhaus structures overlooking Dizengoff Square. The Cinema Hotel once housed the Esther Cinema and is decorated with original projectors and movie posters. The smaller Center Chic next door celebrates the culture, architecture and art of Tel Aviv, with a living room-style lobby offering books and albums about Tel Aviv as well as short historic films.

In the lobby of the Cinema Hotel.

The merchandise in this trendy shop changes entirely every three months (hence its clever name). Short:Story is a concept store from 911 Fashion, founded in 2001 to introduce luxury foreign fashion brands to Israel. After the newest line gets launched here, it goes on sale at the three Story boutiques, one of which is at No. 246 Dizengoff.

When we visited, the funky shop was devoted to the Israeli debut of Switzerland-based Freitag’s pricey hand-sewn bags and home accessories made from recycled tarpaulins, seat belts and bicycle tires. 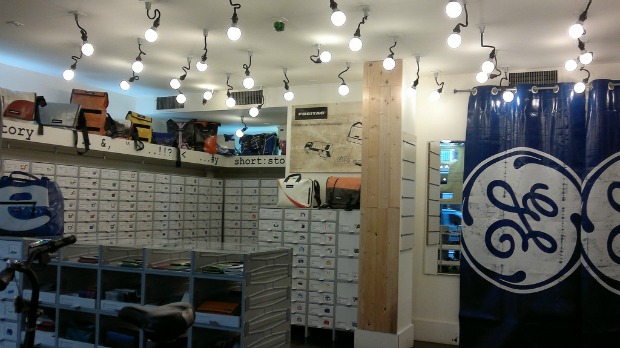 Short:Story launches one brand at a time.

Wedding wear is a category unto itself on Dizengoff, especially north of Arlozorov Street. We gave up trying to count the number of bridal salons lining both sides of the boulevard. 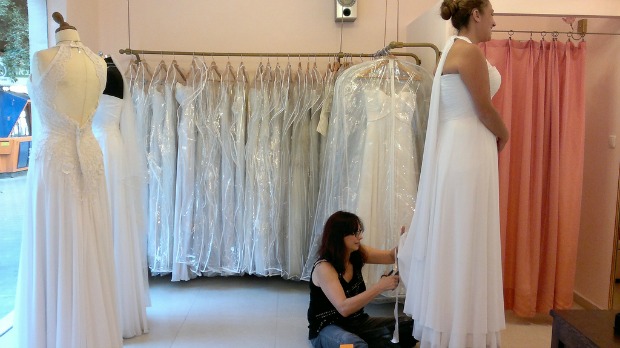 A bride gets fitted inside one of Dizengoff’s many bridal salons.

ISRAEL21c asks one bridal shop owner why Dizengoff is such a magnet for this niche, and she shrugs. “It’s been like that for many years,” she says. “As soon as one bridal store leaves, another comes in its place.” 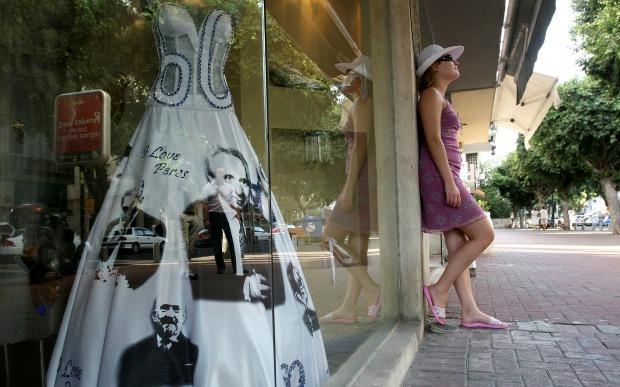 Celebrating Israel’s history in a wedding dress. Photo by Flash90. 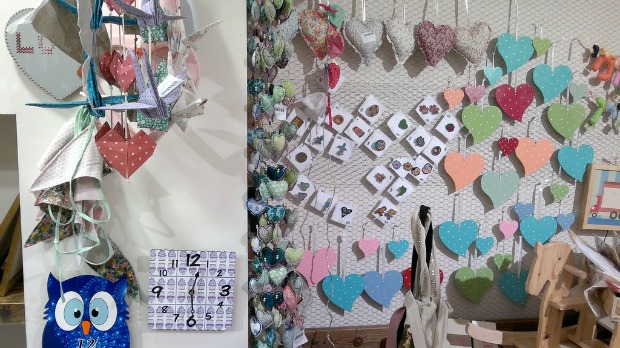 Gifts at Kelim Shloovim are made and sold by people with physical or mental disabilities.

Art collector Dan Chill founded this gallery in 2003 to showcase works of naïve art — characterized by the use of bright colors and child-like perspective to portray idealized scenes of everyday life. The works on display come from Israel (Rafi Perez is among Israel’s foremost naïve painters) as well as 31 countries in Western Europe, Africa, Australia and the Far East. 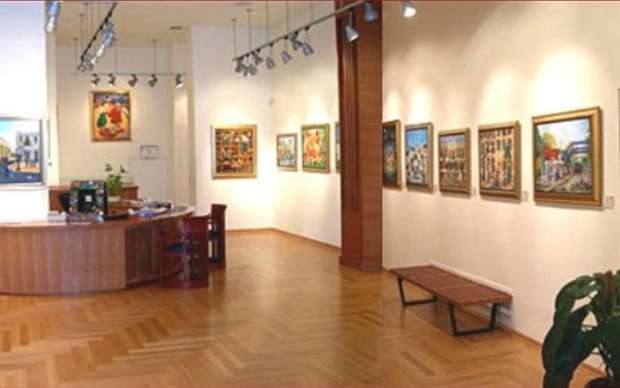 Inside the GINA gallery.

Coffee shops and cafes, pubs and bars abound on Dizengoff Street. One very popular tapas bar/coffee shop for the 25- to 35-year-old set is Dizzy Frishdon at No. 121 (the name is an amalgam of the street names Dizengoff, Frishman and Gordon. 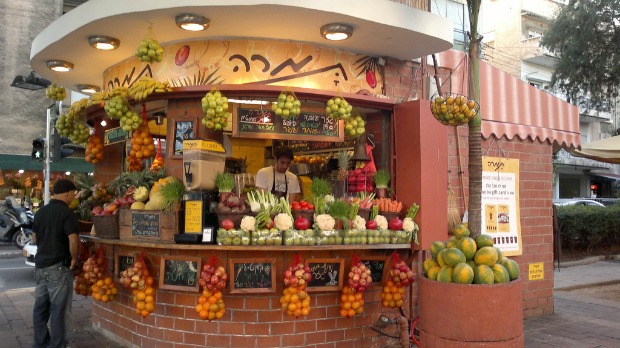 Tamara juice stand at the corner of Dizengoff and Gordon streets.

Other favorite watering holes are Mike’s Place (No. 342), Ilka (No. 148), Rosa Parks (No. 265) and MASH at No. 275 (MASH stands for “more alcohol served here,” not “mobile army surgical hospital”) incongruously situated directly across from the Great Synagogue of North Tel Aviv.

If your palate craves something non-alcoholic, visit the new, huge Le Palais Des Thes (No. 135) for boxed tea and tea accessories. Or hop over to the corner of Dizengoff and Gordon streets to sip fresh juices at Tamara (No. 171) and the playfully named Shake Gurion just across the street.

UNCOVER ISRAEL - Get the ISRAEL21c
Weekly Edition free by email
Sign Up Now!
Bring Israel's story to life.
Millions of people around the world rely on us to gain a deeper understanding of Israel. We are the trusted source for original content you won't find anywhere else.
You can make a difference. Donate today to support journalism that brings Israel’s story alive.
SUPPORT ISRAEL21c
Read more on:   Dizengoff Center, Dizengoff Street, Tel Aviv, Travel, Art in Israel, Nightlife in Israel, Shopping