The Immortal Piano of Siena, up for auction in Israel. Photo courtesy of Winner’s Auction House

They call it “The Immortal Piano of Siena.”

Italian harpsichord maker Sebastian Marchisio started building it in 1799 in Turin. The wood was claimed to be sourced from descendants of the Lebanon cedars that King Solomon used to build the first Temple in Jerusalem around 1000 BCE.

How did this rare instrument come to be up for auction recently in Jerusalem — a mere five kilometers (three miles) from the Temple Mount?

The story of the Immortal Piano is full of mysteries.

Marchisio managed to complete only the resonance box before his death, so his son and grandsons finished the project around 1825. The instrument was described as having a sound at once delicate like a harpsichord and powerful like a piano.

Rebecca, Sebastian’s granddaughter in Siena, received the piano as a wedding present. According to the auction house, “The piano became very famous there, as it was frequently featured at festive events in the city. Toward the 1860s, the marquis of Siena ordered a more magnificent appearance to be given to the piano.”

Rebecca’s son, sculptor Nicodemo Ferri, and his cousin, architect and painter Carlo Bartolozzi, were commissioned to produce the piano’s magnificent frame and cover.

Their design includes portraits of Mozart, Handel and other composers. At the center, they carved images of David’s harp, lions and cherubs. They also added a staticofone, an iron-reinforced frame, to enhance the sound. 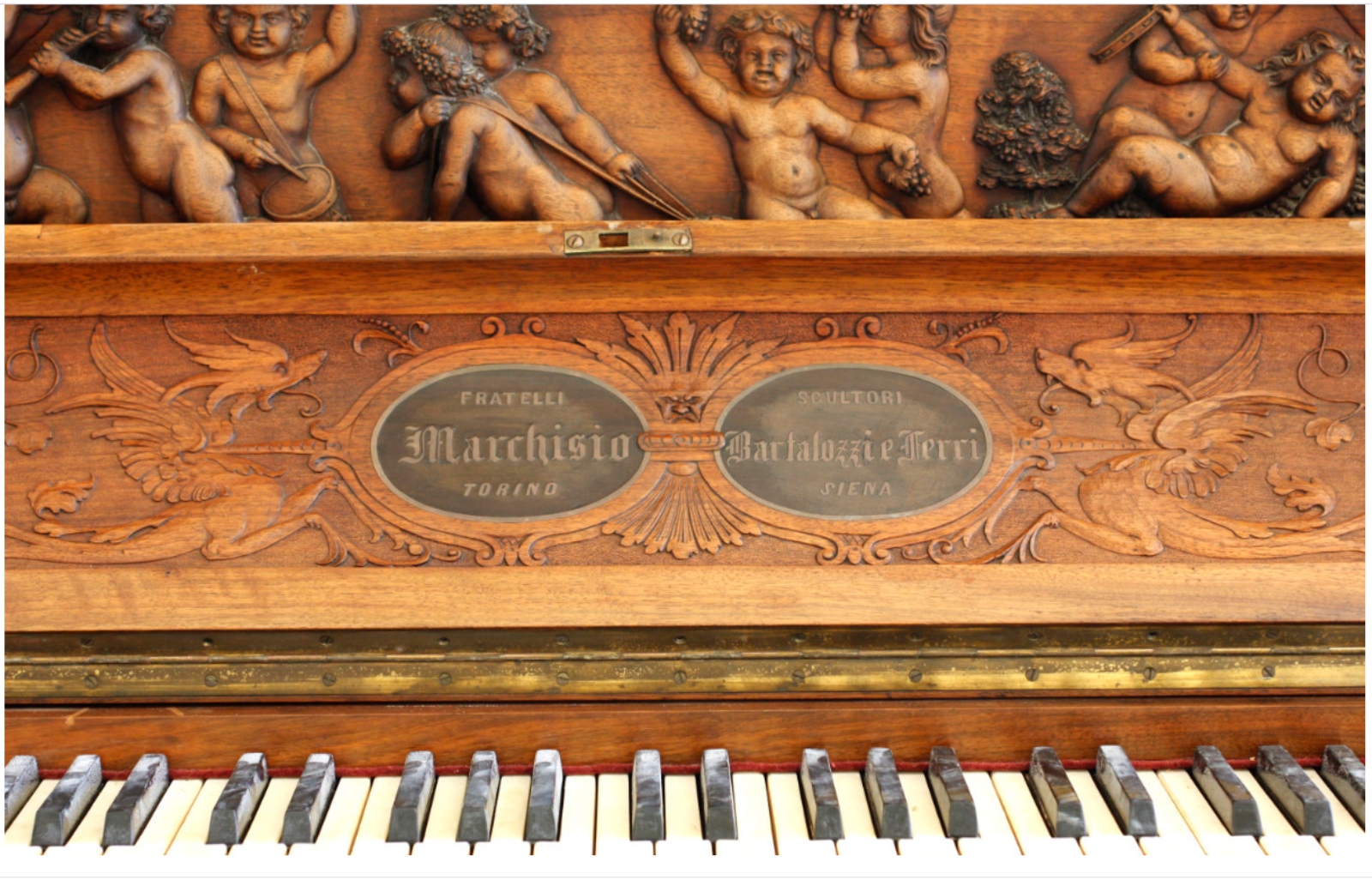 A close-up of the Immortal Piano made in Italy of Lebanon cedarwood. Photo courtesy of Winner’s Auction House

In 1867, the refurbished piano was exhibited in the Italian Pavilion of the World’s Fair in Paris. A year later, the city of Siena gifted it to Prince Umberto I on his marriage to Margherita, Princess of Savoy.

Famed pianist Franz Liszt played it at the wedding ceremony.

After Umberto was crowned king of Italy in 1878, the instrument occupied a place of honor at the Quirinale Palace in Rome for approximately the next 70 years.

During the late 1880s, King Umberto invited pianist Mattis Yanowski, a Jewish refugee from Czarist Russia, to tickle the ivories of the piano Umberto had nicknamed “David’s Harp.” However, Umberto was assassinated in 1900, before Yanowski had a chance to do so.

“On his deathbed, Yanowski extracted a promise from his grandson Avner Carmi, one of the first piano makers and tuners in the Land of Israel, to go see the legendary piano in Rome,” according to the auction house.

Carmi tried several times to get into the palace to see the piano but never succeeded. Once, he was even arrested by the guards.

“Carmi was drafted to the British army during WWII, and he served in Egypt. One day [in 1942], soldiers from his unit who were searching for mines using metal detectors, discovered a plaster-covered piano buried in the sand, and brought it with them,” goes the narrative.

How the precious instrument got there is anyone’s guess.

The unit’s officers wanted to discard the piano, but Carmi – who still didn’t realize that this was the piano he had been searching out for so many years – convinced them to hold onto it as a means to entertain the soldiers.

After the war, a Tel Aviv dealer bought the piano at an auction in Gaza City. Carmi purchased it from the dealer for next to nothing and began refurbishing it.

Only when the carved cherubs began reappearing from under the plaster did he realize that this was the legendary piano he had been searching for. 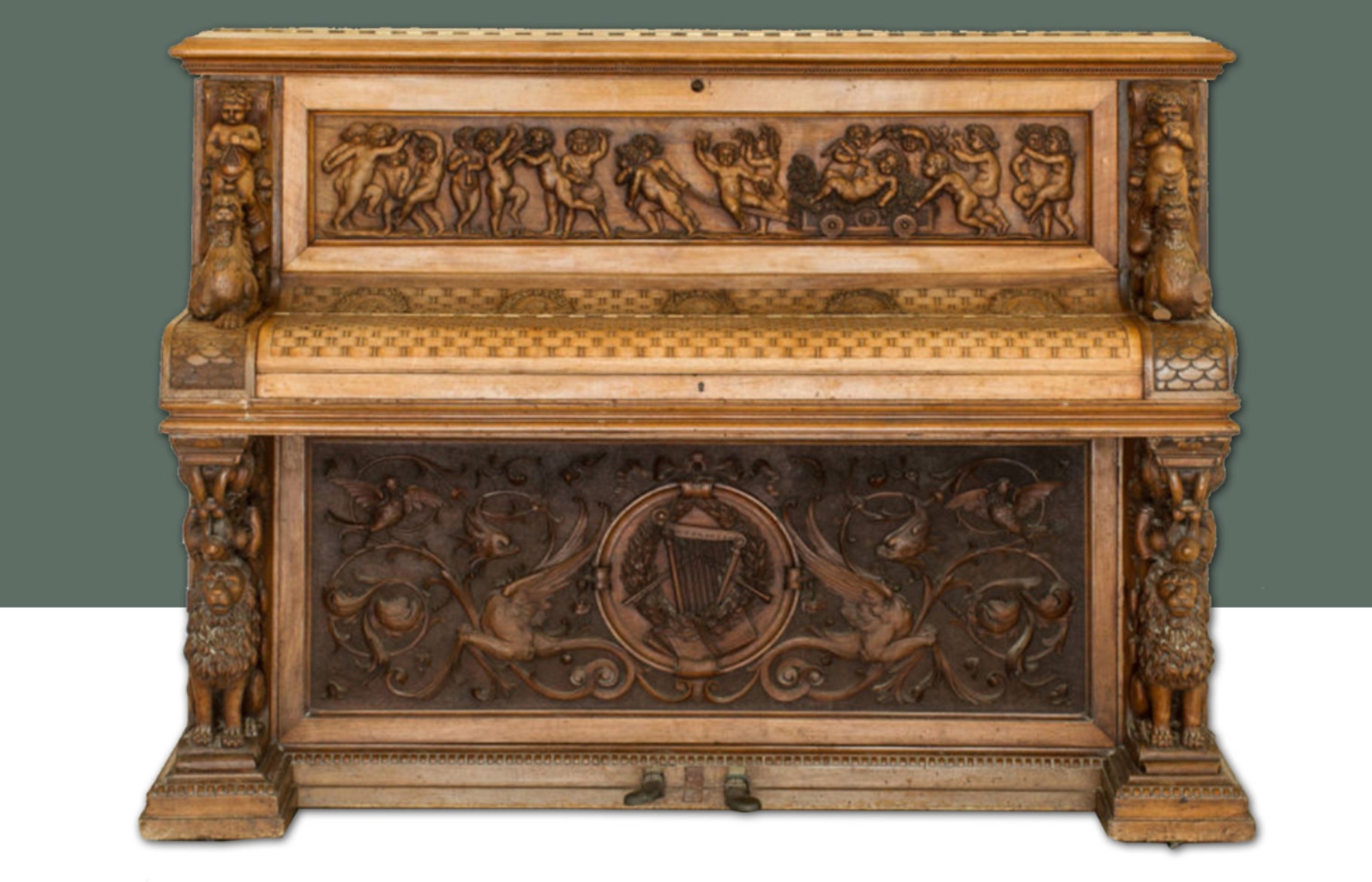 The Immortal Piano of Siena found its way to Israel under mysterious circumstances. Photo courtesy of Winner’s Auction House

Carmi painstakingly restored the instrument’s exterior over the next three years. He then took it to the United States to have its original special sound restored.

The embellished piano was displayed in New York’s Steinway Hall, where noted pianists including Arthur Rubinstein and Penina Saltzman had an opportunity to play it. It was used for recordings in the 1950s and 1960s.

Carmi and his wife wrote a book about the instrument called The Immortal Piano.

“There was an attempt to produce a movie about it, but Avner Carmi passed away before this idea was realized. Carmi’s children eventually sold the piano to a private collector,” the auction house relates.

That collector, reportedly an Israeli businessman in Caesarea, put it up for auction through Winner’s Auctions. The suggested leading bid was $85,000. But it had no takers when it was offered on the night of March 3.

“We believe the coronavirus affected the piano sell,” Winner’s CEO Gal Wiener tells ISRAEL21c. “We will wait for a few weeks and there is a good possibility that we will find a buyer for this great piece.”