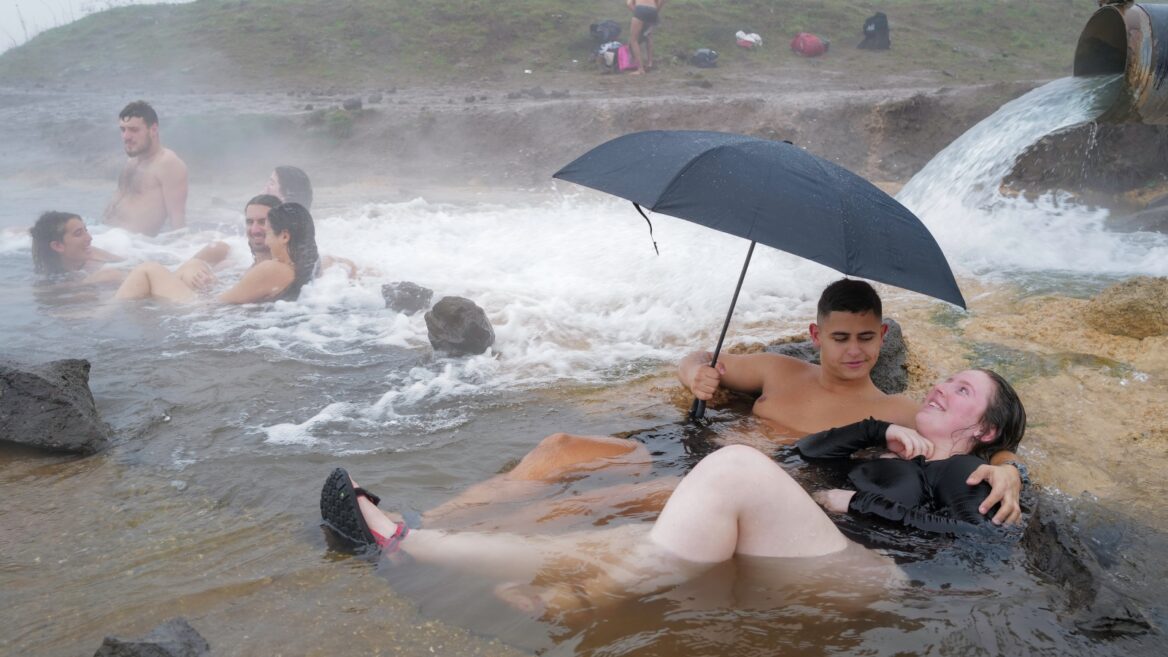 Israelis enjoy a winter day in the hot springs at Bental water reservoir in the Golan Heights. December 23, 2021. Photo by Michael Giladi/Flash90

In 2015, the total demand for water in Israel rose to 2.2 billion cubic meters (BCM), yet its average yearly enrichment of natural water into Lake Kinneret (Sea of Galilee) and its three main aquifers amounted only to 1.2 BCM, presenting a natural water supply deficit of 1 BCM.

Thanks to decades of pioneering innovation and development of water-saving technologies and artificial water production, Israel successfully filled that gap and then some, becoming – in the last few years – one of the world’s leading contributors of water technologies and management.

As the effects of human-induced climate change steadily trend upwards, however, water conservation policies will remain paramount for Israel and its neighbors.

Between continuous population growth and increasing standards of living, Israel’s annual demand for water is expected to reach 3.5 BCM by 2050, which will prompt a yearly natural water deficit of 2.4 BCM––more than twice the gap that existed in 2015.

To avoid a resurgent water crisis, Israel will have to augment its water conservation technologies, reinforce progressive regional cooperation, and adjust consumption patterns.

According to a 2021 report from the Israel Innovation Authority and its innovation climate-tech community PlaneTech, there are nearly 150 early-stage startups and established companies dedicated to eco-efficient water infrastructure development.

“Although Israel has a great reputation of desalination and water reuse, the water tech ecosystem is not as financially strong compared to other climate-tech categories,” says Uriel Klar, director of PlaneTech.

“The water industry in Israel is a mature sector and has already solved 90 percent of the problems that used to be common. That’s one of the main reasons why the water-tech sector receives less financial investment compared to other younger sectors such as climate energy systems and sustainable mobility and transportation, which have much more room to grow.”

However, Klar remains optimistic that Israel can build on the reputation it has established thus far, using artificial intelligence (AI) to move the climate-tech sector ahead.

One of the most significant areas where AI is being applied in Israel’s water-tech ecosystem is leak detection. In most countries, an average of 30% of treated water is lost to leakage before it reaches its destination.

In Israel, this figure hovers closer to 7 or 8 percent due to the growth of its leak detection companies but also because its water-carrying infrastructure is relatively young. Here, the use of AI cuts time and costs, and most importantly, locates problems before or very soon after they occur.

Israeli-based companies like Asterra (Utilis) use a combination of AI and satellite-based technology to locate and assess the presence of underground moisture over an area of 3,500 kilometers at a time without having to physically break ground.

Leaks from infrastructural pipes take an average of 18 months to surface, and by the time they do, substantial volumes of water are already lost. In fact, Utilis estimates that nearly 64 billion liters of water around the world are lost every day to leaks. Utilis’ inventory of Asterra products use a host of AI technologies to, among other things, analyze aging pipe systems and deliver monitoring data to water industry managers to address maintenance issues before or quickly after they arise.

WINT Water Technologies specializes in identifying leak detection in buildings using an AI device system programmed to distinguish between normal and abnormal flow patterns from water meter data. In the event of an unnoticed leak or malfunctioning pipe, WINT’s devices automatically send an alert to water operators notifying them to shut off water until repairs can be made.

The Israeli government has committed to achieve a net reduction in greenhouse gas emissions of 27% by 2030 and 85% by 2050 relative to 2015 emission levels.

But scaling Israel’s renewable energy has been hindered by bureaucracy. By the end of 2020, Israel only managed to generate less than 6% of its electricity from renewable sources, falling short of a modest goal of 10%.

Part of this has to do with Israel’s large natural gas reservoirs, which present enticing short-term benefits for its energy economy. The other part has to do with the 50,000 dunams (more than 12,000 acres) Israel lacks to achieve its 30% renewable energy share by 2030.

What does this have to do with water conservation? Simple. Israel can leverage its water conservation capacity to make good on its renewable energy targets while simultaneously fostering peaceful geopolitical relations in the region.

The country’s breakthroughs in drip irrigation, wastewater reclamation and desalination indicate that Israel could secure a surplus of water that can be traded to neighboring Jordan, a country with ample land availability, in exchange for clean electricity derived from solar energy.

This very transaction was one of four objectives proposed in 2020 by nonprofit organization EcoPeace Middle East in its Middle East Green Blue Deal plan. 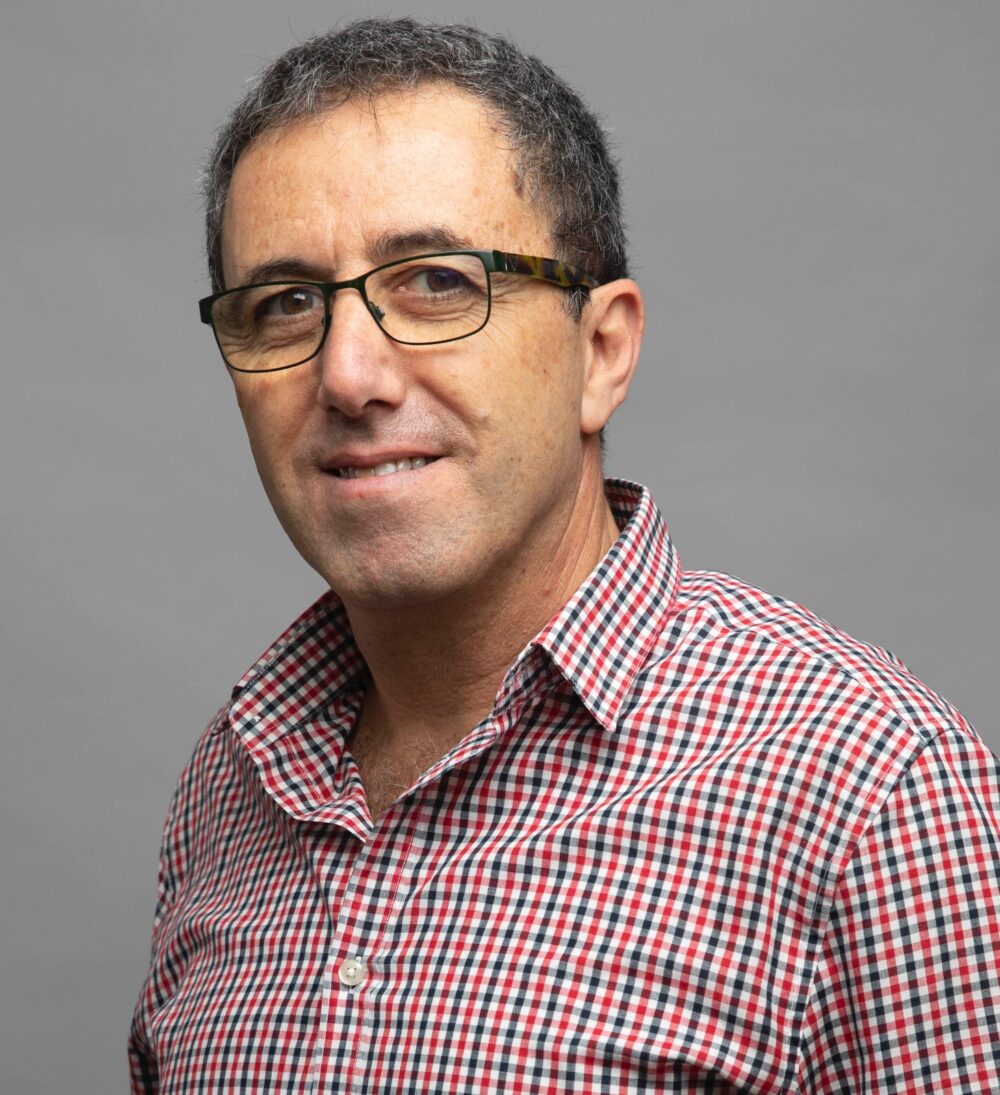 “Even though Israel is a world leader in water conservation, there’s still a lot that Israel needs to do,” says Gidon Bromberg, Israeli director of EcoPeace Middle East.

Regional cooperation, he says, is “critical in order to build the adaptive capacity not only of Israel but the region as a whole to withstand the climate crisis that we are already in the midst of. Climate resilience is not achieved by one party alone. The climate crisis impacts a region, not just one country.”

Today, Jordan produces solar-derived electricity at under 3 cents per kilowatt hour, while in Israel and the Palestinian Authority territories electricity is sold at 10 cents per kilowatt hour or more. At the same time, Jordan lacks the convenient access that Israel has to seawater for desalination, and pumping desalinated water from the Mediterranean coast is much cheaper than pumping from the more distant Red Sea. Here, both sides have a comparative advantage.

“It’s not a matter of doing a favor, it’s a matter of self-interest and mutual gain,” Bromberg explains.

In 2021, EcoPeace’s water-energy nexus proposal was agreed on by Israel, Jordan and the UAE, which brokered the deal. Emirati government-owned firm Masdar will construct a large solar energy facility in Jordan that will begin producing emission-free electricity for Israel by 2026. In exchange, Israel will send 200 MCM of desalinated water to Jordan annually alongside a yearly payment of $180 million to Masdar, which will split the proceeds with Jordan.

Not only does this deal quadruple the current amount of water Israel already provides Jordan, but it also contributes, albeit modestly, to Israel’s goal of growing its renewable energy sector and electrifying its energy-intensive water treatment and desalination facilities with emission-free electricity.

EcoPeace wanted to include the Palestinians, but historical tensions and a desire to make a deal that satisfies all needs at once prevented them from cooperating despite the severe intermittent water availability they experience.

“Technology and Israel’s leadership in the governance of water has been a real gamechanger,” says Bromberg. “But what’s preventing this solution from moving forward is the paradigm of an all-or-nothing approach towards alleviating the political issues between Israelis and Palestinians.”

Breaking the paradigm, as Bromberg explains, “can not only reduce an issue of animosity but also improve the situation on the ground. More water improves lifestyles and creates economic opportunity, particularly if its water for agriculture or for industry.”

It all comes down to consumption

“Five or six years ago, the water demand per person was less than it is today. That means each Israeli is actually consuming more water partly because there is a lack of understanding that water is still a really scarce and valuable resource,” Bromberg points out. 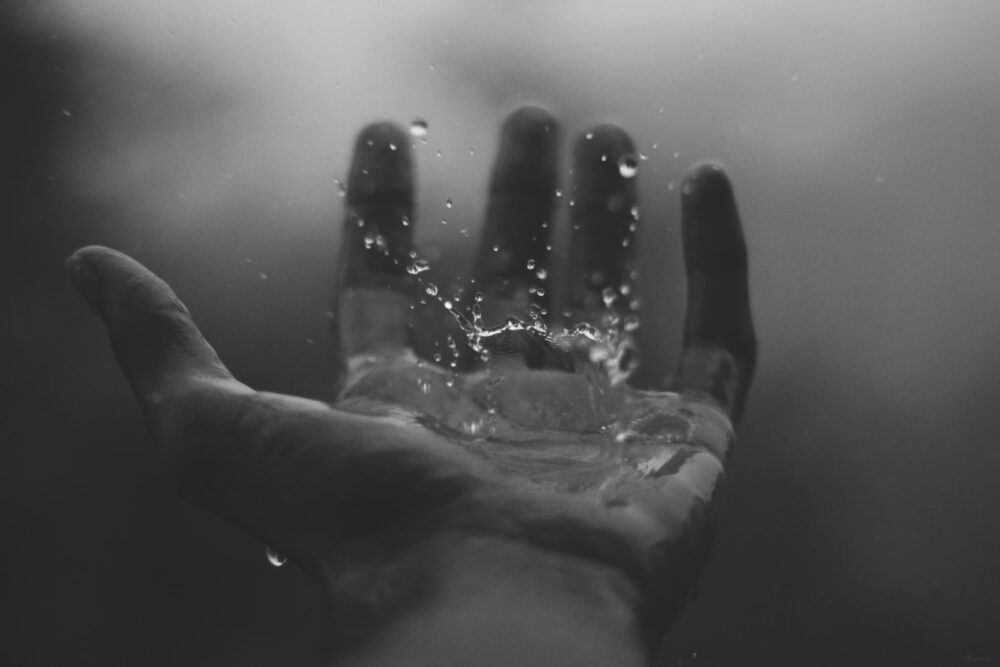 Photo by Geetanjal Khanna on Unsplash

While education campaigns from Israel’s Water Authority circulated throughout the 2000s, they ultimately stopped airing in the wake of improved water supplies from the country’s diversified technologies and large-scale wastewater and desalination facilities.

“Those messages were very clear that this was short-term, that we only need to conserve now until desalination comes into play, and we think that is a mistake,” says Bromberg. “We should always be promoting the smart utilization of resources because we can’t desalinate from the sea as if there’s no implications.”

He’s right. While desalination does extract ample amounts of drinkable water from seawater, it also produces brine, a highly concentrated salt solution byproduct, which is often dumped back into the Mediterranean Sea prompting negative implications for coastal and marine ecosystems.

Relying on desalination is therefore not the preferred primary course of action, according to Bromberg, who advocates that it should instead be a last resort due to its high financial costs, high energy demand and environmental implications.

“If we continue on the same path that we’re on today, some figures speak about the need to build a new desalination plant every three to five years on the coast of Israel [to account for] increased population and increased demand,” says Bromberg.

“When we’re looking towards the future, we need to break the connection of growth and increasing water consumption. We’ve done it in the past, and we need to do it again in order to be as sustainable as we need to be.”

UNCOVER ISRAEL - Get the ISRAEL21c
Weekly Edition free by email
Sign Up Now!
Bring Israel's story to life.
Millions of people around the world rely on us to gain a deeper understanding of Israel. We are the trusted source for original content you won't find anywhere else.
You can make a difference. Donate today to support journalism that brings Israel’s story alive.
SUPPORT ISRAEL21c
Read more on:   Environment, Technology, Water conservation, Desalination, EcoPeace Middle East, Water Conservation Exhibition, water crisis