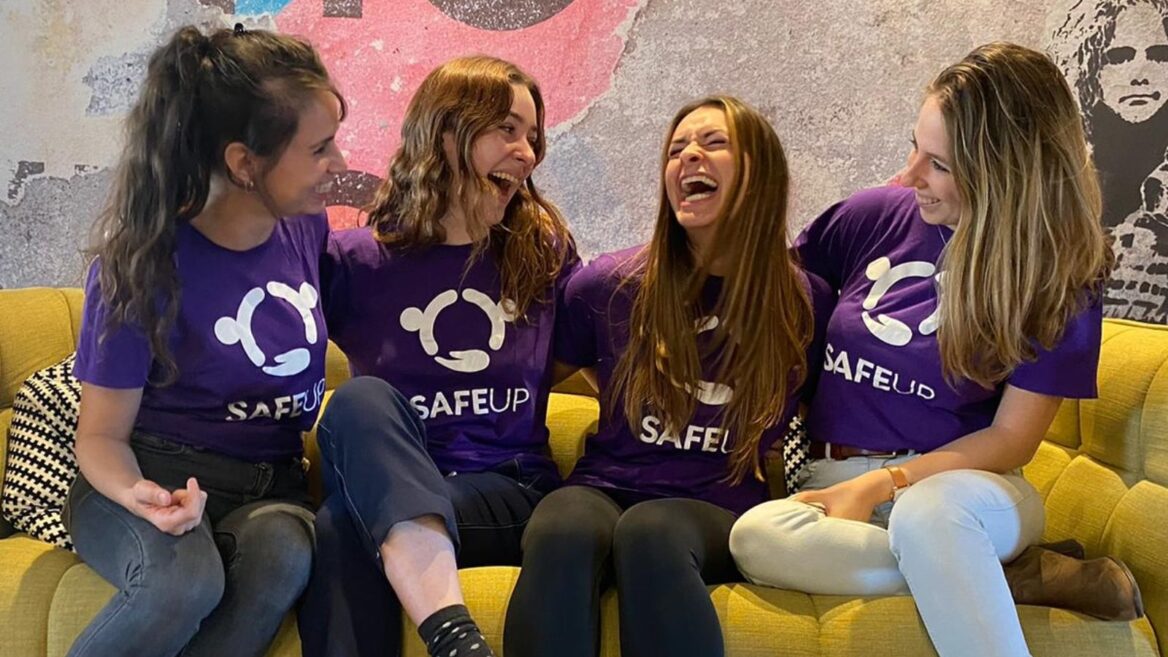 Neta Schreiber Gamliel, SafeUP’s co-founder and CEO (left), with some of the startup’s employees and volunteers. Photo courtesy of SafeUP

Unfortunately, almost every woman on the planet is familiar with the uncomfortable sensation that sometimes accompanies walking alone. It doesn’t matter if it’s in broad daylight or in the middle of the night, right near home or in an unknown area – quite often, the seemingly simple procedure of making our way somewhere leaves us full of trepidation.

An Israeli app called SafeUP was developed to combat this situation. It enables women to log on and be virtually or physically accompanied to their desired location by a trained volunteer, feeling secure in the knowledge that there’s safety in numbers.

The idea for the app came to its cofounder and CEO, Neta Schreiber Gamliel, after an unpleasant experience.

“Around 10 years ago, Neta was at a house party and at some stage she noticed that one of her friends was missing. She got together a few friends and together they went looking for her,” says Noa Toder, SafeUP’s Head of Growth.

“At the end of the search, which took quite a while, they found her upstairs, wrestling two guys. She then understood the power of numbers and how much it helps to have someone with you in an uncomfortable situation.”

A few years later, in 2019, Schreiber Gamliel established SafeUP on these principles.

A rendering of a video call available to users of the SafeUP app. Image courtesy of SafeUP

“The idea was to create a network of women who are there for one another for any situation that leaves you feeling less than confident,” Toder explains.

“Whether it’s a concrete situation in which someone is following you down the street, or something more abstract, such as when you walk alone at night in an unpleasant area or one that you don’t know. With the push of a button, the app enables you to be in touch with women in your surroundings.”

The app was launched six months ago after a pilot project in cooperation with the Tel Aviv municipality, and so far has some 60,000 users in Israel, the US and the UK, as well as smaller communities in Hungary and Poland. Most of the users are aged 14 to 35.

To join the SafeUP community, women register and undergo verification to ensure their credibility. They can then open the app to see where nearby “guardian” users are, give them a video or telephone call or request that someone come to accompany them.

The guardians are app users over the age of 18 who underwent video-based training provided by SafeUP. They learn how to assess situations, what questions they need to ask end users and how to respond to different situations.

Usually, it is enough to simply be there for the woman dialing in and to lend an ear, but in around 5 percent of the cases guardians end up arriving on site — in groups of two or three women, so as not to endanger themselves.

Toder notes that in many cases, users don’t even make calls to guardians, feeling safer just by keeping the app open on their phone.

“We see more and more of our users using the app in ways that we didn’t think of before,” she notes. “For example, there are a lot of users who wouldn’t dream of going jogging in the dark because it frightens them, but now, with the app, they have more confidence.”

SafeUP’s solution, Toder says, is unique on two fronts. First, it focuses solely on women, as opposed to other products geared toward the wider population. Second, it’s based on community resilience, which gives users a faster and more effective solution than something such as a panic button.

An illustration showing how users can share their location on SafeUP. Image courtesy of SafeUP

“We offer you a very large deployment of all the guardians in your area,” Toder says. “We can very quickly connect you with someone in your area who can come to you and help you feel safer.”

The app is available on App Store and Google Play in both Hebrew and English, with plans for more languages as the startup wishes to reach as many women as possible.

“As with anything that is network-based, the larger the network, the more effective the solution,” Toder concludes.

“The big goal right now is to enlarge the communities and reach all sorts of places around the world. The most important thing is that as many women as possible download the app.”