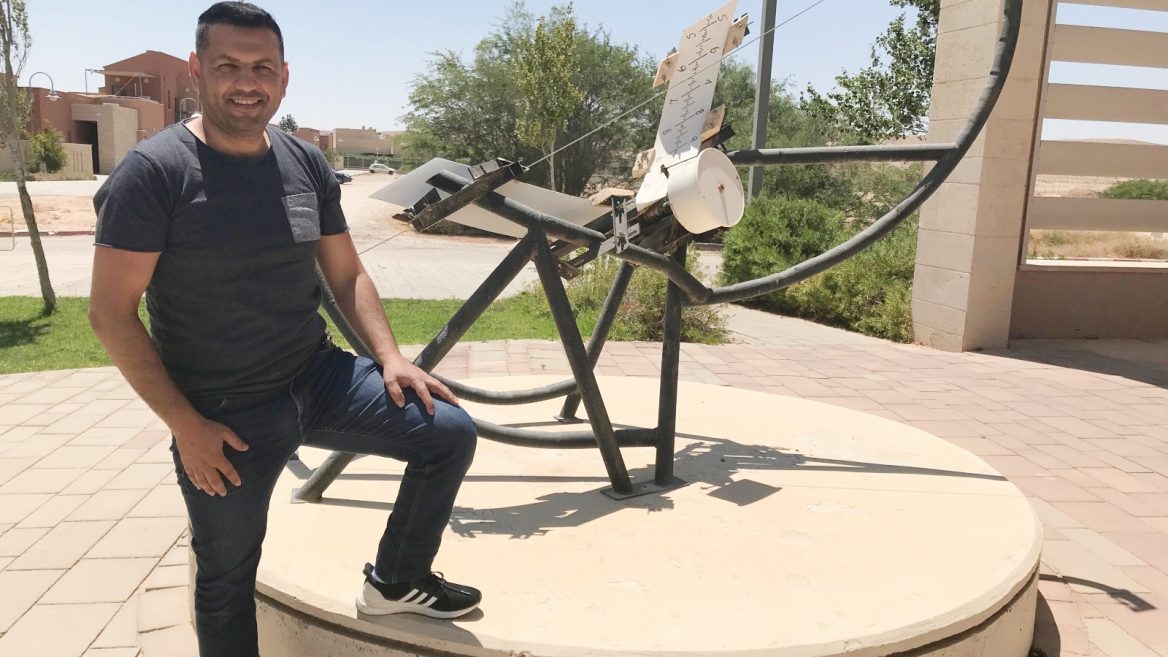 If you isolate a single molecule of a conductive metal, can it conduct energy all by itself? That question nagged Muhammad Bashouti in high school and stumped his science teacher.

Actually, an Israeli researcher at the Weizmann Institute of Science had found the answer (a resounding “yes”) several years before Bashouti was born in 1977. But it wasn’t yet public knowledge. So, this inquisitive son of a Muslim Galilee farmer made the correct assumption that every molecule does contain some of the properties of the whole. And he set out to determine how individual molecules of conductors, semiconductors and insulators could help humanity.

Along the way, he discovered something extraordinary: He could harness the properties of molecules to turn them into tiny smart devices that do tasks faster, better, at lower cost, using less energy and materials than do existing digital devices powered by transistors and diodes.

His most advanced molecule-based inventions include:

Bashouti is working toward commercialization of these innovations through BGN Technologies, the university’s tech-transfer company. In the newest development, a Chinese company plans to prepare a prototype of his molecular solar cells.

Recently, ISRAEL21c spent a day with Bashouti at Ben-Gurion University of the Negev. He is assistant professor of solar energy and environmental physics on the Sde Boker campus and at the Ilse Katz Institute for Nanoscale Science & Technology on the Beersheva campus.

He also heads a nanotechnology lab at the Swiss Institute for Dryland Environmental and Energy Research at BGU’s Jacob Blaustein Institutes for Desert Research in Sde Boker.

Switching between campuses and languages over the course of the day – he speaks Arabic, Hebrew, English and German — Bashouti supervises 10 Israeli and international graduate students (including postdocs) plus two lab technicians and two visiting scientists.

They use sophisticated machines, some custom-made, to work with and observe the behavior of molecules too minuscule to see or manipulate. 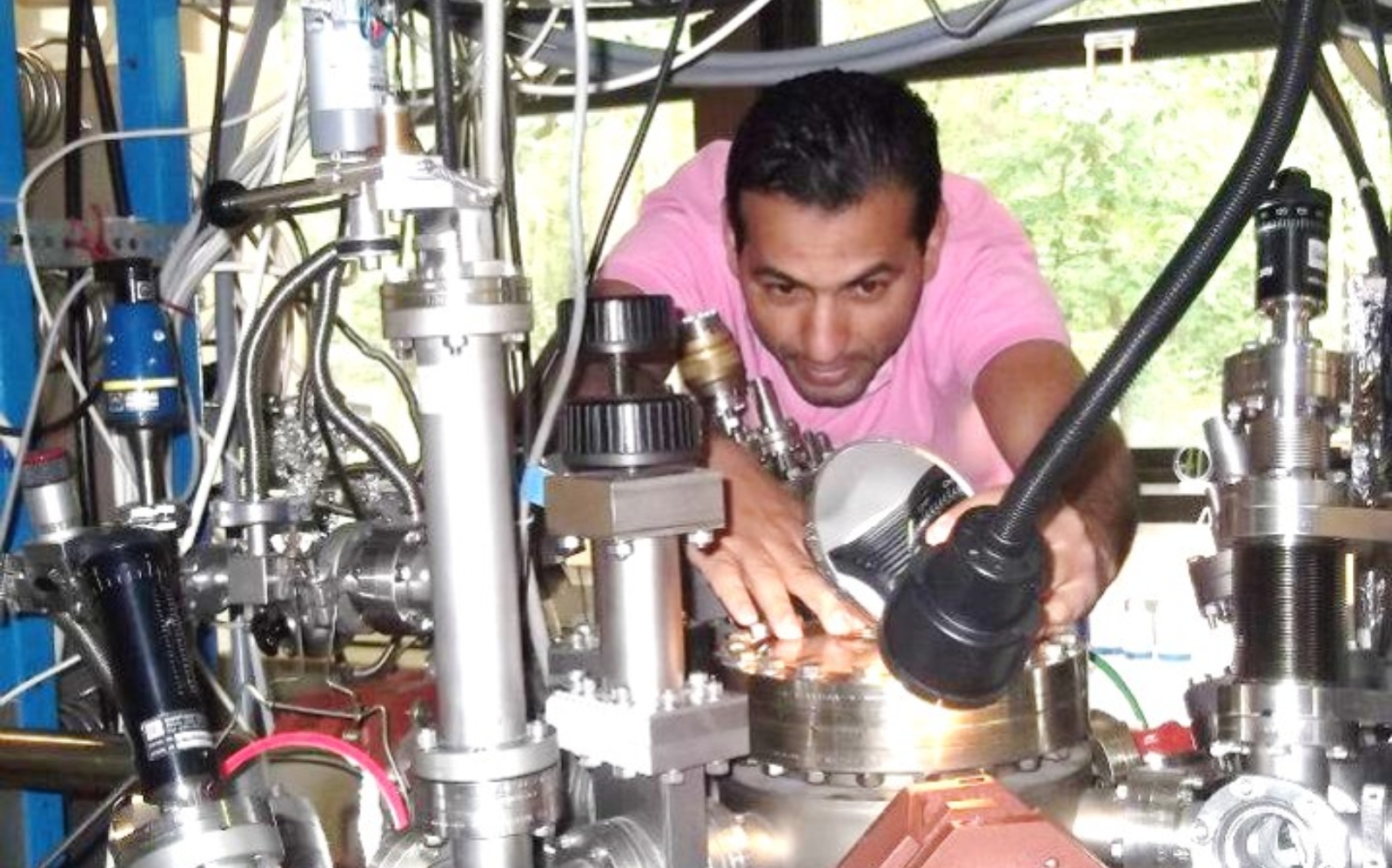 “A molecule is very, very small. I cannot handle it. I started to think of how I could take molecules from a solution or from the air and graft them onto a surface I can hold,” Bashouti explains. 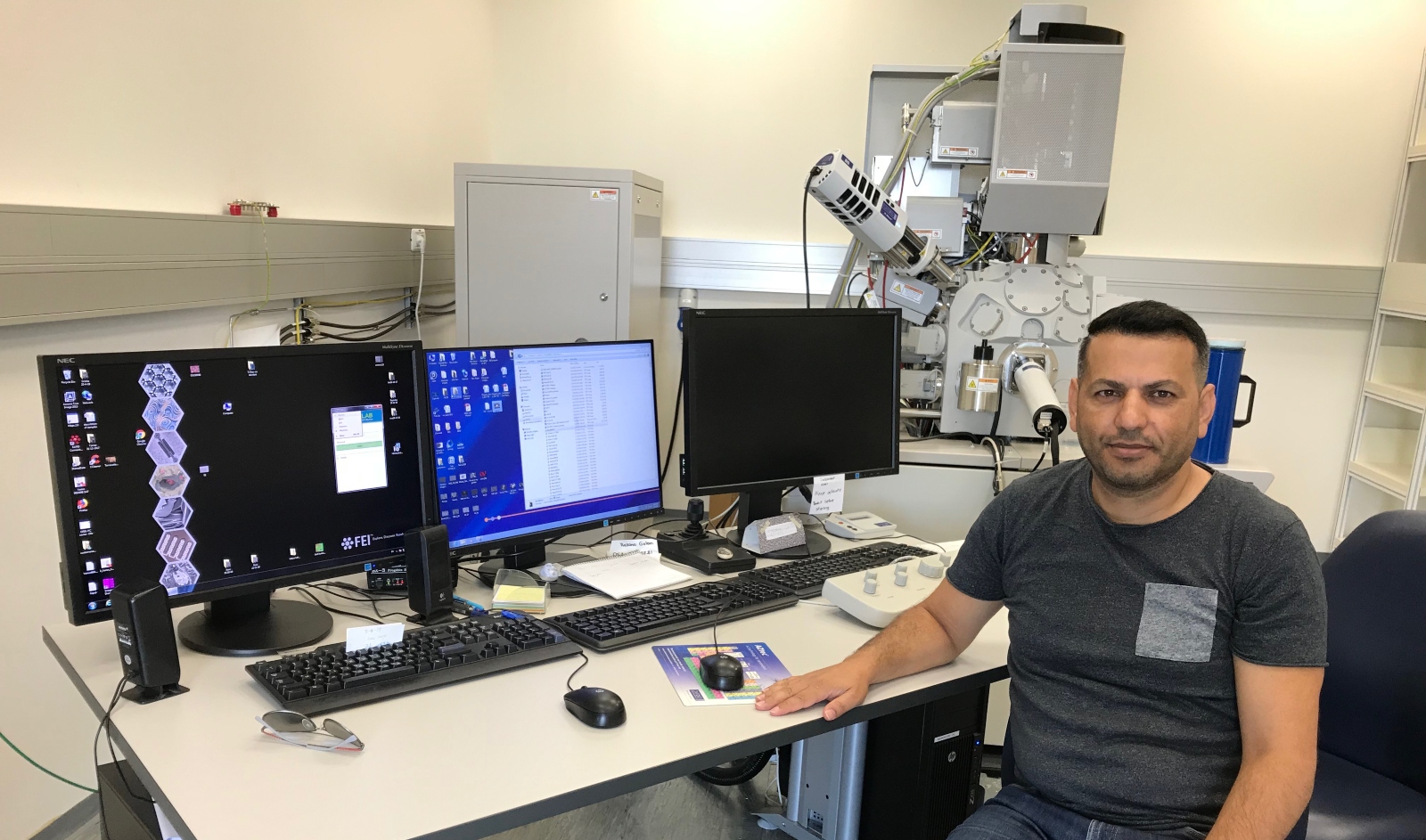 Prof. Muhammad Bashouti with the scanning electron microscope at Ben-Gurion University, which shows the composition of materials down to the level of one nanometer, equaling about 10 molecules. Photo by Abigail K. Leichman

Bashouti explains that when a graffiti artist paints on a wall, the image interacts only with viewers, affecting their mood without fundamentally changing the wall.

When his team “paints” molecules (usually the hydrocarbon CH3, the smallest organic molecule) on a surface (usually silicon, the semiconductor in all smart devices), the molecules interact with the surface.

The electronic, optical, magnetic or conductive properties of the surface are changed depending on the type, number and position of the molecules placed on it.

“The basis of all the applications we do in our labs is molecule-surface interaction,” he says. 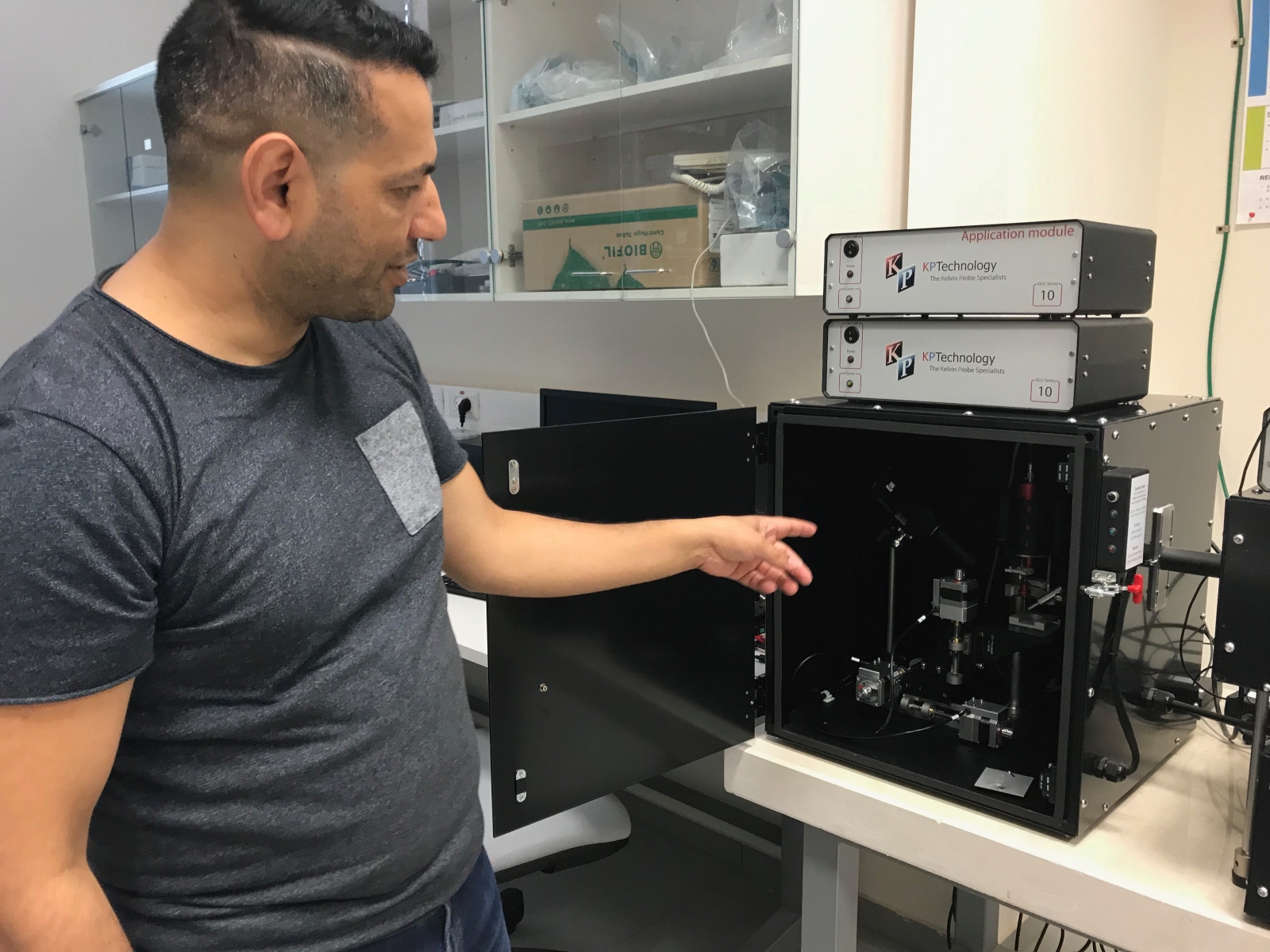 Prof. Muhammad Bashouti with a Kelvin Probe to measure the energy potential of molecule-embedded surfaces at every point. Photo by Abigail K. Leichman

Bashouti’s multidisciplinary team includes a chemist to bond the molecules to the surface; a physicist to check the bond; an electrical engineer to operate the nanodevices; a theoretical physicist to analyze the energy transfer between molecules and surface; and a biologist to decide where to place the molecules on the surfaces for the desired effect.

“We do a lot of basic science in Beersheva and all the development of devices is done at Sde Boker,” explains Bashouti, who has published numerous papers in prestigious journals. 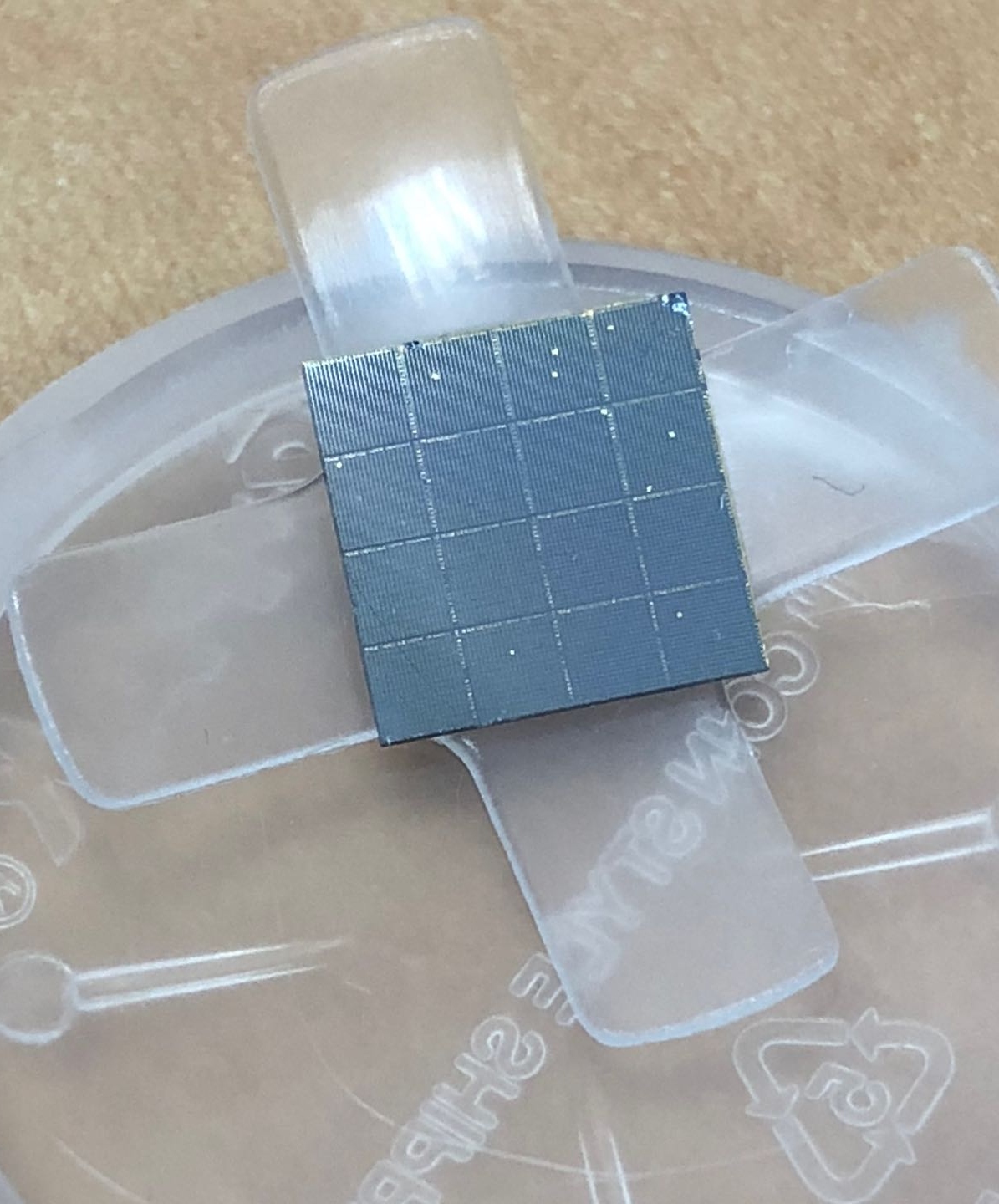 He has consulted regularly with molecular electronics pioneers Mark Ratner and Arieh Aviram, who in 1974 had the basic answer to Bashouti’s schoolboy query.

Since then, Bashouti and his team have discovered that molecules can be enhanced with additional properties they don’t have intrinsically. That will make possible such nifty inventions as optical switches composed of molecules enhanced with light-absorbing properties.

One of Bashouti’s PhD students, chemical engineer Awad Shalabny, is working to make each molecule-surface chip absolutely uniform. That’s not simple because molecules don’t always remain stable and if they’re not placed on the surface in the exact same way every time, each chip will behave differently.

“We can only move forward when the molecules are stable,” says Shalabny. “To overcome this problem, we found we can modify the surface to control the properties we want.” 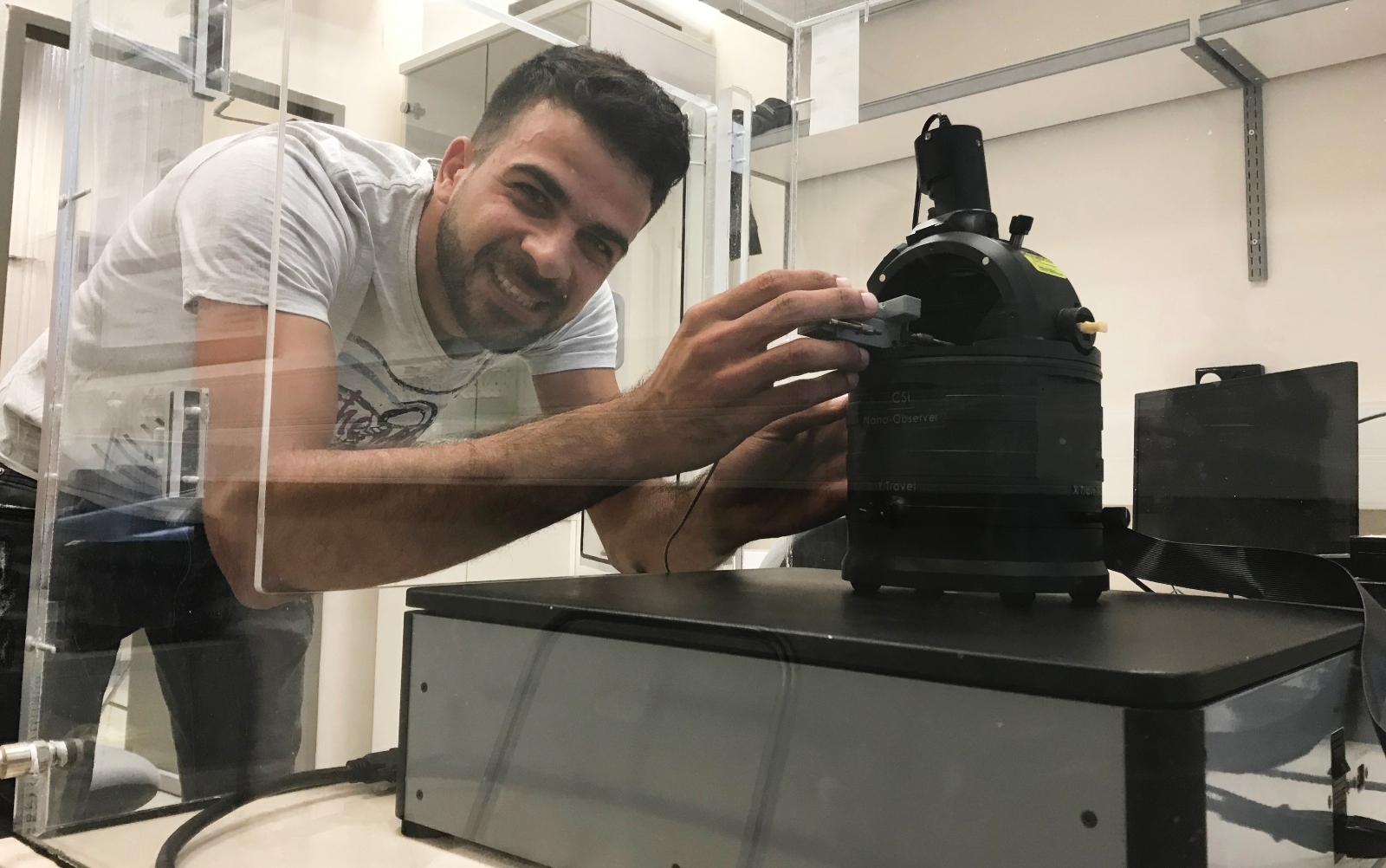 Master’s student Tabea Heckenthaler, a physicist from Dusseldorf, is working on a problem anybody can easily understand: “In the desert, dust accumulates on the surface of solar cells and it’s tedious to clean them constantly,” she says. “In nature we see that certain plants, like the lotus leaf, are self-cleaning and we’re trying to mimic this behavior on a solar cell.”

Like Shalabny, Heckenthaler is modifying silicon surfaces. In her case, she’s changing its topography to resemble that of a lotus leaf “so that when a water drop rolls down the surface it takes away all the accumulated dust particles.” 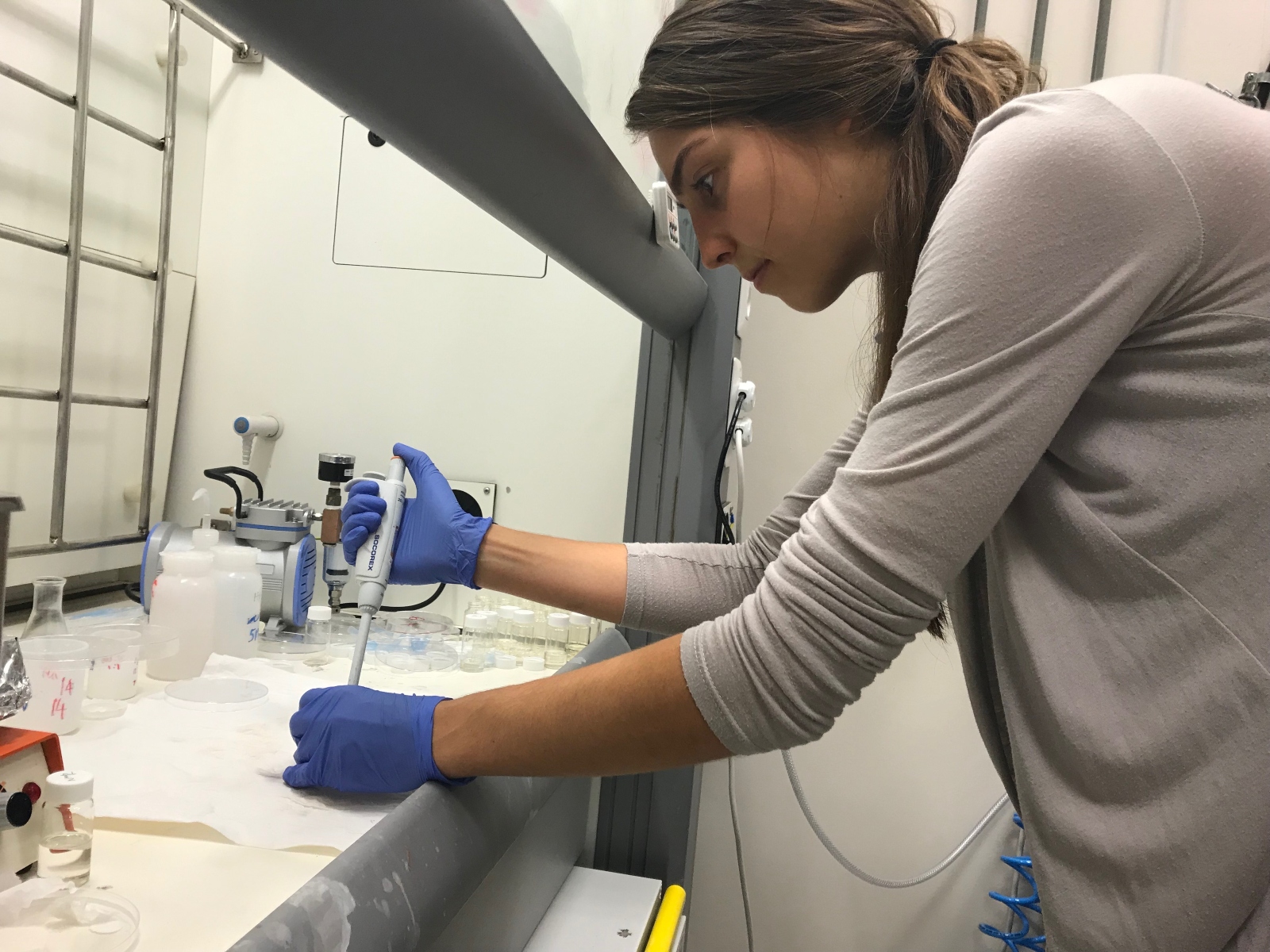 The possible applications for Bashouti’s molecular chips are virtually endless, ranging from clean energy to telecommunications to medicine. One project is looking at how the molecules can split water to get hydrogen gas energy and fast-charging batteries.

Frequently traveling to conferences and potential partners around the world, Bashouti has come a long way from his modest Galilee roots, but he certainly hasn’t forgotten them.

He credits his father and his mother, a self-educated homemaker, with instilling in their seven sons a thirst for knowledge and a respect for people of all religions and cultures.

Accordingly, Bashouti takes time from his packed schedule at BGU and from his private time with his wife and baby to volunteer with Tipa Bamidbar (A Drop in the Desert), a BGU-sponsored program encouraging Bedouin high school students in the Negev to pursue higher education.

Perhaps one day, some of these students will join in the exciting work of turning molecules into smart devices.