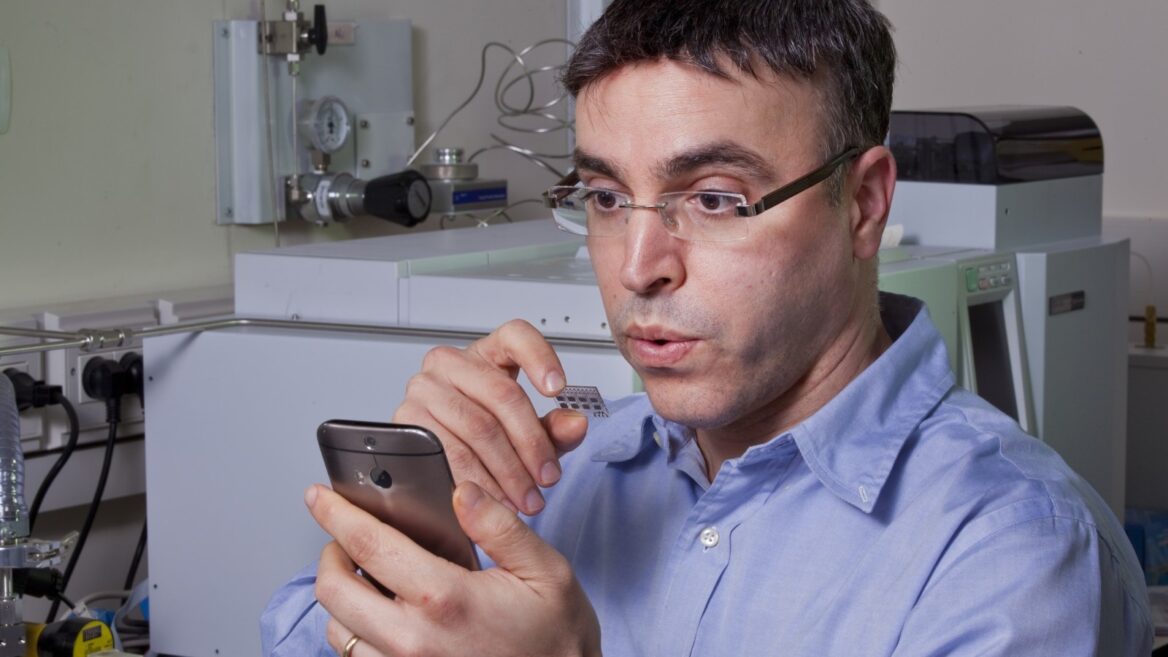 Hossam Haick, a professor at the Technion Israel Institute of Technology and an expert in the field of nanotechnology and noninvasive disease diagnosis, began our interview with a story about his older son, Fadi, now 13.

When Fadi was a little boy, Haick recounted, he was afraid of water.

“But one day, my wife and I were at the pool in the Technion,” Haick, 47, continued, “and an older faculty member swimming in the pool — to this day, I don’t know his name — reached out his arms and Fadi went into the water with him. And that was how Fadi learned to swim.”

Since then, Fadi has become a competitive swimmer, winning numerous awards. Haick said that he will always be grateful for the unknown man who introduced his son to water.

And that idea of experimenting and trying new things is symbolic of Haick’s pioneering work.

“When I do research, I jump into the water and then learn how to swim,” Haick said.

With a black belt in karate, Haick has an aura of someone who is calm and softspoken, yet with a steely focus. With his 32-member team — a diverse group of scientists from around the world, including China, India and Russia — he has produced more than 42 patents and patent applications, many already licensed to international companies.

He has won grants, awards and recognition including a 2008 listing on the “World’s 35 leading young scientists” of MIT’s Technology Review.

He likes to imagine the impossible. Two of his most famous inventions are the SniffPhone, whose nanotechnology sensors analyze breath to detect certain kinds of cancers, and the NaNose, which can detect biomarkers for a variety of medical conditions.

Molecular zipper instead of sutures

But before explaining more about those inventions, Haick was excited to share the background information about one of his latest inventions.

“I saw the movie ‘The Terminator’ when I was a little boy,” Haick began, launching into his next story — the kind of story he used to read growing up in Nazareth with his four siblings. His family was poor, Haick said, but his parents always brought home books about inventors and leaders as inspiration.

“Six or seven years ago I saw the movie again.” Haick paused. “You know the story about the robot? Well, suddenly at 3AM I woke up thinking about the robot, and thought, ‘Why don’t we do self-healing for electronic devices?’

The next day, I called a post-doctorate fellow, Dr. Ning Tang, originally from Vietnam but now at the University of Texas in Austin, and told him, ‘I have something crazy for you.’ He said, ‘Great.’”

Haick said that electronic devices could not be fixed, and they couldn’t touch skin or blood. Tang created a polymer that could do all that.

Made from sulfur and nitrogen and arranged like a molecular zipper, the device can bind a wound, eliminating the need for sutures. It decreases infection. It is also a smart device, connected to a doctor’s computer.

On his laptop, he showed me a film of an electronic device floating in saltwater. A scientist cut the device in half, and then pressed the two pieces together. Unlike Humpty Dumpty, the pieces put themselves back together. Not only that, the scientist was able to stretch the device like taffy.

“He will keep stretching it,” Haick said, smiling up at me. “No worries.”

Another of Haick’s inventions is a wearable health-tracking device that can be applied like a temporary tattoo, “like the kind I put on my kids,” he said.

People place the device on the skin and apply a dab of water. They then pull off the adhesive backing, and the device remains, able to bend and stretch while converting motion and body heat into electric energy.

“There are electrodes and micro-needles in the device but they’re the thickness of a hair,” Haick said. “You don’t feel them. They are the sensors that monitor people’s biomarkers such as glucose, salt, latent tuberculosis, and even to check for dehydration.”

This noninvasive device could transmit this data to the user and the doctor.

“Did you know that between 20 and 40 percent of all medical diagnoses are incorrect?” Haick asked. “And 15% of all surgeries are done for the wrong reason. This is because of delayed diagnosis. We’re seeking to detect diseases while we’re still healthy. The survival rate will increase.”

Haick points out that these days, a physician might see 40 to 70 patients every day. “But if we have such a system, the doctor could see 70,000 patients just by having access to the data.”

“So, if you had a crystal ball will this device be commonplace in the future?”

“Yes,” he said without thinking twice. “Most people will wear one.”

“What is your focus for the next few years?” I asked.

“Do you know what a spectrometer is?”

I shook my head.

He showed me a photo of the machine. “It’s larger than one meter by one meter, weighs about 200 kilograms and costs a half-million dollars,” he said. “It’s a very complicated lab. You bring the sample of blood or urine to it and it separates mixtures into elements. You can’t bring it into the field.”

Then he drew squiggly lines and squares on a piece of paper and held it up for me to see. 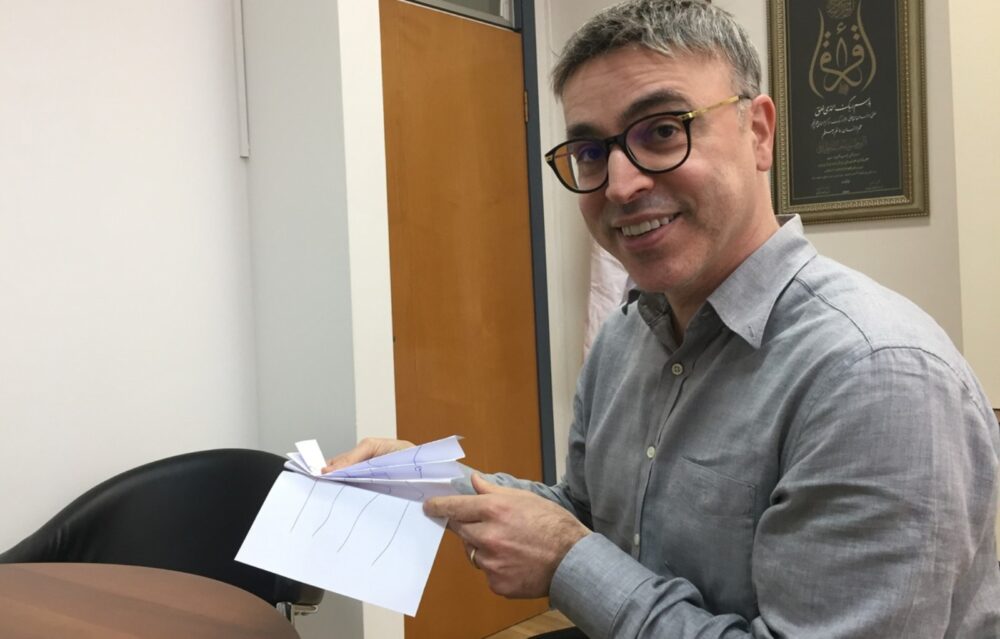 Prof. Hossam Haick in his office at the Technion in Haifa. Photo by Diana Bletter

“This invention is like origami,” he explained. “We have developed something that will do everything the spectrometer does but in the size of a credit card. It has 150 layers — of course it depends on how you fold it — and it will cost $20 to produce. The secret is what we put in the ink and how we do the folding. We write it on a piece of paper.”

“It is really crazy,” he said. “We have to think of a name for this device — we now call it a wearable lab. In the future, you will be able to stick this device on a building to detect a specific compound. For example, there’s a compound xylene. Above a certain threshold, it can cause cancer. It’s very difficult to collect and examine. But this device will be able to do that. In agriculture, you could detect infections in trees to monitor fungi or toxicity.”

The wearable lab “has huge potential,” he said, adding that he is certain he will find partners to develop it.

While he was just about done explaining this project, he went off on a tangent about another one of his team’s projects.

“There are 600 trillion cells in the human body and we are studying how they communicate with one another,” he said, placing one hand by his shoulder and another by his hip.

“From one part of the body to another, cells have a chemical language that they use. We’re studying that. If we can spy on that language, we can intervene in this communication and intervene with the treatment.”

In addition to his nanotechnology research, Haick now serves as dean of undergraduate students at the Technion.

He said that he has recently welcomed applicants whose academic grades “were not high but they had other qualities.”

“I find the spot of light and believe in them,” he said.

“Is that science?” I asked.

He added that he doesn’t believe in mistakes.

“There’s nothing called a mistake,” he said. “If you have a different perspective and different view, it can be an opportunity. That’s why I never say to someone, ‘You are wrong.’ I say, ‘I have a different opinion.’”

He and his wife, Rana, a chemist and food engineer, live in Haifa with Fadi and their eight-year-old son, Eass. Although Haick no longer practices karate, he walks six kilometers each morning before work.

He said that he shows people what he’s done and demonstrates by his own experience. As a Christian Arab Israeli, he doesn’t want to be a role model only for a certain population.

“I try to be a role model for excellence as a human, not as an Arab. I have a humanistic concept. I look for excellence. It’s the umbrella that defines all of us.”

How did his childhood and his family’s economic hardships influence him?

“I remember as a student, I always thought, ‘How will I survive?’” Haick said. “I don’t worry about that now. But I can’t forget where I’ve started from. In terms of humanity, I think of those who don’t have the means. I’m always thinking how I can contribute to the health of people.”

Then he paused. “We have to dream but dream realistically. You need a work plan. The work plan has to be realistic in terms of time and cost. There are competitors, and if you don’t catch the train you will miss something.”

As an educator, Haick wants to reach as many people as possible. He developed the Technion’s first massive open online course (MOOC) in English and Arabic. Since 2014, more than 540,000 people from around the world have participated in the course.

He said that he tries to encourage students to “understand the gaps that currently exist. The more you know about a topic the better it is. Filling in the gap is called invention. That’s the idea and the dream.”

Scientist should not be isolated in the lab, he said. “It’s much more important to influence the public and the next generation.”

UNCOVER ISRAEL - Get the ISRAEL21c
Weekly Edition free by email
Sign Up Now!
Bring Israel's story to life.
Millions of people around the world rely on us to gain a deeper understanding of Israel. We are the trusted source for original content you won't find anywhere else.
You can make a difference. Donate today to support journalism that brings Israel’s story alive.
SUPPORT ISRAEL21c
Read more on:   Health, Technology, Hossam Haick, Technion-Israel Institute of Technology, Nanotechnology