Eli Mizrahi is changing the culture of the open-air marketplace, luring younger and more affluent shoppers. But the bottom line is still fresh food, he says.

Photo by Abigail Klein Leichman
Eli Mizrahi, seated, chats with a patron outside his Café Mizrahi in Machane Yehuda.

The notion of opening a bar to improve the neighborhood would sound suspect if it didn’t come from Eli Mizrahi.

But Mizrahi, 60, has spent decades “breaking his head,” as they say in Hebrew, to improve conditions for both merchants and working-class residents living adjacent to Jerusalem’s central open market, Machane Yehuda.

“At night it was dead here, with nothing to do,” Mizrahi tells ISRAEL21c while sitting at Café Mizrahi, one of his two enterprises in the marketplace. “A few bars bring new life. This bar is not for kids or drinkers, but for a more sophisticated customer who wants to sit and talk. There’s no TV and no loud music.”

Casino de Paris, Mizrahi’s latest venture, is owned jointly with Sha’anan Street of the popular Israeli band Hadag Nachash. Situated in an inner courtyard of Machane Yehuda, it’s named after an officers club for British soldiers that used to occupy the 1910-era building.

“After we came in, this neighborhood became much cleaner and better,” says Mizrahi. “I want this population to believe in itself. I want to help them increase their quality of life. I have good connections with the owners of the buildings, and we are working together.” He even paid to install soundproofed windows in a nearby residence.

Mizrahi grew up right near the market that is undergoing a renaissance today. His father sold nuts, spices and dried fruit in Machane Yehuda since 1952.

After high school, Mizrahi served a total of six years in the army’s intelligence unit. In 1985, his brothers and father recruited him to help expand the family business. Though he now lives in the Jerusalem suburb of Mevasseret Zion, he has been at the market every day since and buys all his family’s groceries there. 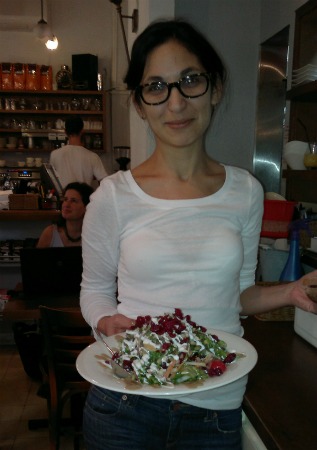 In 2000, he became chairman of the Machane Yehuda Merchants Association, a voluntary position that was practically a full-time job over the next decade.

At the time, the market was a sorry sight. About a third of the stores were closed and another third were in flux. Mizrahi says the municipality, not the intifada, was to blame, having invested in moving Jerusalem’s businesses from the center to new malls and commercial strips in outlying neighborhoods such as Givat Shaul and Talpiot.

“The city center is the most important place in our capital city,” Mizrahi says. “But they took out all the business and all the culture — movie theaters, everything — and it became a bunch of bazaars and coffee shops.”

Mizrahi, however, had leverage to reverse this process: The city was starting to plan its downtown light rail project — which finally opened this summer — and needed the cooperation of the businesses and landlords in the city center to make it happen.

“I said we would only cooperate if they renewed the market,” he recalls. Over the next two years, overseeing the renovations occupied much of his time.

“I became an engineer, an architect and a social worker,” says Mizrahi, who’s married to a special-education teacher and has two daughters and two sons ranging from 34 to 18.

“Today, everybody thinks there’s been a dramatic change in Machane Yehuda. But only the atmosphere and the buying habits have changed. The market is still based on food. All the new businesses that came in make up 10 percent of the 350 stores here, and they took the place of those that closed.”

In 2002, he opened Café Mizrahi, now managed by his daughter Moran. He brought in cultural events such as summer jazz evenings, which two years ago morphed into an annual Balabasta Festival of ethnic performances supported by the Charles & Lynn Schusterman Family Foundation.

Recently, the municipality brought in street artists to decorate the market, whose eateries use raw materials from the family businesses selling fresh produce, meat, fish, cheese, baked goods and spices. Mizrahi says the merchants always leave unsold produce outside so poor people can come by and glean it at the end of the day. But he wants to attract upper-class clientele as well.

“People didn’t think to come here because there was no place to sit and drink something while they were shopping. Now you can do that and you can buy gifts, too. We are bringing back our customers and bringing in a younger generation from the malls and supermarkets, step by step.”

Mizrahi reasoned that while chain stores could slash prices, they couldn’t compete with the marketplace’s character.

“Here the butcher knows you and knows what you want. These businesses go from father to son and you’re not just buying from a shelf. For fresh food, we are the best in the country at the best prices.”

Mizrahi wants all the retailers to band together into an official non-profit under a professional manager. “We cannot run it as a volunteer council anymore,” he says. “We want to develop better publicity and all the things a commercial market needs.”

His efforts to attract more fashion stores, book shops and art galleries are now fully supported by the Jerusalem municipality.

“I can imagine what would have happened if I hadn’t stepped in,” says Mizrahi, not shy about taking credit for reversing the fortunes of Machane Yehuda. “Some oligarch would have come and bought it for peanuts, and instead of this” — his arm sweeps across the bustling alleyways — “there would be tall buildings. I saved the market for the people of Israel.”

UNCOVER ISRAEL - Get the ISRAEL21c
Weekly Edition free by email
Sign Up Now!
Bring Israel's story to life.
Millions of people around the world rely on us to gain a deeper understanding of Israel. We are the trusted source for original content you won't find anywhere else.
You can make a difference. Donate today to support journalism that brings Israel’s story alive.
SUPPORT ISRAEL21c
Read more on:   Culture, Lifestyle, Israeli food and drink